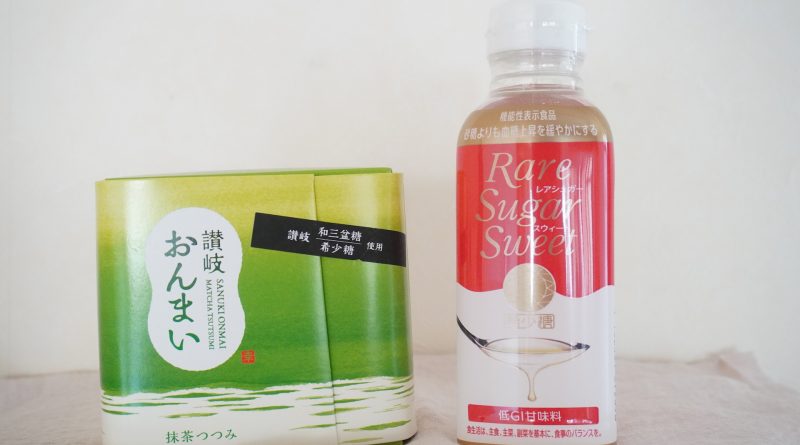 During your stroll in the shopping streets of Takamatsu have you noticed advertisements posted outside stores about some “Rare Sugar Sweet”?  Do you wonder why this sugar is called “rare” and how rare it is?

In Japan, the sugar industry began in the Edo period. It is said that the sugar used then was a coarse brown sugar until the Sanbontou (nowadays called Wasanbon sugar) was successfully produced for the first time in Kagawa prefecture in 1798. Since then lots of people joined the research to improved and developed sugar, and the Faculty of Agriculture at the Kagawa University is known as the most famous expert in this field. The most impressive result obtained by the research is the recently discovered rare sugar (希少糖).

Good news for people suffering from obesity and diabetes

Although sugar can easily satisfy people’s sweetness desire, it also quickly increase the blood sugar level, produce calories that is transformed into fat, one of the common factor of obesity and the basis of an unhealthy diet when it is not the origin of cavities.

Nowadays, “lifestyle disease” is a common problem in our society which gets worse and worse. The Dr. IZUMORI Ken, professor at the Faculty of Agriculture at Kagawa University, discovered by chance a kind of microorganism in the soil behind the restaurant of the faculty, which is, by its enzyme, able to transform fructose into D-Allulose (also called D-Pisicose). The D-allulose is a natural sweetener with a sweetness level slightly inferior to normal sugar (30% off), however, got only 0.2~0.4 kcal/g calories that is far below the normal sugar calories of 4,000 kcal/g.

For a long time now, the diabetic figures of Kagawa prefecture were high and the numbers of people who died because of diabetic complication was every year in the top ten in Japan. The rare sugar may be a great news for the fight against those two diseases: diabetes and obesity.

A difficult sugar to obtain

D-allulose can only be extracted from a few plants and was at the start of research found in wheat and common fig. However, the amount of D-allulose is plants compare to the amount of glucose is “rare”. Moreover, there are only some natural materials that can be processed into D-allulose using biotechnology. These are the reason why Dr. IZUMORI Ken named this sugar: rare sugar. Afterwards, the Association for the Popularization of the Rare Sugar redefines that all monosaccharides present in rare quantity in nature should be called “rare sugar”.  Nowadays, it is more than 50 kinds of rare sugar that have been found in nature, composing the mere 1% of all kinds of sugar.

Recently, the cooperation between the local industry, the government and academia,  offers to the team of the Kagawa University the chance to successfully develop a method to produce rare sugar using extraction, and the yields are sufficient to provide experiments to the researchers.

With his research, Dr. IZUMORI Ken obtained many important results about the functions of D-allulose. According to the report, “rare sugar” is able to suppress the increase of blood sugar level just after the meal and avoid fat accumulation. The evidence also shows that the “rare sugar” is not only a natural sugar but also one of the healthiest.

There are about 300,000 plant varieties on Earth, and among then the Dr. IZUMORI Ken found a wild plant called Zuina, its scientific name is Itea, which grows on the mountain of Mikicho (三木町) in Kagawa prefecture. This plant is one of the richest in D-allulose, therefore to pursue his research the doctor planted in mass the Zuina. In 2007 the Sannan (山南) farming association in Mikicho Komino (小蓑) area started cooperating with the Kagawa University and founded the Izumori Co.Ltd., in a local abandoned school. They hired 60~80-year-old elders to help them planting Zuina. This group is locally known as the Komino Zuinars(小蓑ズイナーズ). As the population is ageing and the emigration is increasing in this area, the farm does not only help elders to focus on a common life target but also promotes the local economy.

The rare sugar in our daily life

Fortunately, D-allulose has a derivate called “allose” which is also a rare sugar and which has a sweetness level only 20% off the normal sugar with low calories. Some reports indicate that allose is effective as an anti-oxidative and to suppress hypertension. The rare sugar is not a simple substitute to common sugar as a sweetener, its also a natural produce participating to our daily health.

Recently in Kagawa, lots of cake shops have launched products in which they replace sugar by the healthier rare sugar. For example  the “Sanuki onmai”(讃岐おんまい) from the sweet shop Löwe, both “Shizenimoyaki”(自然薯焼き) and “Oyatsumadorenu” from Aina Florian, the Setonomegumi(瀬戸のめぐみ) from the Cafe Cafe Konditorei & Rest Shika, and the “Rare sugar warabimochi”(希少糖わらび餅) from the shop Kanesue (かねすえ).

Served really cool the “Rare sugar warabimochi” topped with kinako (roasted soybean flour) is without doubt the best dessert for the hot summer days. Compares to the common warabimochi, the one using 100% of rare sugar is lighter, of course, healthier and you can taste a little honey-like flavor in the mouth.

Besides, in the Kagawa prefecture, you can find drinks and seasoning made of rare sugar in supermarket and convenient stores. When you come to visit Kagawa, do not forget to check the ingredients on the package and choose the healthiest and safest dessert with rare sugar!