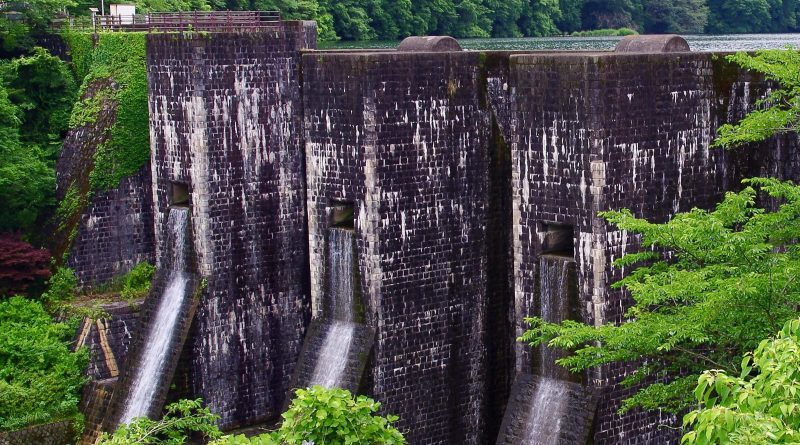 Because of its topology, Kagawa prefecture has never been bound with abundant rainfall, and the rivers in the area run short with a rapid flow. Therefore, locals built lots of reservoirs to irrigate the farmland. At Onohara-cho in Kanonji city, droughts severed repeatedly the region before the Honenike Dam was finally completed. There were two serious droughts in 1893 and 1894 that especially bring awareness to the importance of the construction of the modern reservoir.

The Kagawa prefecture government leading the project made a plan to dam the river from the upstream of the Kunitakawa river. In 1926, the director Mr. SANO Toujiro, doctor of engineering, built a team involving the local farmers. To palliate their lack of engineering knowledge and experience, the farmers made great efforts in joining evening classes, conferences, and workshops to efficiently work on the construction site. In 1929, through the collaborative work of everyone,  the 145-meter-long and 30-meter-high masonry dam was completed, the team only spent 3 years and 8 months to successfully finish the titanic construction. The new dam not only solved the local irrigation problem it also became the second biggest water reservoir of Kagawa prefecture, behind the Manno Lake built by Kobo Daishi.

First named Tanonoike Dam, because of its location, the reservoir was then renamed by the Minister of Finance Mr. Mitsuchi Chuzou who was born in Ochigun in Kagawa prefecture (the Higashikagawa city nowadays) to its actual name Honenike Dam, hoping this dam could bring bumper harvest to the Onohara’s farmlands which have been suffering harsh droughts.

Thanks to its high storage capacity of about 159 cubic meters, Honenike Dam could irrigate nearly 530 hectares of downstream paddy fields, assuring great harvest to the local farmers.

Before Honenike Dam, Japanese dams were usually built following traditional techniques employing soil and stone. However, because there was no proper soil to use for the construction in the Onohara area, the workers decided to use concrete which was a new material at that time.

To built the dam’s body, concrete was mixed with local-mined rubble stone and mortar. About 150 thousand people joined the project, mining stone in the valley and sand at Tohoyama and Kaiganji, and transporting all the materials to the construction site using oxcart and horse caravan. Even though the construction staff was made of amateurs without engineering works’ experience, no one died during the whole construction process.

During the building process, the team discovered that the bedrock was far deeper than predicted. Mr. SANO Toujiro then adjusted the design construction, switching to a multiple-arch dam, again one of the newest techniques of his time.

Arch dam is a kind of dam which uses an arc-shaped body to block water. It only uses a small amount of concrete so the outline is slim and thin. About the dam’s body, the convex surface should face upstream and the concave surface faces downstream so that it can disperse the water to the sides.

Because the dam connects lots of arch cutoff walls and parapet walls, it is also called “Concrete Arch Dam”,  and its shape disperses the water pressure to the parapet walls.

Nowadays, there are two preserved Concrete Arch Dam in Japan. One is the Okura Dam, located in the Miyagi prefecture and completed in 1961, a Double Concrete Arch Dam with two arch cutoff walls. The other is Honenike Dam which has five arch cutoff walls and is also the oldest masonry multiple‐arch dam in Japan. Because of the special shape and the immeasurable architectural value, Honenike Dam is registered as a National Important Cultural Property by the Japanese government since 2006 and is also listed as one of the best 100 reservoir views by the Ministry of Agriculture, Forestry, and Fisheries. Moreover, it is also recorded as one of the best 100 “Heritaging” (Japanese heritage in modern time) and one of the best 88 views of Shikoku.

In 1994, the Honenike Dam got obsolete so the renewal process began. The government kept the shape and scenery, and also cleaned the surrounding. The Honenike Dam is no more only a reservoir, as its riverbank park is now suitable for a stroll, and visitors can even enjoy the flood discharge scene in summer.

The monument beside records the Honenike Dam’s history and the renewal process done during the Heisei period.

As you go into the forest, you will find an old water gate which had been removed during the repair process and preserved here.

Going along the trail to the dam top, you will pass an old gunpowder storehouse here.

The monument at the dam top records the dam’s construction process and the names of the related technique staffs. The carving of paddy, wheat, and birds symbolize the great harvest hoped from the dam construction. Of course, the old water gate, gunpowder storehouse, and the monument are also part of the National Important Cultural Property.

The majestic Honenike Dam is like a medieval castle standing between mountains and valleys. In summer, it attracts lots of tourists coming to enjoy its spectacular flood discharge scenery. If you love heritages of engineering works, despite rather poor access, Honenike Dam would be a great spot that you should not miss.

Access: Take 25-minutes taxi or 1-hour bus from JR Kanonji Station. About the bus, please take Gogotakamuro line (五鄉高室) to Tanono stop (田野々）. It will be helpful to inform the bus driver that you would like to go Honenike while boarding. There are only two buses a day, please be careful with the time. Bus Timetable。