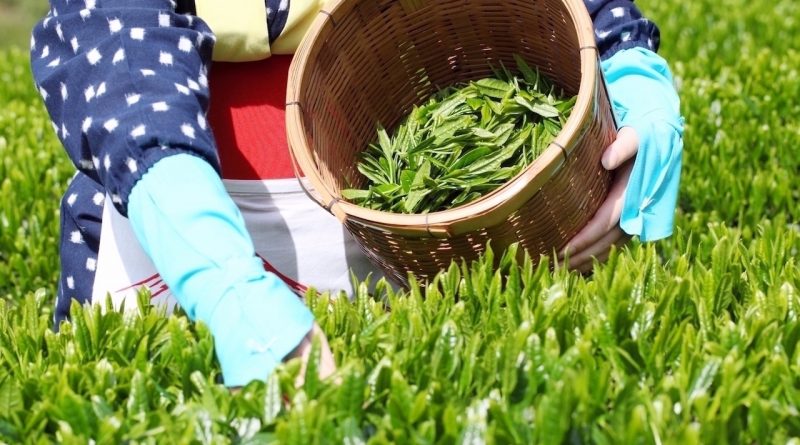 The first traces of tea culture in the Kagawa prefecture can be found in the 17th century, when the first lord of Takamatsu Domain, Matsudaira Yorishige, built a tea place in order to hold his tea party. The tea plantation was cultivated where now stand the well-known Ritsurin Garden. Nowadays, the tea plantations are concentrated in the mountainside of Takamatsu city, Mitoyo city, and Manno-cho, where Yabukita (藪北) and Meiryoku (明綠) species are mainly produced. 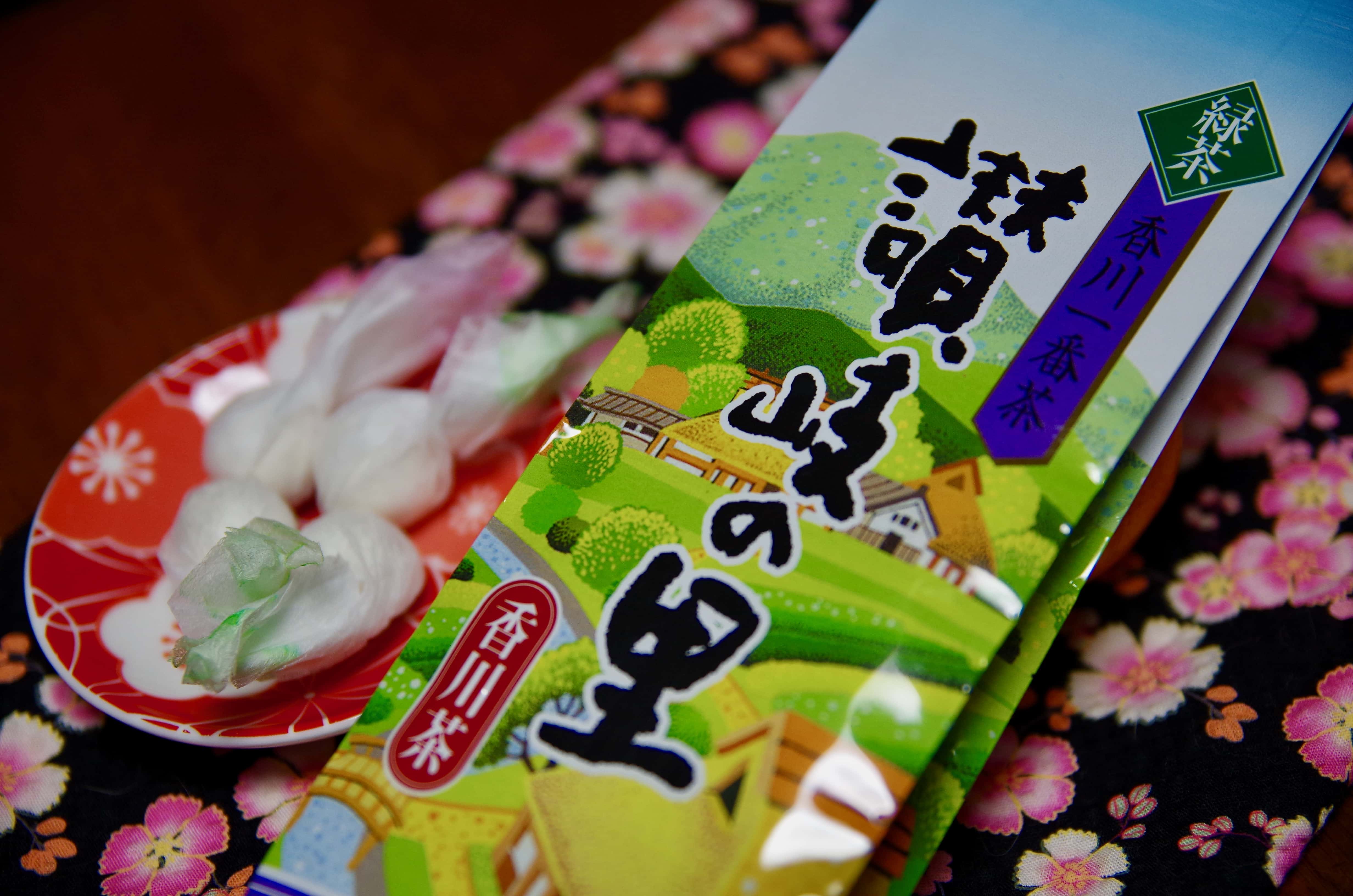 In Kagawa prefecture, tea leaves are harvested 3 to 4 times a year. The first harvest occurs from late April to early May, the tea produced is called Ichiban-cha (一番茶), the first tea, or Shin-cha (新茶), the new tea. You may have heard of them before, don’t you? The second harvest, Niban-cha (二番茶) -the second tea- happens between mid-June and the end of June. Then comes the Sanban-cha(三番茶), the third tea, at the end of July. And last but not least the Yonban-cha (四番茶) is harvested from September to early October, because the leaf picking happens between autumn and winter people also call it Shutoban-cha (秋冬番茶), the fall-winter tea. 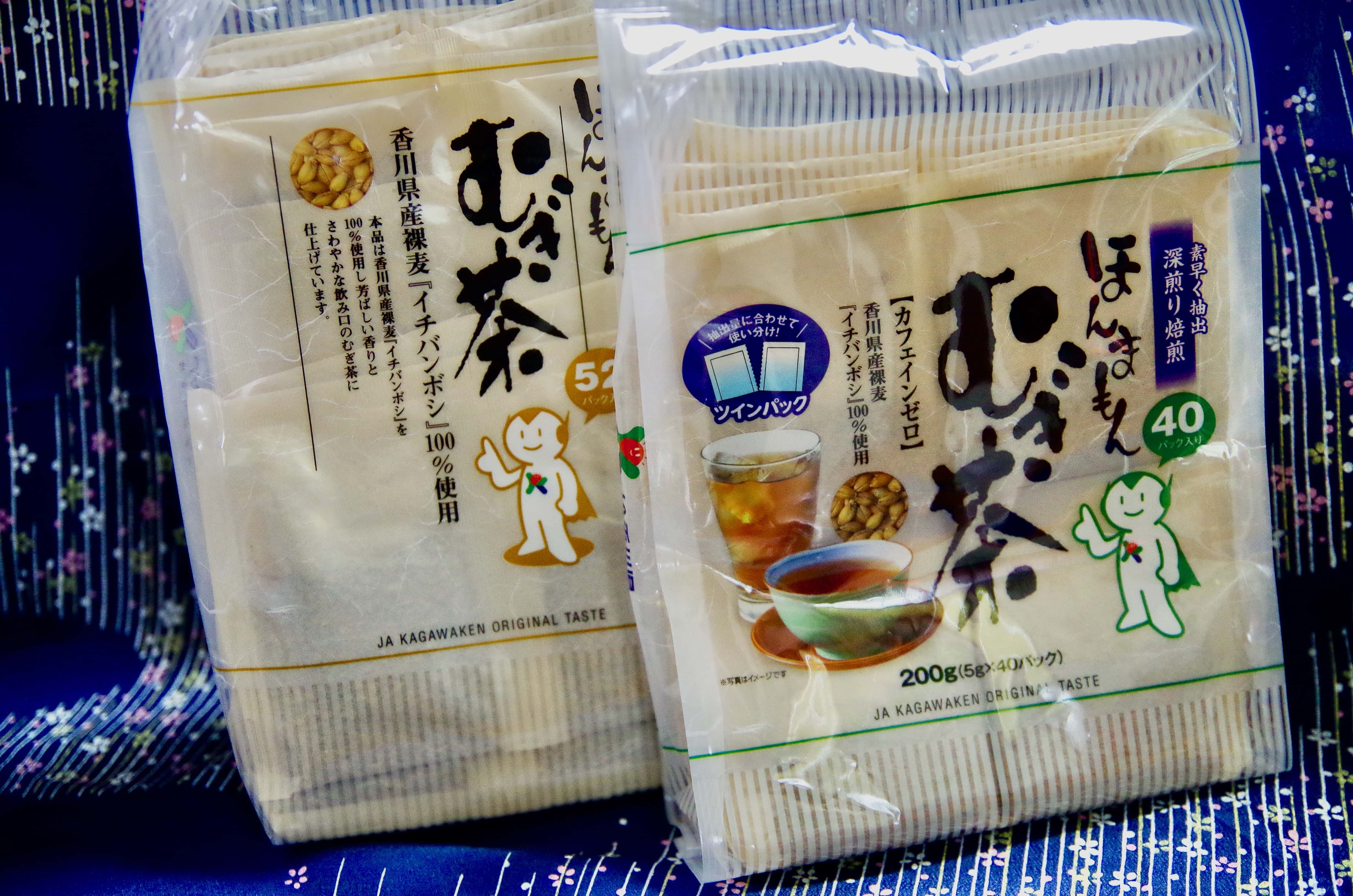 The new tea has a fresher and mellower taste, and the later you harvest the leaves the more they are charged with catechin and caffeine which directly impact the presence of the tea in the mouth. The Japan Agricultural Cooperatives of Kagawa prefecture create a series of products named Honmamon Ryokucha (ほんまもん緑茶) which is brewed with 100% of Ichiban-cha to insure the freshest and mellowest taste. The products include green tea, barley tea, but also packages of tea bags and bottle of tea, to satisfy any tea lovers of Kagawa.

The most famous green tea cultivated in Kagawa is the Takase-cha (高瀨茶) or Takase tea, produced in the Ninomiya area of Takase-cho in Mitoyo city. Takase-cha production represent the mere 0.2% of all Japan production of green tea; however, it is about 60% of the Kagawa production. Therefore only the locals can enjoy this rare product.

The Ninomiya area, located in the southern part of Takase-cho, is a hill where once tobacco and sweet potatoes were cultivated. However, about 1950 the locals discussed a plan to create specials local products and promote their own little village, they finally decided to go on with the tea plantation as their main project.

Ms. Miyazaki Iwami (宮崎岩美) who learned her skills of tea planting as an intern in a tea farm in the Shizuoka prefecture, became the leader of the project. Beginning in 1956 all the tobacco fields were transformed into tea fields, and the plantation expanded up to the mountains.

In 1958, the tea produced by Takase-cha got the “Minister of Agriculture, Forestry and Fisheries Prize”, the best award of the Kagawa tea contest it has been submitted. Afterwards, Takase-cha continued to be rewarded for the Shikoku tea contest in 1961 and the Kansai tea contest in1965, expanding its name and fame.

While everything was going smoothly, the Takase-cha farm suffered severe damages during the drought of the 1962 summer, which caused the wither of about 10 hectares of plantation. Until 1975 the government supported actively the tea farmers to improve the sprinkler irrigation system so the production would be stable. 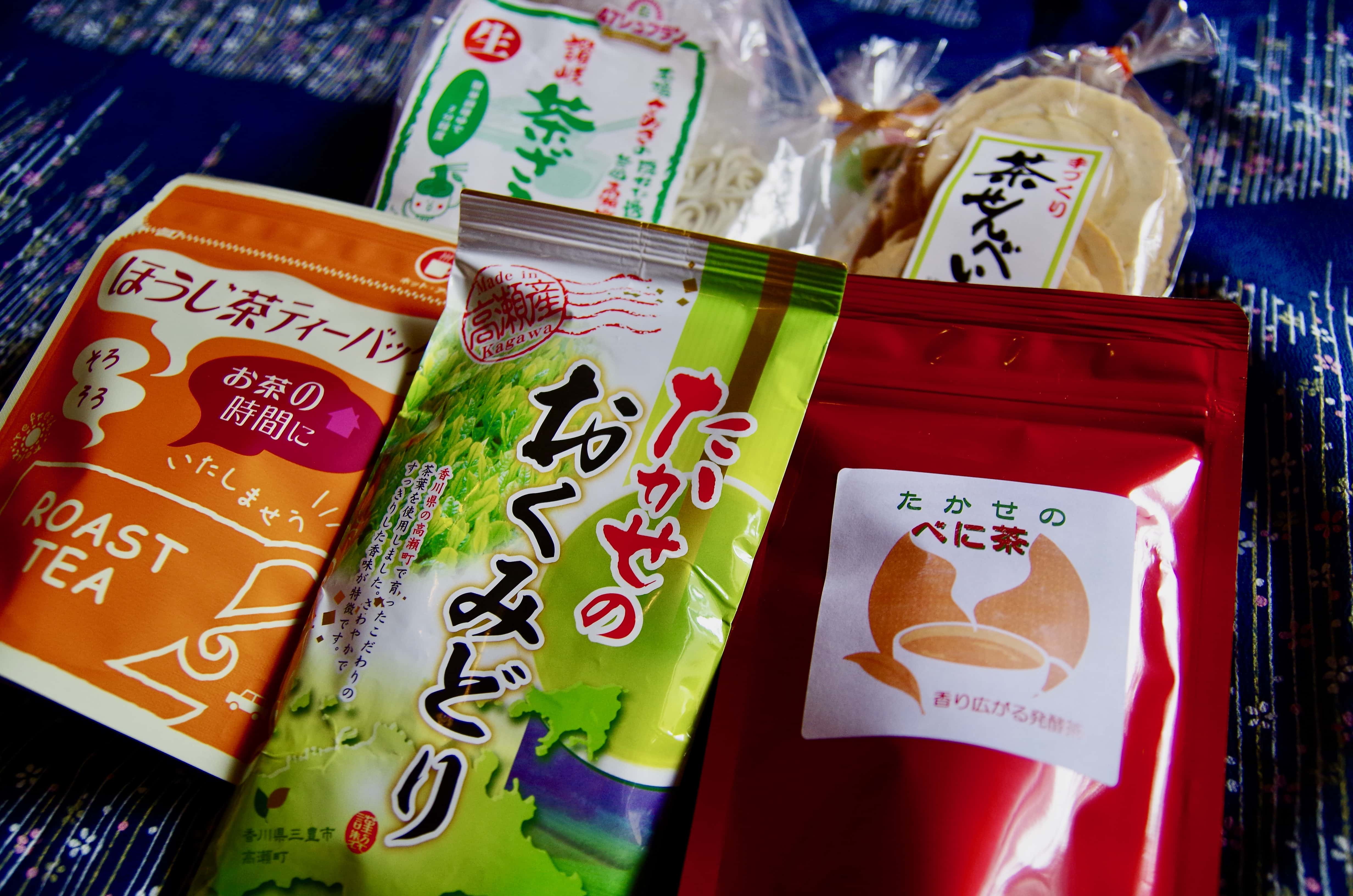 Today, Yabukita (藪北) tea is the most planted variety of all Japan, known for its sweet tartness taste and rich fragrance. Besides Yabukita variety, Saemidori (冴綠) and Okumidori (奧綠) are the two main planted tea breeds in Mitoyo city. The harvest of the Saemidori variety comes earlier than Yabukita by 4 to 7 days, and it is recognized by its elegant smell, lighter tartness and sweet taste. The Okumidori variety in another hand is picked later than Yabukita by about 10 days, its fresh taste is the signature.

To summarise, good balance in the mouth, light tartness and rich taste, sweet flavour and high fragrance are the four pillars of the Takase-cha’s teas. Besides their Shin-cha in spring, the Hiraban-cha (平番茶) picked during fall and the fermented Beni-cha (ベニ茶 ) are popular. Some stores also try to diversify their line of products to satisfy consumer by using the Takase-cha tea powder to make rice crackers and soba noodles, or even sweet buns like the “drop of tea (茶のしずく)” just launched in October 2020. 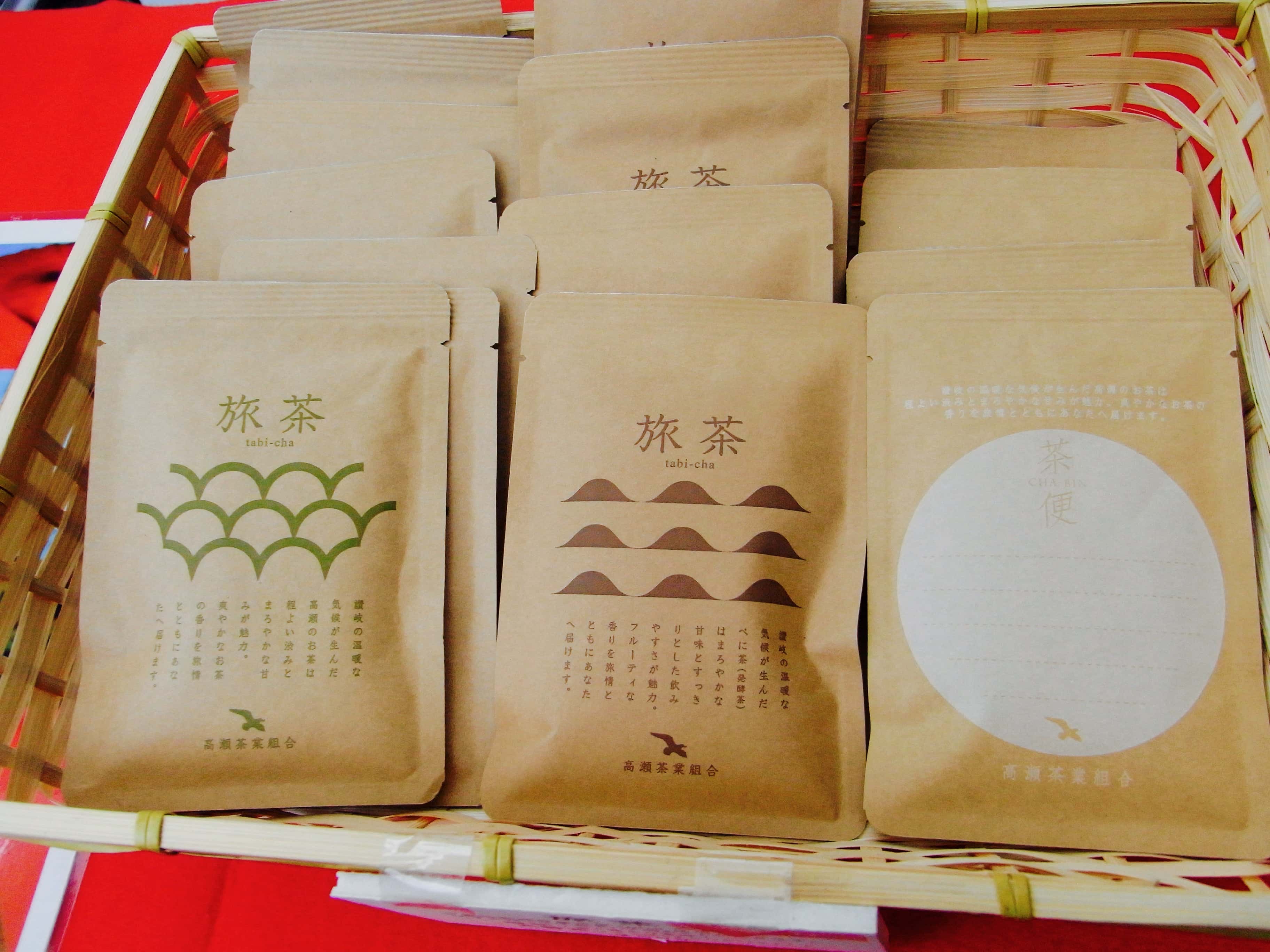 Including the Takase-cha association (高瀬茶業組合) in Mitoyo city ( 三豐市) and the Imayarouho (今屋老舖) in Kanonji city (觀音寺市), you can also find Takase-cha products at the Ritsurin-an (栗林庵) just beside the exit of Ritsurin Garden. During your visit, try to enjoy the fresh green tea of Kagawa prefecture, and why not make a tea lover happy and bring back some tea with you!