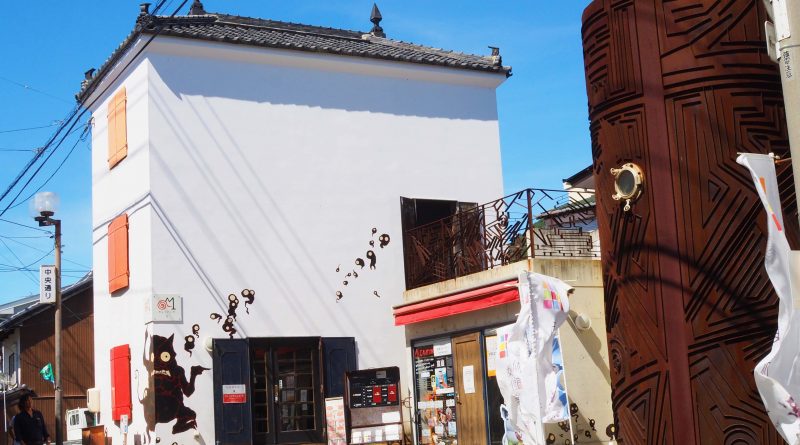 In Japan, Yokai can be divided into three groups: Yurei (ghost), Yokai (monster), and Obake (monsters who have the ability to shapeshift). The father of Japanese native folkloristics, Mr. Yanagida Kunio, regrouped some common traits about Yokai like: even if they are kind to appear at the same place, it is not likely that their prey is decided, and they show their selves once the day as fade. 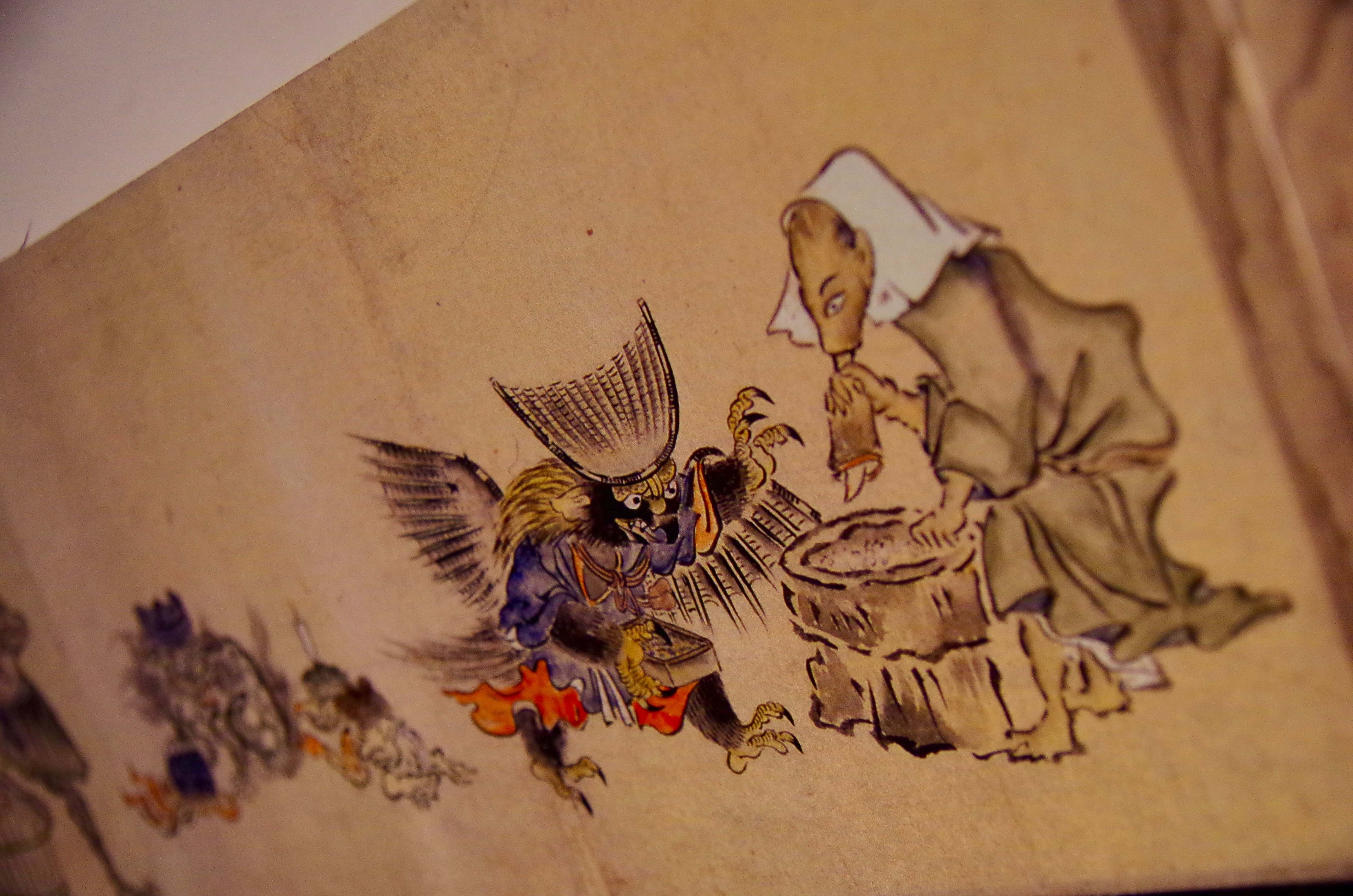 Yokai used to be shaped from natural phenomenons that villagers could not explain, fear or respect. Traditionally, Yokai live in the countryside with nature and few people. For example, “Kappa” live beside the river or paddy filed, and “Tengu” live in the mountain. 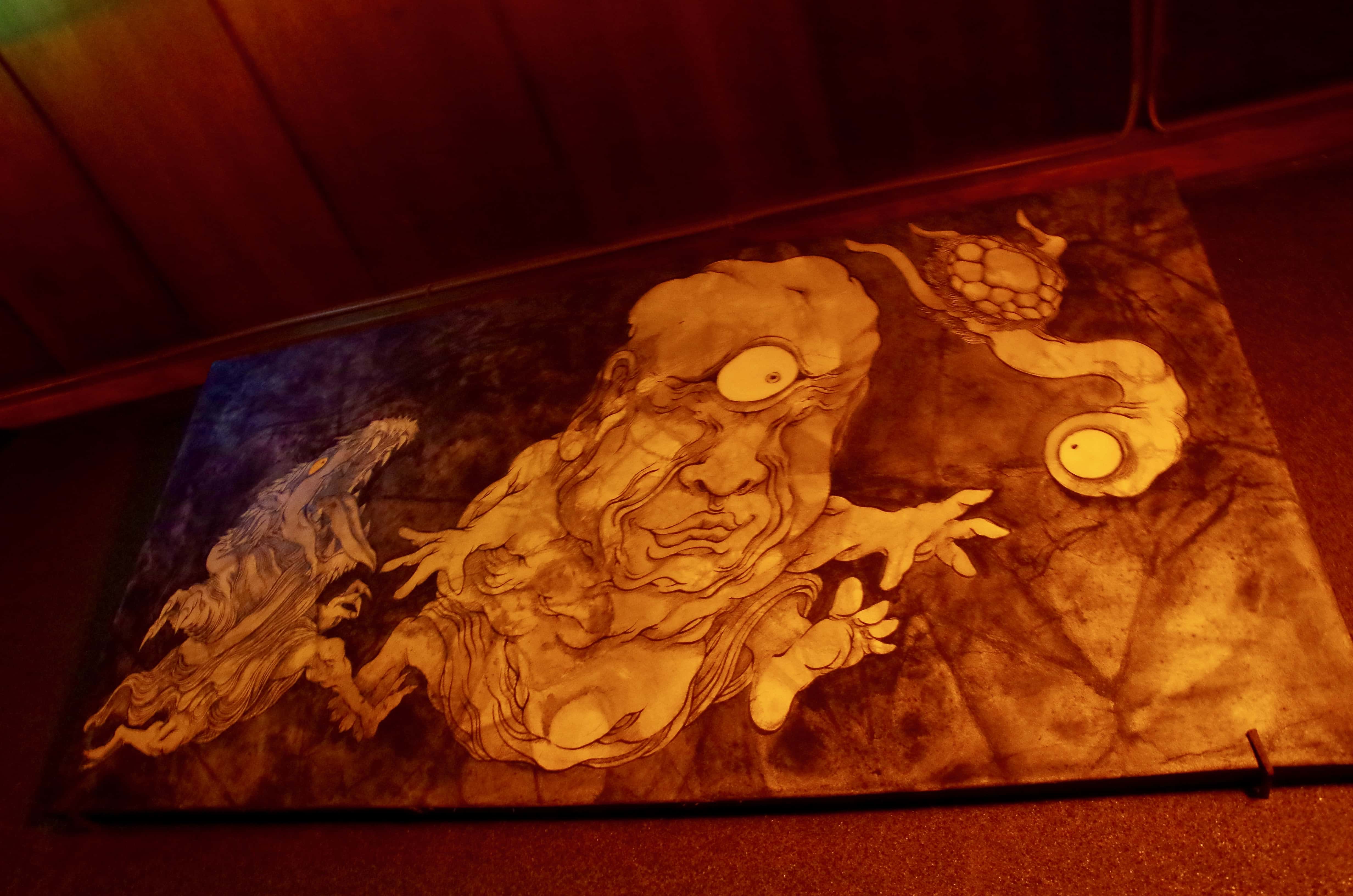 As time goes by, the Yokai who once was living beside humans started to appear in their every daily life.  During the Edo period, people started to broke superstition and the Yokai once feared and respected became the source of entertainment. The Yokai culture then developed quickly. For example, the illustrated reference book of Yokai, Gazu Hyakki Yagyo (画図百鬼夜行), drawn by Mr. Toriyama Sekien, introduce the general idea of Yokai with their particularity and to grab the curiosity of the public by turning them into simple characters.

The Nanboku-cho period was a confusing time in Japan’s history. To escape from the bombing during the war and prevent any raid from the Pirates who were sailing on the Setouchi Inland Sea, the inhabitants of Tonoshi Honmachi near the Tosho Port of Shodoshima in Kagawa, designed the village roads as a maze: easy to get in but impossible for any outsiders to find the exit. Nowadays the place becomes famous under the name “Meiro no Machi迷路のまち”, literally the maze-village. 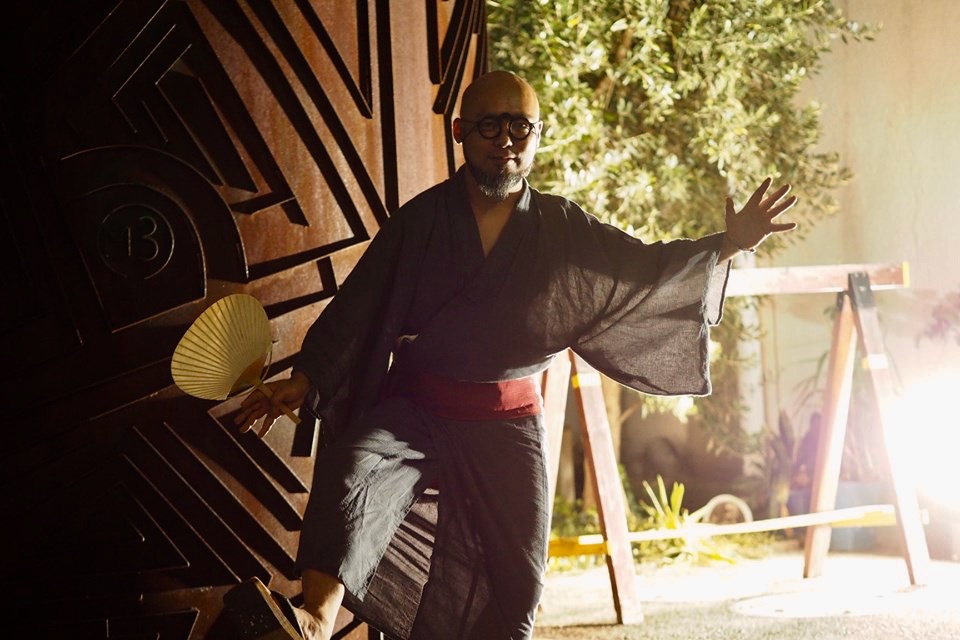 The actual director of the Yokai Art Museum and Yokai painter Mr. Yagyu Chubei, founded the museum using the “Meiro no Machi” and divided the exhibition into five old houses with particular ambiance.

The museum introduces Japanese and overseas 3D artworks. Every exhibition displays a few hundred pieces; however, the full collection owned by the museum is about eight hundred. Therefore there are no rules about which art would be shown when you visit, but you can be sure that each visit would be unique!

Room No.1 – Introduce the origin of Yokai

Before you enter the museum, it is recommended to download the special application on your smartphone at the ticket office. This application is available in three languages: Chinese, English, and Japanese. Using the device visitors can learn more about the history of each Yokai and will also get more into their tour as sounds and background music accompany the visit. 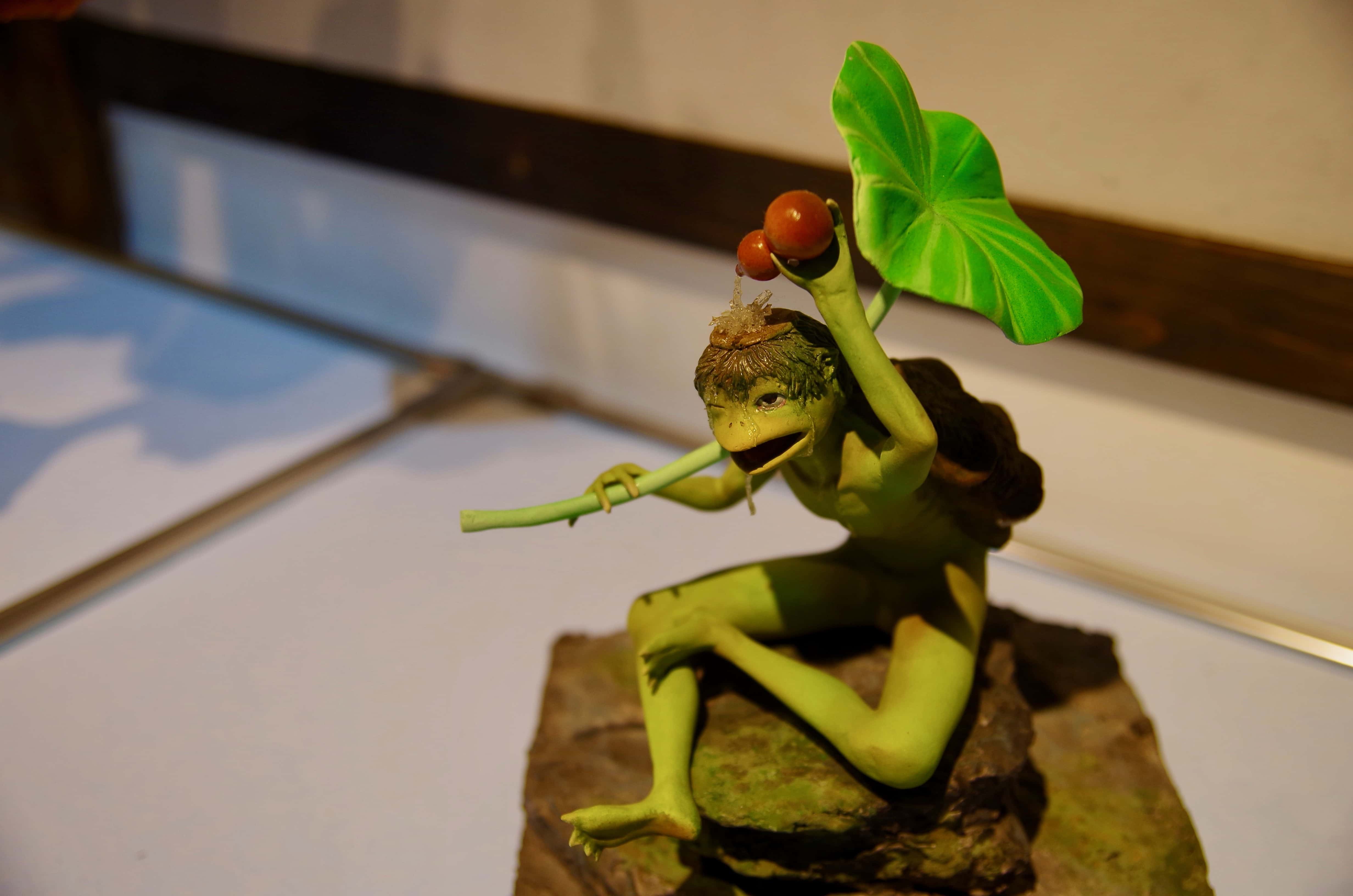 The room No.1 of the Yokai Art museum reuse an old kimono store. Here are displayed Yokai with long history designed in a modern way. The Yokai introduced in this room are commonly known, like the famous Kappa, and using the audio guide you will be taught more about their origin.

Go through the pathway outside, and take the stairs down to the exit, next to the door sit a Kabaso, a traditional Yokai from Shodoshima, seeing off the visitors. Believe me, it will scare you enough to get cold sweat running down your spine. Totally different from another river Yokai named Kappa, Kaboso is an otter who has been evolving into a Yokai, looking horrible and startling people. 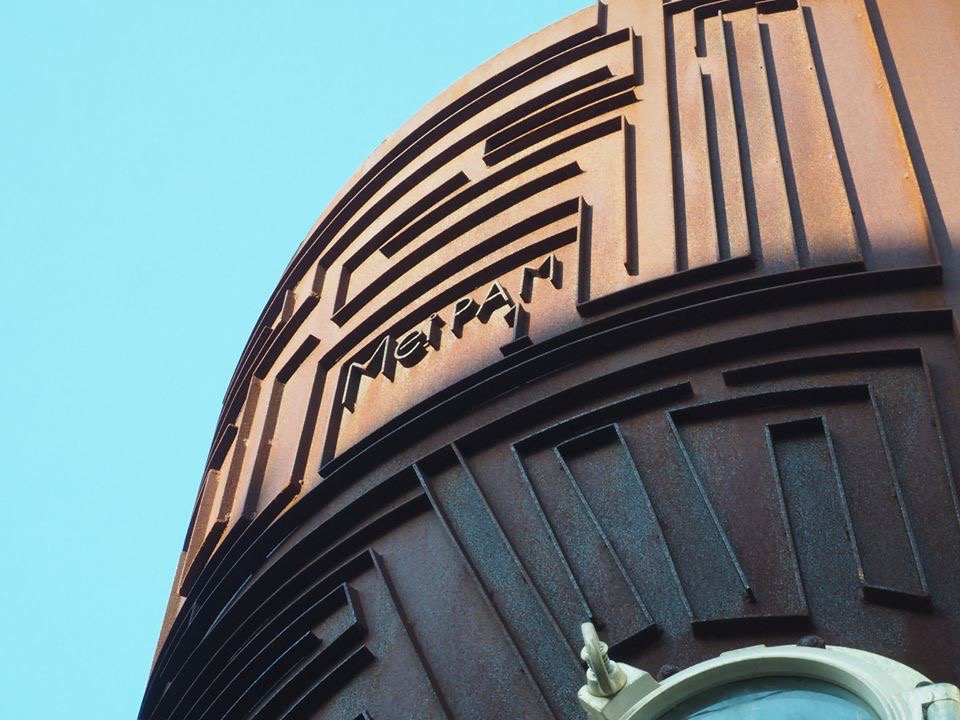 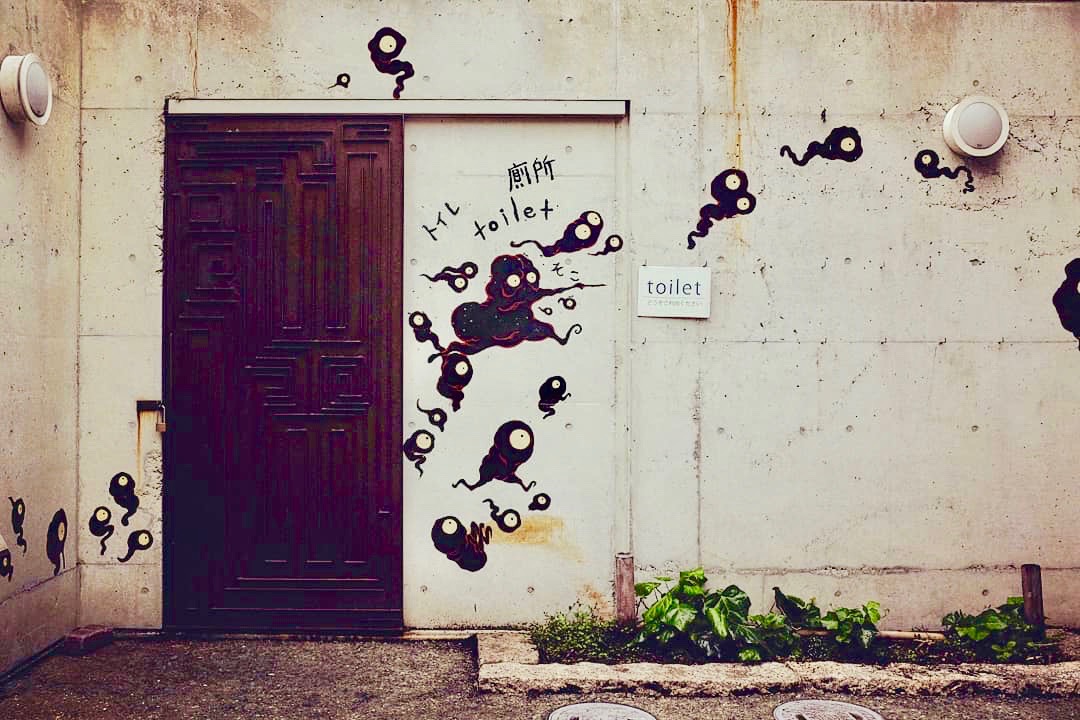 Besides the exhibition room No.1, there is the circular architecture outside which is also an artwork named “HEISEI MAZE SPIRAL” and includes the fence above and the door of toilet. The work looks old and rusty; however, it perfectly represents the map of “Meiru-no-Machi” and the olive leaf which is the symbol of Shodoshima. Additionally, the characters “迷路”(maze in Japanese) are written on the toilet’s iron door. When you are visiting the museum try to find it!

Room No. 2 – The giant abandoned Yokai

The former building of Room No. 2 was a soy sauce warehouse. 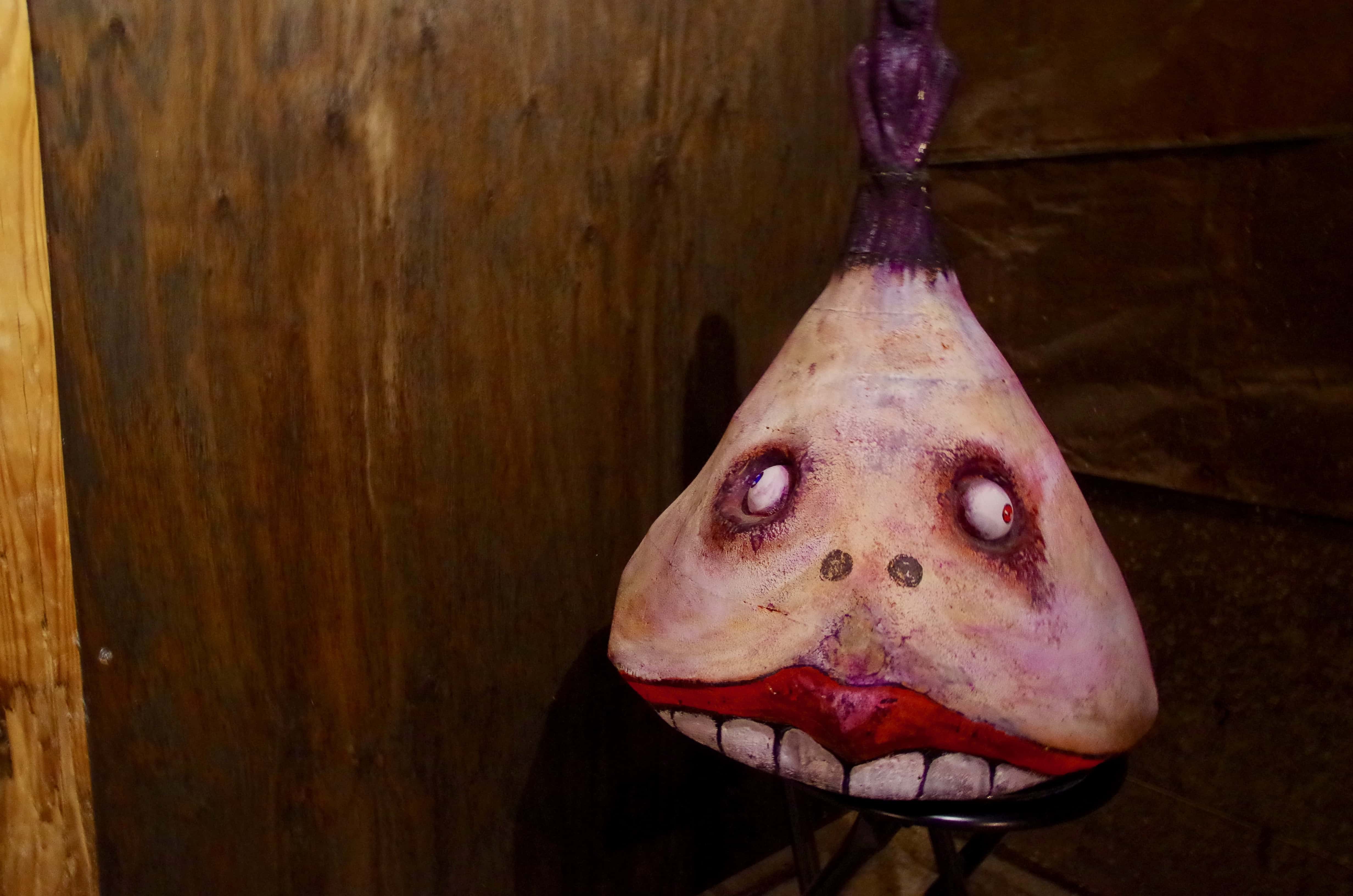 Once you enter the door, a 4-meter-tall giant Yokai artwork appears in front of you, and a small size version stands beside it. You can also find a Japanese doll standing on the beam creating some mysterious atmosphere.

This giant Yokai was once an abandoned kotatsu (Japanese foot warmer), who now eats the visitors one by one in one mouthful because of feeling lonely. Walk into the Yokai’s brain and look through its nostrils, it seems that you have been eaten by the Yokai and are seeing the world from the Yokai’s body. 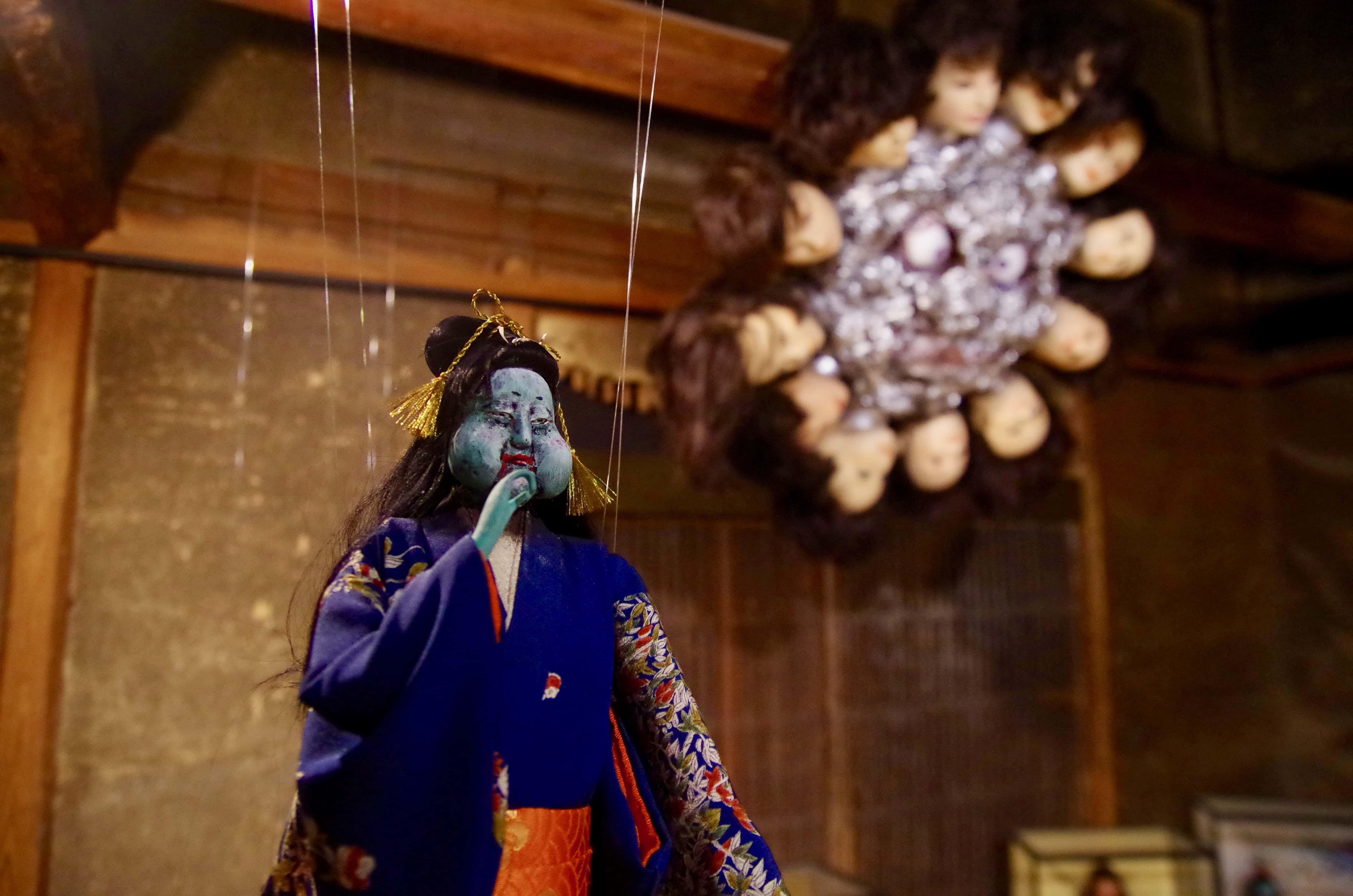 There are also lots of horrible traditional Japanese dolls standing at the corners of the warehouse. Do not try to make eyes contact with them are watch them to persistently otherwise you may not be able to sleep this night!

The room No.3 is located on the second floor of Mononoke-do (モノノケ堂) which is a shop selling dagashi (駄菓子, cheap candies and snack foods) and Yokai goods. The works exhibiting here are parts of works which was awarded at the “The Yokai Sculpture Contest”. 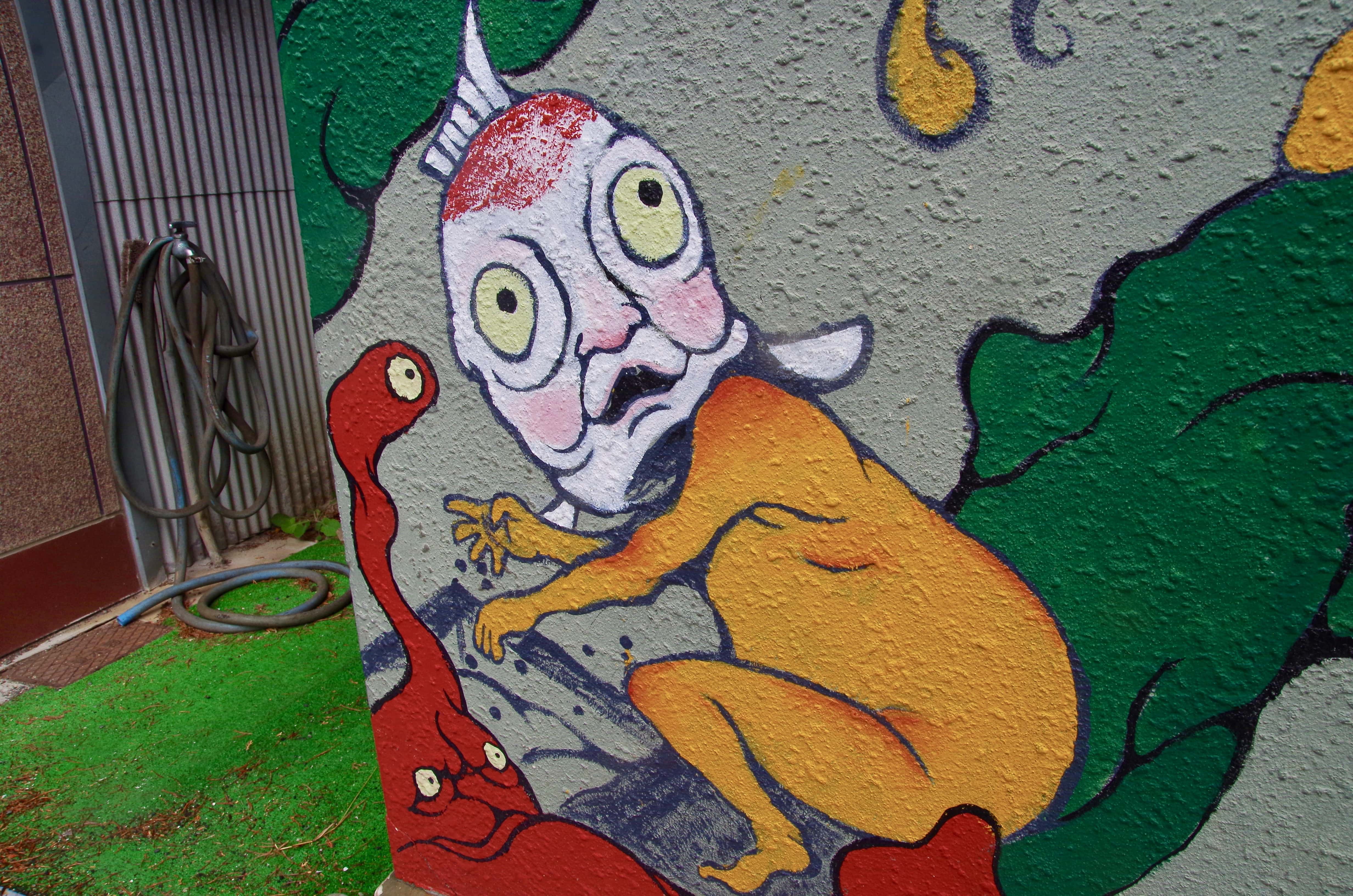 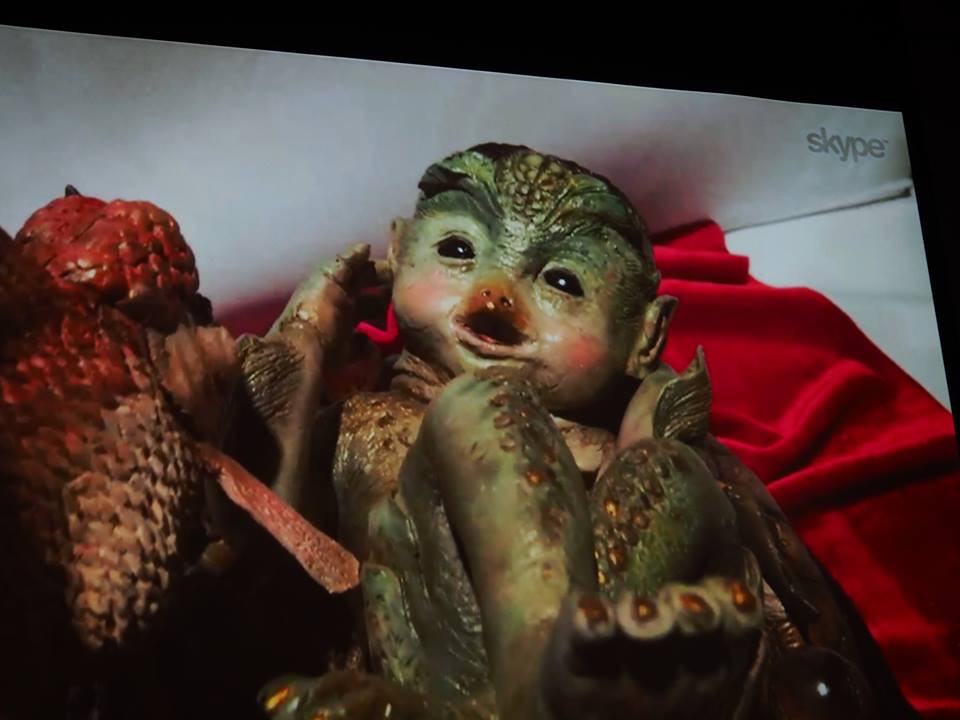 Jingzhe, the picture above, is an artwork made by a Taiwanese contestant Mr. Liu, Yu Huan (劉宇桓) who won the best award in 2017. This work vividly represents the moment that the spring thunderstorms awakening of hibernating insects. 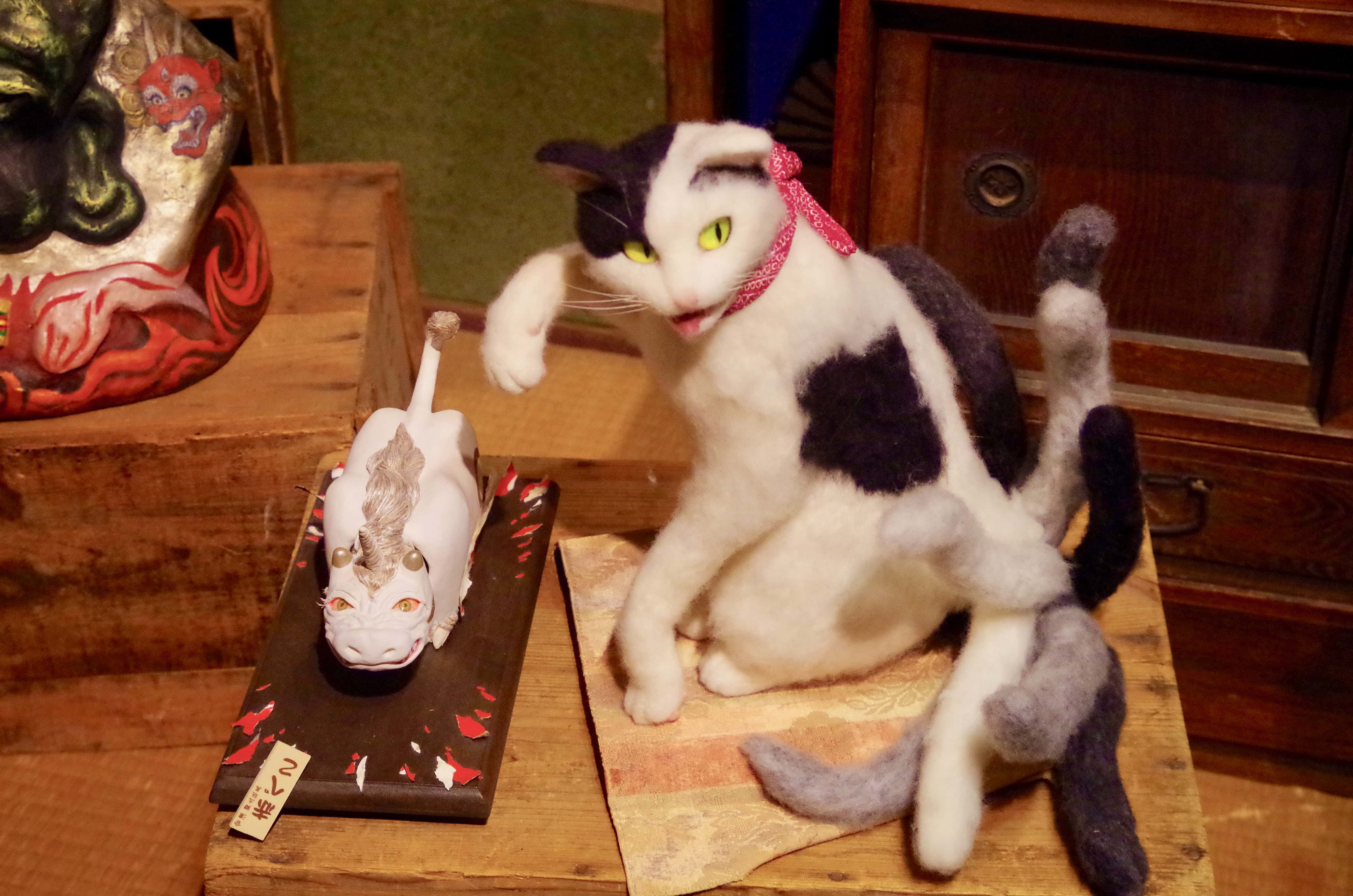 Room No.3 was once a letterpress printing factory, and there is a Japanese‐style room inside with lots of Yokai displayed as they are planing some important event. Take off your shoes, get into the room, and sit beside the Yokai, it’s more interesting to listen to what they discuss instead of feeling scared.

Room No.4 – feeling threaten by sights coming from all directions

Go upstairs and get into the dark Room No.4. Here is the only place exhibiting Mr. Yagyu Chubei,  the museum director, graphic artworks. 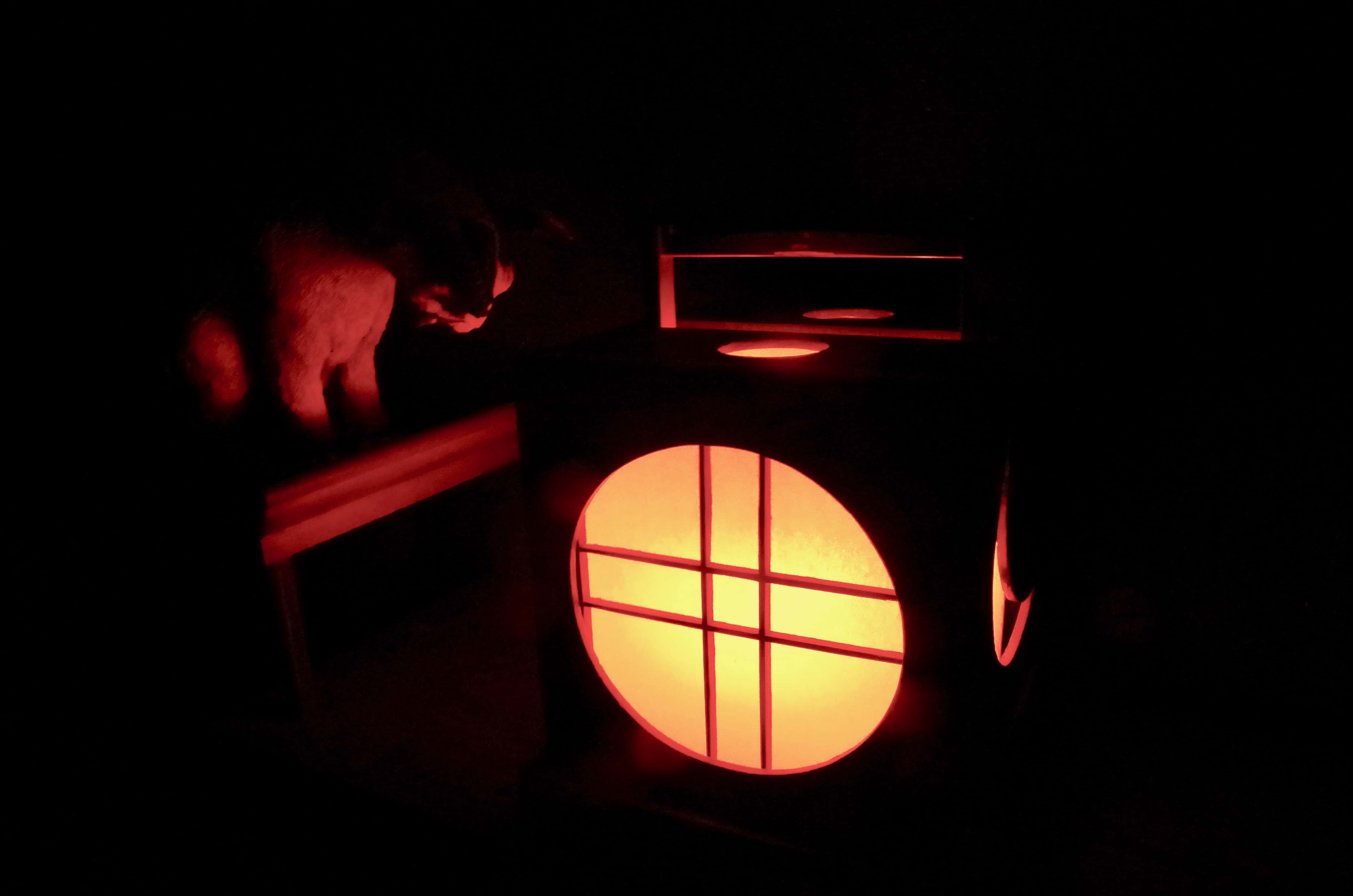 Following the advice, just get rid of your nervousness and lie on the tatami. The room is so dark that it is barely possible to see your own fingers when you extend your arm. Getting used to the darkness, you will start to distinguish the ceiling. Suddenly, the feeling of being watched by somebody grows in you. However, the curiosity overcomes the fear, and push you to stand and search for the eyes staring at you. 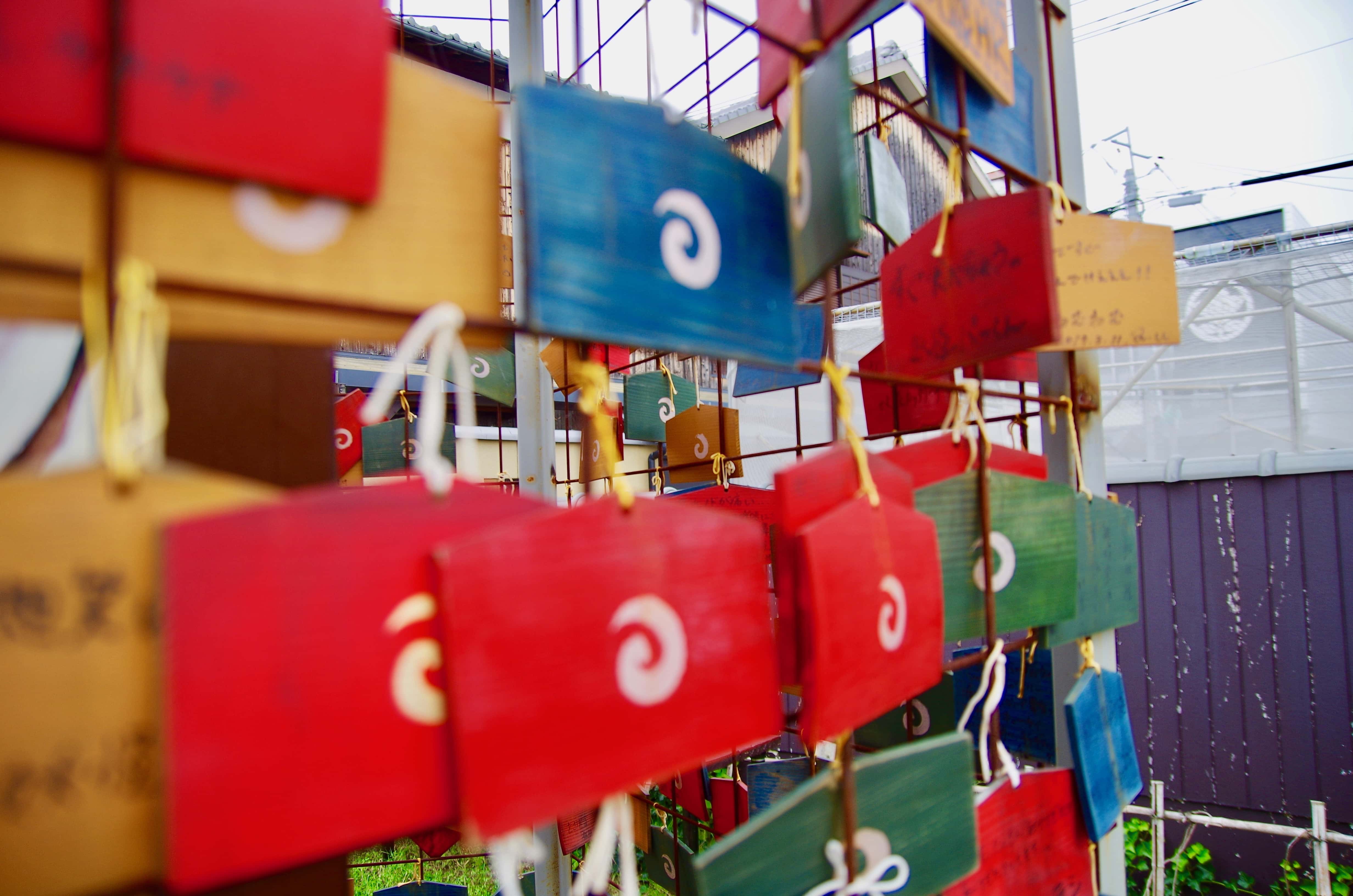 Outside of the Room No.4, there is a new Yokai manufacturing equipment named Chokeshi (チョーケシ). It is said that if people name their bad habits and write them on the ema (絵馬), they will gradually disappear.  Looking at the numerous ema hanging on the  Chokeshi, we are not the only ones hoping to get rid of our bad habits.

Room No.5 – a place fulfilled with memories about grandmother

The room No.5 was once a restaurant, and it displays now a special exhibition with the theme “grandmother’s house”. The first floor looks like ruins; however, as you go up to the second a strange yet familiar atmosphere filled the place. Although the grandmother passed away, it seemed that she left something behind her in this empty house. 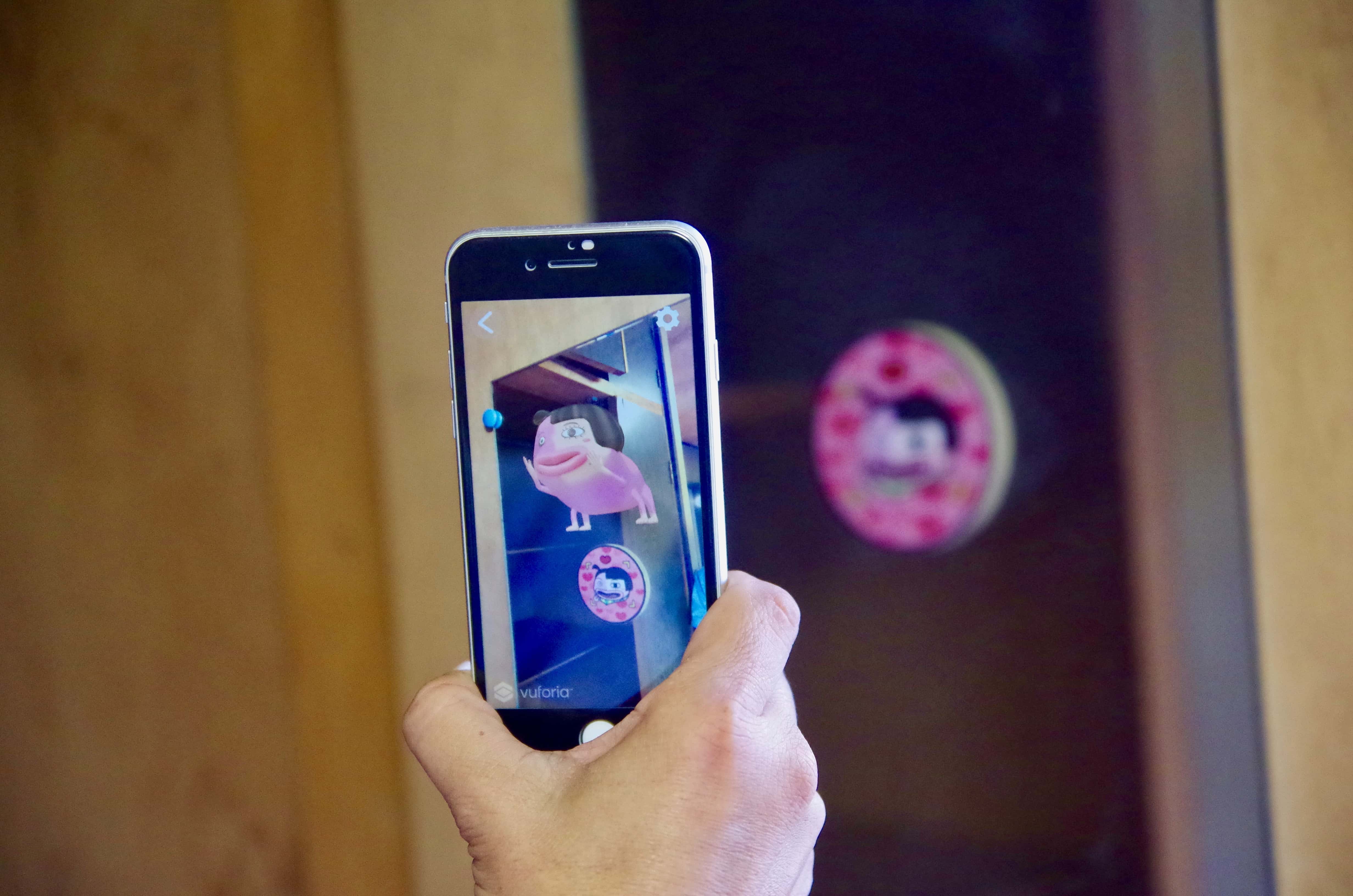 Download the app “Yo-e”(妖e), and scan the round stickers display on the house to reveal on your screen the Yokai that you may not see with your own eyes. They are the things that we left here to remind us things, events, that we should not forget, that we do not want to forget. 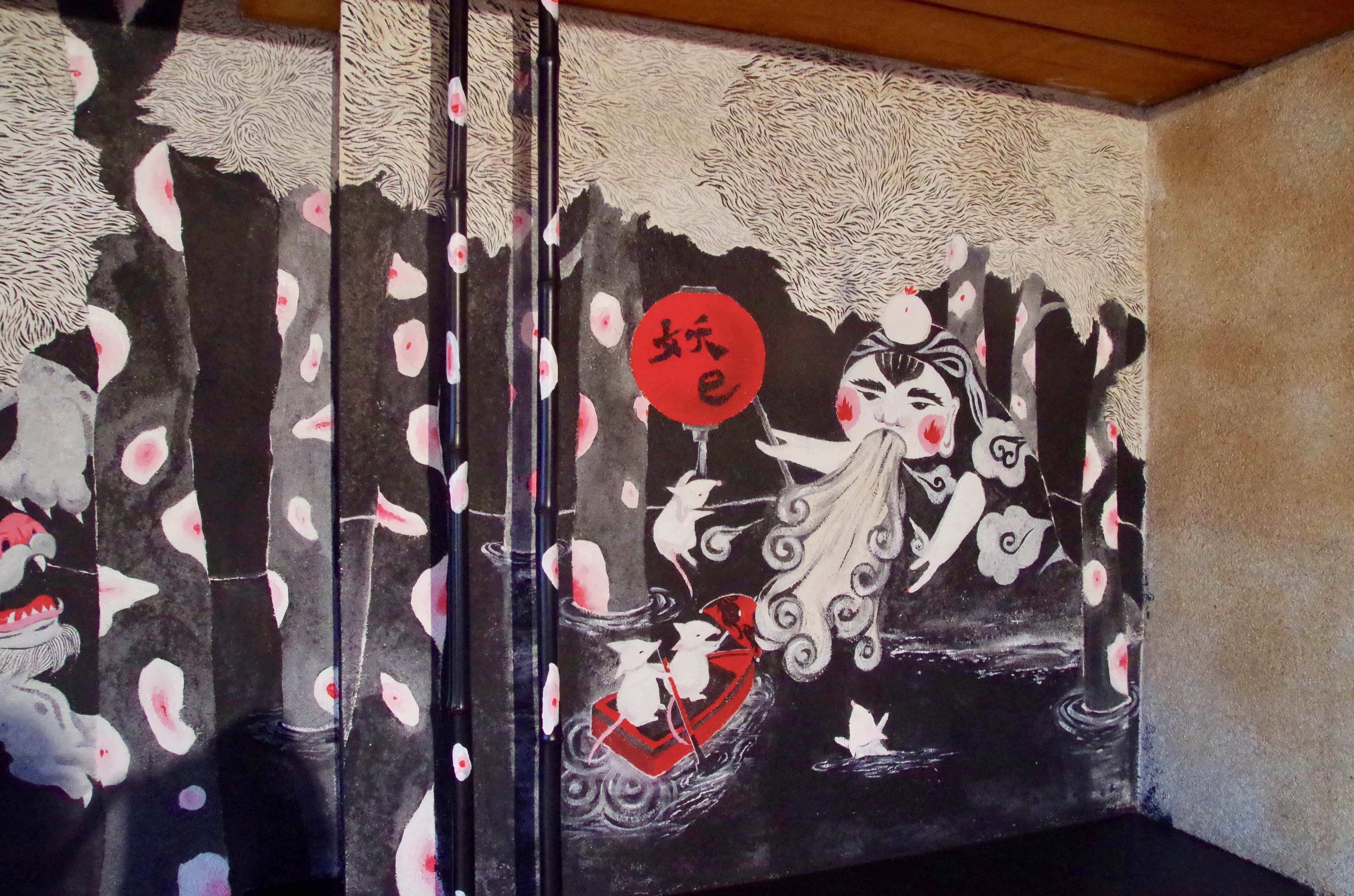 This special exhibition in Room No.5 was created by the students of the National Taiwan University of Arts.

In 2017, the Yokai Sculpture Contest was hold in Japan and Taiwan at the same time. In Taiwan, Yokai also got popular at that time, and many books about mo-shin-a (traditional Yokai in Taiwan) published. Furthermore, Taiwan already had an abundant Yokai culture, so the Yokai Art Museum invited the students of the National Taiwan University of Arts to collaborate and create this special exhibition.

Actually,  the museum director Mr. Yagyu Chubei has previously held exhibitions in Taiwan and gain lots of Yokai lovers during various events. The fortune even brought him to meet a Taiwanese university’s teacher, to who he offered to plan a special exhibition in Taiwan. Mr. Chubei was hoping to attract more Taiwanese travelers to appreciate Yokai art during the Setouchi Triennale period. 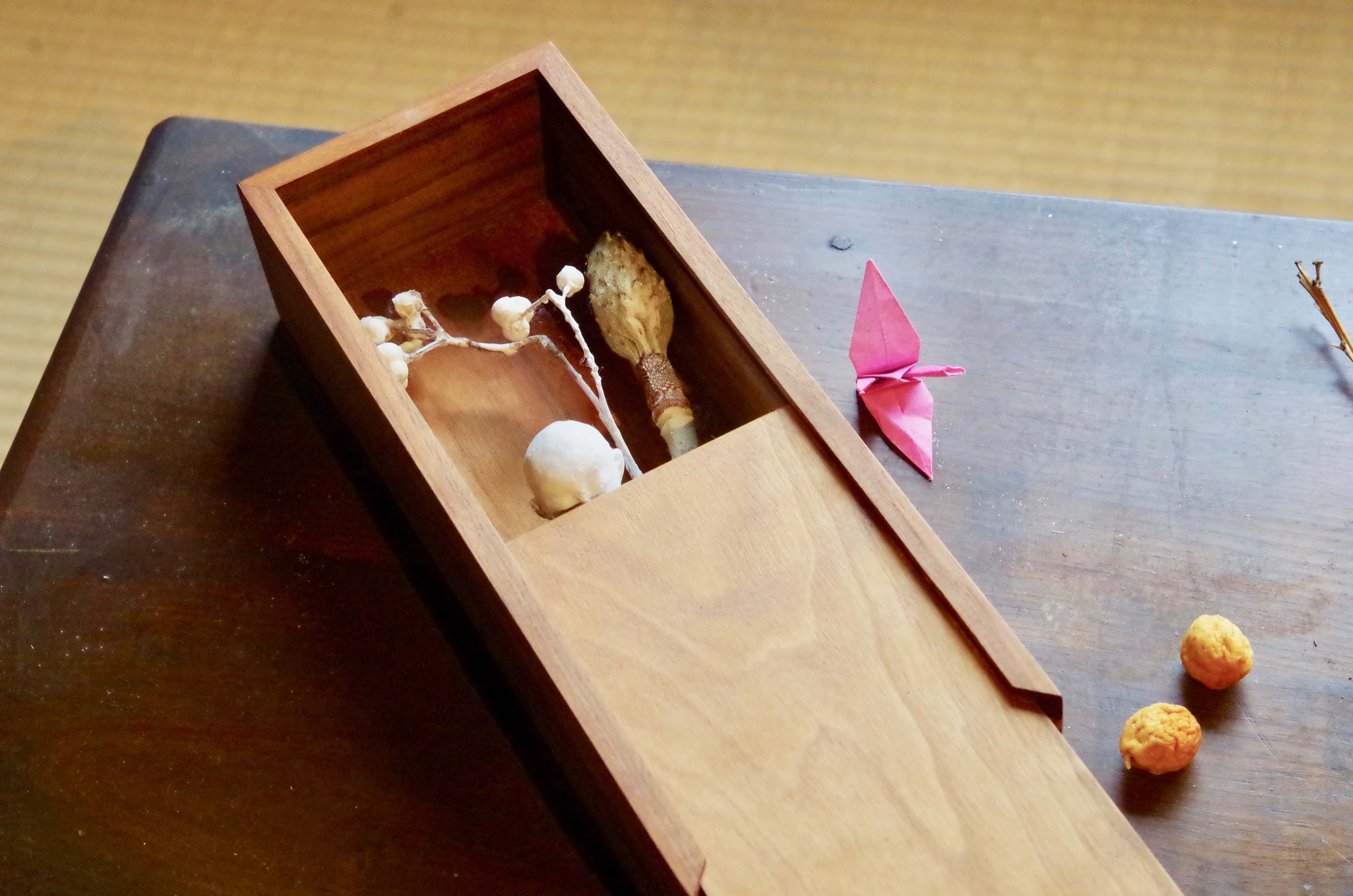 Led by Mr. Li, Zong Ren, the chair of  Department of Painting and Calligraphy Arts, the students came to Shodoshima and worked on this special exhibition. 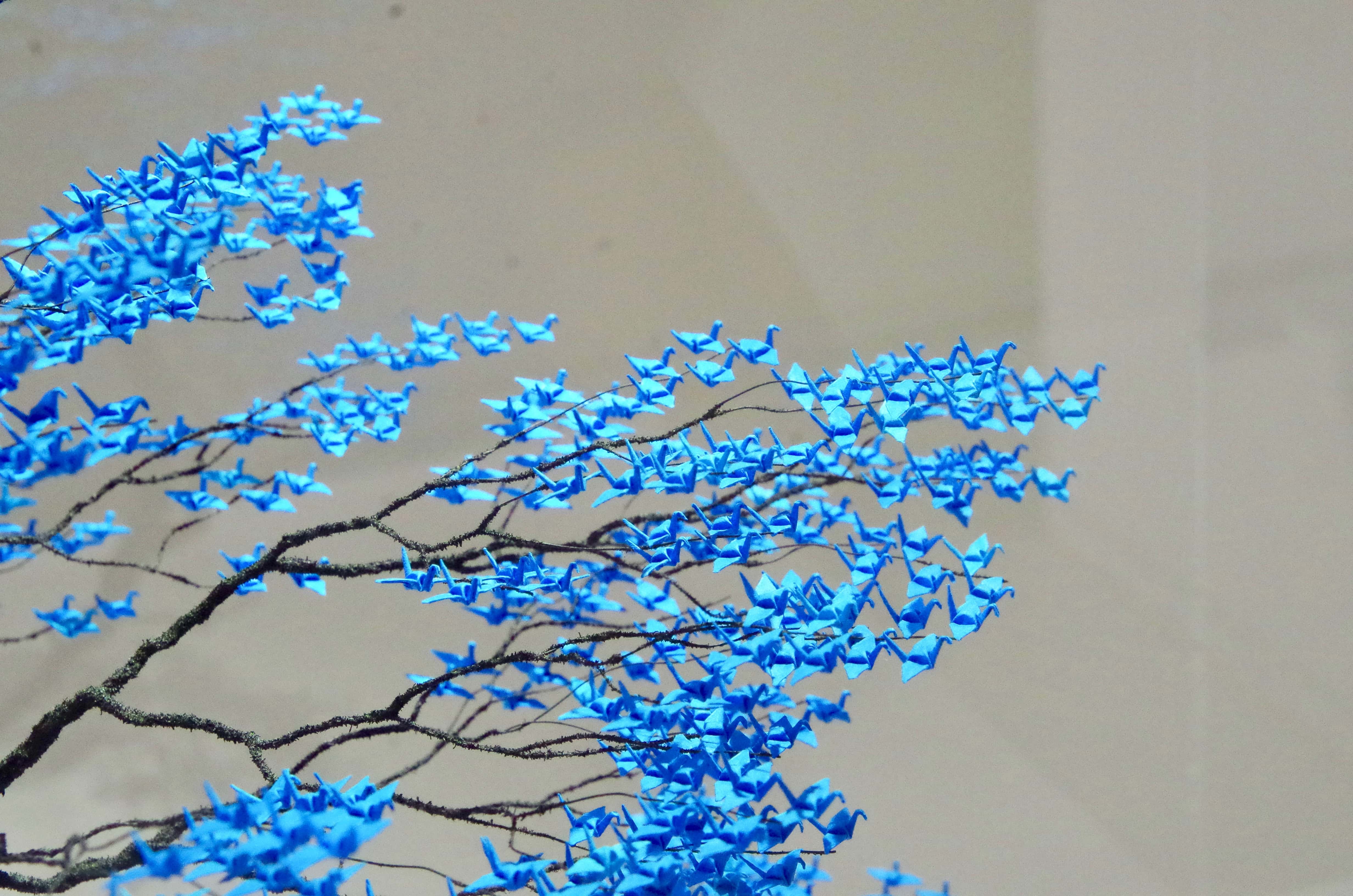 Not far away from the Yokai Art Museum room No.5, there is a museum exhibiting origami crane arts made by Mr. Onogawa Noki. The artist worked using lots of one-centimeter-small paper to folded cranes which he stuck on branches creating an origami cranes tree.

In Japan, origami cranes mean blessing and prayer. During World War II, a girl named Sasaki Sadako living in Hiroshima got leukemia because of the atomic bomb’s radiation, while she fought the disease, she would fold medicine package into paper cranes to pray for recovery. Although her wish did not come true, origami cranes have become the symbol of blessing and prayer in Japan.

The artist Mr. Onogawa hopes that people can feel vitality through his origami cranes works. Without using tools, all the folded paper cranes were made by hands with much sincere blessing. You will be astonished by his amazing folded paper cranes tree.