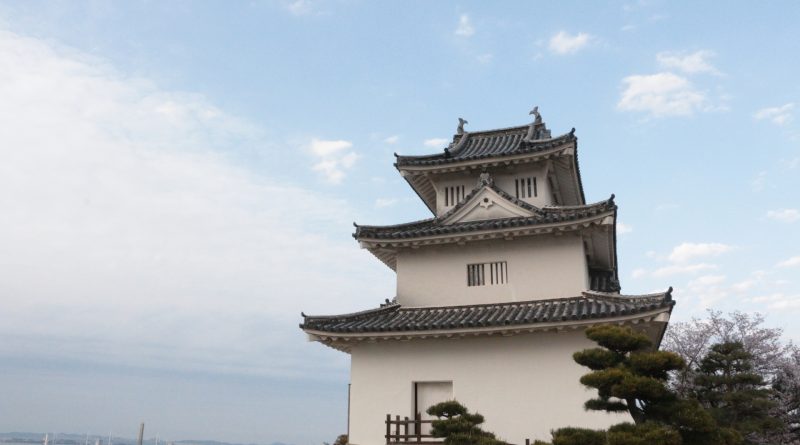 Castles, as an important part of human history, were not only military buildings but also the centers of economy and politics. In Japan, tenshu (天守) is the most important and symbolic architecture of castles. It is the highest place of the castle, so the lord residing could look all around the castle and direct its army. Therefore, tenshu was also a symbol of power in feudalism.

The history of tenshu can be traced to the Sengoku period, when it was called tenshu (天主). The first tenshu, built by Oda Nobunaga in 1576, was Azuchi Castle which was located at Omihachiman city in Shiga prefecture. In that period, tenshu was built on an observation platform named yagura (櫓) using shoin-zukuri (書院造) style, and was surrounded by tall stone walls named ishigaki (石垣). Hereafter, tenshu and ishigaki became the most important features of Japanese castles.

The “Genzai-Tenshu”(the present castle towers) refers to the tenshus built in or before the Edo period and preserved until nowadays. In Japan, there are only 12 existing castle towers preserved, including the four in Shikoku, one of whom is the Marugame Castle located at Marugame city in Kagawa prefecture.

The highest ishigaki in Japan

Marugame Castle was built by the feudal lord of Sanuki Province, Ikoma Chikamasa, in 1597. He spent 5 years to finish the castle on the mont Kameyama, so Marugame Castle is also called Kameyama Castle. The area of the castle includes hills and flatlands, so it belongs to “hira-yama-jiro” (flatland-mountain castle) style classification. Marugame Castle is not only one of the 12 existing wooden castle towers, its entry gates too are listed as Important Culture Property in Japan. 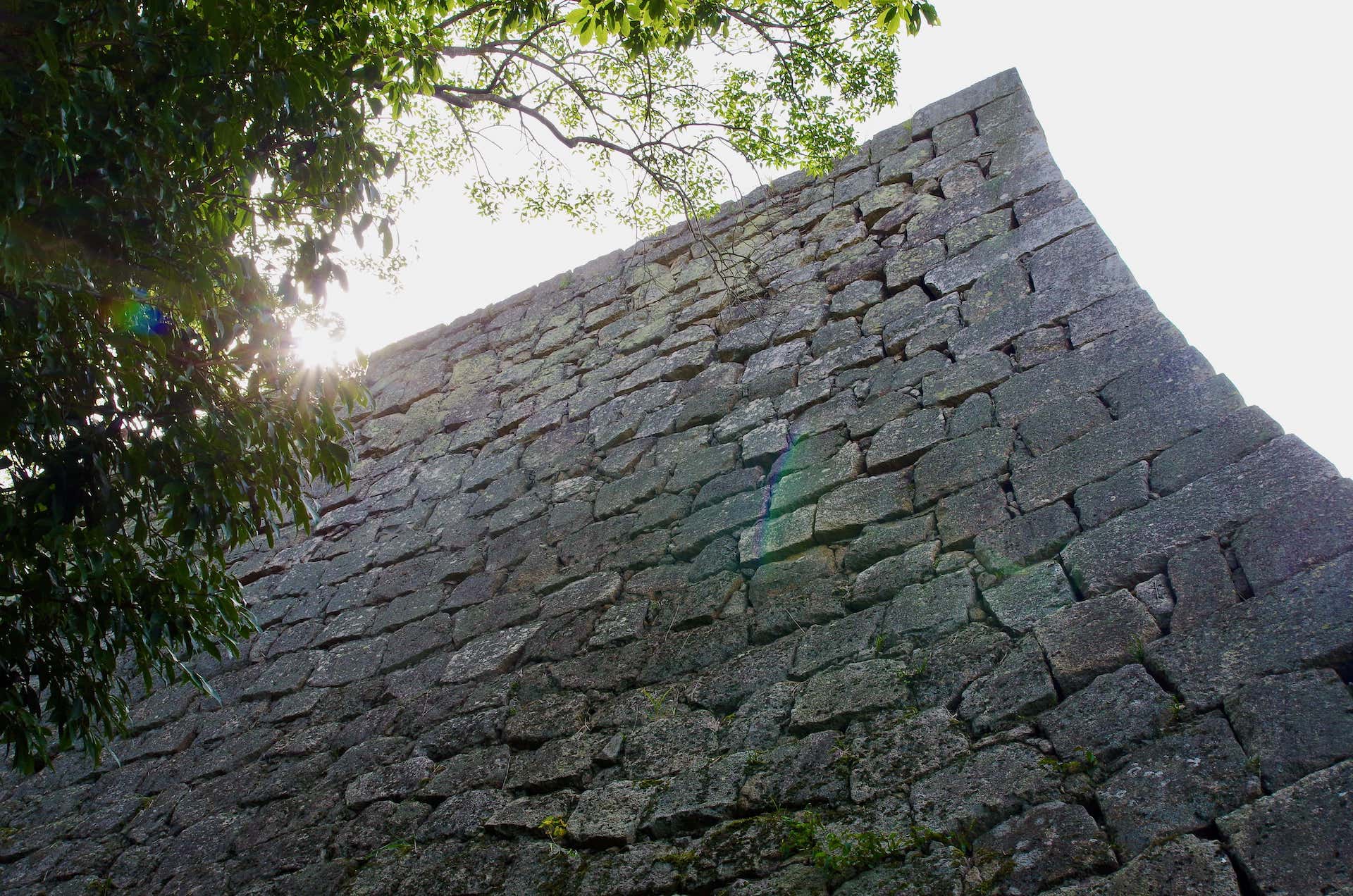 The wooden tenshu of Marugame Castle, finished in 1600, is the smallest one in Japan but the oldest one in Shikoku. There are four layers stone walls from the foot of the hill to the top, with a total height of 60 meters. This ishigaki is the highest in Japan, registering the castle as one of Japan’s Top 100 Castles. 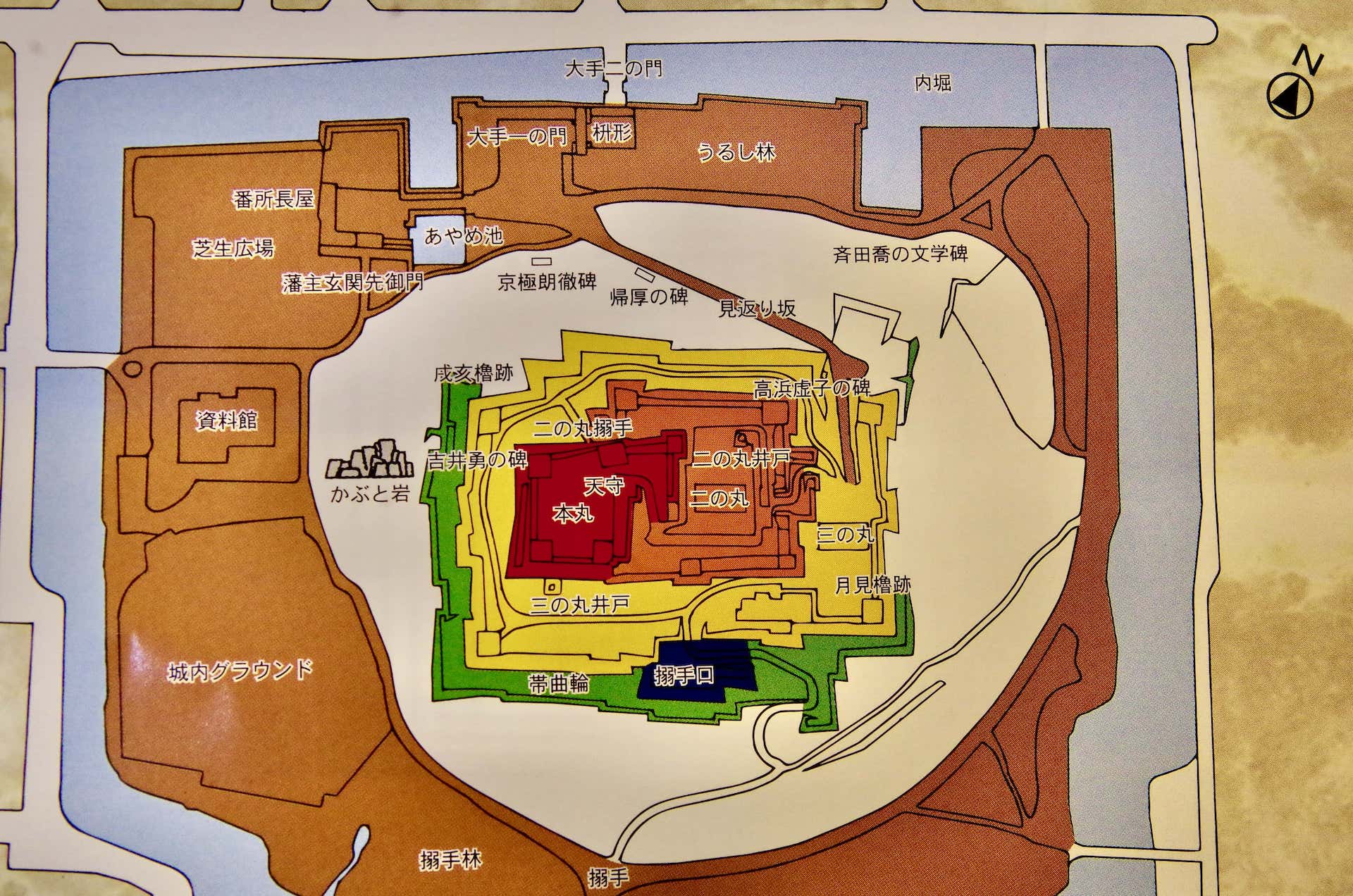 Besides the tenshu, you can easily find honmaru (本丸), ninomaru(二の丸), and sannomaru (三の丸) on the map of Marugame Castle. The main gate outside the castle walls is called ote-mon (大手門). while you pass through it and the ote-ninomon(大手二の門), you will see ote-ichinomon(大手一の門) at the right-hand side. There is the observation platform named yagura (櫓) built on the ote-ichinomon, so this gate is also called yagura gate (櫓門). The area between these two gates is named masu-gata (枡形) which is an important place for defense. 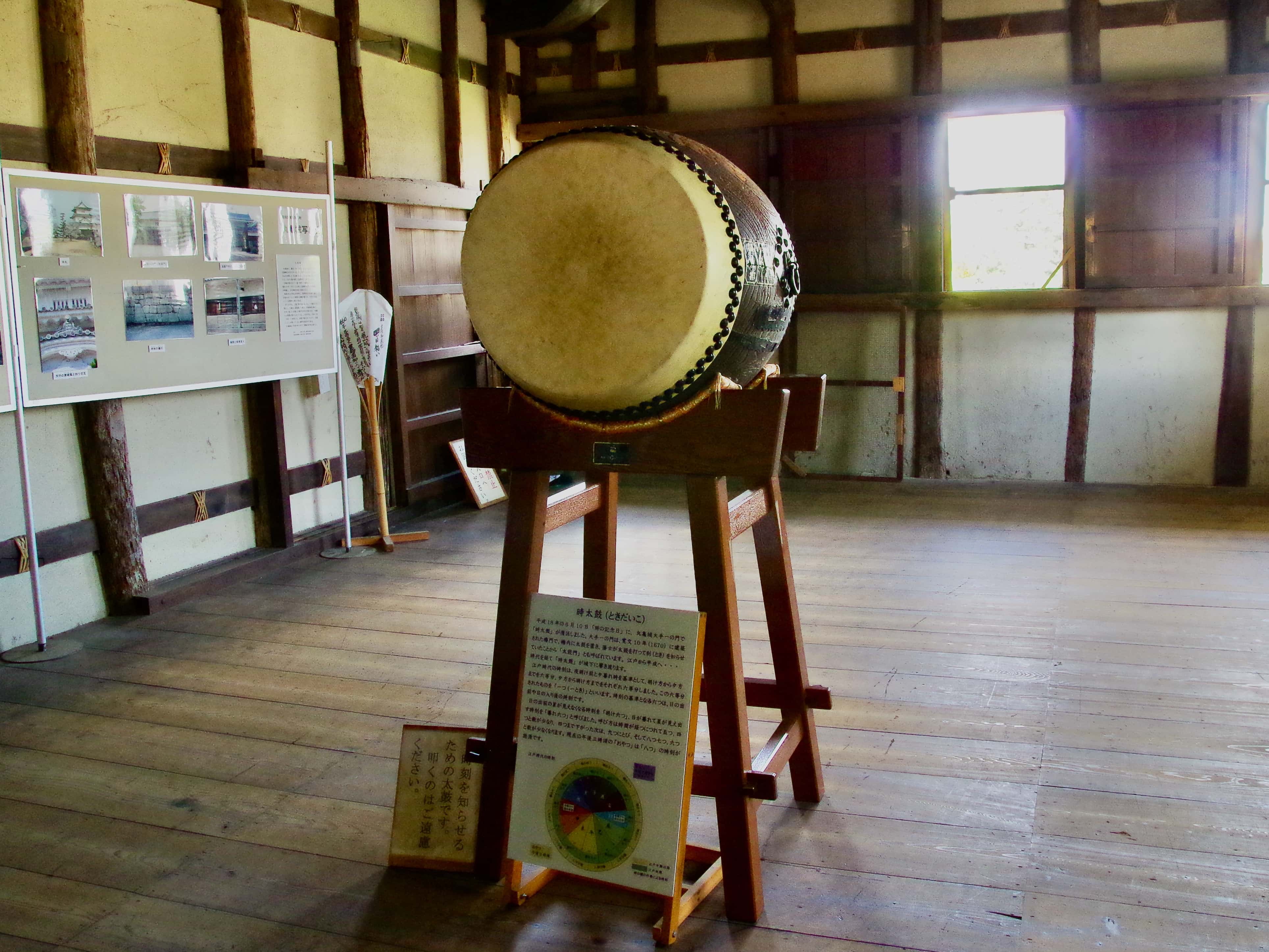 Yagura gate is not only an observation deck but also a place where the taiko (Japanese drum) is used to announce the hour. Nowadays, you still can hear the drumbeat at noon. 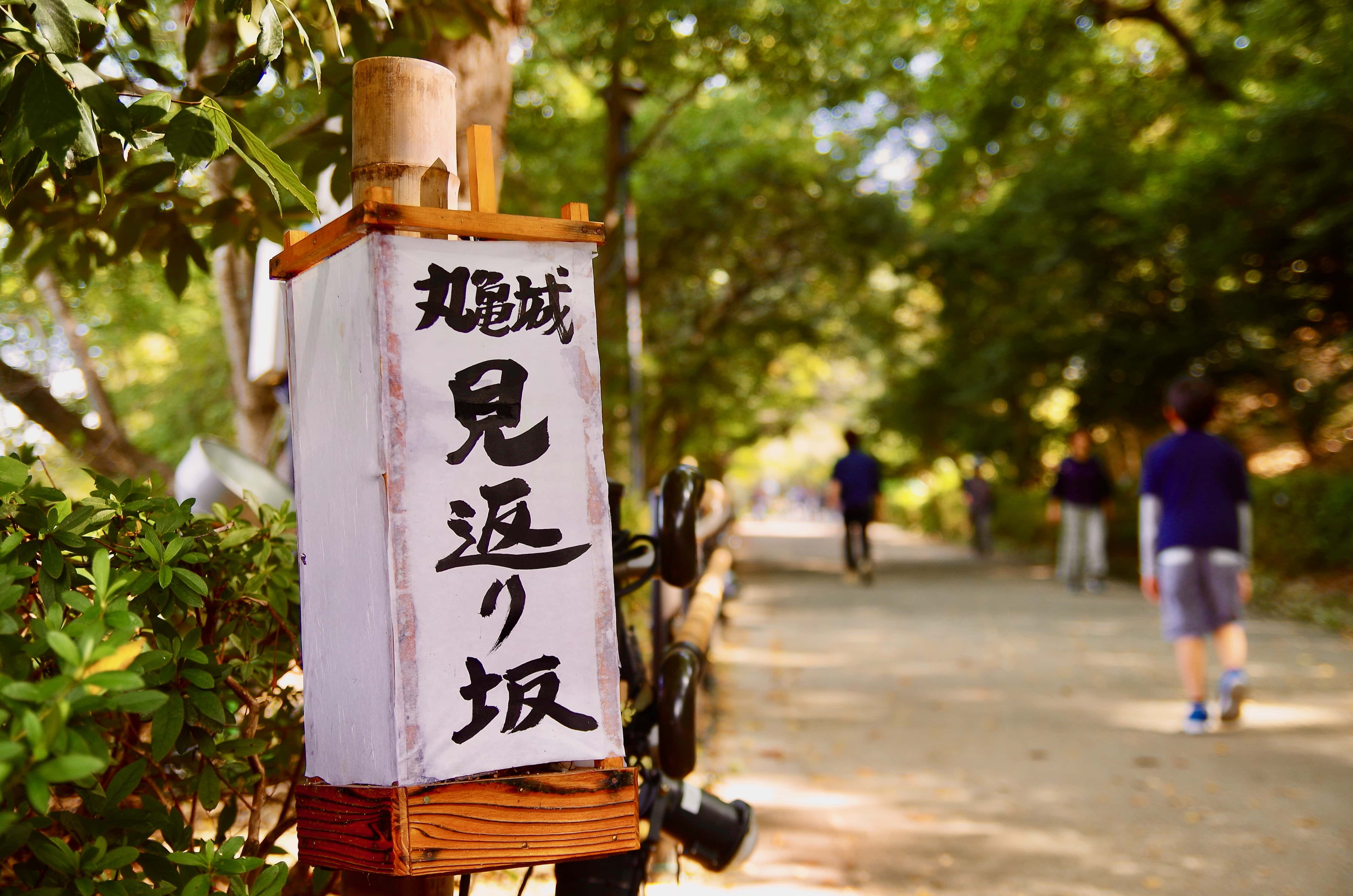 Crossing the ote-mon gate, you will arrive mikaerizaka (見返り坂) which was named because of the slope so steep that it makes people wanting to look back. 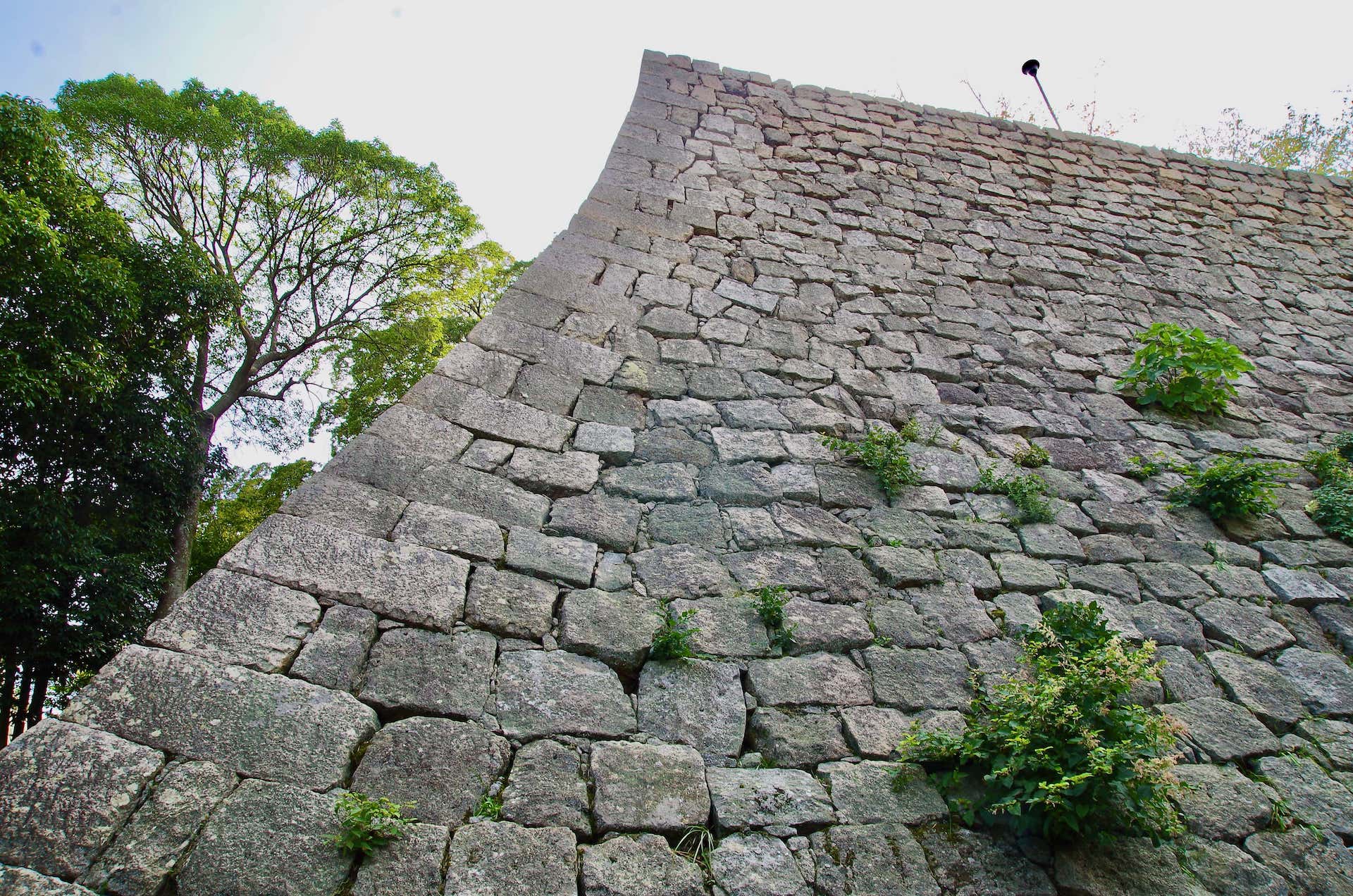 The beauty of the ishigaki

The most beautiful attribute of Marugame Castle is its stone walls, ishigaki. The walls of sannomaru use the architecture skill named kirikomihagi (切り込みハギ) where each stone is carefully chiseled to perfectly fit with all the other stones.  Comparing to the straight walls of China, Japanese walls usually build with slope and curve which can avoid the walls collapsing in earthquake. You can see the beautiful curve on the upper half of the walls, and the slope gets steep until 90 degrees at the top. This design is called ougi-no-kobai (扇の勾配) which also prevents enemies and ninjas to climb up the walls. 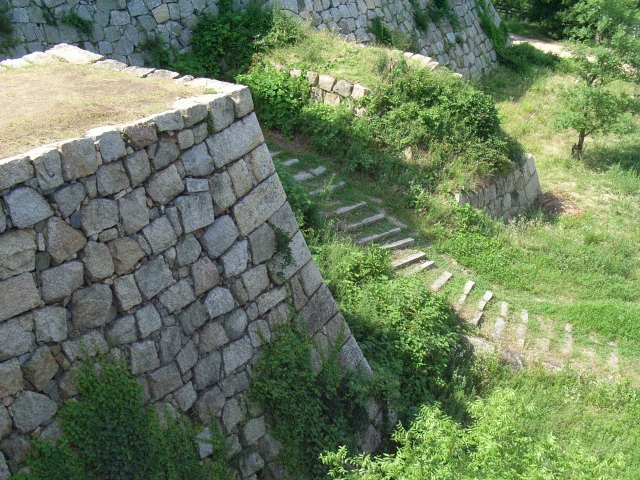 Usually, a castle has two gates, one is ote-mon, and the other is the back gate named karamete (搦手). Besides a karamete gate at the other side of ote-ninomon, there is a secret karamete hidden in ninomaru where the defense soldiers can ambush enemies. 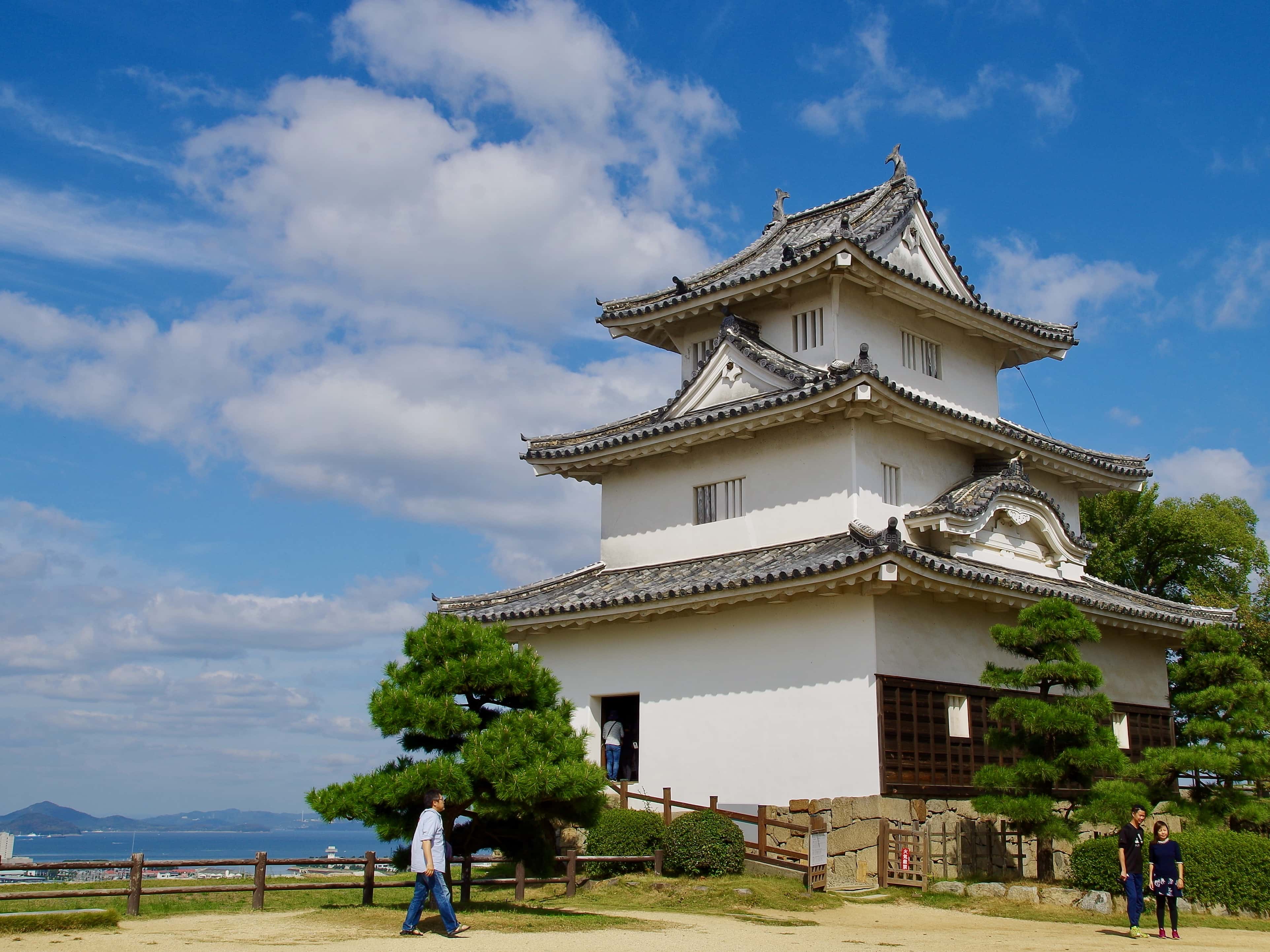 Passing through the honmaru, you will arrive to the tenshu. The tenshu of Marugame Castle is built in 3-tiered, 2-story, tower-type architecture design which means you can see 3 roofs outside and 3 floors inside the tenshu. At first, tenshu was the residence of the lord, so it had tatami inside; however, while the tenshu became the observation platform like yagura, the tatamis were removed. 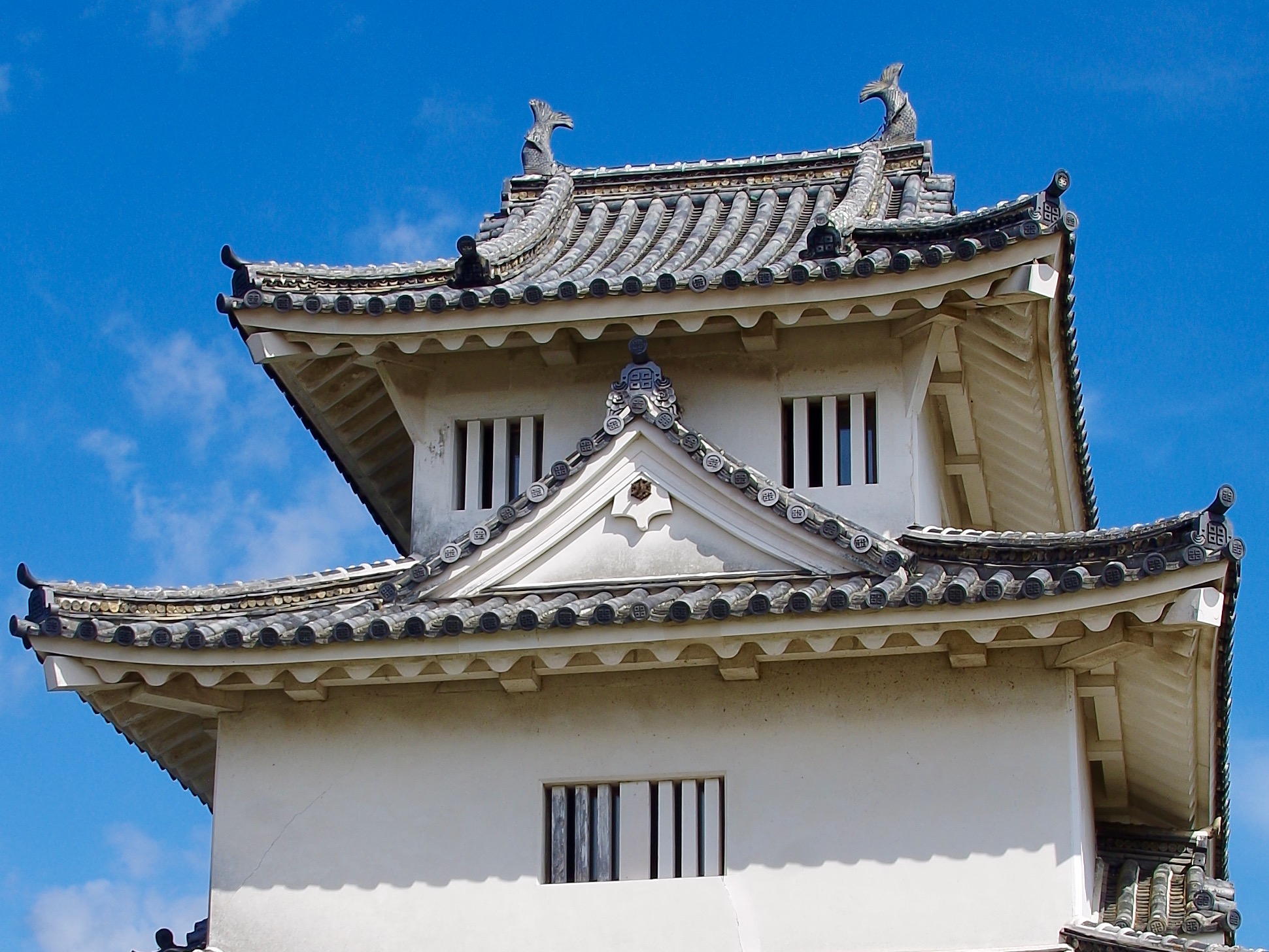 The height of Marugame Castle tenshu is only 15 meters, and the plaster walls give a pure white and elegant appearance.

The crossing place of the roof by the hafuita (破風板, gable board) is called hafu (破風). The highest roof of Marugame Castle’s tenshu is the hip-and-gable roof style called irimoya-hafu (入母屋破風) which is similar to Chinese architecture named Xieshanding (歇山頂). The triangle bay window at the second roof is called chidori-hafu (千鳥破風 ) which is for the decoration and lighting. These two hafu designs look similar but have some differences. In irimoya-hafu, the bottom of the gable boards is connecting with the ridge of the roof; however, chidori-hafu is not connected with the ridge but directly to the roof. 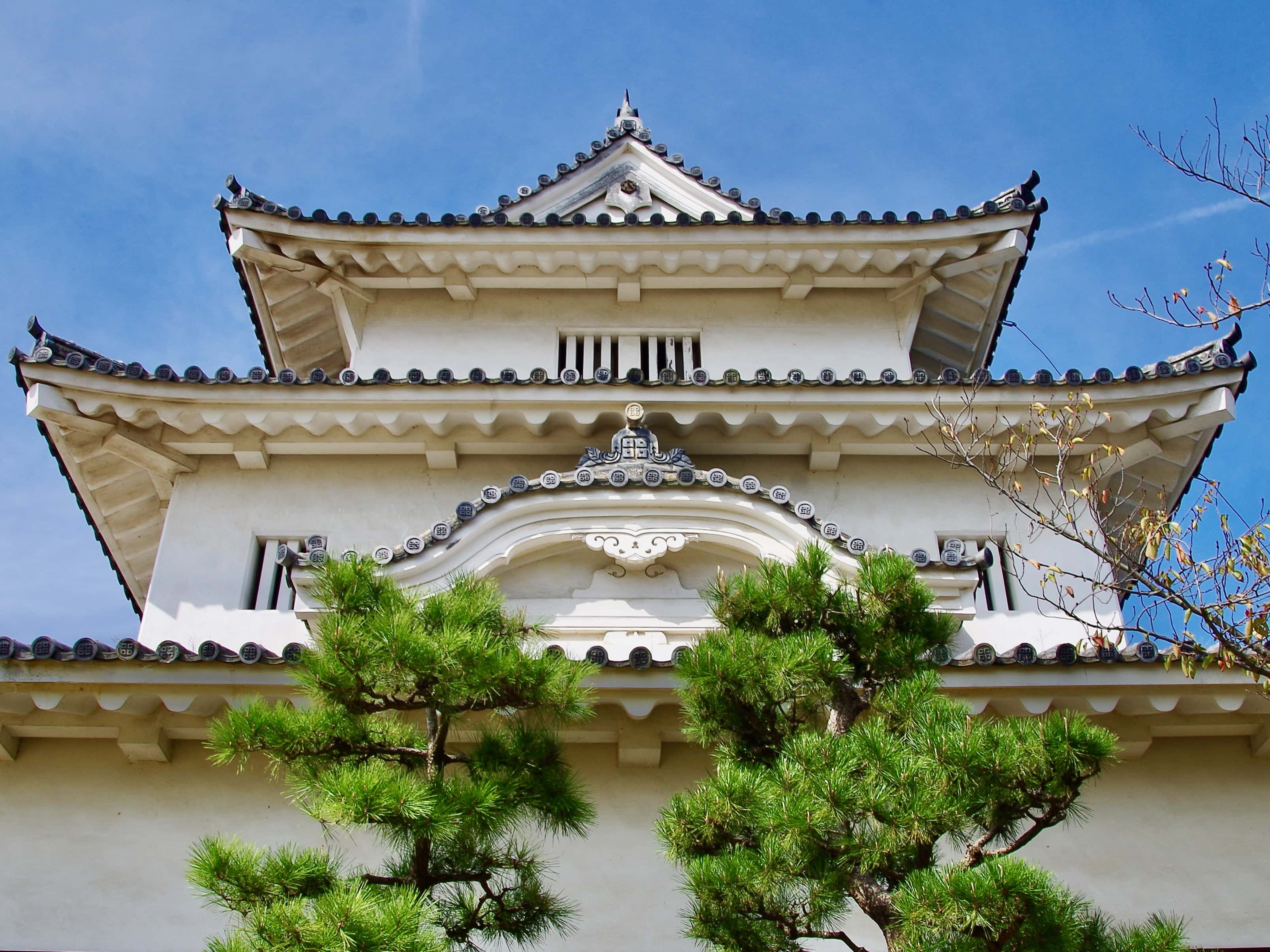 The third layer roof style is called mukokara-hafu (向唐破風) which is the arch shape and usually used in shrine and temple architectures. You can find the decorations called gegyo (懸魚) just at the crossing place of the gable boards. In ancient times, houses usually built by wood so people would make some mascots that live in the water to prevent the fire. Gegyo is the best example of the mascot.

Japanese traditional architecture may not be as splendid as the Chinese one, but you can find lots of smart ideas on every corner. Marugame Castle may not be as magnificent as other Japanese castles, but it is worth to explore slowly, discovering its special materials and unique architecture styles. 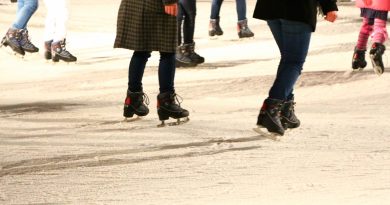 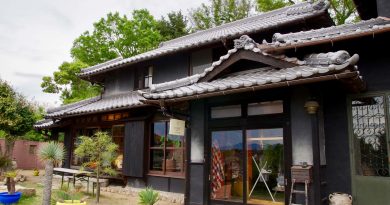 The pension Muresuzume in Mure, the harmony with Nature 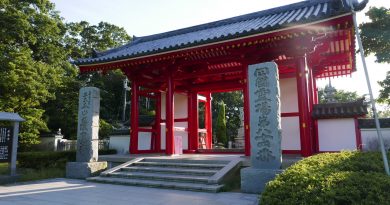 The tanukis’ legends of Yashima temple and Kukai