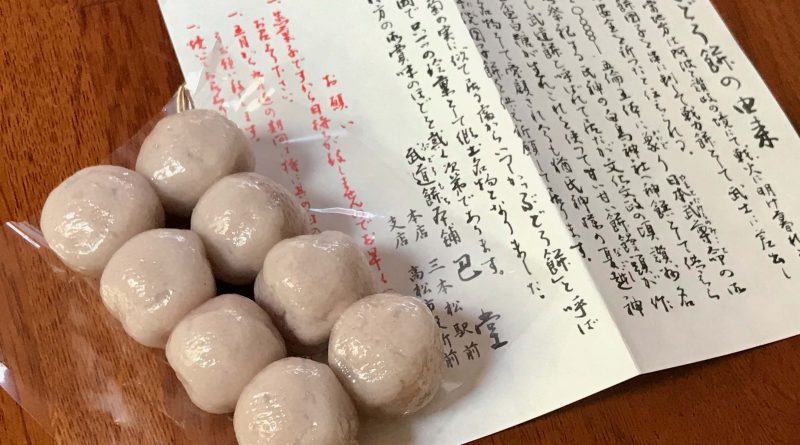 The birthplace of Sanuki Wasanbon, the east Sanuki area is located at the east Kagawa prefecture and close to the Tokushima prefecture. If you are looking for the traditional dessert of this area, the Budou-Mochi made in the Shirotori-cho is the most famous one.

The origin of Budou-Mochi, two versions.

During the Heian period (794-1192) Minamoto-no-Yoshitsune went to Yashima in Kagawa leaving Kyoto to suppress the Taira clan’s army. On his way, he visited the Shirotori shrine (at the Higashikagawa city) which worshiped Yamato Takeru, a legendary Japanese Prince, and is as famous as Konpira Shrine in the west Sanuki, where he enjoyed the local dango at the nearby tea house. Since then locals have called the dango as Budou-Mochi (武道餅).

The other story said that during the Sengoku Period (1467-1615) lots of wars happened between the Sanuki province (Kagawa prefecture) and Awa province (Tokushima prefecture). To pray for the good fortunes during the wars and for safety, the locals made dango named Senryoku Mochi (戰力餅), mochi of war power, that they gave to their warriors. Later, that dango were worshiped for Yamato Takeru at the Shirotori shrine, and the name changed to Budou-Mochi (武道餅).

There were two stories whether the one is true, both present original motivation closely related to Yamato Takeru and the martial era of Japan. 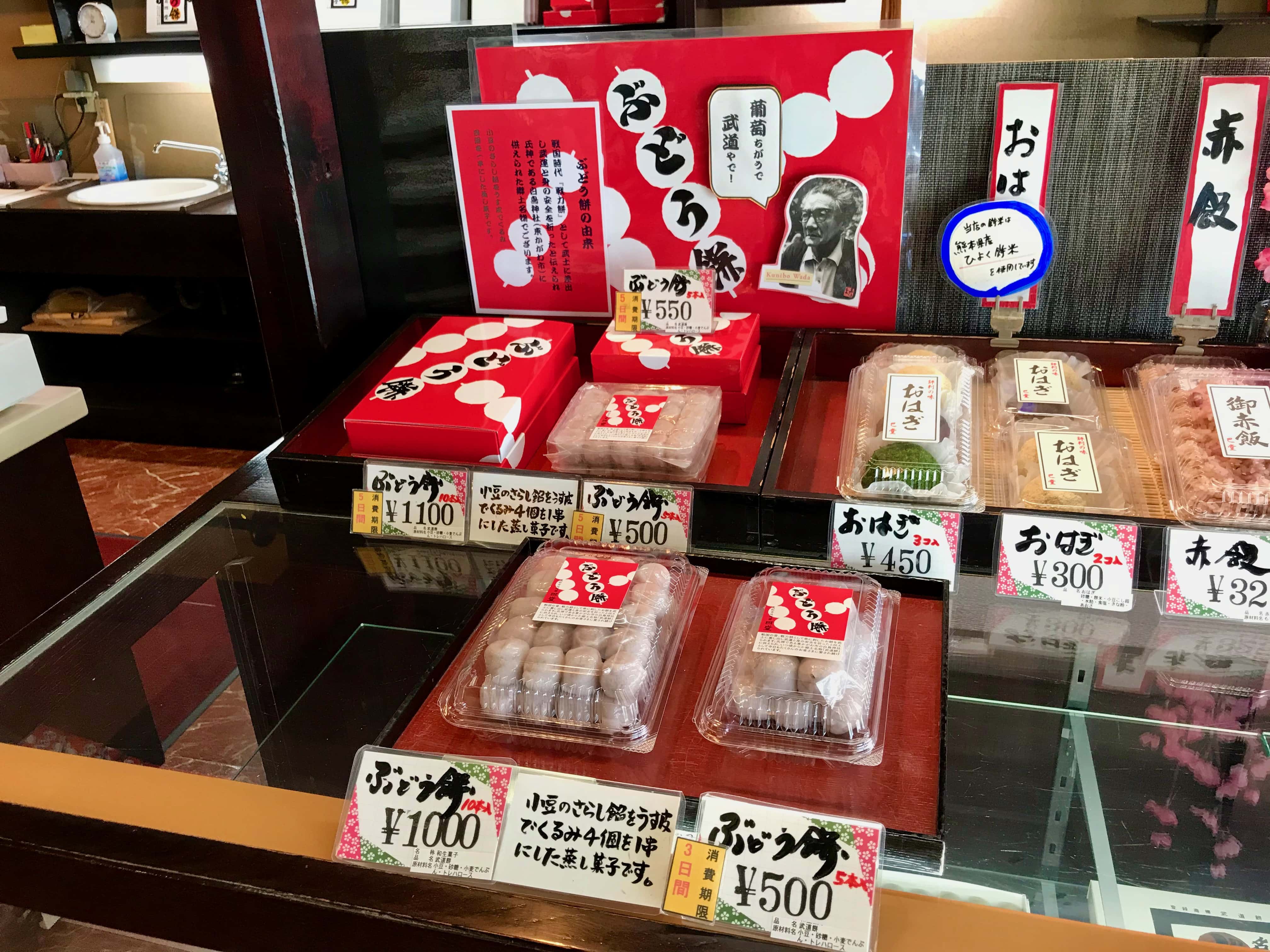 During the Bunka-Bunsei period (1803-1830), just after the Wasanbon was finally popularized, locals started to add some of the new refined sugar and red bean paste into the Budou-Mochi. Because of its new color and its shape the dessert was looking-like grape (葡萄, which sounds like 武道餅), and people twisted its name to the hiragana version (ぶどう) emphasizing the double meaning. However nowadays tourists only see the grapes meaning and often forget the way of samurai.

A Budou-Mochi is a one-bite-sized soft ball filled with red bean paste. However, the taste is not as sweet as you can expect from a wagashi. Budou-Mochi is a preservative-free sweet freshly made every day and without vacuum packaging,  the dango should be eaten within two or three days making it difficult to share with friends as a souvenir. 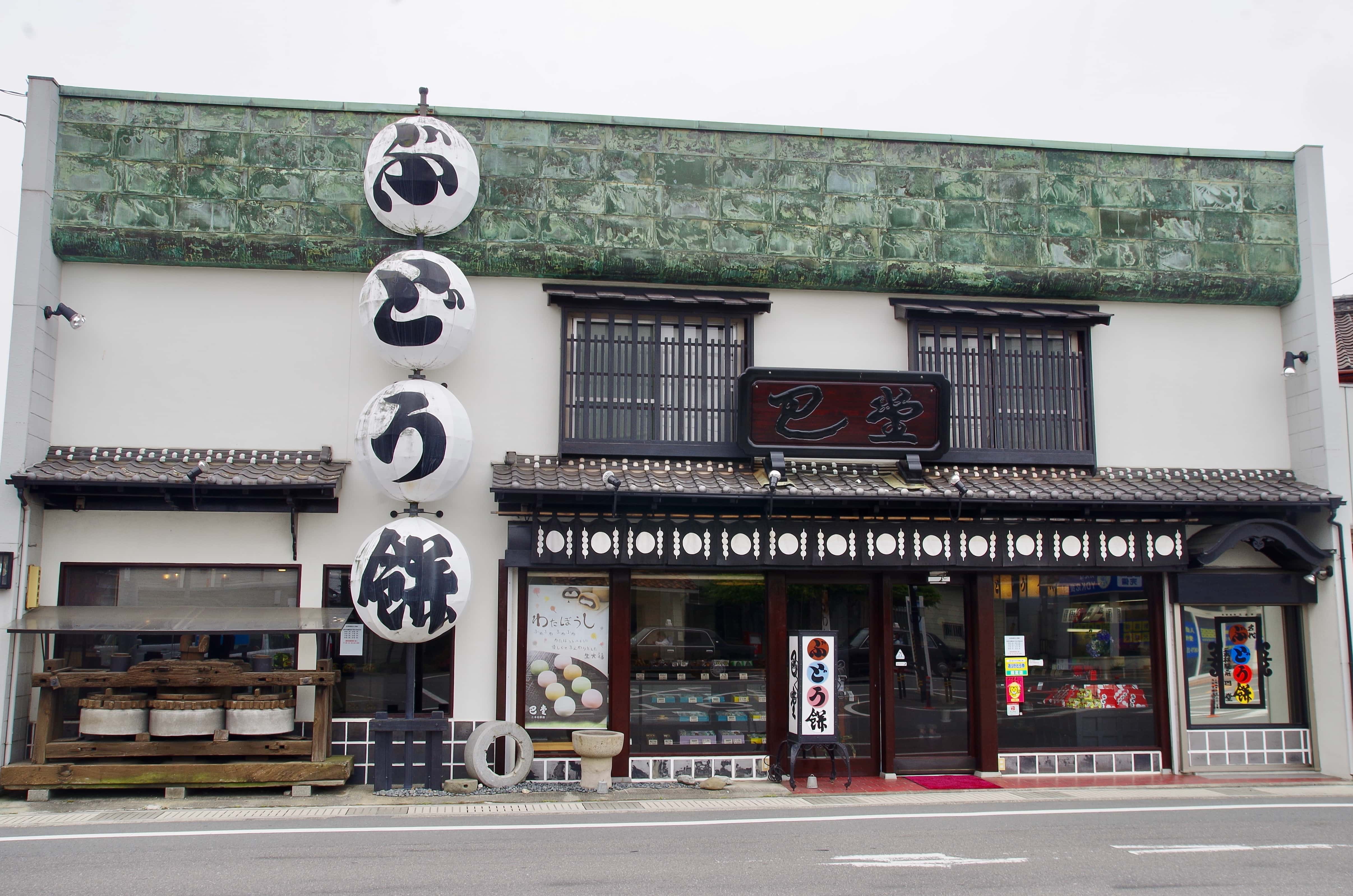 The stores making Budou-Mochi like the shop Seikadou (正華堂) are gathered nearby the Shirotori shrine. The shop Tomoedo (巴堂), also really famous, that started its business in 1928 when the JR station Sanbonmatsu opened. The simple storefront and the milling sugarcane traditional equipment next to the door are proof of the long history of the store. 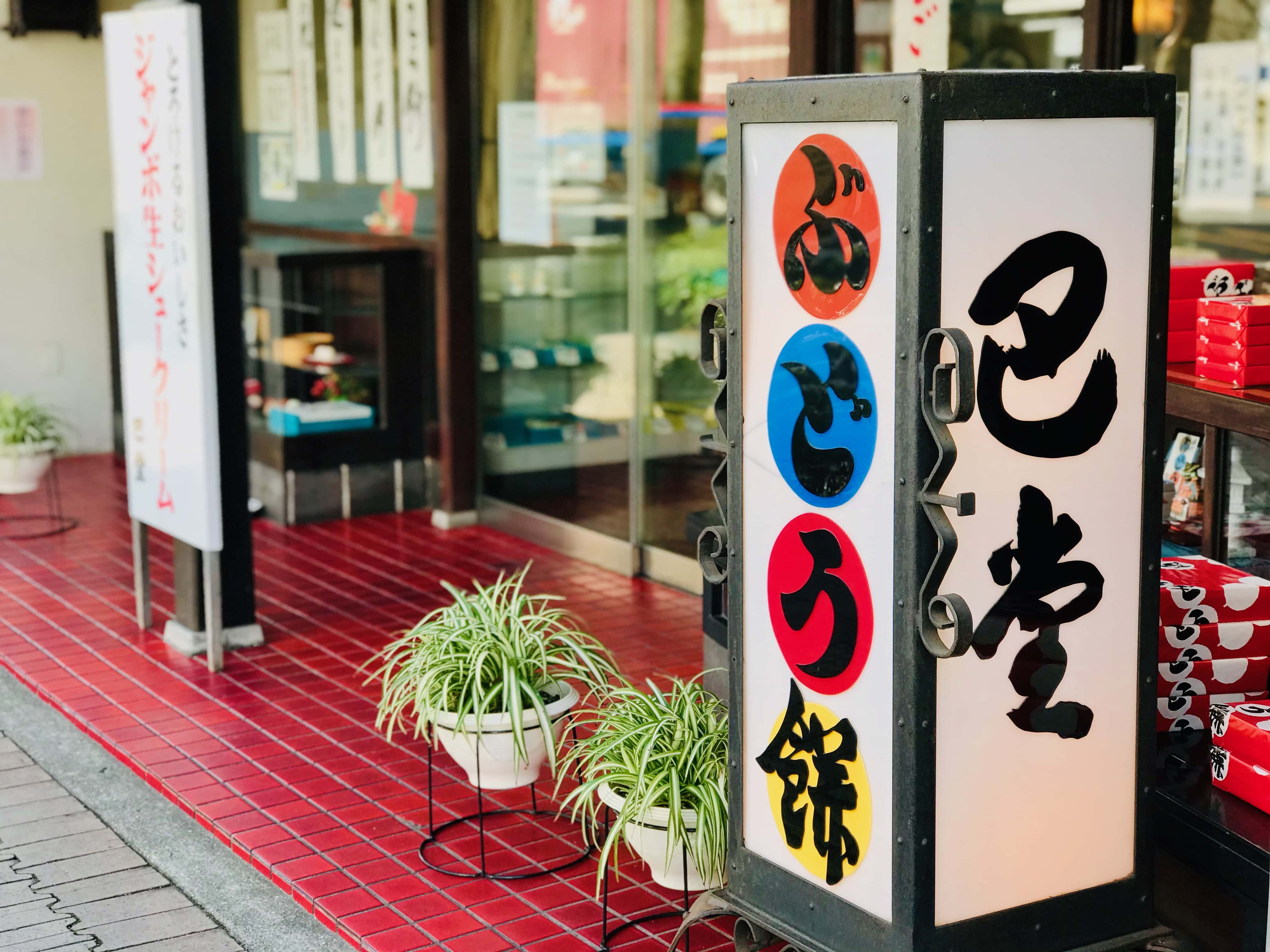 Tomoedo also has a branch store opposite to the Takamatsu city hall.  Opening this store shortens the distance between Budou-Mochi and tourists as they do not need anymore to run to Sanbonmatsu or Shirotori when they want to taste the famous east Sanuki sweet.

Even though Budou-Mochi should be eaten in short time, it is possible to warp and freeze the sweet to extend its preservation date. Microwave or steam the sweet balls to enjoy the delicious Budou-Mochi at home. Accompanied with a cup of Takase tea, it is all the delicious flavor of Kagawa that will be gathered for your tea break. 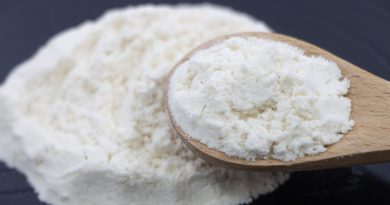 The tradition and pride of Kagawa – the Shiroshitato and Wasanbon 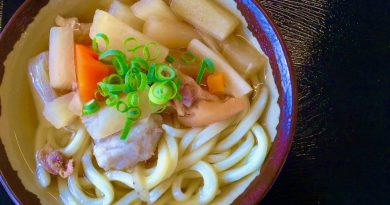 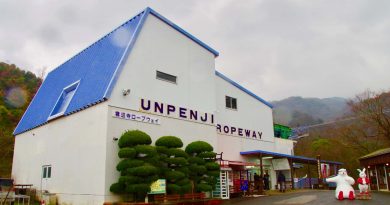