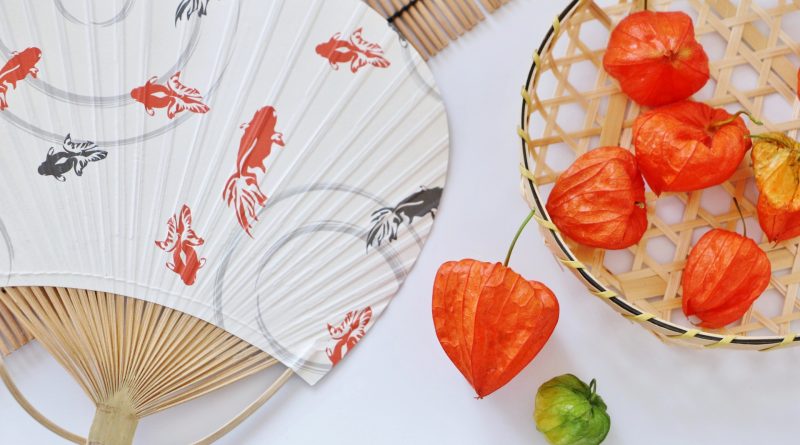 In 1952, Mister YANAGI Soetsu (also called YANAGI Muneyoshi) the father of the Mingei movement, established the concept of folkcraft which means the hand-crafted art of ordinary people, and also the beauty of the traditional objects in the daily life. He wrote down the criterion in the “The Way of Art”, “Everyday life requests a plainness style. If a great utensil looks too gorgeous, it will become common. Strong quality, definite shape, and delicate coloring, are the guarantee of beauty. When a utensil loses its function, it loses its beauty at the same time.” There is no better way to describe the Uchiwa made in the Marugame city of Kagawa Prefecture, as there are great plainness folkcraft goods with strong quality and traditional refined color.

A souvenir from your visit to the Konpira Kotohira shrine

It is said that the Uchiwa, a traditional fan, was around the 7th century imported from China to Japan. At that time, silk, plant fiber like musa basjoo (Japanese fiber banana), or feather were used to made Uchiwas, and it was for the member of the Imperial court and priests a symbol of power. However, the model of Uchiwa made by bamboo and washi (Japanese traditional paper) was completed in the Muromachi period.

During the beginning of the Edo period, the chief priest of Konkou-in named Yuugen drew the Konpira Kotohira shrine crest “金 (gold)” as a motif on an uchiwa, hoping that pilgrims of the shrine would buy it as a souvenir to bring home, and help to spread the Uchiwa of Marugame. In 1780, the Lord Kyougoku in charge of the feodal domain of Marugame under the constraint of a financial crisis encouraged the soldiers to sell the Uchiwa as a local specialty of Marugame. Finally, in the Meiji period, Uchiwa was the main local industry of Marugame.

The reason why the industry of Uchiwa got so well in Marugame was not only due to the encouragement of the local administration, but mainly because of the materials for the production that was easy to gather. To craft Uchiwa bamboo from Ehime, washi from Kochi and glue from Tokushima are used, being close to production area was an advantage to Marugame during the Edo period transportation was still an issue. The production of Uchiwa started in Marugame, then developed until nowadays.

The specificity of Marugame uchiwa is that the frame and grip of the uchiwa are made of the same single bamboo. There are two types of bamboo used for the grip. The first one referred as the “man-bamboo”, thick, hard, and glossy, is called “madake” ( Japanese timber bamboo). The second one referred as the “woman-bamboo”, thin, soft, and matte, is called “sasa” (broad-leaf bamboo). The former is from the Kanto region, the later from Kyushu and Shikoku. Besides, there are also two types of grip, a round and a flat one. 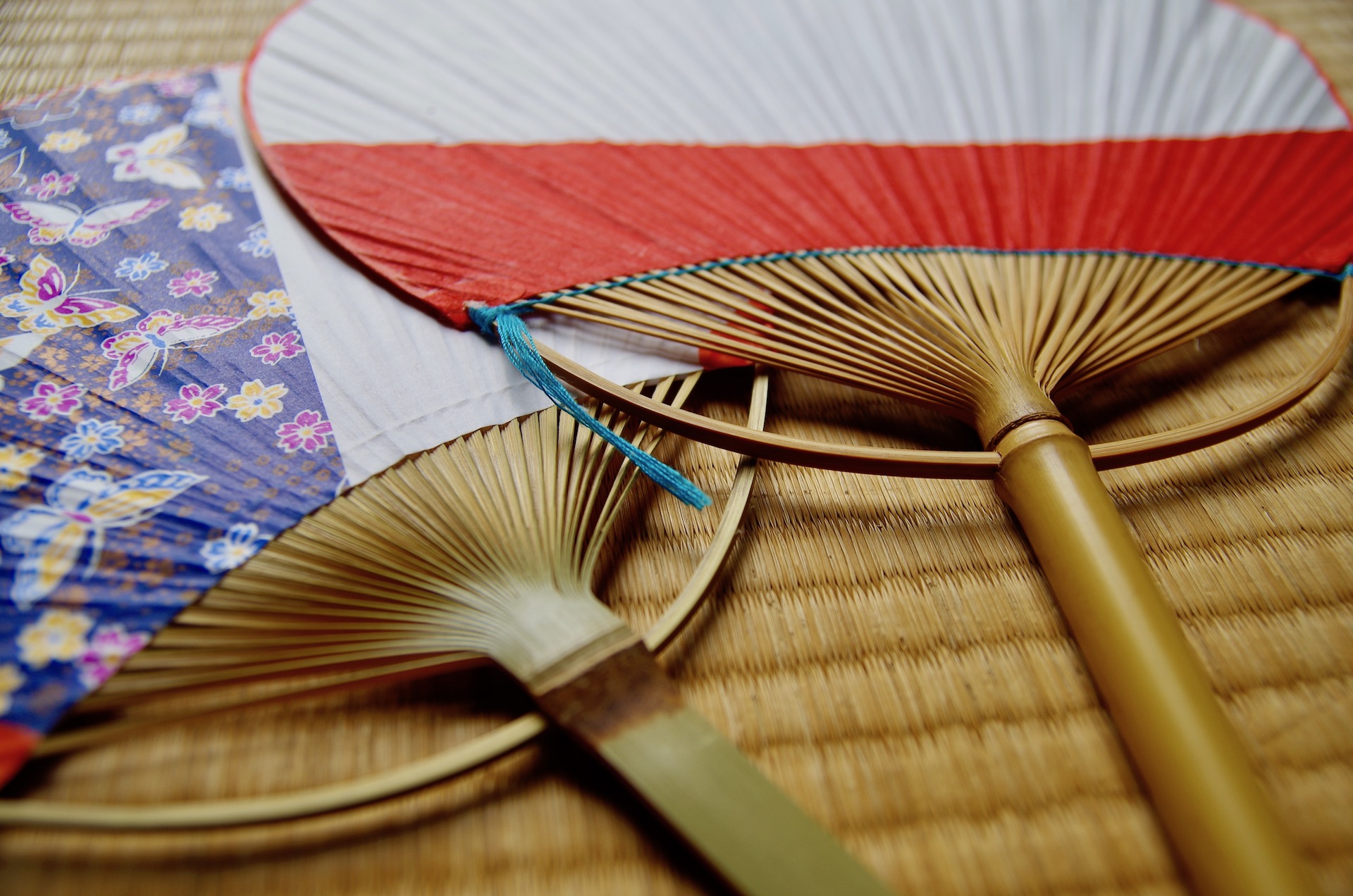 The first uchiwa designed by Yuugen, the chief priest of Konkou-in, was a “man-bamboo” with round grip. To strengthen the fan the priest applied a kakishibu (persimmon tannin) layer on the upper part, the first “Shibu-uchiwa”. In 1780, the house-setting of the feudal retainer of Marugame Domain learned from an infantryman of the feudal retainer of Nakatsu Domain in Kyushu how to easily craft the “woman-bamboo with round grip”. At that time, Marugame Domain encouraged people to learn how to make uchiwa, therefore the fan quickly spread into the lower soldier and the civil society.

In 1880, the uchiwa wholesale store at Tomiyamachi, located in Marugame city, referred the manufacturing process of Nara uchiwa, then changed Marugame uchiwa’s round grip into the flat grip, and founded a factory at Higashishioya (Shioya nowadays). Because of its easy process and mass production, the trend of uchiwa changed from the woman-bamboo with round grip to the man-bamboo with flat grip, to become the basic pattern of Marugame uchiwa nowadays.

As a traditional handcraft of the nation, the production quantity of Marugame uchiwa is the top of Japan. However, it is also facing the problem of insufficient successors because of the aging society.

For succeeding the 370-year-old traditional industry, the elementary schools in Marugame arrange classes “how to make uchiwa” for students. Additionally, the government also held the courses “The manufacturing method and skill of Marugame uchiwa”, events where the artisan make and sell, and where workshops invite people to experience the crafting process together.

The uchiwa stars from the two easy steps, gluing and pasting washi. Each fan ribs should be glued properly, and paste the washi carefully to not tear the paper or crack it.

Then you should use the skill called tataki (means knock) to cut down the fan ribs, and the fan’s shape will appear. At the last, you paste the paper around the girth of the fan, the uchiwa is finished.

After these easy steps, it is time to learn some more difficult processes including cutting and binding. During the experience course, the instructor teaches us lots of knowledge and make everyone realizing that a simple uchiwa is not as simple as it looks.

Mr. Yanagi Soetsu said, the beauty resides in the use; a utensil will appear in its beauty, vitality, and warmth only when it is used. While I watch at the traditional uchiwa that I just finished, suddenly, I could understand the simple and vital beauty of the handcraft that Mr. Yanagi Soetsu was speaking about. It seems that the experience course also increases our sense of beauty unconsciously.

The experience class of Marugame uchiwa 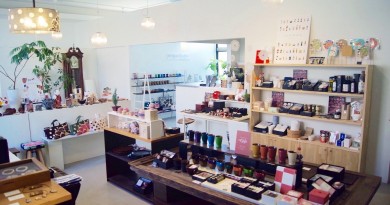 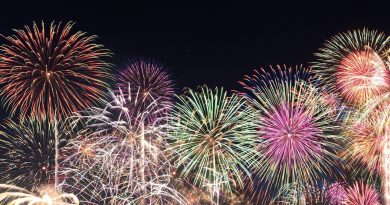 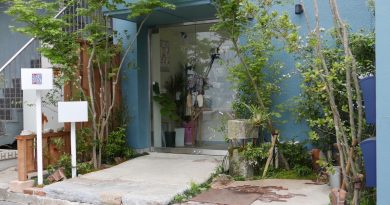