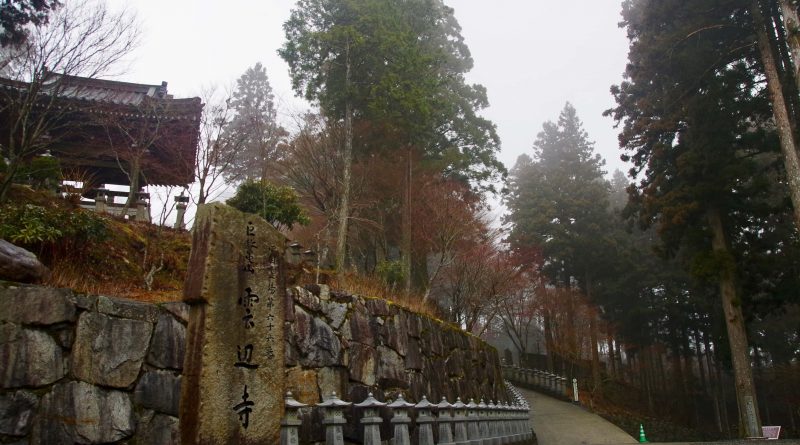 Walking the Shikoku Pilgrimage, you will encounter Sekisho temples (checkpoint temple) in each prefecture of Tokushima, Kochi, Ehime, and Kagawa. Sekisho temples are places where Kobo Daishi makes a judgment on people. If you are judged as a wrongdoer, you are not allowed to pass through the checkpoint to the next temple. Unpenji temple is the first Sekisho temple in Sanuki (old name of Kagawa) and also the most difficult one.

“Judgment” sounds really scary to people. However, think it in a different way, if you pass the Unpenji temple that means your journey in Sanuki will get smooth sailing. 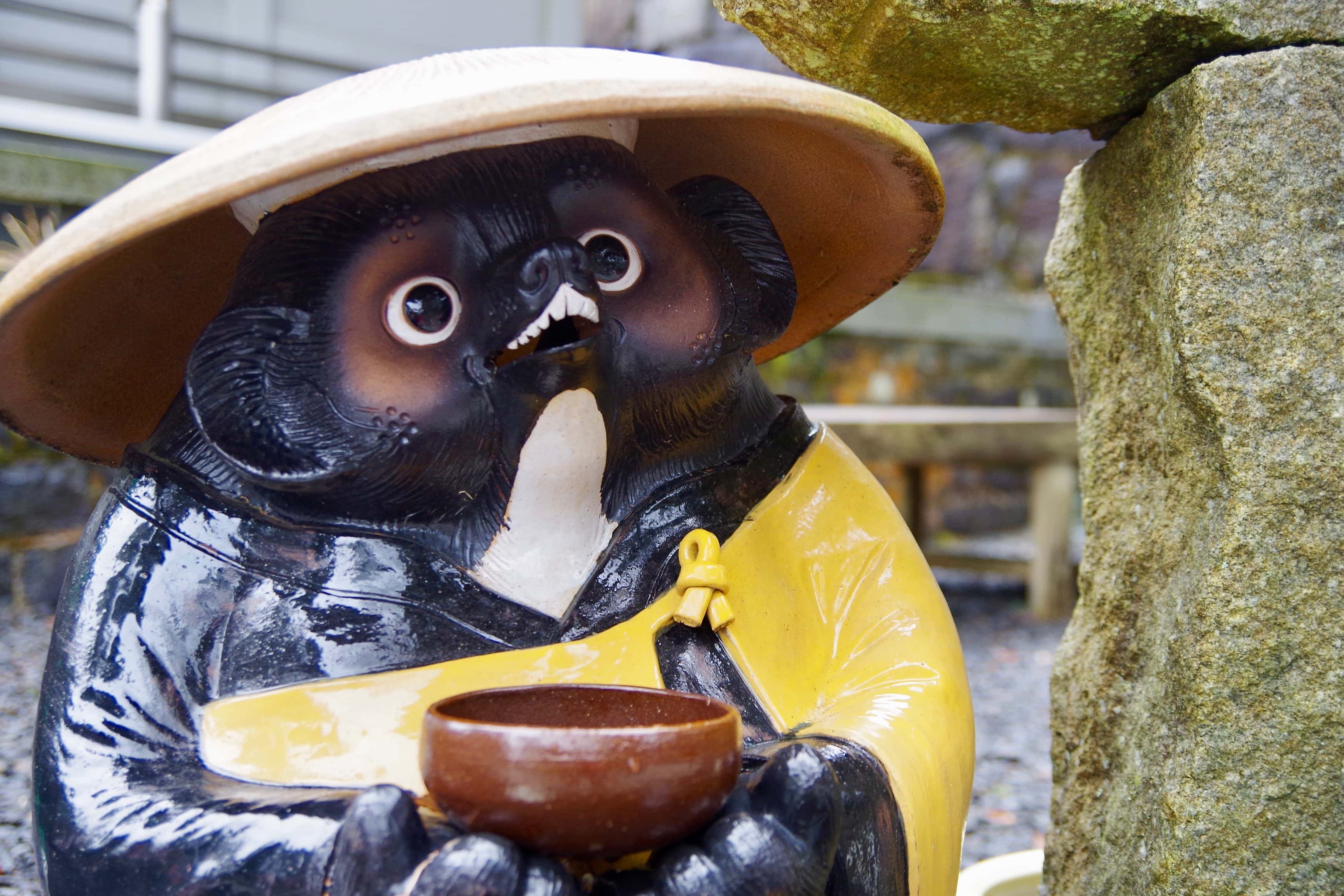 When Saekimao (name of Kobo Daishi before he became monk) was sixteen years old, he wanted to build a temple (nowadays known as the Zentsuji temple) at his birthplace. He came to the mountain for picking some woods and fortuitously met this silent place which touched him so much that he built a Buddhist temple here which became the Unpenji temple nowadays. 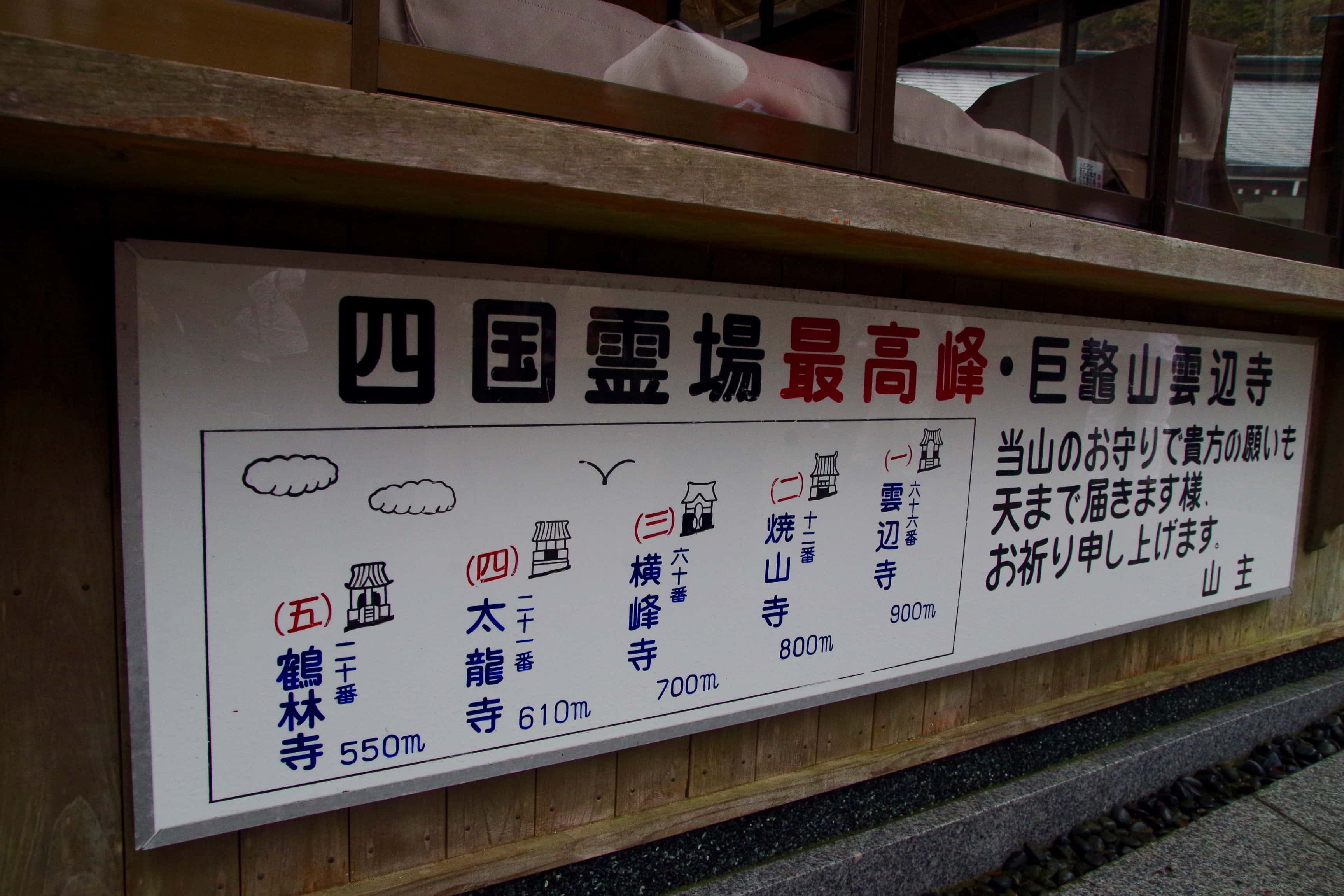 At 911 meter above the sea level, Unpenji temple is at the border between Tokushima and Kagawa Prefectures. Standing here on the mountain, you can enjoy the panoramic view of the Sanuki plain, the Setouchi Inland Sea and multiple mountains of Tokushima. If you look further, you can even see Ehime and Kochi prefecture. In the past, lots of monks came here for studying, so Unpenji temple got the nickname “Shikoku Kouya” which means the knowledge place,  like Kouyasan in Wakayama. 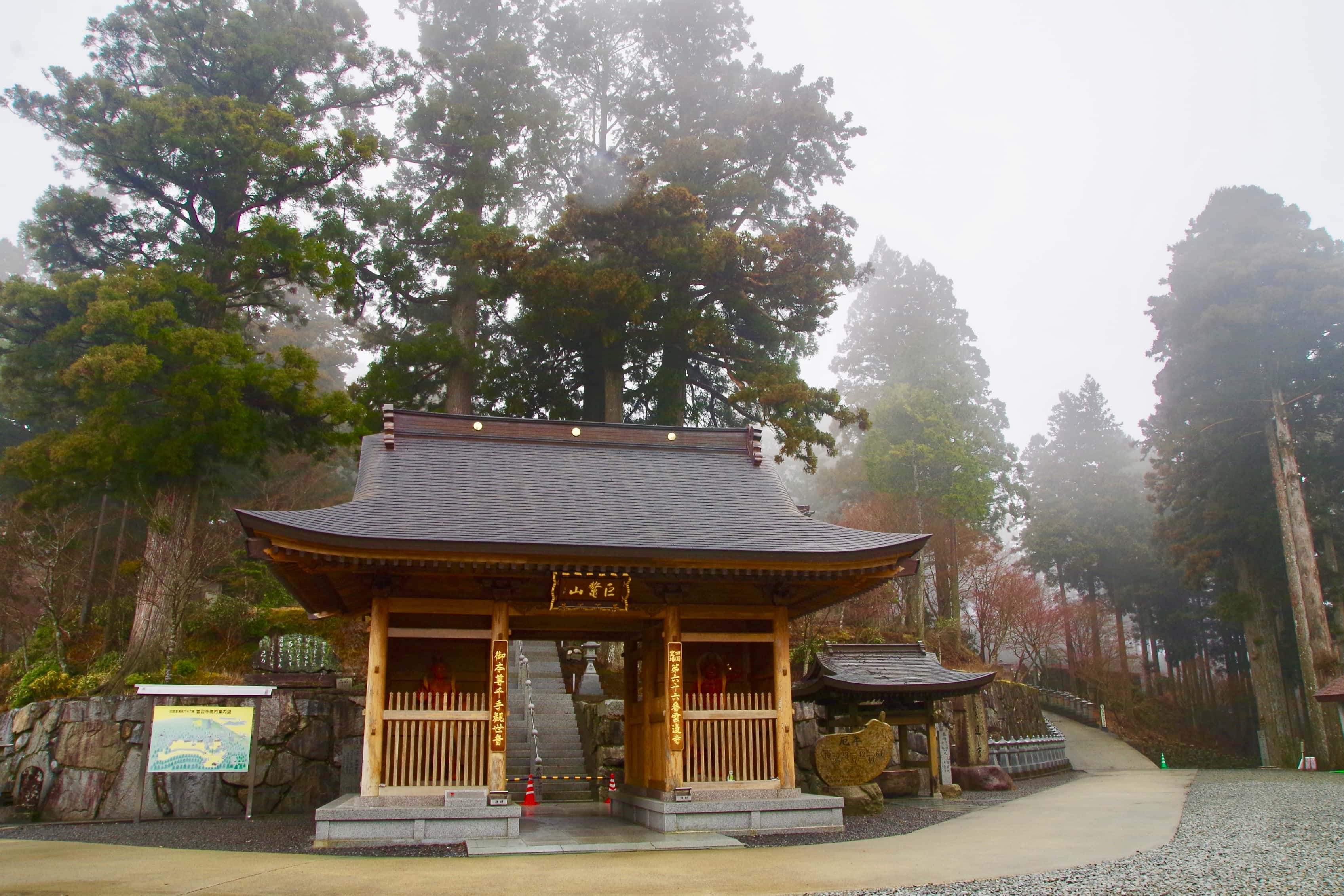 Shikoku 88 temples usually put the “Sango” (honorific mountain prefix – 山号 the first kanji means mountain) before formal temple name.  This customcan be traced back to the Sui and Tang period of China. As lots of temples are built in the mountain far from the city, it is more convenient to use the mountain’s name as the temple.

“Sango” was introduced into Japan from China with Buddhism, but the Japanese were already usingthe name of the place as “Sango” at that time. For example, the Shitennoji temple built by Prince Shotoku in the Asuka period (7th century)  is located at Arahaka (mountain name), so Shitennoji temple uses Arahaka as its “Sango”.

However with the Heian period starting the situation changed. Originally in the Asuka and Nara period, Buddhisttemples belonged to the powerful man of the land. yettheHeian period, birth time of Kukai (Kobo Daishi), places the monk in charge of temple.

Additionally, Buddhism in Japan also incorporatedthe traditional faith of mountains and became “Mountain Buddism”. Lots of monks left society and went to the mountains to build temples. From this time“Sango” started to beused as its real meaning. The Koyasan Kongobuji temple built by Kukai is the most famous example.

The “Sango” of Unpenji temple is Kyogozan. Kyogo (巨鼇) means “large sea turtle” originated from a Chinese old book telling the legend of a turtle supporting the Earth. Furthermore, Unpenji temple is locatedon ahigh place from whereyou can see the sea, so it also has connection withthe sea and gets the Sango name “Kyogozan”. 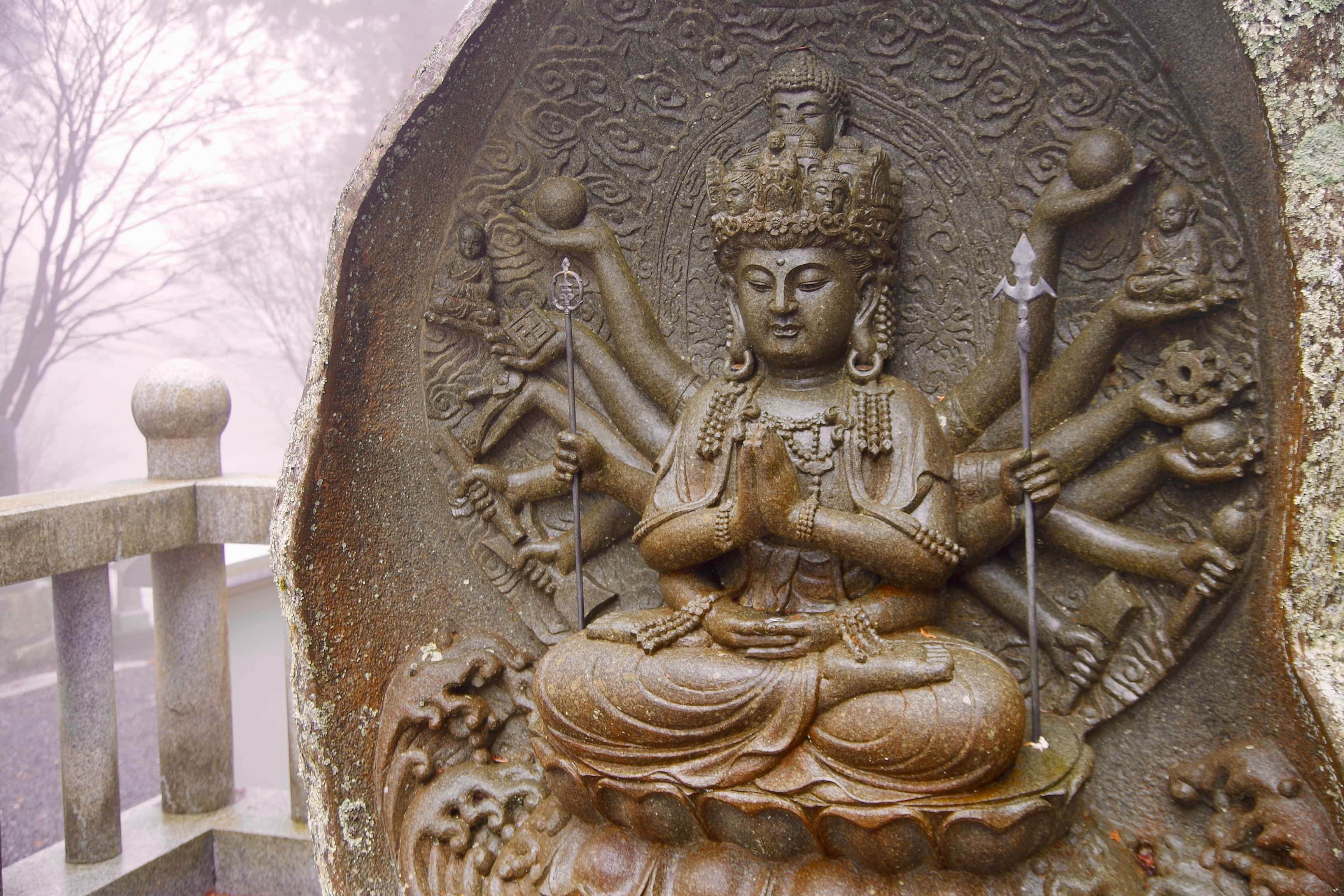 The Buddhism folklorist Mr. Gorai Shigerusays that the Senju Kannon worshiped in Unpenji temple is also related to the sea. It is believed so because of  Senju Kannon bodywhich is like the mast on the boat and the handson the backgroundwhich are like sailcloth while sailing. That is the reason why, in the ancient period, people would set a Senju Kannon sculpture at the bow of their boat to pray for safety while they sailed wishing to reach the far away Pure Land of Kannon named Fudaraku. 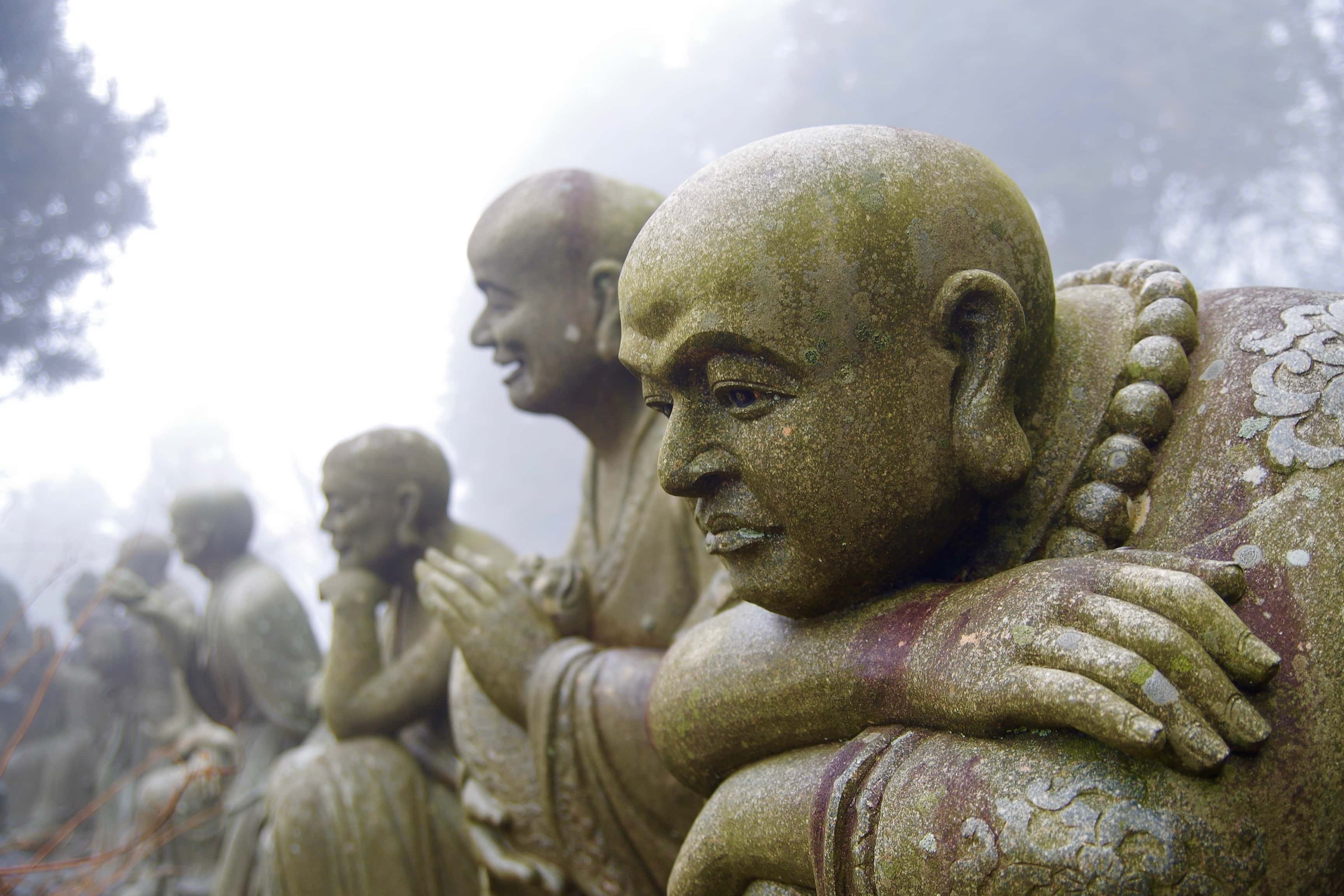 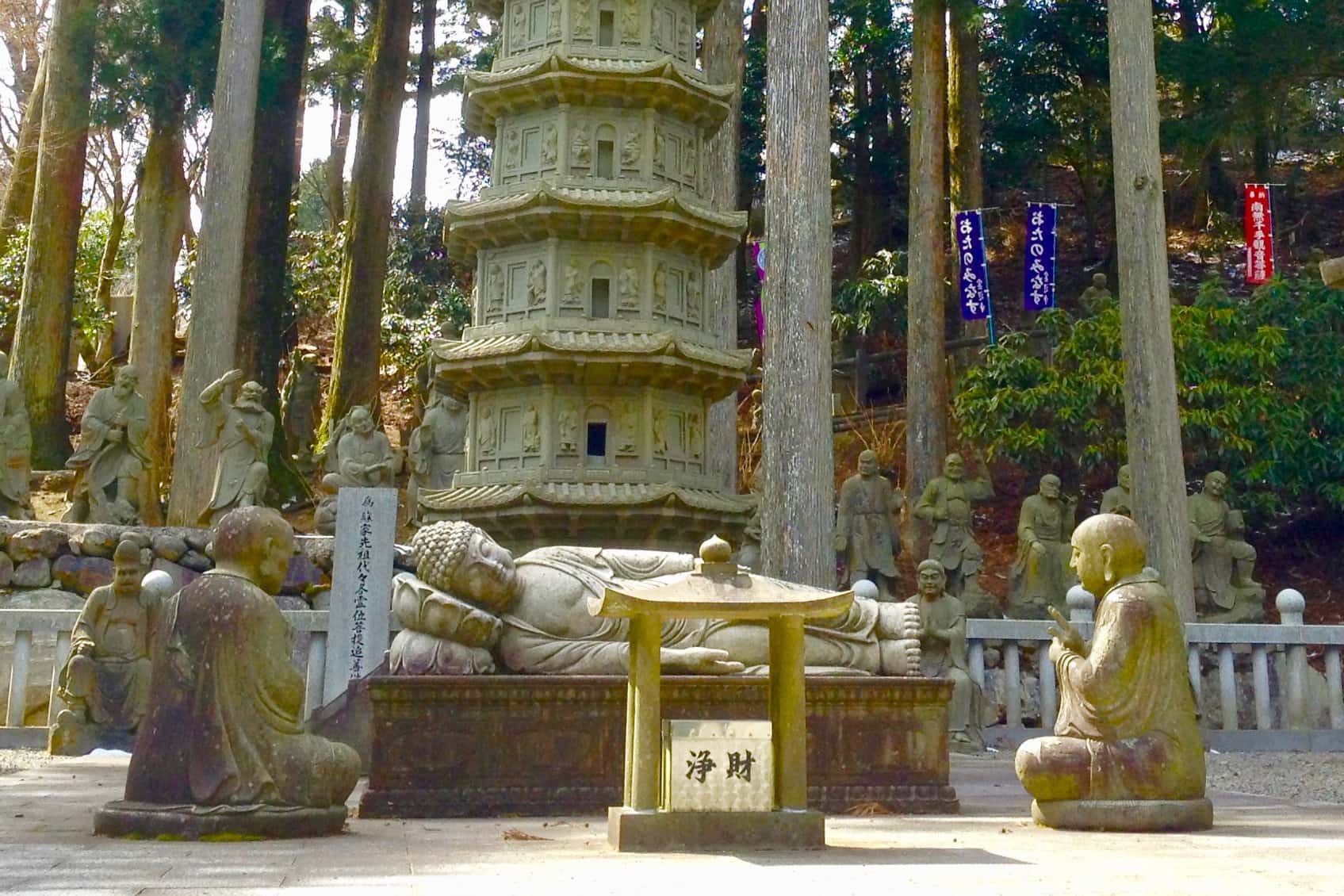 It is like the 500 Arhatswill get life and move at anytime giving you a stressing feeling while you walk along them. Thenthe sculpture of Buddha who reached Nirvana finally appears erasing all your uneasiness. Time seems to stop and as you cannottake youreyes off the sculpture you enterinto meditation. 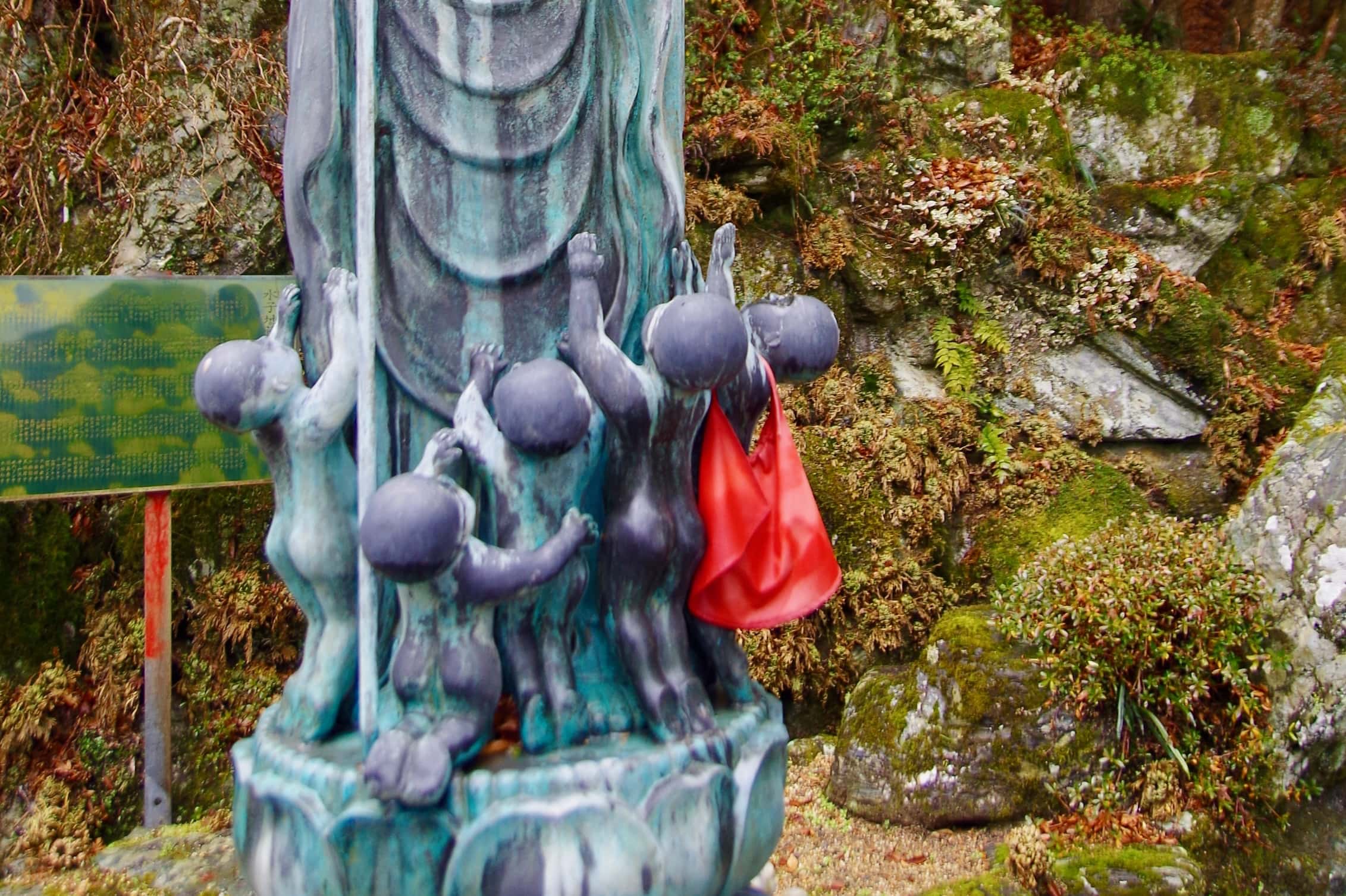 Nearby Noukyousho (the office where you can obtain a temple stamp “noukyou-shuin”), there is the Mizuko Jizo (Jizo who comforts the souls of dead fetuses or stillborn babies). It is one of the still unknown power spot of Unpenji temple. The children surrounding the Mizuko Jizo are so moving as they hope to be saved clinging to the cloth. Bearing this sad mood you will finally arrive to the Daishido (hall for the Great Teacher), the heavy feeling disappearing while you visit the Jibokannon. 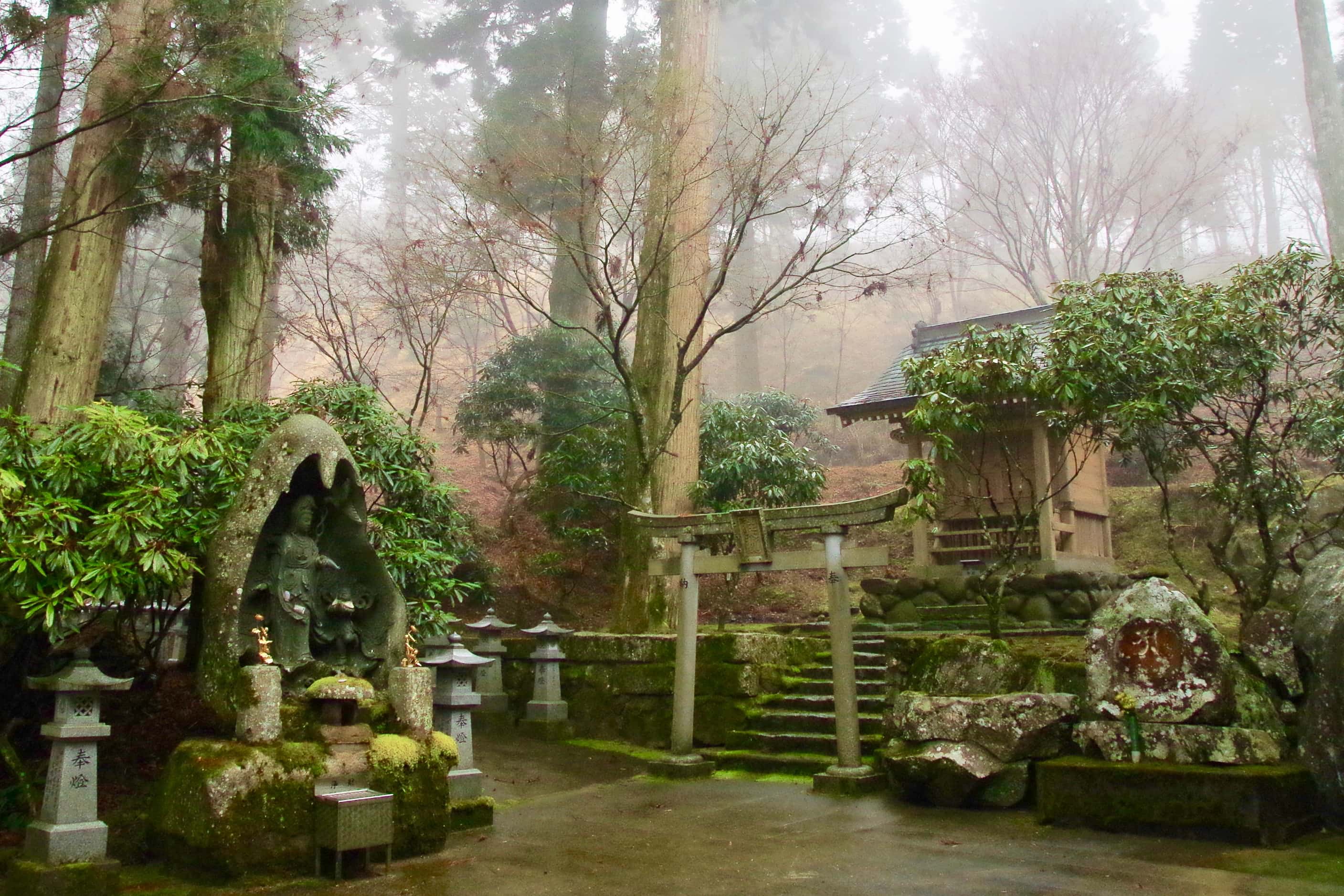 There is a stone torii nearby the Jibokannon leading to a shrine worshiping Gosha Daigongen (the Great Avatar of five shrines) protecting the Unpenji temple. Gongen is the god mixed betweenShinto and Buddhism before Meiji restoration. In other words, Gongen is the BuddhistBodhisattva who giveshape tothe Japanese god. Later becausethe emperor Meji wanted to make Shinto as the state religion, he ordered to separate Buddhism and Shinto. However, syncretism of Shinto and Buddhism haddeeply penetrated into the folk culture so it was really difficult to separate them. That is the reason why we can still see Gosha Daigogen here nowadays. 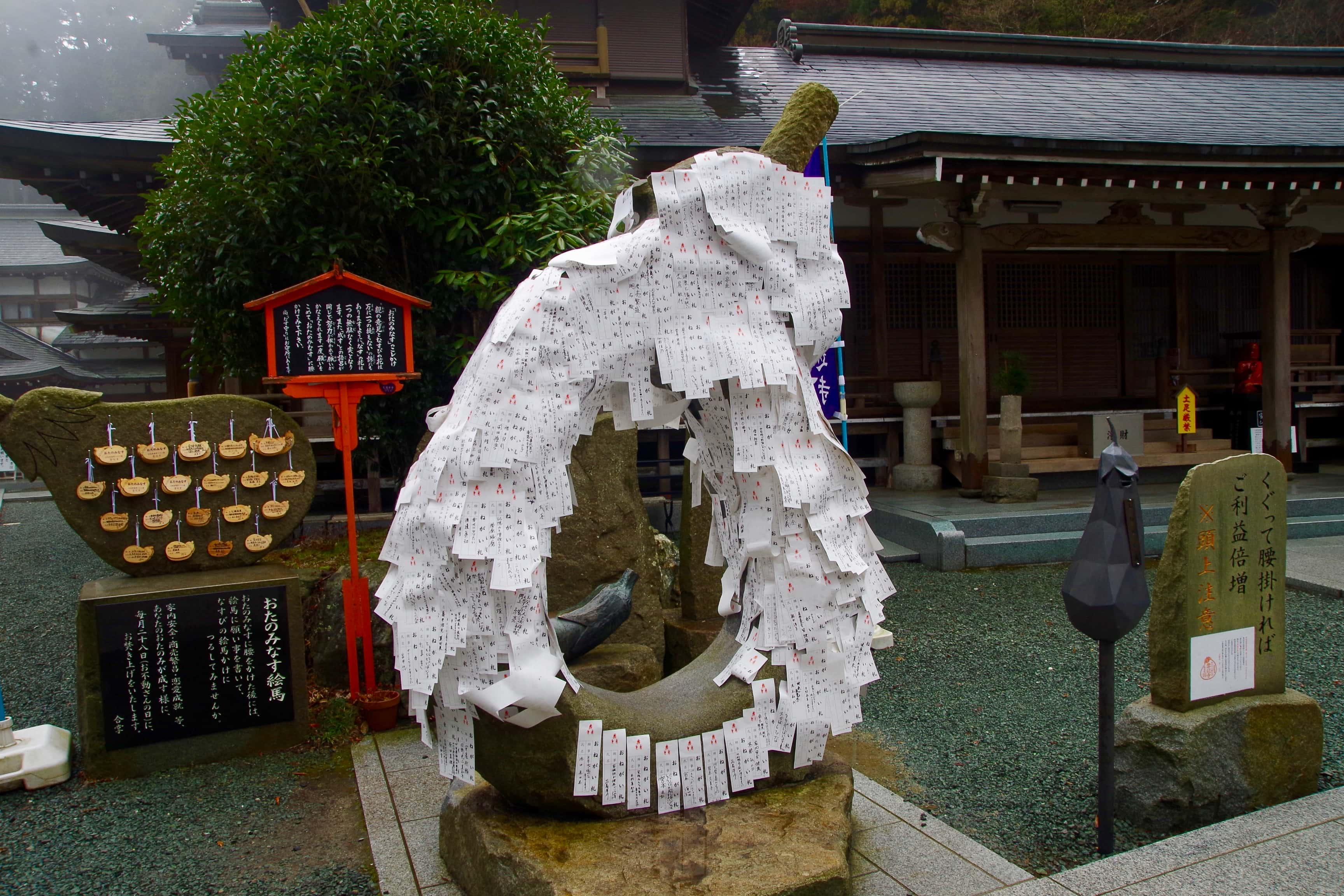 Otanominasu is anotherwell-known spot in Unpenji temple. Eggplantsbloom then bear fruits, so it is considered as a good omen in Japan. Additionally, the Japanese pronunciation of eggplant is “Nasu” (なす)which sounds like “complete” (成す) in Japanese. People believe that goingthrough the holeof the stone eggplant then sitting on the Otanominasu behind it and writing the wish on eggplant-shaped Ema (lucky wooden card) can make the wish come true.

Besides, you can pray for safety, get rid off bad luck and be exorcisedin Unpenji temple. You will easily understand it in front of the main temple onceyou see the exorcism box. 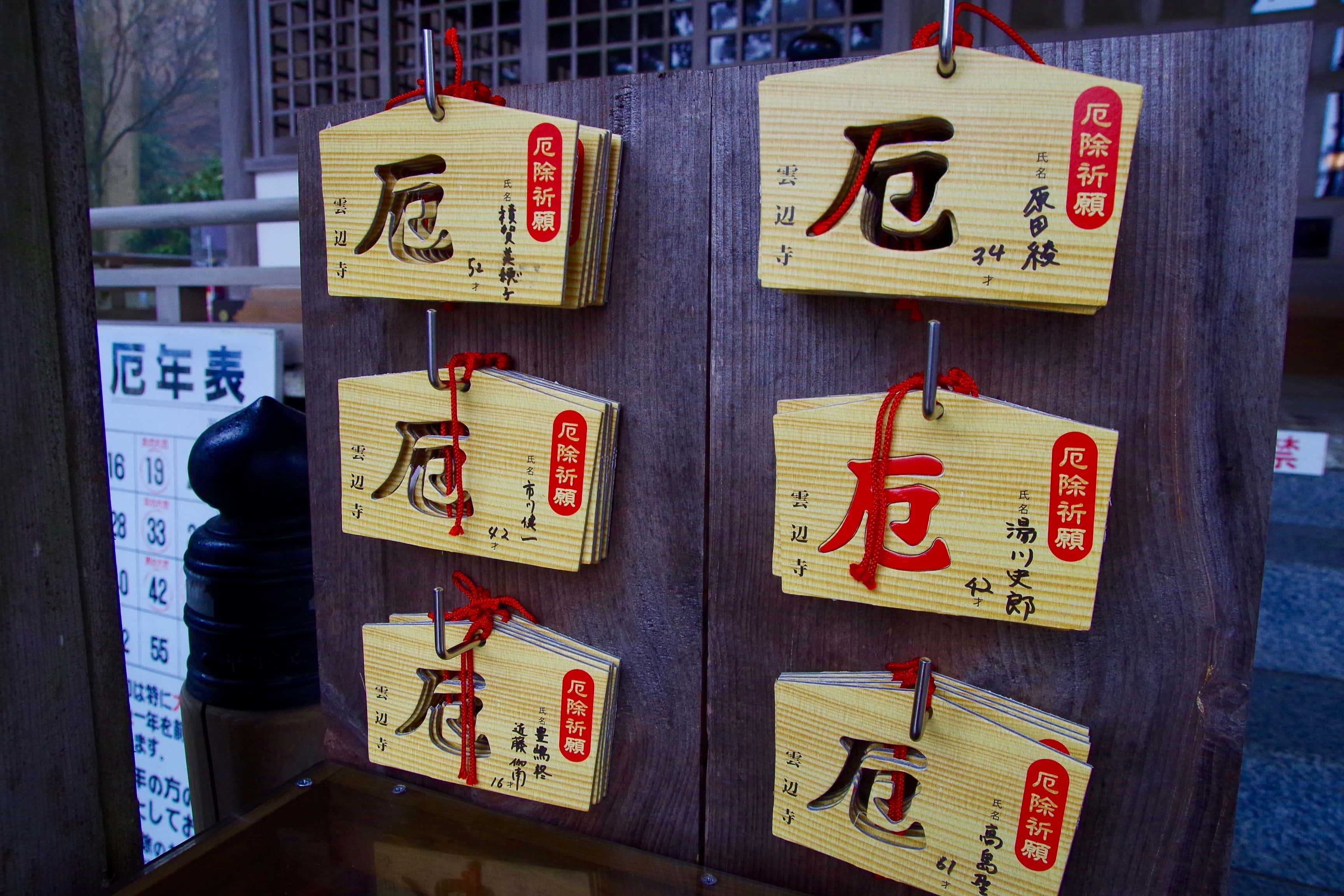 Here there are ema carved with thecharacter “厄”(aku) representingthe misfortune . Writedown your name and age on the card then push the character, “厄” will fallinto the exorcism box with all your misfortune. At last, hang up the Ema and prayfor getting rid of the bad luckthis year. Your exorcismis completed. 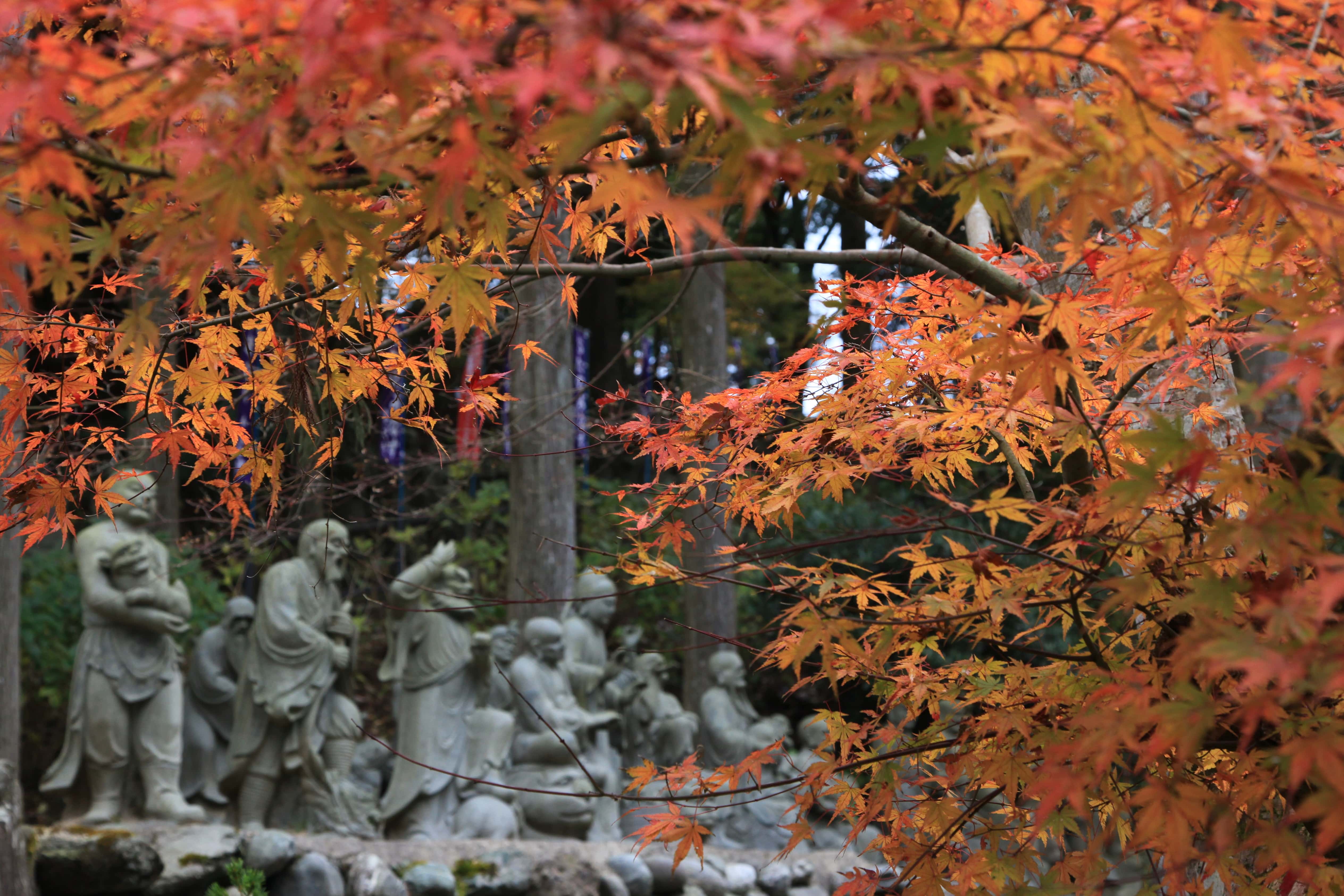 Besides visiting Kobo-Daishi to pray for safety, you can enjoy different scenes of Unpenji temple in different seasons. For example, the 500 Arhatswill get more conspicuous with hydrangea in summer; However, they will get a solemn atmosphere with the white snow covering them in winter. Additionally, in autumn the red leaves in front of the temple gate and the ginkgo biloba behind the Kosodate Jizo (child-raising Jizo) become the most attractive spots. 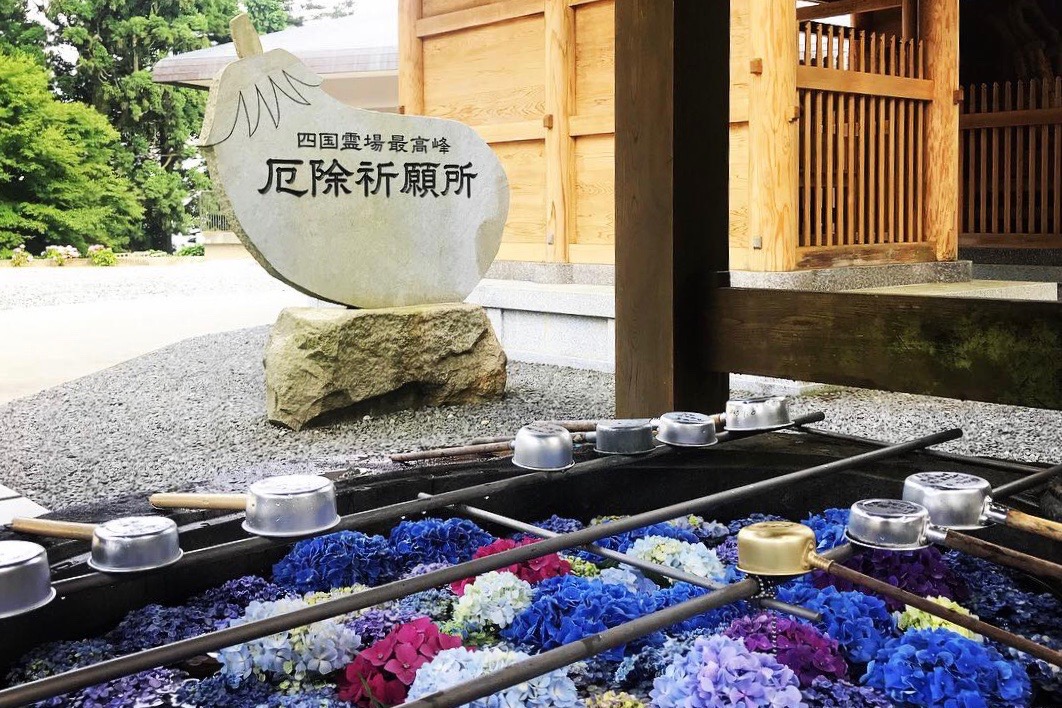 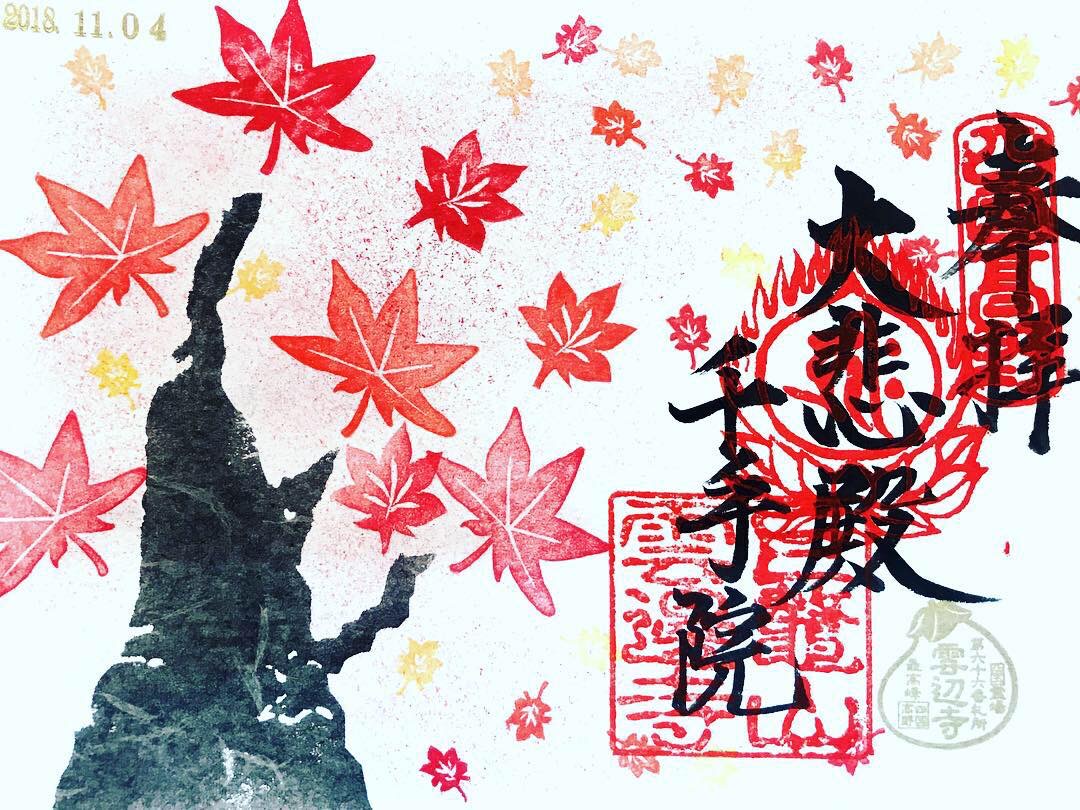 Unpenji also launch hydrangea Omamori (Japanese amulet) and red leaves Shuin (seal stamp given to worshipers) during special periods. When the rainy season started  you can enjoy view of hydrangea taken from the mountain and floating on the water surface of Temizuya, the water ablution pavilion used for purification before entering the temple, creating a serious while gentle atmosphere.  If you have time to visit here, just walk slowly and enjoy all these beautiful aspects of Unpenji temple.

Access:
By car: Get off at Onohara interchange of Takamatsu expressway then 15-minute drive.
By train: Take JR train to JR Kanonji (観音寺) station, then take a taxi to Unpenji ropeway (about 24 minutes), or take bus Gogo-Takamuro line (五鄉高室) and get off at Tanigami (谷上) stop
then follow the signs (about JPY100). 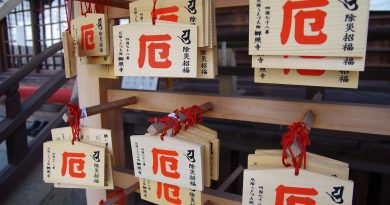