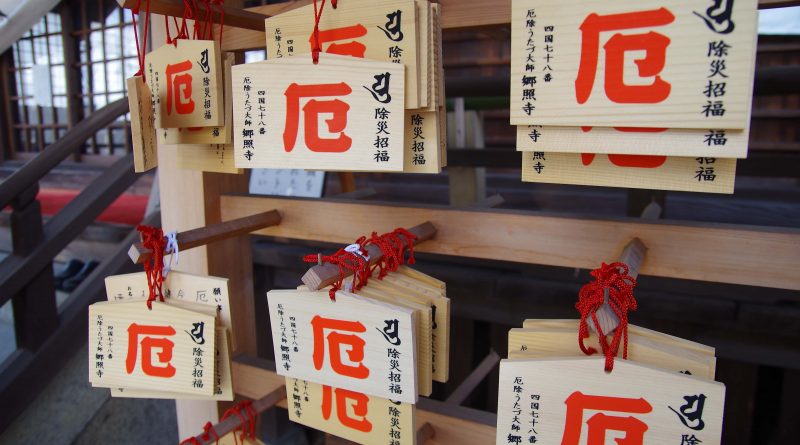 Goshoji, the 78th temple of Shikoku Pilgrimage, is located in the south of Utazucho in Kagawa prefecture, on a higher terrain at the foot of Aonoyama mountain looking like a lighthouse illuminating the Utazu port. In the Edo period, lots of pilgrims would take the boats from Osaka, Hyogo, and Okayama to Utazu, then start the Shikoku Pilgrimage from here.

It is said that the Goshoji temple was built by Gyoki in 725, when he carved the statue of Amitabha as the main image and named the temple from it Bukkozan Dojoji (仏光山道場寺). In 815 during a pilgrimage with Shakujo in Shikoku, Kobo Daishi visited the Goshoji temple. There he strongly felt that the place is related to Buddhism, and carved a wooden statue of himself wishing to ward off evil from people. Since then, the temple has been called Yakuyoke Utazu Daishi (厄除 うたづ大師), Evil Repelling Utazu Daishi, and lots of believers come to visit the sacred place.

In 1288, Ippen Shonin (一遍上人), the founder of Jishu sect (時宗), visited the temple and built a training hall temple to promote the Amitabha faith of the Jodo sect (浄土宗). During this period, the training hall was unpopular and declining, and Ippen Shonin helped to revive it. Unfortunately during the Tensho period (1573-92), the temple took fire and burned to the ground. As time passed to the Edo period, Matsudaira Yorishige, the lord of Takamatsu Domain, helped to rebuild the temple and renamed it Shogoji temple in 1664. Besides the original Shingon Buddhism (真言宗), Shogoji temple also worships the Jishu sect to in memory of Ippen Shonin, the only place where two sects are worshiped in Shikoku Pilgrimage.

The Koshindo (庚申堂), at the front right of Nokyosho (納経所), worships the Shomen Kongo (青面金剛, Blue-Faced Vajra) who has the power to get rid of the disease. “申” is the 9th of Earthly Branches, and also represents the monkey in the Chinese zodiac. Besides, in Japanese, “monkey” is pronounced “saru さる” same as “saru 去る” which means “leave and remove”, so people believe that they can get rid of disasters and troubles when they visit the Koshindo.

Three stone sculptures are standing between Koshindo and the main hall. From the left side, they are Kobo Daishi, Jizo (Ksitigarbha), and Amitabha who are called Sanuki Sandai Pokkuri Sama (さぬき三大ポックリさま). In Japanese, pokkuri (ポックリ) means sudden death, and as an aging society in Japan, the pokkuri belief got quickly popular among elders. Anyone does not wish for a life with diseases and pains for theiry old days, all prefer to go peacefully when their time come.

The Amitabha worshiped in the main hall, is the Buddha who relieves people through the infinite light. If people recite Namo Amitabha (南無阿弥陀仏), the Amitabha will bring them to the Pure Land once their time comes to attain the Buddhahood. This is the Buddha incantation of Jodo Buddhism.

The Gokosho (五鈷杵), also named Kongosho (金剛杵), placed in front of the main hall is a ritual implement which Kobo Daishi brought back to Japan from China. It is said that by a light touch it can get rid of evil thought, annoyance, and misfortune.

Going up to the main hall by the step on the left side, here is the Daishido (大師堂) worshiping the statue of Yakuyoke Daishi.

Lots of temples in the Shikoku Pilgrimage mix religion and art together. In the Goshoji temple, you can find amazing ceiling paintings with square decorated of colorful flower reliefs in the main hall and Daishido. In the Heisei period (1989-2019), many traditional architectures were involved in the large-scale renovation work which people called the Great HeiseiRenovation. About 250 ceiling paintings of the Goshoji temple were collected from all of Japan and set up during this period.

The Awashima Myojindo (淡島明神堂) which was built by an eminent monk named Mokujiki Shonin Iku, is located just behind the Daishido.

In the early Edo period, an epidemic disease in Sanuki province was touching women after childbirth. When the Iku Shonin visited the Goshoji temple, people asked for his help. The great monk built this hall and worshiped Awashima Daimyojin who is the patron saint of the women. He made a prayer in front of Buddha for all the women who visit, wishing that they all could be healthy, live happily, find a good match, and give easy birth. That is the reason why lots of women will visit here to pray for an easy childbirth or a good match.

During their life, people meet some difficulties and hardships, during those time of despair they will hope that Gods could get them rid of their misfortune and protected their future. Kobo Daishi and Iku Shonin are famous for mercy, so do not forget to burn incense sticks or light a candle to pray for the safety and health of your family. 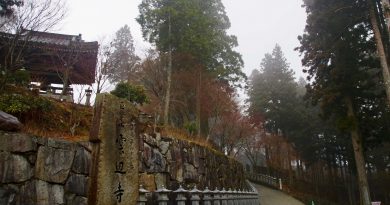