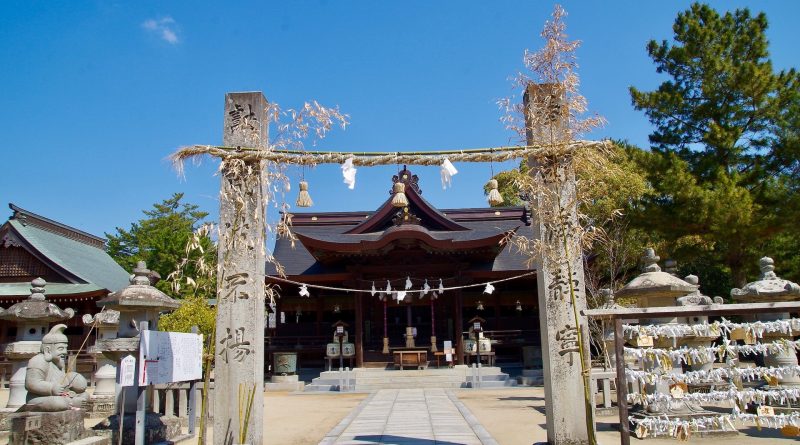 The Shikoku Pilgrimage starts from the Tokushima prefecture, and goes through the Kochi and Ehime prefectures, to ends in the Kagawa prefecture. There are lots of temples in this area. However, not only temples but also shrines are famous in Shikoku. In the ancient time, there were two the most famous shrines in the Kagawa prefecture. One was the Konpira Shrine located on the west of Kagawa, and the other one was the Shirotori Shrine located on the east of Kagawa.

The origin of Shirotori Shrine

Yamato Takeru was a Japanese legendary lord who appears in myth. He is said to have conquered the Kumaso (a strong tribe from the south of Kyushu) and the Ezo (the ancient name of Hokkaido). According to the myth, he became a white bird after his death.  The bird then flew to the west and took a rest on a stone at the sea of Sanuki where a feather remained when it left. That place took the name Tsuruwa (meaning the feather of white crane). After his rest, the bird kept flying to the west again until he finally fall at the Matsubara in the Okawa district. 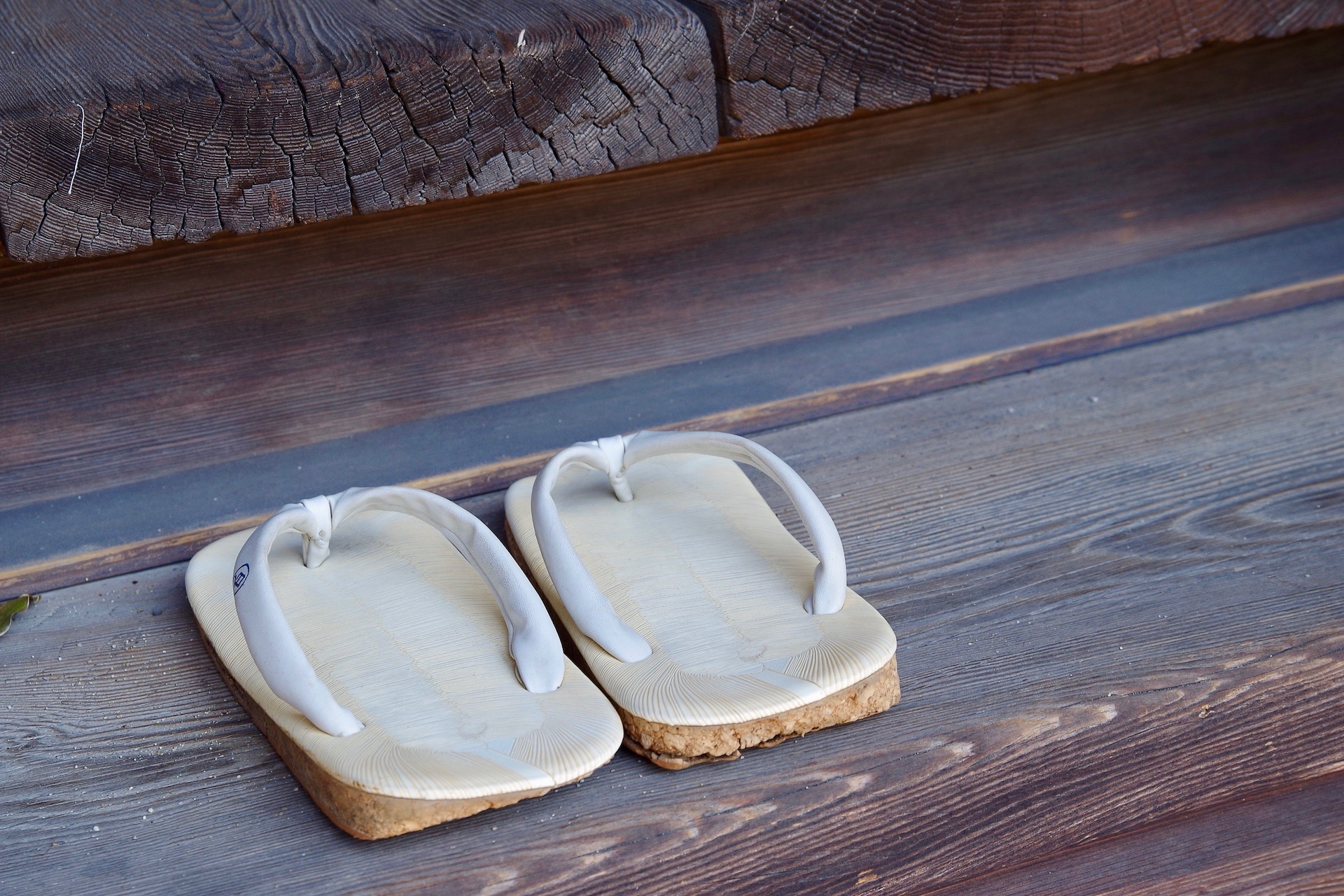 After the white bird death, the son of the emperor Yamato Takeru buried the legendary craneand built a shrine to worshiping his memory. This is the origin of Shirotori Shrine.

In the last Heian Period, the samurai Minamoto no Yoshitsune visited the Shirotori Shrine where he prayed for the victory before fighting against Taira no Munemori at Yajima. Afterwards he conquered the Taira clan, and “Yamato Takeru” was seen as the God protector of samurai. 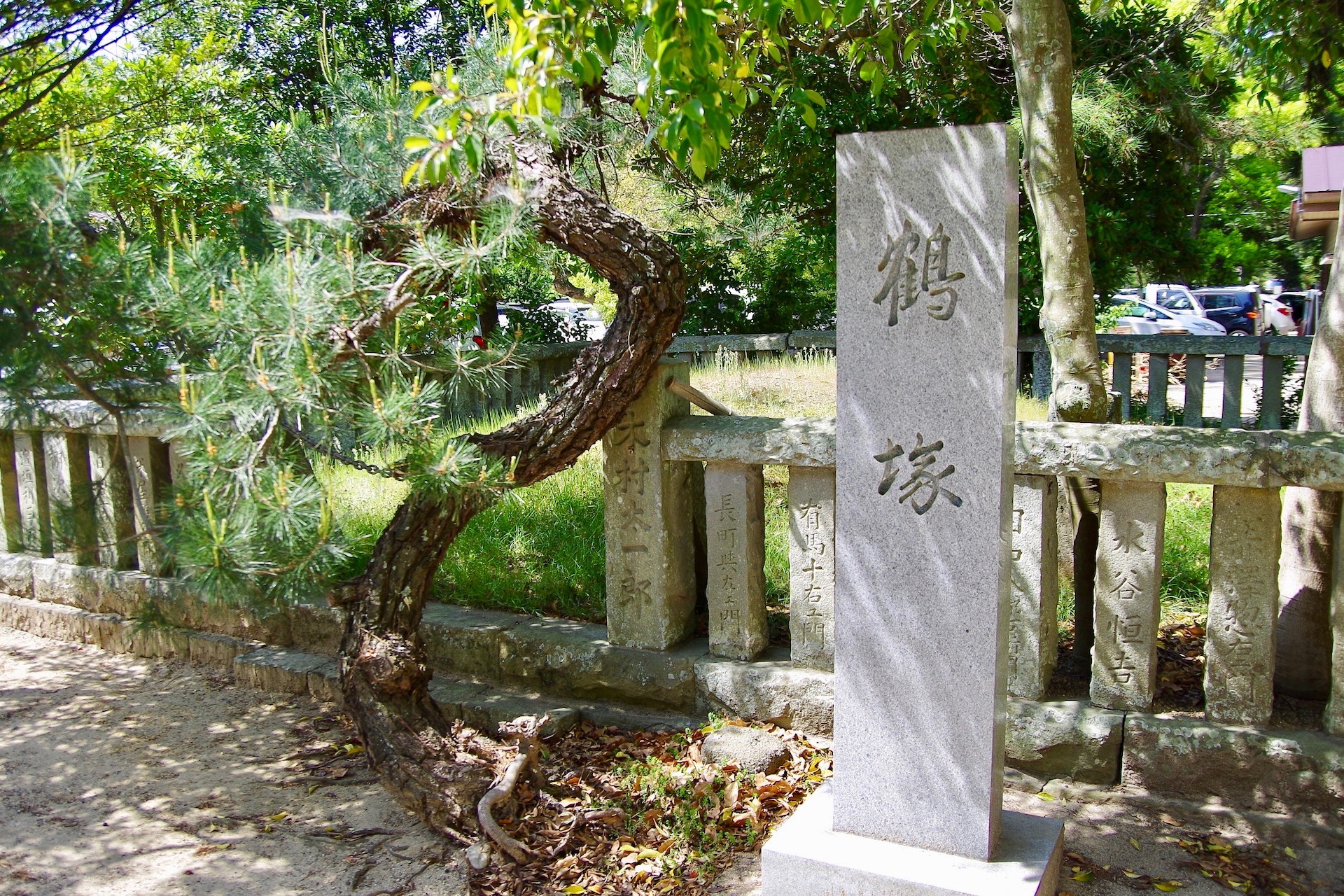 A mound of the crane is in the Shirotori Shrine. Lots of people think it is the place where is buried Yamato Takeru under his form of a white bird. However, that is not the case.

In the Edo period, the Takamatsu Domain had high regard for cranes and ordered people to protect the cranes which was injured or sick. However, the report procedure was complicated and people just drove injured crane away or through dead cranes into the Shirotori Shrine at night. This is the sad truth behind the mound of the crane, not the tomb where is buried Yamato Takeru as a white bird.

The Sanuki Shuinchi condensed the faith

The Shirotori Shrine caught fire once during war. Fortunately, Matsudaira Yorishige, the lord of Takamatsu, helped to rebuild the shrine which even got the Shuinjo (a license to use a red seal, high distinction seal) from the fourth Shogun, Tokugawa Ietsuna,  becoming a Shuinchi. 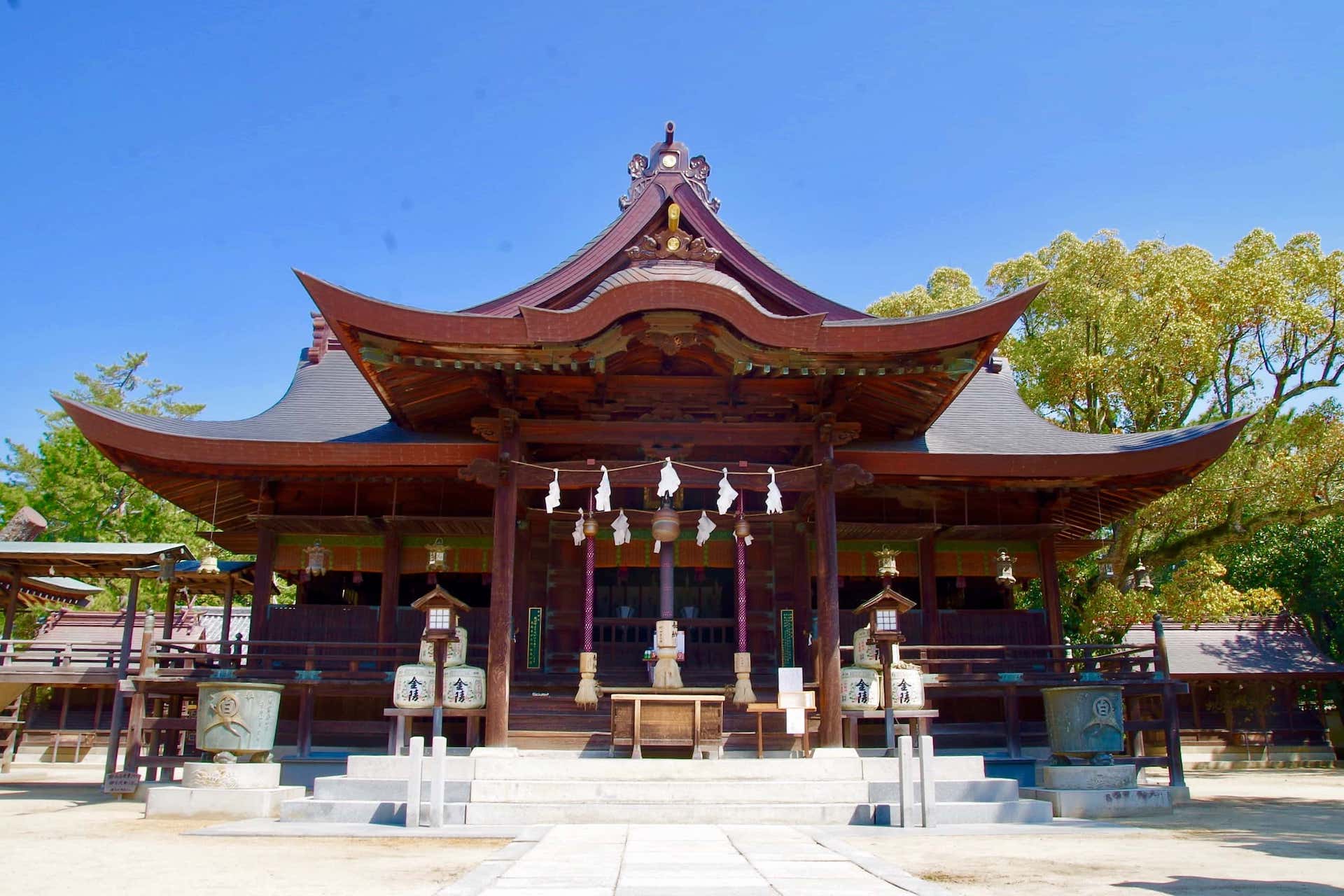 A Shuinchi is an area belonging to temple or shrine accordingly to the Shuinjo (the license). A schuinchi can not be bought or sold, and do not need to pay taxes. It is an honor for temples and shrines to receive the Shuinjo as they gain more autonomy. In the past, there were only three Shuinchi in the Sanuki Provinc:  the Shirotori Shrine, Konpira shrine, and Honenji temple. That explains the notority and importance of the Shirotori Shrine at that period.

Supported by the successive lords of Takamatsu and people’s belief, not only the people from the neighbor villages but also from the Awa area (Tokushima nowadays) founded many religious associations called Kou and dispatched representatives to visit the Shirotori Shrine. These associations ensured the number of visitors and also made Shirotori Shrine as important as the Konpira Shrine. 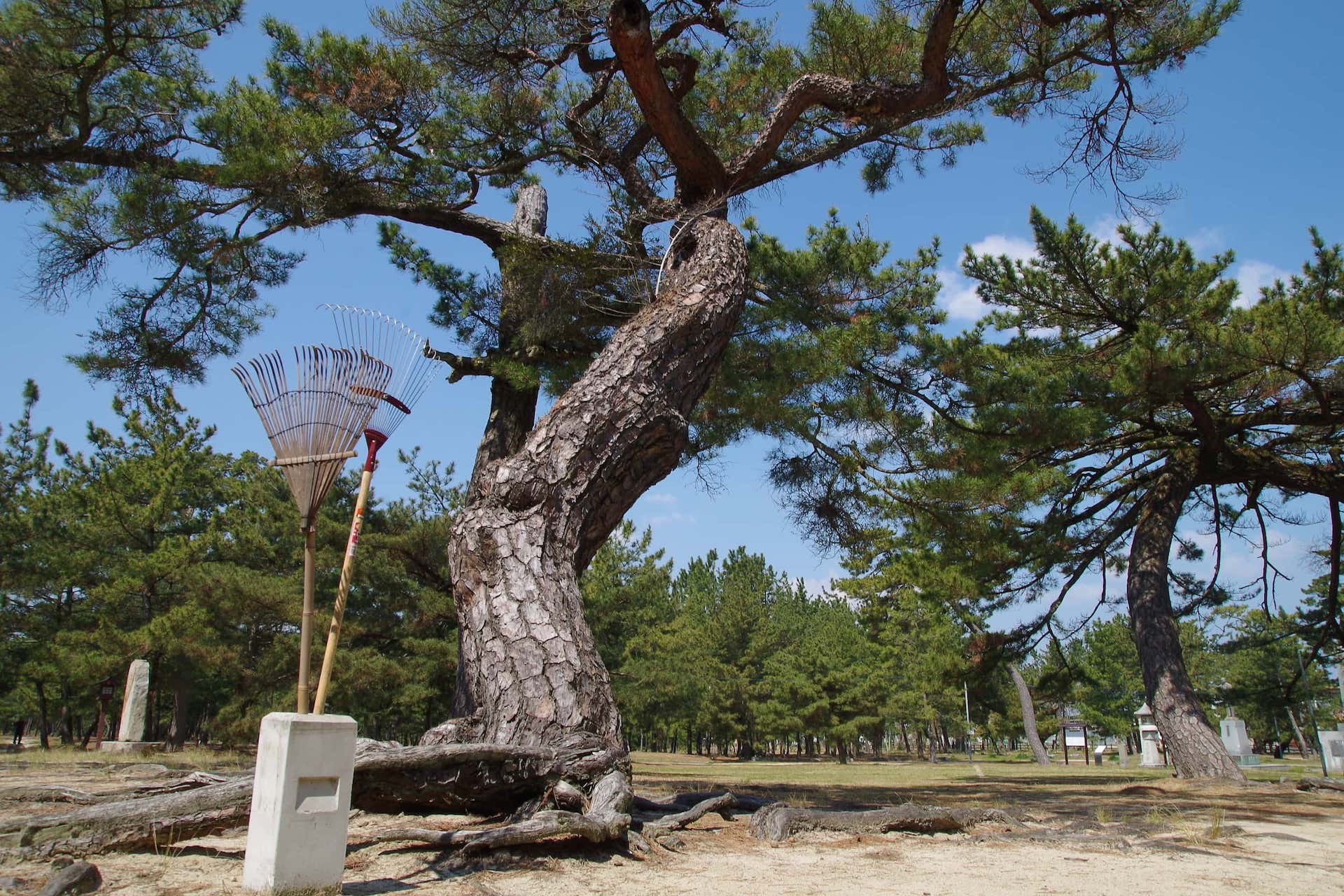 After the Meiji Restoration, the Shuinchi of Shirotori Shrine got back to the government because of the Agechi-rei (the law to revoke Shuinchi). Nowadays, Shirotori Shrine still has 130,000 square meters and is registred as one of 100 Best Beacheswith white sand and green pines in Japan.

The art and culture from ancient times to the present

In the Shirotori Shrine, people pray for health, good luck, to get rid off bad luck, and for the fortune in “wars” which is the most effective one. There is a Japanese archery court that hold the archery competition in New Year. There is also demonstration of Budo, Japanese martial art, on May 5th every year where participants show the brave spirit of Yamato Takeru. 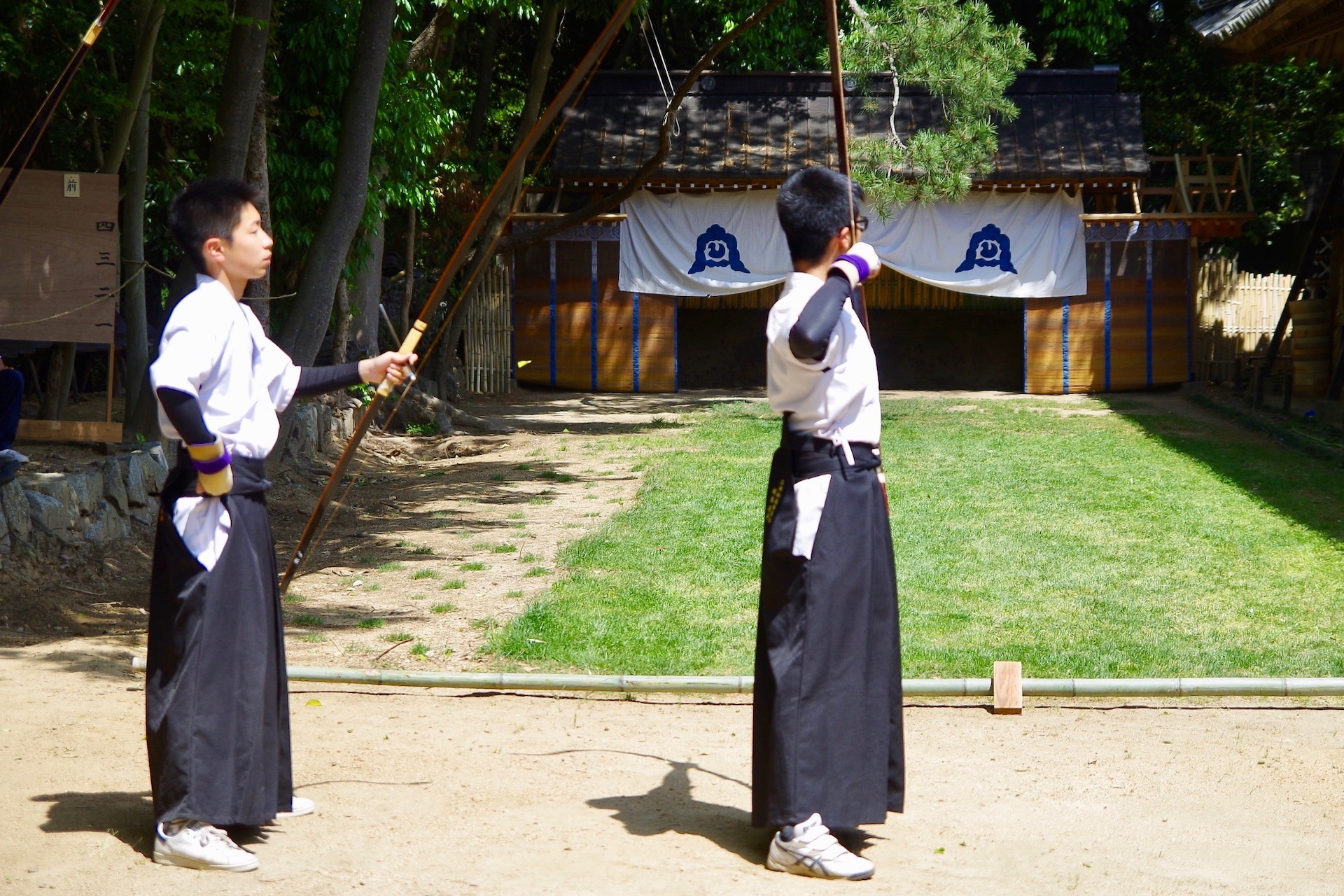 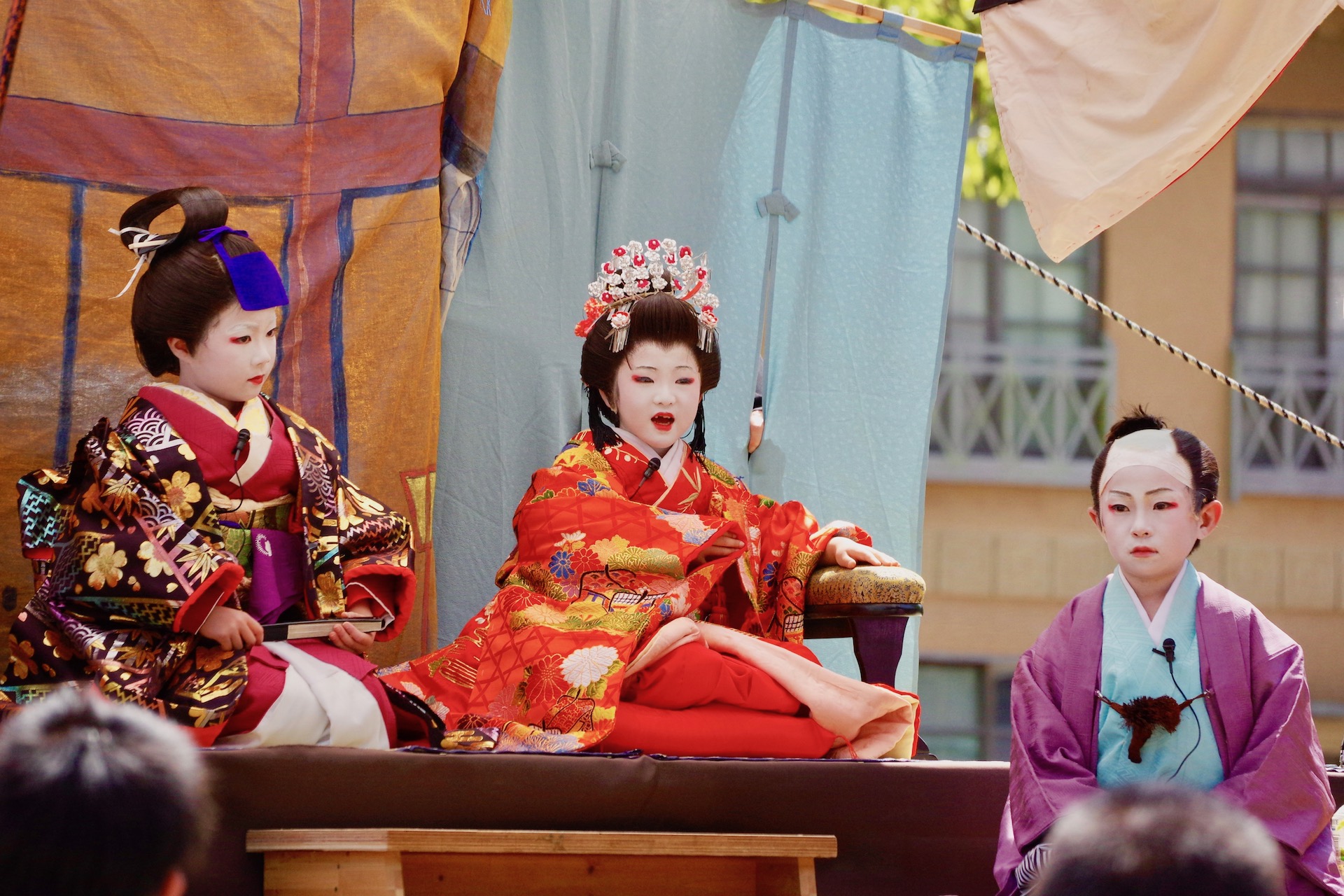 During the Spring Festival of the Shirotori Shrine (May 4 to 6), you should not miss the Danjiri Children Kabuki. This Intangible Folk Cultural Property of Higashikagawa city, is a Kabuki show performed by children on the top of floats. The history of this tradition can be traced to 1843. It is a performance for the god of the festival. 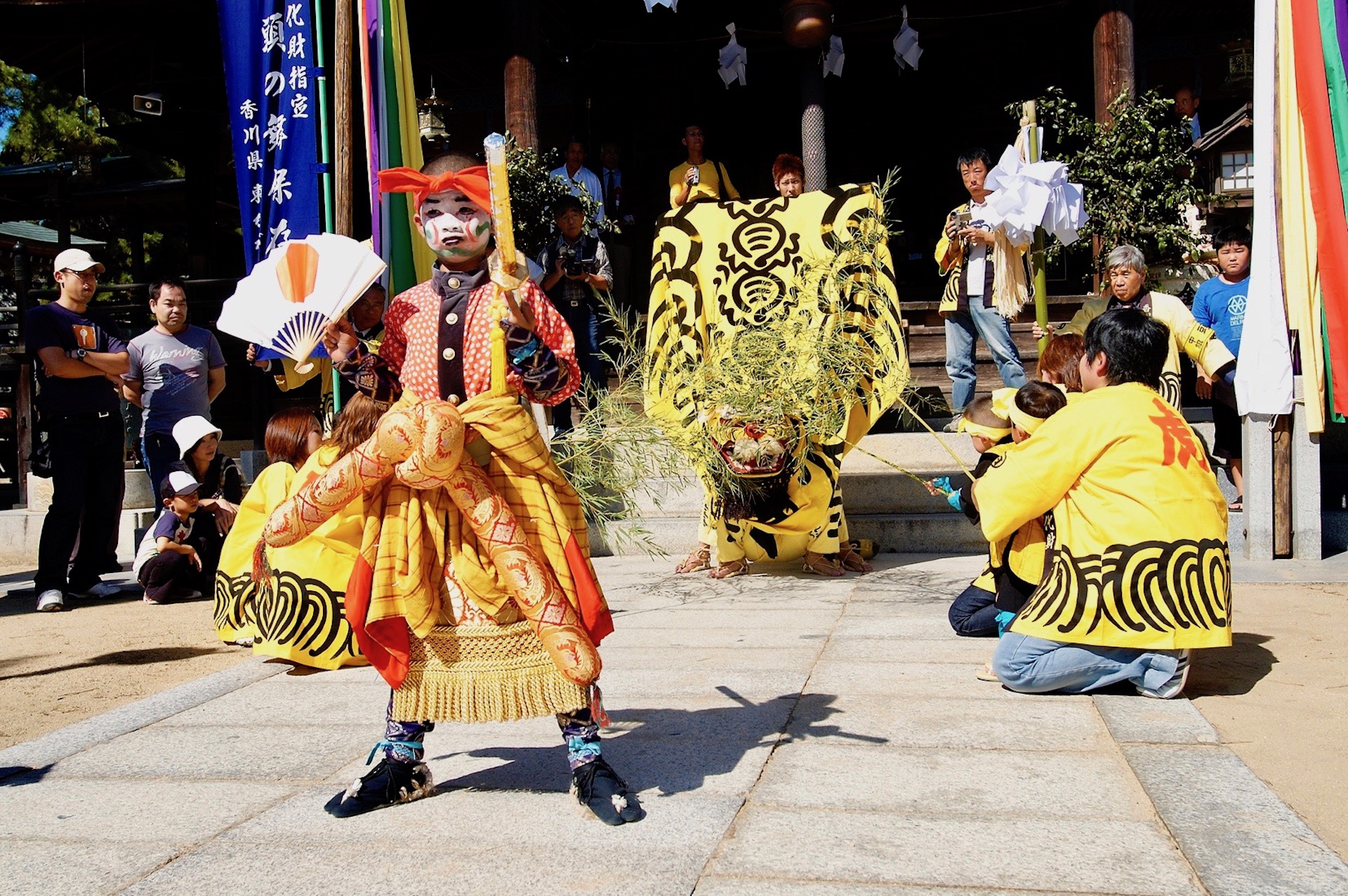 The tiger dance, an Intangible Folk Cultural Property of Kagawa prefecture, is another must-see performance happening during the autumn festival of the Shirotori Shrine (October 6 to 8). This tradition has pass through the last 300 years. The tiger dance, like the lion dance, is not only performed at the shrine but also visit the residents’ house to get them rid of bad luck.

A place fulfilled with historic atmosphere

During weekdays, few people come to the Shirotori Shrine so you can feel solemn atmosphere and  silence as if the time has stopped. Along the way to approach the shrine, there are lots of stone lanterns offered by the successive lords of Takamatsu and believers. The horizontal inscribed board, where it is writen “Shirotori Shrine” (白鳥宮), hanging in the Worship Hall is a donation made by the lord of Takamatsu, Matsudaira Yorishige and registered as an intangible Cultural Property of Higashikagawa city. 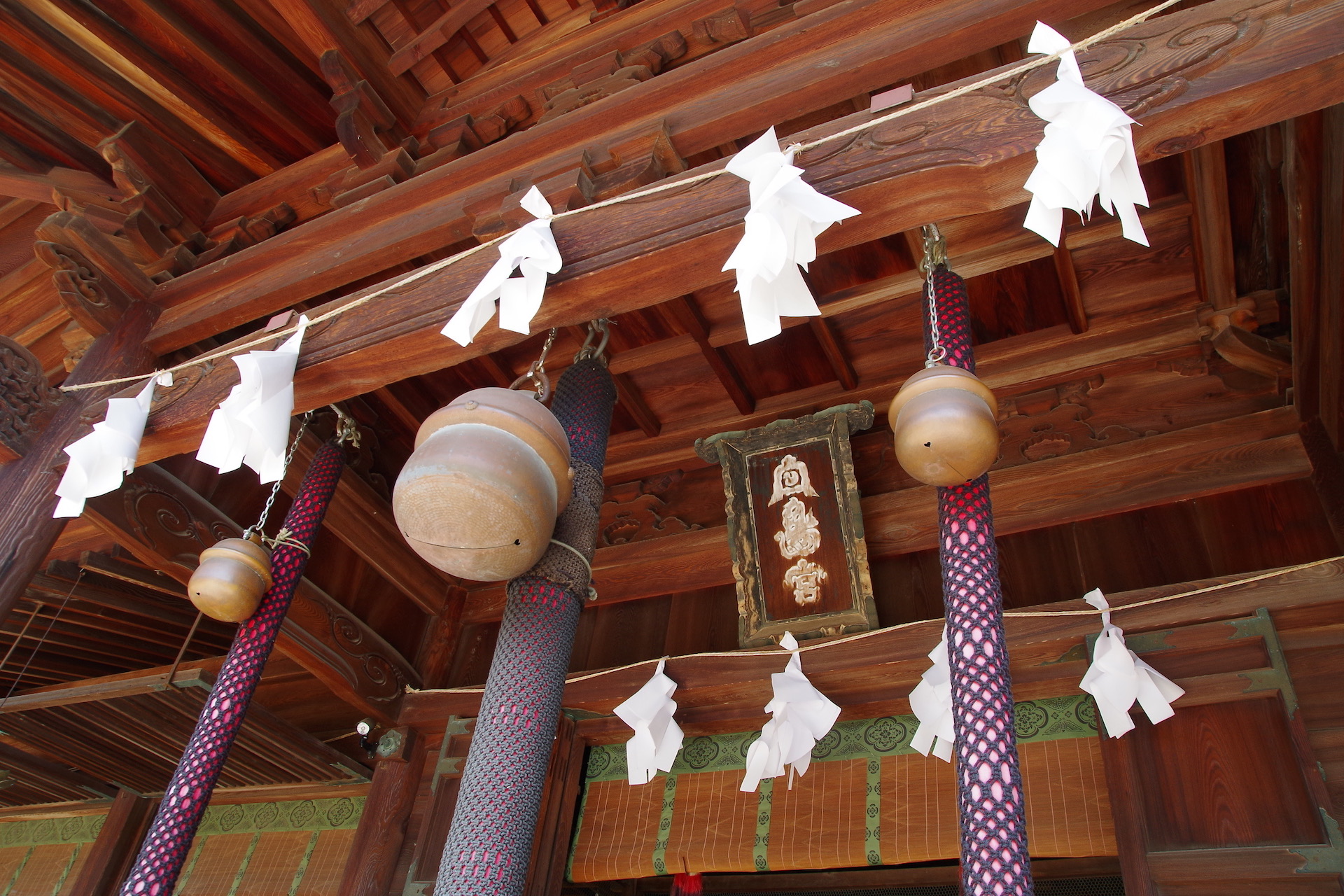 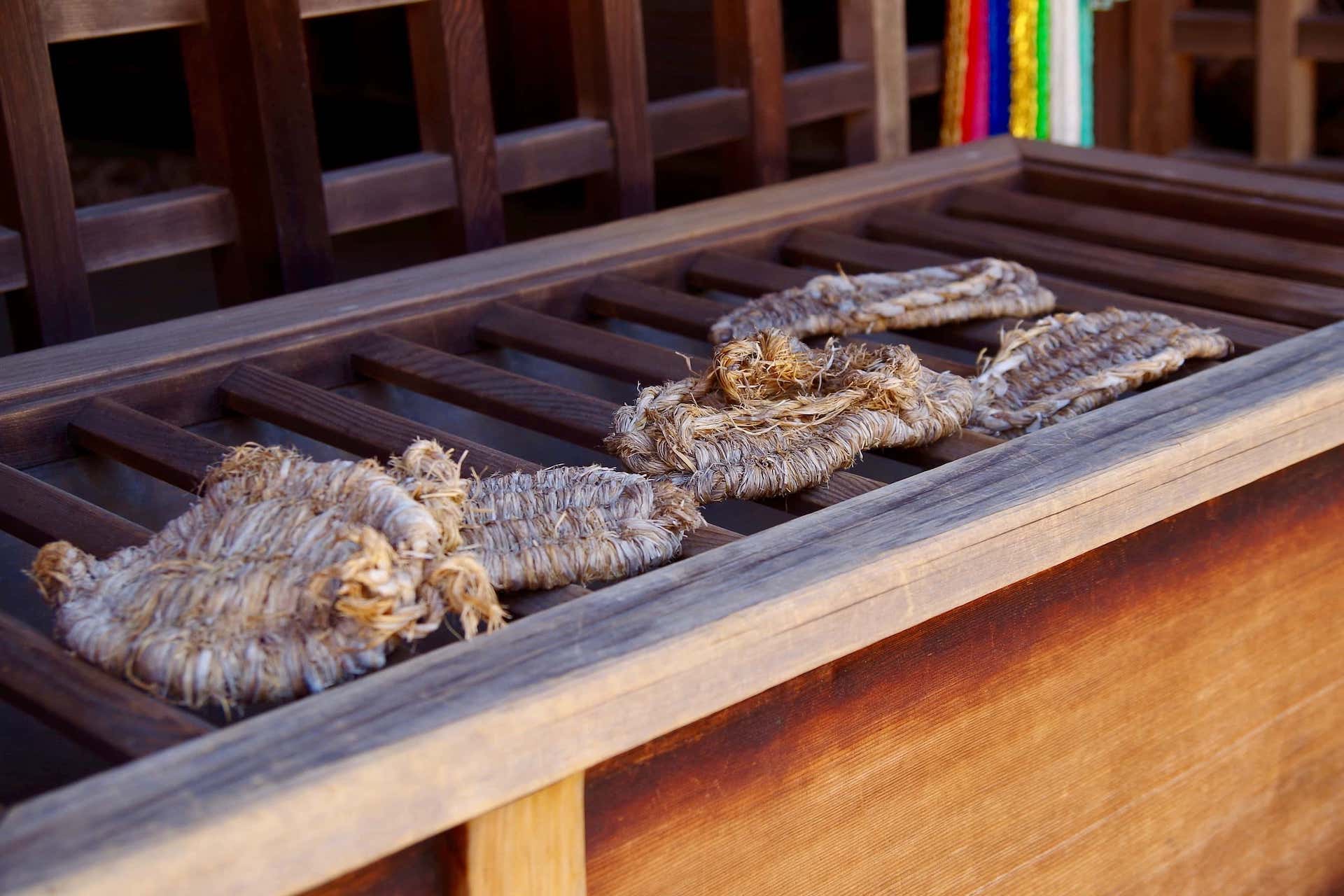 Facing the Worship Hall and going right, you can see a wooden sacred horse wearing straw sandals, and lots of straw sandals laying on the offertory box in front of the horse. People believe that illness and pain can be healed by using these straw sandals to touch the part of the body in pain. 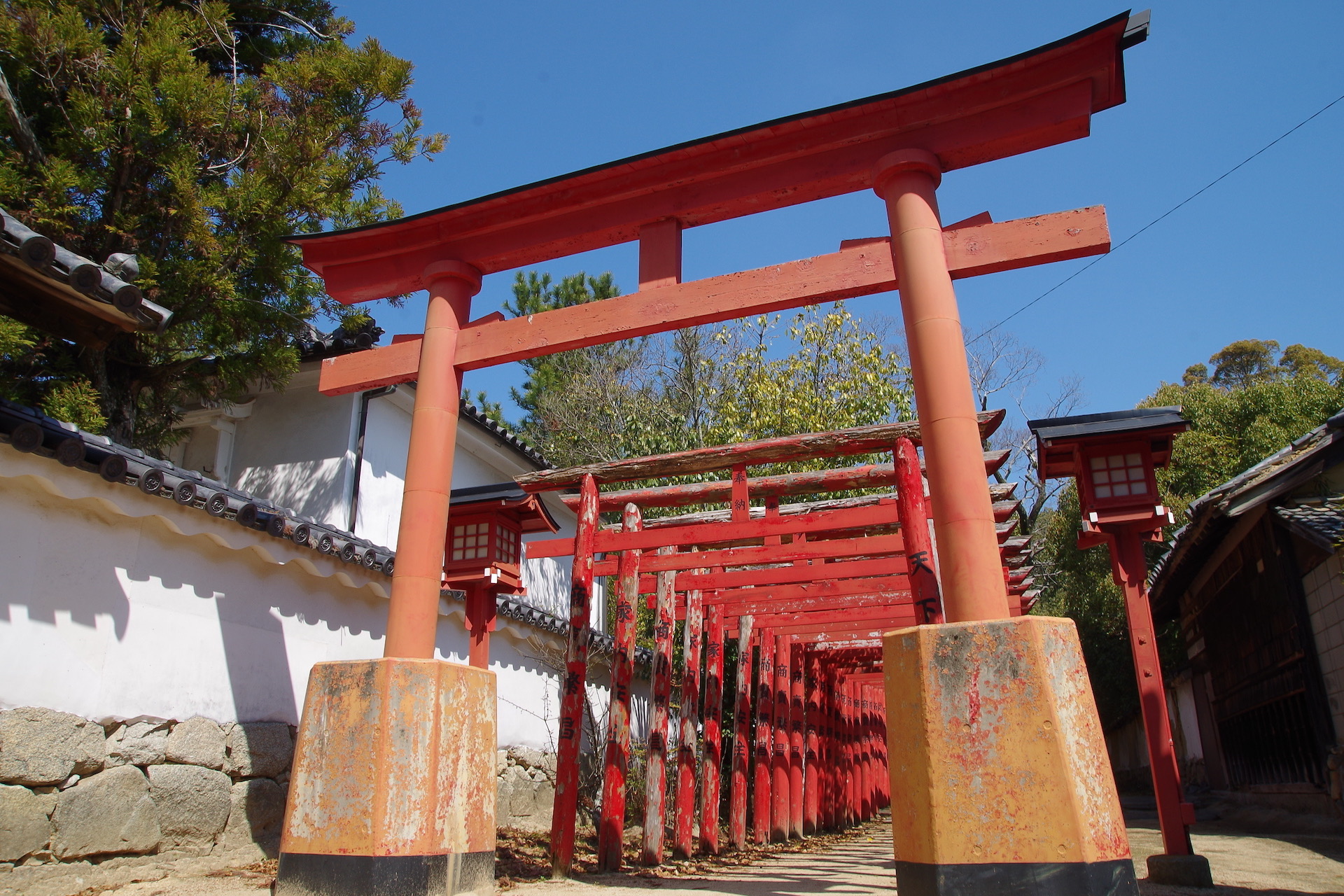 Beside the wooden sacred horse is the Aoyama Inari Shrine. The subsidiary shrine was rebuilt at the same time was the Shirotori Shrine. Long and faded red torii bring some mysterious atmosphere to the shrine. 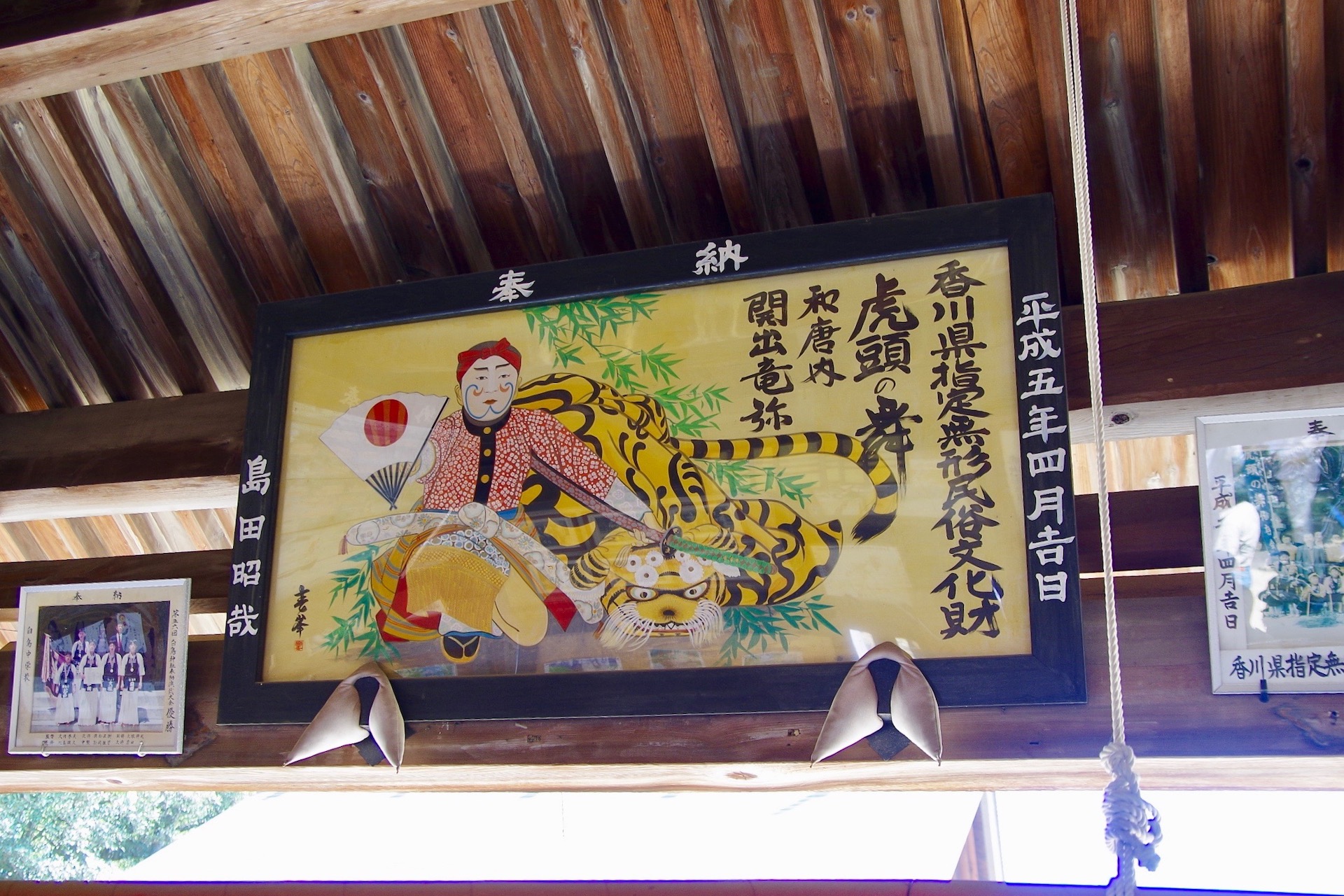 Back to the Shirotori Shrine, in the Ema Hall behind the Worship Hall, you can see a 20-meter arrow hanging on the hall. It is said that the arrow is the biggest contribution to the shrine in Japan. Additionally, there are many paintings, pictures of Danjiri Children Kabuki and other performances. Everything is fulfilled with historic atmosphere and you can imagine the crowd at that time looking at the old pictures.

The shortest mountain in Japan

Once passing through the Ema Hall and archery court, there is the wide pine forest. The shortest mountain Japan is here.

A typhoon in 2005 flooded the Shirotori pine forest. However, a part of the pine forest was safe. According to the investigation, this pine forest is on the mountain with the lowest altitude in Japan, merely 3.6-meter height, named Miyama. In the local history from the Meiji period, there is a record about Miyama. But unless the typhoon happened, people would not discover this mountain which is only one meter far from the Shirotori Shrine. 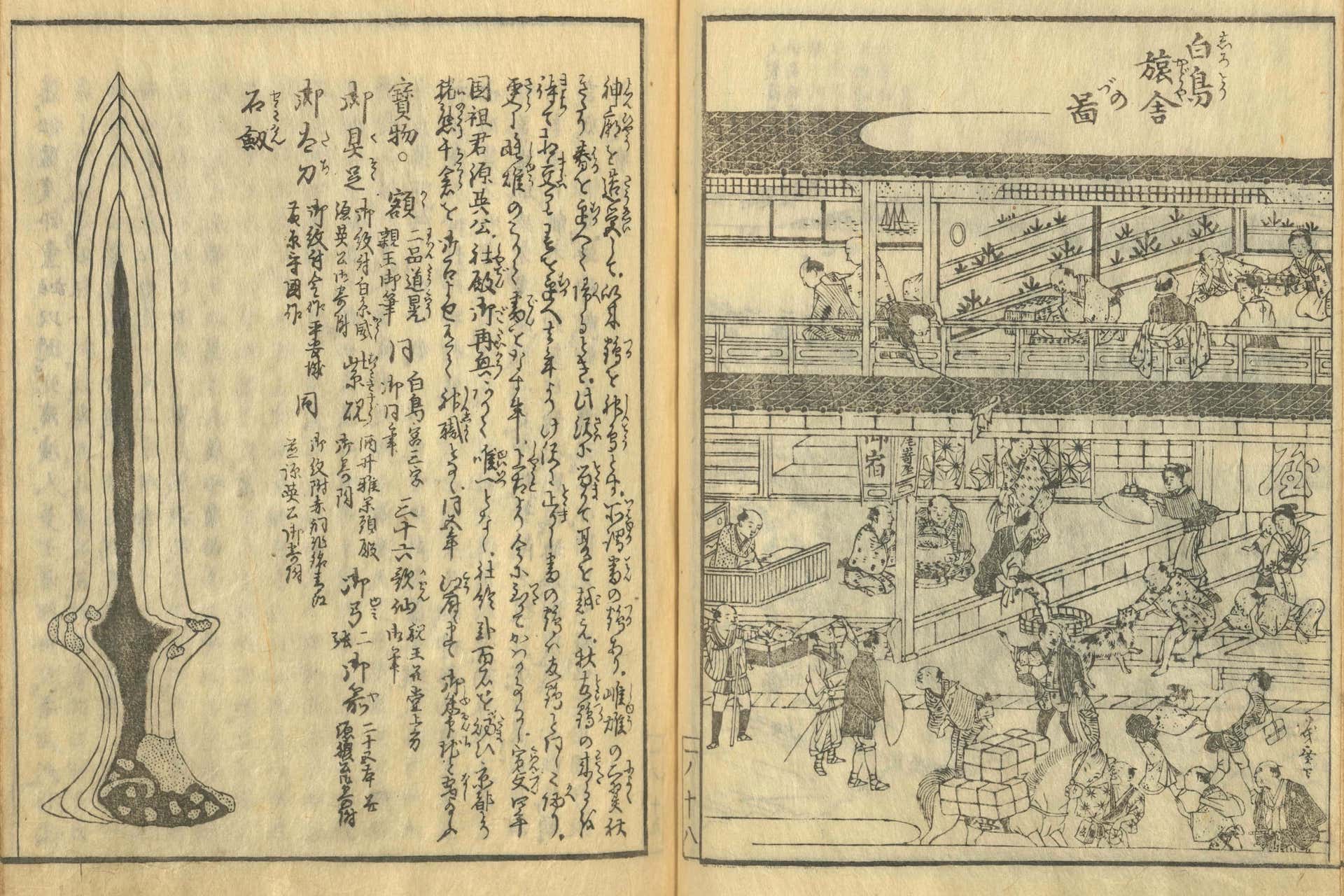 In the past, the Shirotori Shrine obtaining the famous Schuinchi attracted many believers and even developed the area into a Monzen-machi (temple town) that welcomed the travelers and worshipers from everywhere. It is easy to imagine the crowed scene by looking at the painting named “the scenic spot of Sanuki Province”. Although everything changed because of the Agechi-rei, as the Monzen-machi declined the gloves industry started to grow. However this is another story, let’s talk about it later.