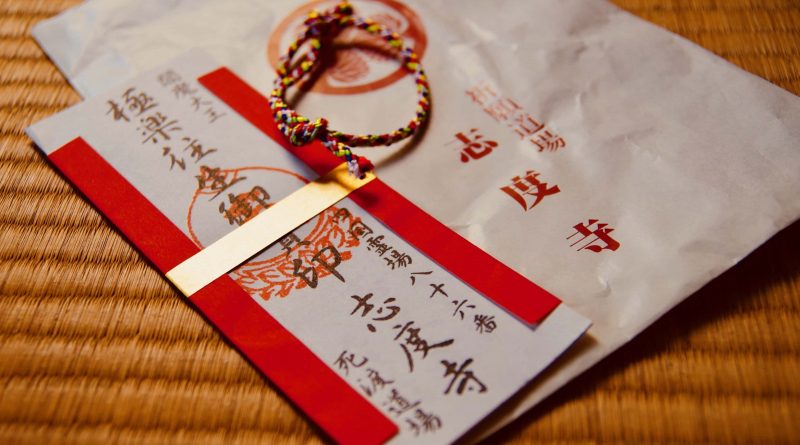 Shido-ji, Nagao-ji and Okubo-ji are the last three temples of the 88 sacred places of Shikoku Pilgrimage: Henro. Starting from the Shido-ji Temple these three last temples are the gate to the route to Kechigan, when one has visited all 88 temples. Located near by the Shido Bay of Seto Inland Sea, there is light sea fragrance when the breeze gently blows.

The original name of Shido-ji (志度寺) was Shido-ji (死度寺). According to the history of the name, Shido changed from “死を渡る” (literally crossing the death) to 死渡 (Shido) then became 志度 (Shido). Same pronunciation with different Chinese characters. It is said that Shido-ji is the closest temple to the Underworld, explaining why the temple halls are dedicated to Yama and Datsue-ba, both symbolic of the Underworld. 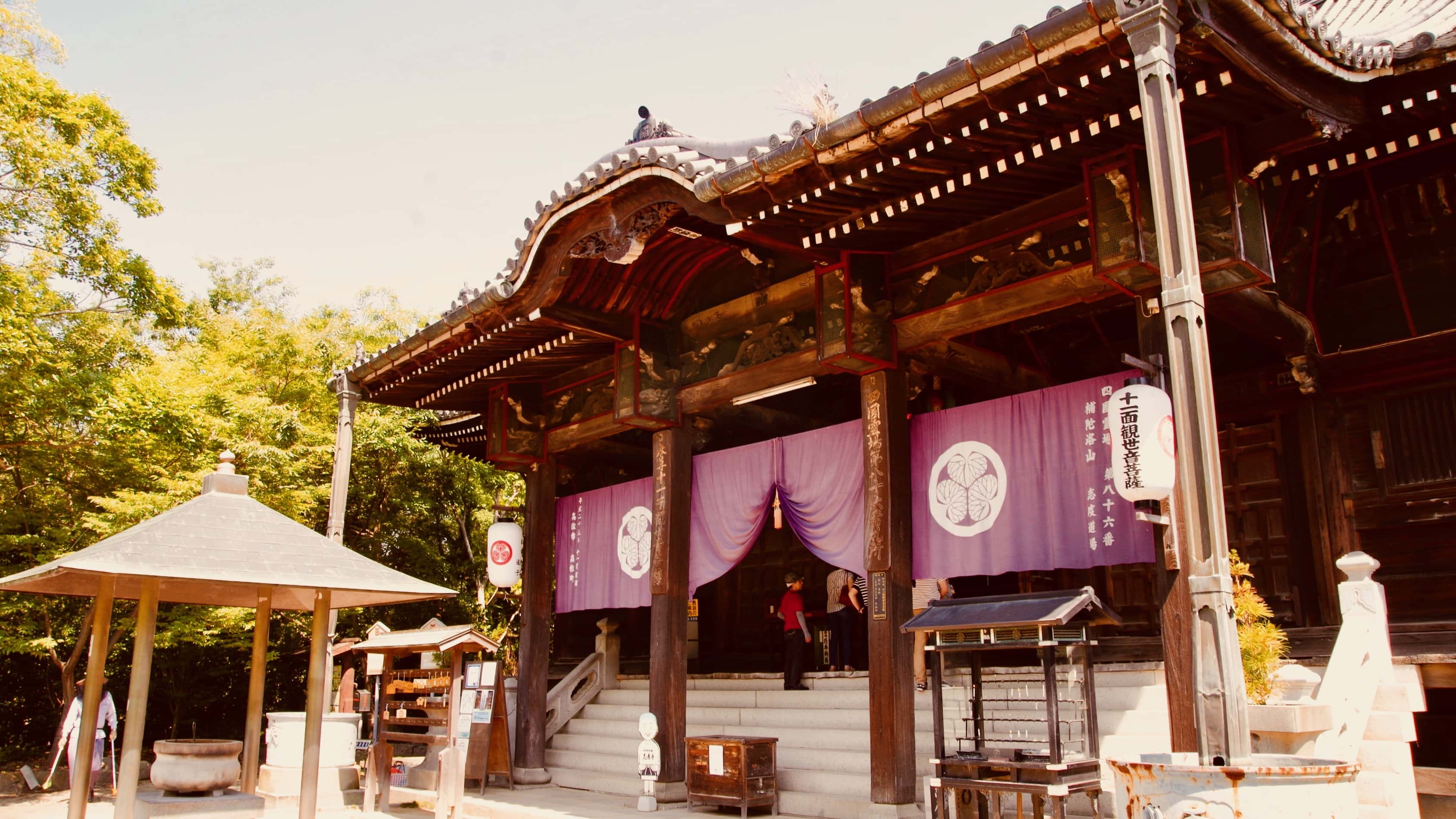 The first name of the temple “死を渡る” meaning “Crossing the death” referred to the Sanzu River in Buddhism which separates the Underworld and the World. Once you cross this river you will benefice a new life in the World. The faith in Guanyin, Goddess of mercy, who gives to her worshipers a helping hand even for those who departs from this world, was always closely related to this myth, This adoration became the basic religion in this area and people come to the main temple of Shido-ji to worship the statue of the eleven-face Guanyin.

The temples dedicated to Yama and Datsue-ba were built in 1671, nowadays both buildings are designated Cultural Property of Kagawa prefecture. 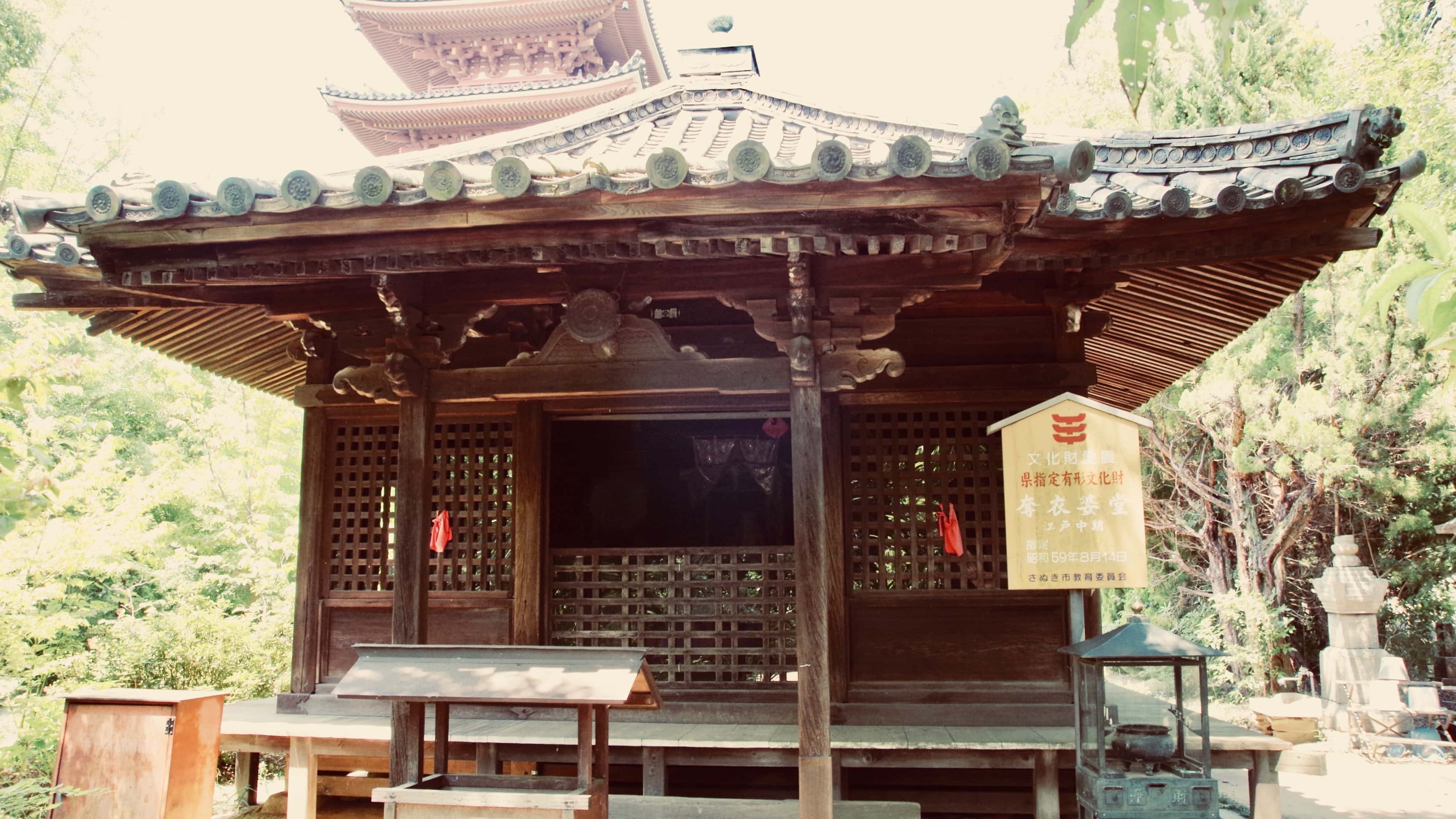 Datsue-ba is an old woman guarding the Sanzu River, the boundary between the World and Underworld. She is a devil who judges if the souls should go to meet Yama in the hell or meet Guanyin in the Pure Land. When souls arrive at Sanzu River, Datsue-ba strips their clothes and hang them from branches that bend reflecting the gravity of the sins. Here fortunes and positions in the World of living, are no more relevant.

Even though people worship Datsue-ba, it is rare to find temple offering a hall like the one in Shido-ji. 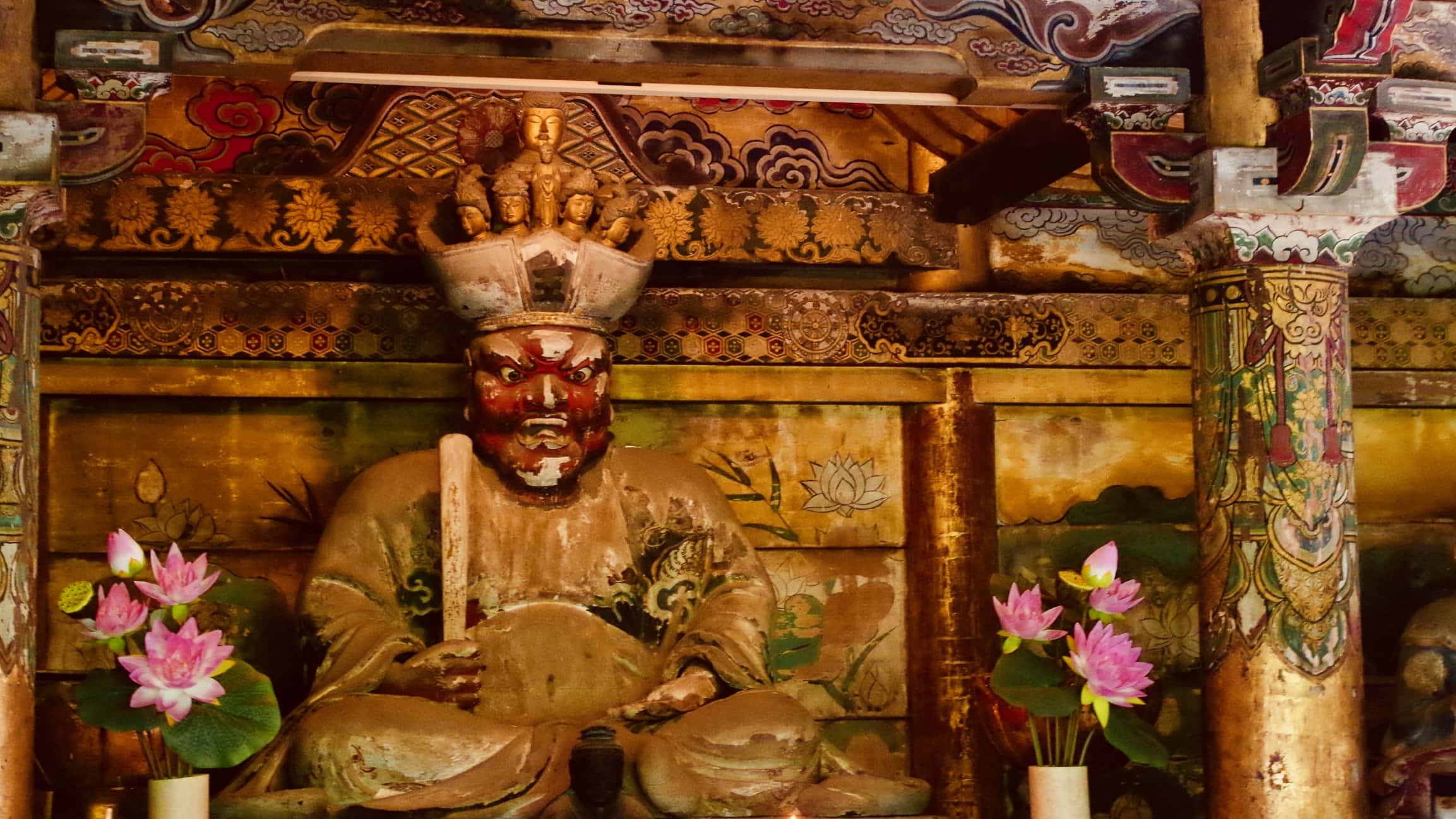 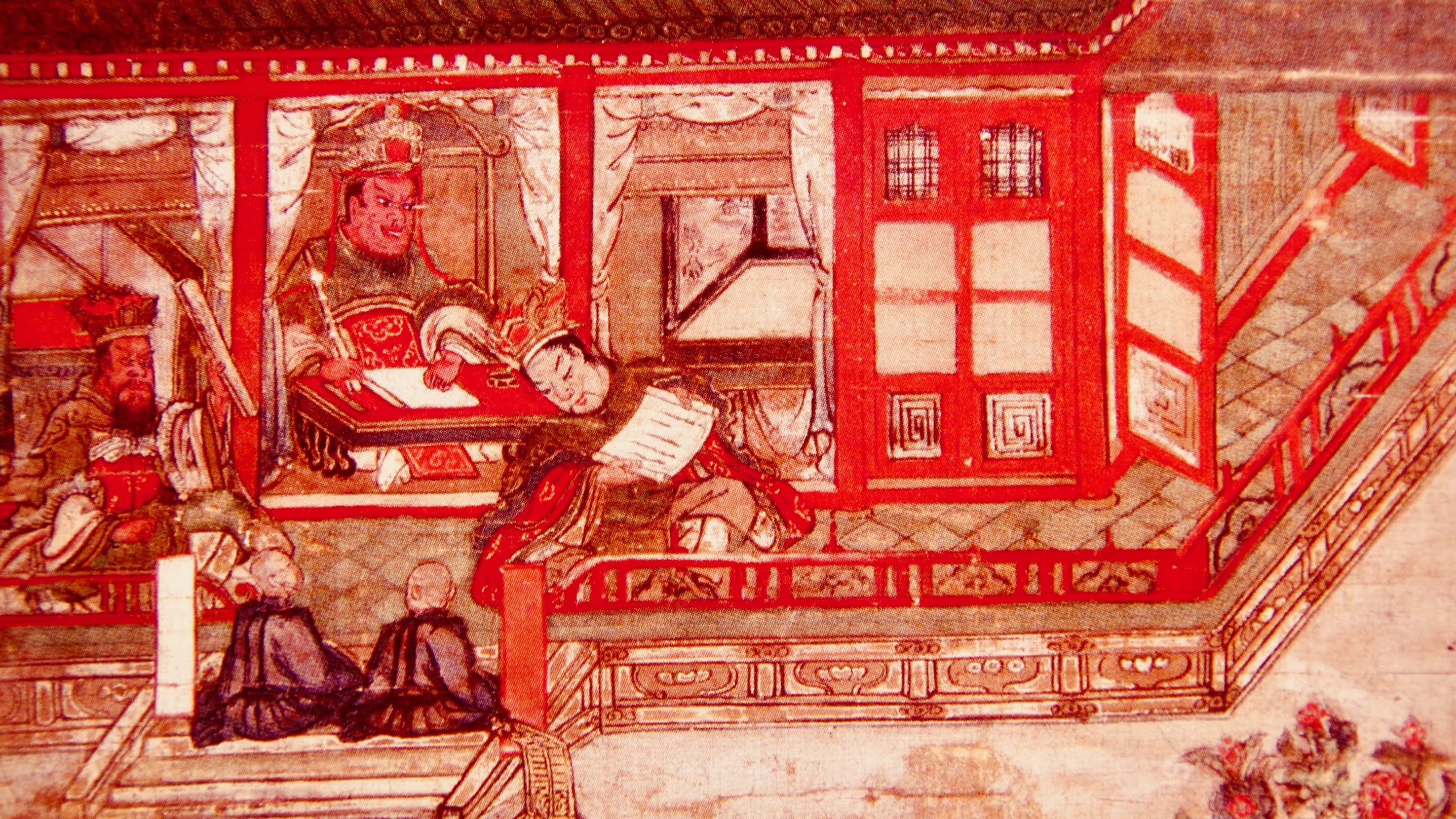 The “Shido-ji Omen”, an important Cultural Property, is a old document recording the origin of Shido-ji Temple. It is composed of seven stories including four related to Yama. In the stories, the hero who died, go to the Underworld, and receive a new life from Yama to come back to the World. To express his gratitude to Yama, the hero built the Shido-ji Temple.

The Yama of Shido-ji Temple looks gentle and warm. The most special thing about this representation of Yama is his crown on which is carved the eleven Guanyin heads, corresponding to the eleven-face Guanyin statue of the main temple, which is a metaphor of rebirth after death. In Japan, it is a rare modelling of the king of the dead. 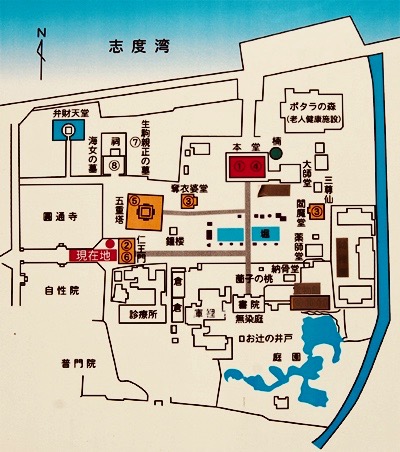 Going straight after passing the Deva gate there is the Academy (Muzenn garden). Here, when turning left to reach the main temple, there is a small moat symbolizing the Sanzu River (the character 堀 on the map). On the north side is Higann (future life) and on the south side is Shigann (this life).

When you visit this temple, first of all, wash your hands at the Chozuya (water-filled basins) in front of the bell tower. Then cross the moat to reach on the west side the temple hall dedicated to Datsue-ba, let her washes all your sins and purify your soul. Next, go to the main temple and the Daishido (hall for the Great Teacher) and offer your prayers to Guanyin and Koubou Daishi. At last, go on the east side to the temple hall of Yama to pray the king of the dead to give you a new life and send you back to the World. 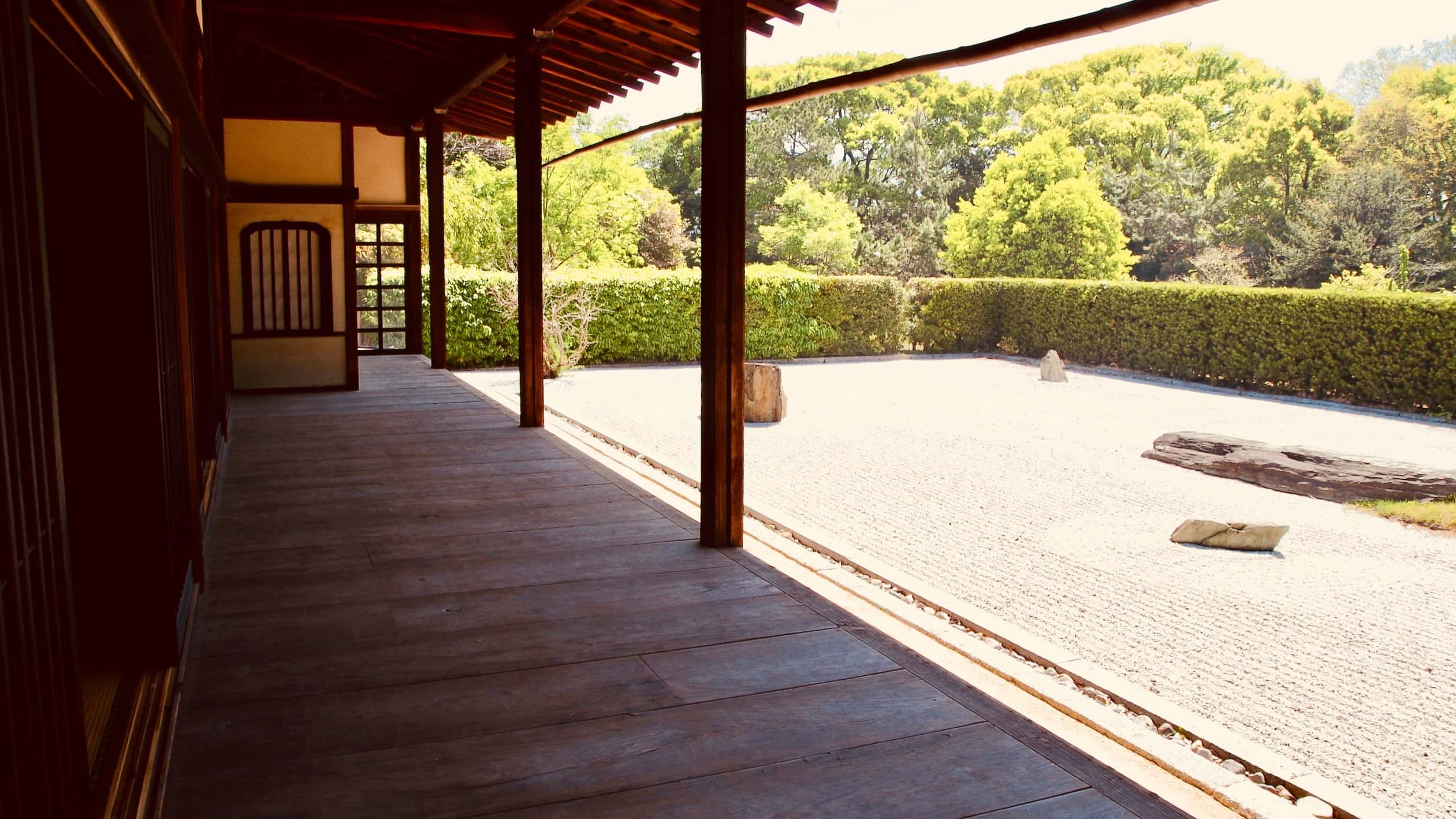 Life is made of ups and downs. When you are feeling low come to the Shido-ji and pray with sincerity. Visit quietly the Muzenn garden, sit, close your eyes and meditate to find peace of mind. If you do so, your trip to Shido will definitely teach you something

SHOPPING THINGS TO DO

The first traces of tea culture in the Kagawa prefecture can be found in the 17th century, when the first lord of Takamatsu Domain, Matsudaira Yorishige, built a tea place in order to hold his tea par

EVENTS THINGS TO DO