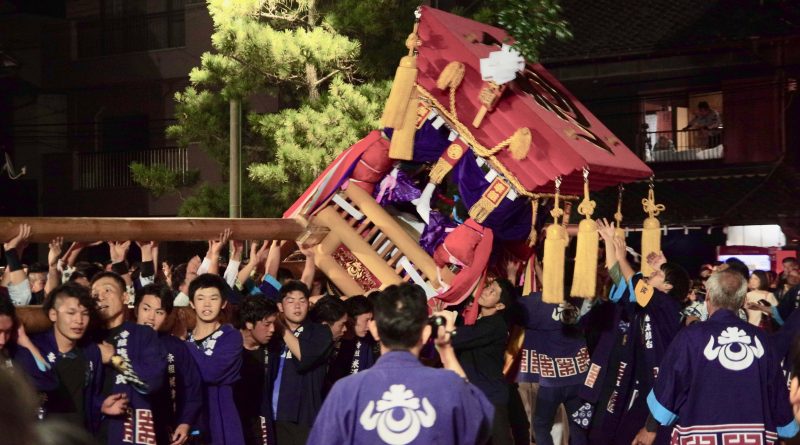 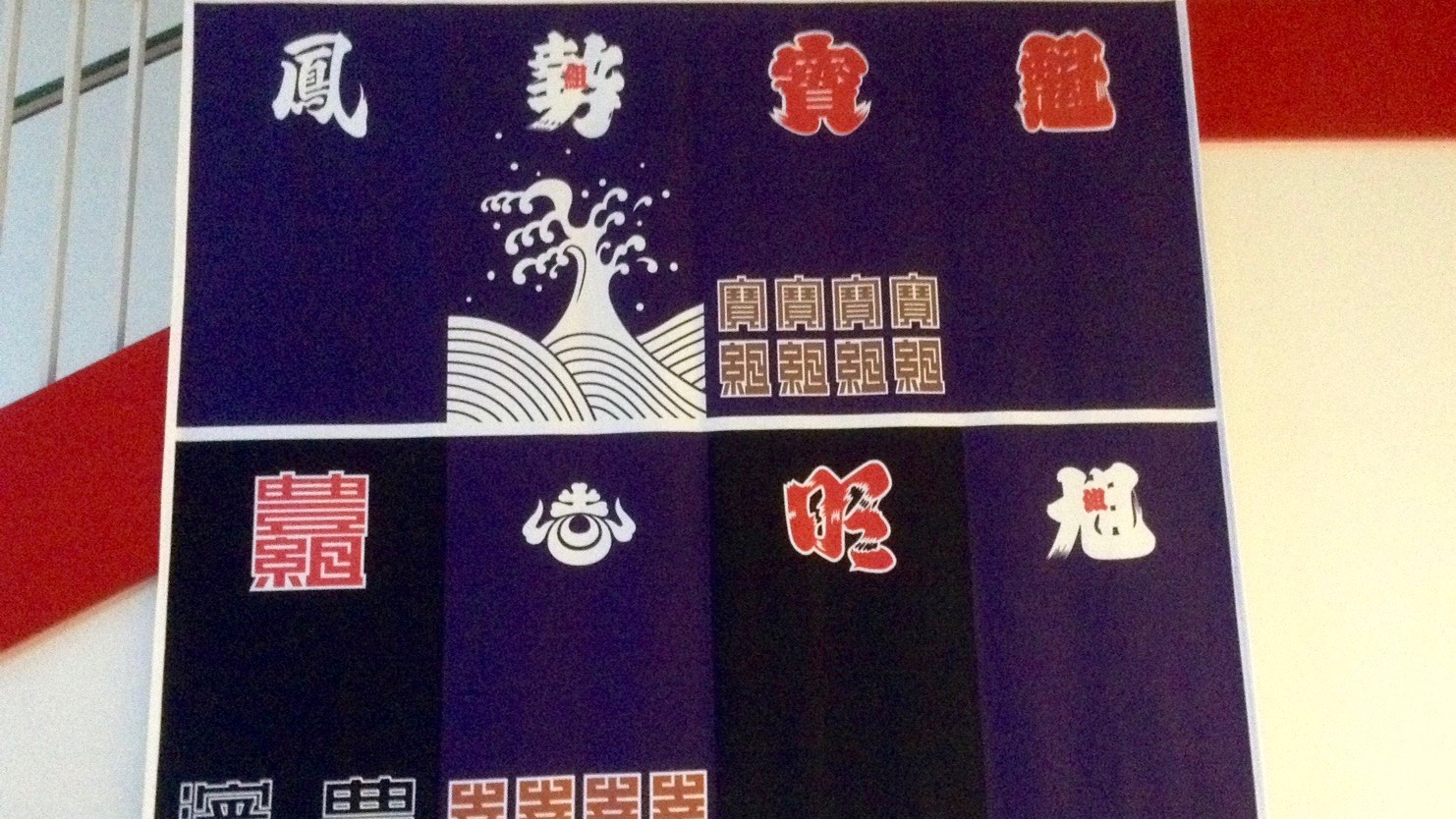 The area of Shido is subdivided into 8 groups. Every year the groups take turn as the “Tou-ya” in charge of the Tawa shrine autumn festival holding the “mikoshi”, sacred palanquin for the Gods, at the front of the parade. On the day of the festival elders and youngers, men and women, almost everyone is wearing the blue happi coat, a traditional straight-sleeved coat, decorated with traditional crest specific for each group, bringing an impressive and calm atmosphere. 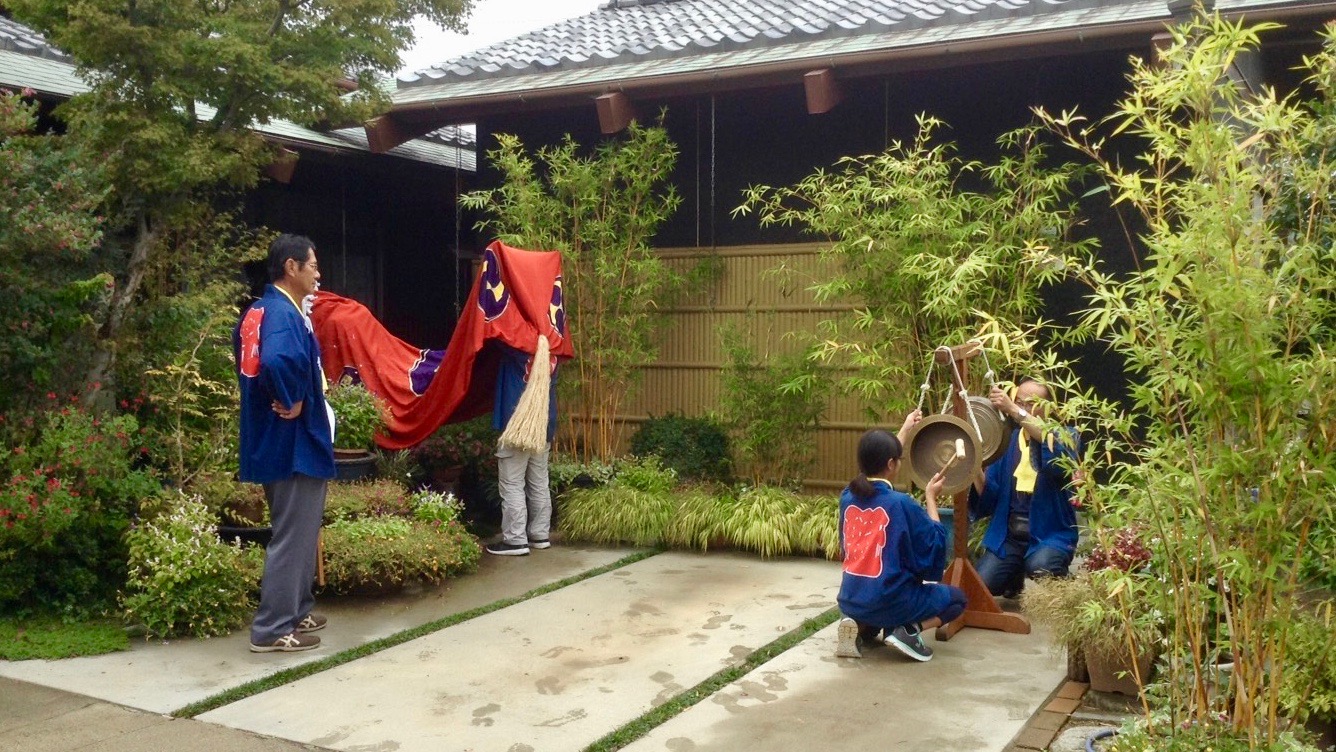 The Tawa shrine autumn festival lasts for 2 days. On the eve of the festival the young men, between 12 to 28 years old,  pull the Taiko floats called “Chousa”. Hitting the taiko and singing the Ise song they parade in the Shido’s streets. Then they finally gather in front of the city hall, the floats carrying the taiko line-up offering a dignified and sacred impression. 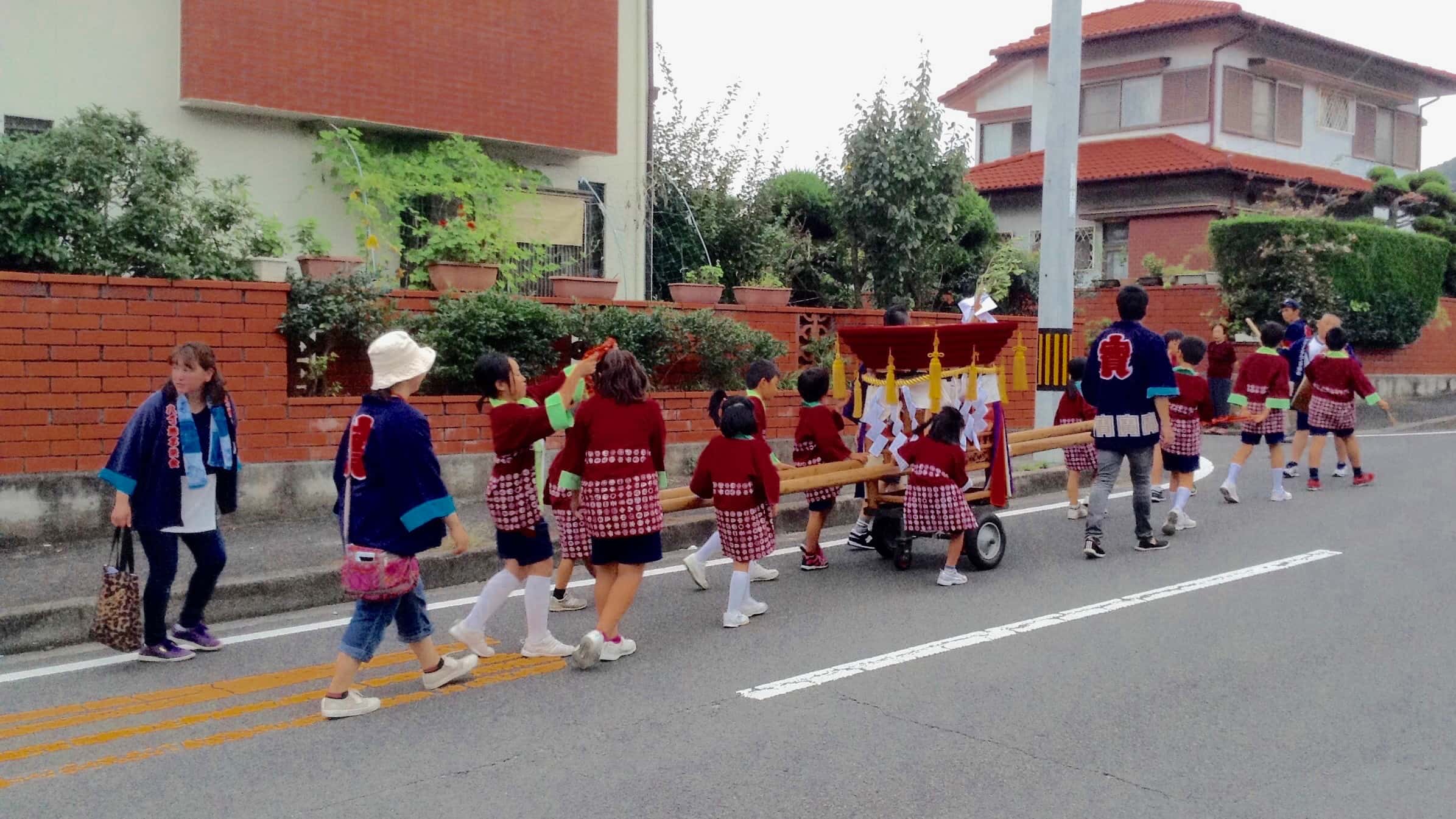 At the same time, the children from each group, knocking taikos, patrol the area pulling a small version of the floats. In addition the traditional “lion dance” visit every houses as a ceremony to prevent from the evil spirits and call the good fortune. The locals believe that children bite by the lion will be protected against evil.

Once the evening comes the lights of the floats roof are displayed. The young men in charge of the floats start to sing the Ise song again while heading slowly to the place where the floats belong. There is crowd of adults waiting for their arrival with children, having the chance to sit on the float and feel the fever of the event is one of the greatest experience for the kids during the festival.

The leading song is a traditional musical composition with a vocal solo and a choir chanting alternatively. The principal lyrics are sung by the vocal solo while the rest of the group is singing in a chorus in between the main parts. This song composition is the typical kind of song that you can hear during festival and traditional singing and dancing events.

The Ise song sung during the Tawa shrine autumn festival is originally from the Ise area (now Mie prefecture). After being transmitted to Shido the songs have been reorganised through the manners and local style of Shido to arrive to its actual form. With the synchronisation of the Ise song and the rhythm of the Taiko the floats parade. As the crowd yell clear and loud “Ora ga chousa” the fever of the festival is gaining everyone. 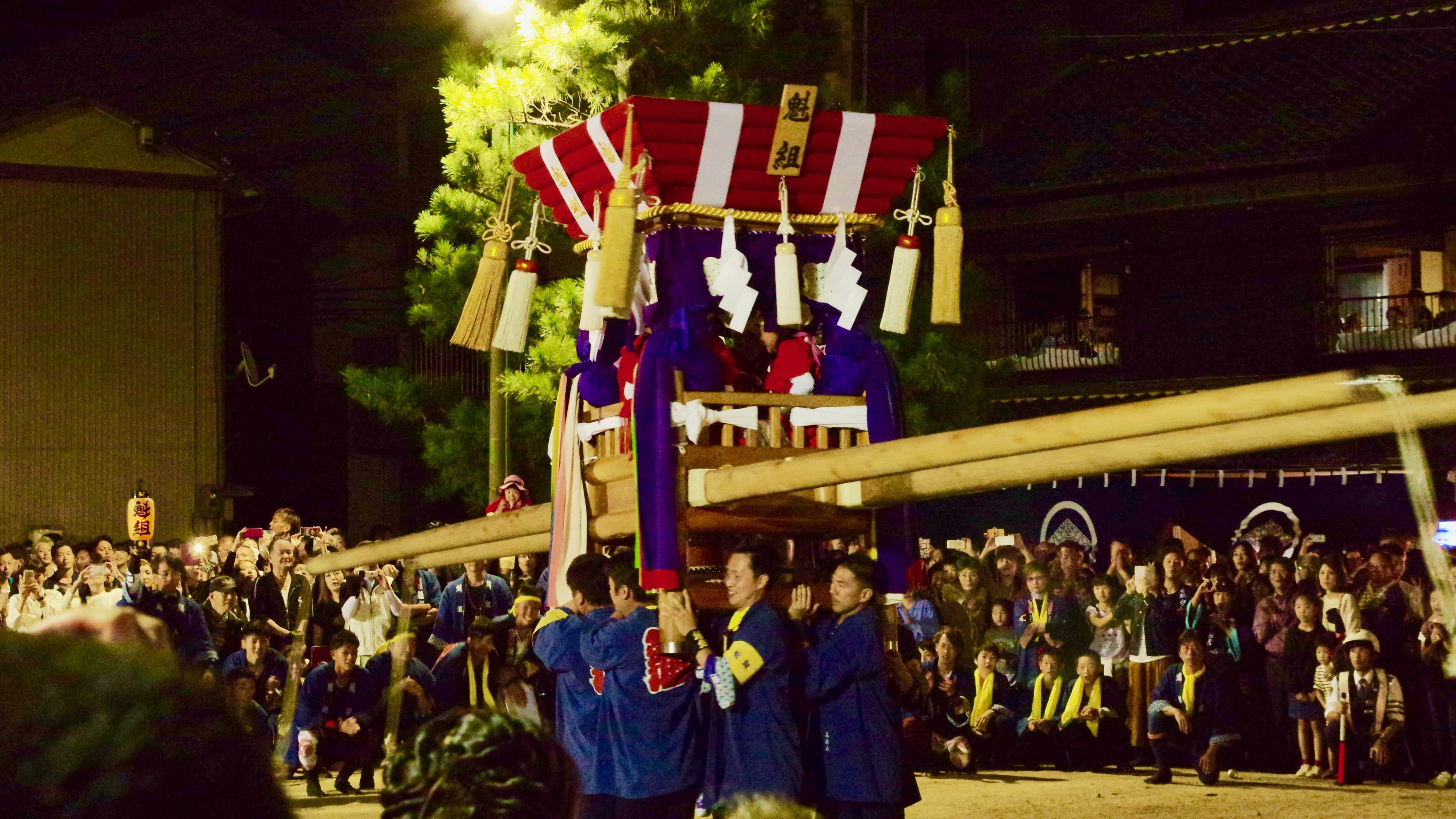 The second day is the main event called “O Miyuki Matsuri”. After the shinto ritual finished in the main building, the Gods are presented to the mikoshi, and will then headed to the “O Tabi-sho” next to the Shido temple. The “O Tabi-sho” is a place where the Gods can rest during the parade, and where the palanquin can be lodge. On this day, men aged 60 years old wearing the traditional white costume leave the Tawa shrine carrying the mikoshi. They descend the mountain, meet with the floats and continue the procession in direction of the “O Tabi-sho”. Once all the floats reach the public place they line up and the carriers rotate the floats from one side to another one.

The particularity of Tawa shrine autumn festival is the participation of children as the leading actors of the event. On the eve of the festival not only adults are joining even small children are parading with the small floats. Commonly only massive floats carrying taikos and adult taiko players are seen during festivals. However, during this festival it is children who are sitting inside the “Chousa”, the floats carrying the taiko. The whole Shido area is filled up with the excitation spread by the festival. The most lively part of the event is the “Neri Honnou”, the parade dedicated to the gods. The main float weights 800kg and is 12m long, 8 young men hold it the higher they can while describing circle to show the “Chousa” to everyone as an offering to the gods. In one hand watching them waving the massive floats in the air is empowering, but in on the other hand your hearth is racing in fear for the children sitting inside playing the taiko. The event is reach its peak of excitement. 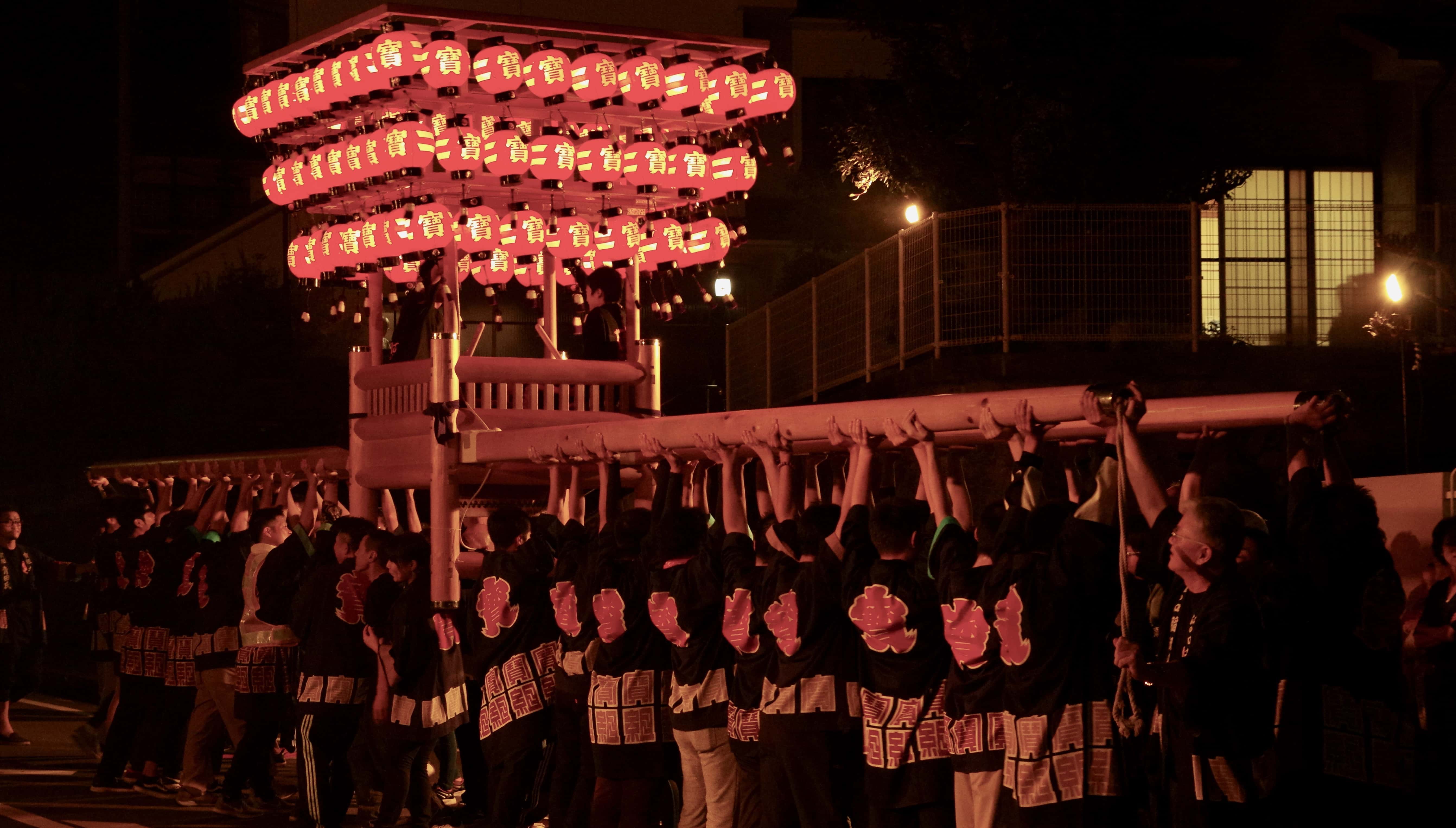 For the return the men of the unlucky year, turning 42 year old during the year, will then conduct the mikoshi to the Tawa shrine. The young men from each group take off the roof of the floats and set the lanterns changing their floats into “lantern floats”, before following the mikoshi. Please do not rush to go back home now or you will miss the best of the festival, called “Kakikurabe”.

About 21:00 the mikoshi and floats are passing between the stations Kotoden Shido and JR Shido. The twinkling mikoshi and the 8 red lighted-up floats are then lined up. Surrounding them there is thousand of men covering the whole space in the street. Everyone is singing loudly the Ise song filling the atmosphere. There is no doubt that the festival is reaching its climax. 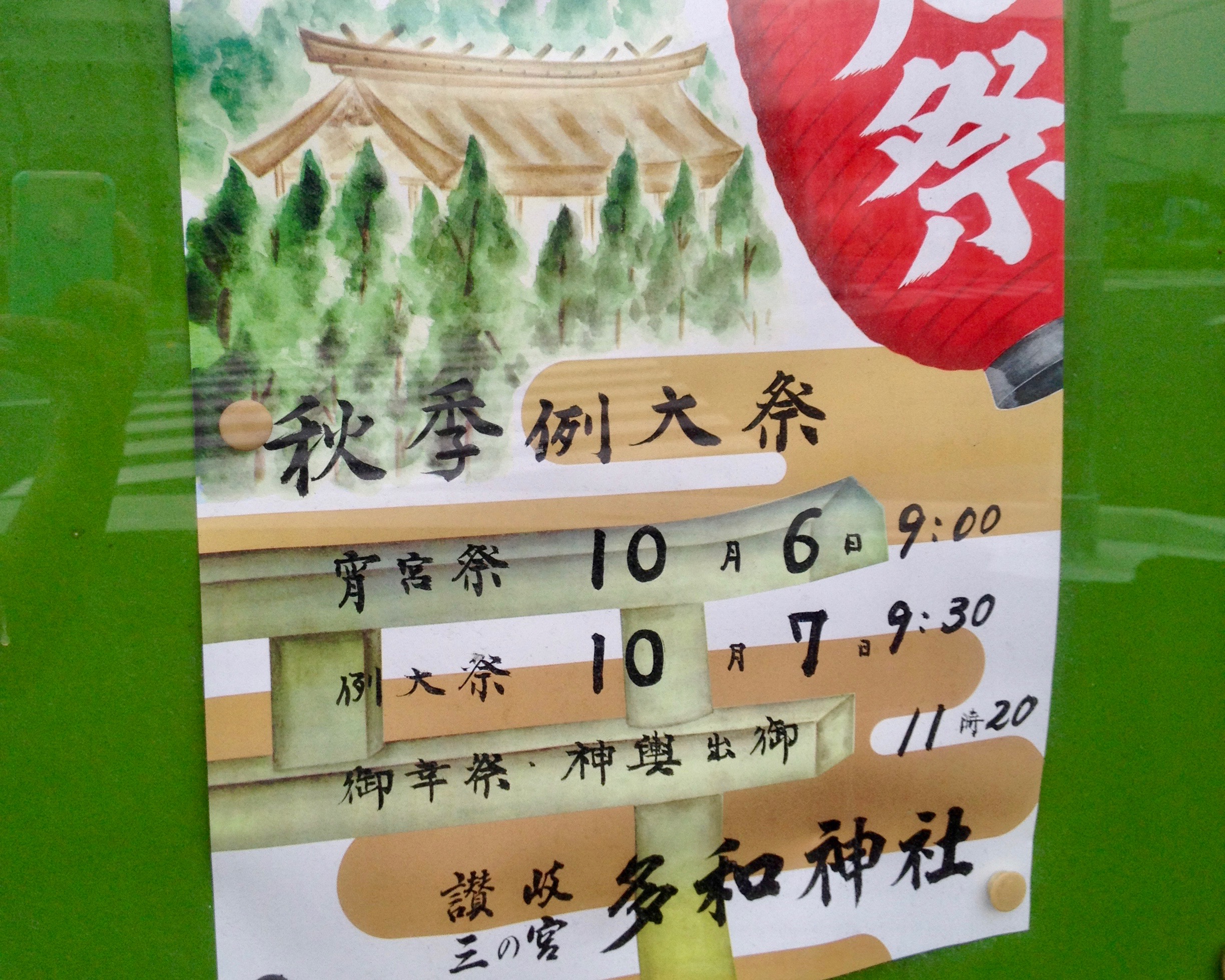 After resonating for 2 full days, the sounds of the Ise song and taiko will gently disappear, and Shido will be back to its peaceful and calm days. Through your journey if you get the opportunity to experience this traditional event we are sure that you will love it.