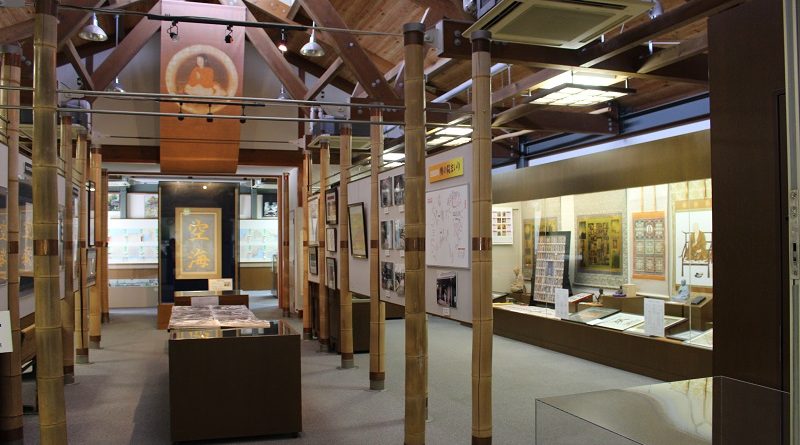 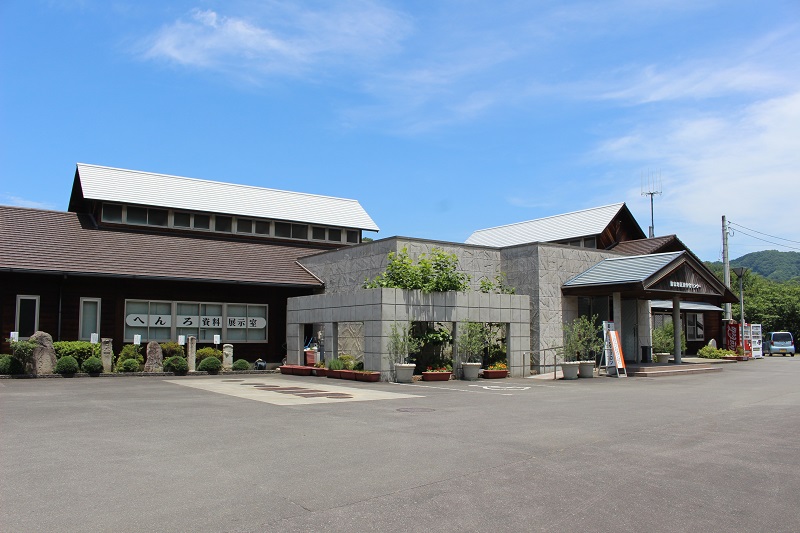 This centre is located 11 km before Okuboji, the final temple of the Henro pilgrimage.

In the “Henro exhibision room” you can see travel books written in the Edo era, ancient maps, name slips by pilgrims and so on. There is also space “the exchange salon” for interaction between pilgrims. This centre opened 17 years ago. In more recent years more and more people visit from not only distant places such as Tokyo and Osaka but overseas. 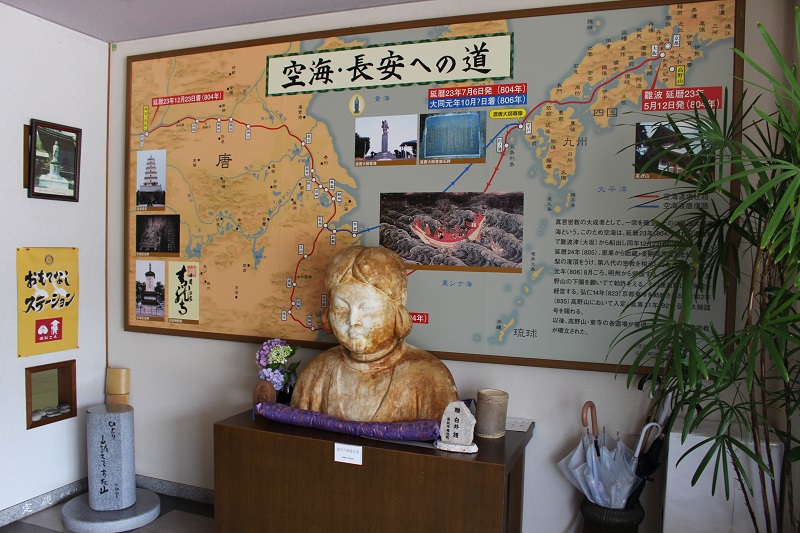 There is a map of Kukai’s stay in China on the immediate right through the entrance. Kukai was dispatched to China as a Japanese envoy and studied there for 2 years. Keika initiated him into all the Esoteric Buddhism for three months. He brought the teachings back to Japan and established the Shingon Esoteric Buddhism. The map reveals the traces of his stay in China. 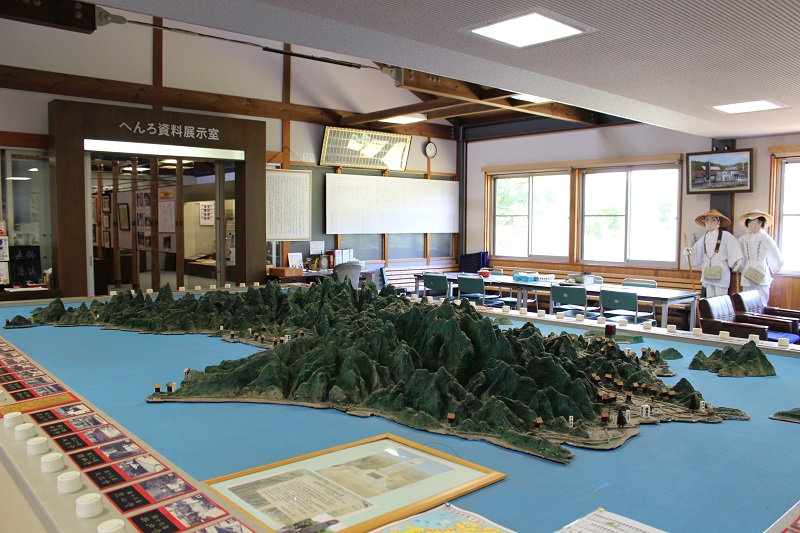 The exchange salon contains a diorama of Shikoku with the 88 temples marked in red illumination helps pilgrims find the location of the temples. 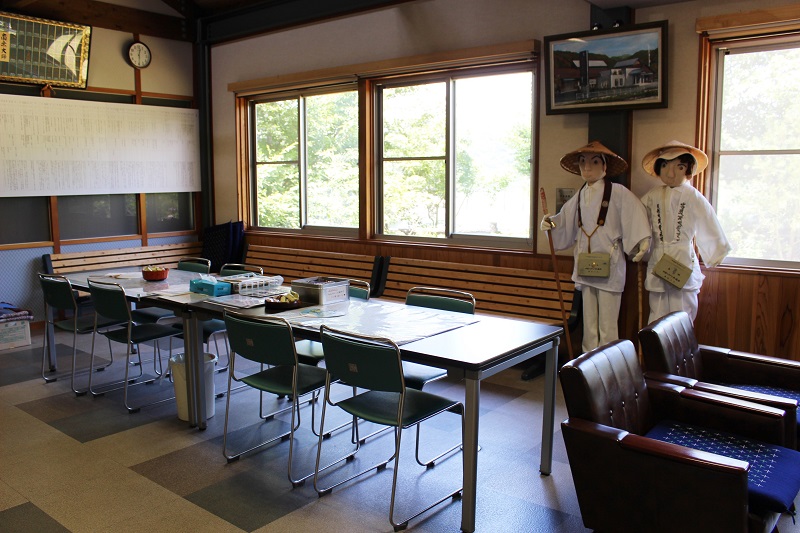 At the end of the room tea, snacks and quiet place are offered to pilgrims. 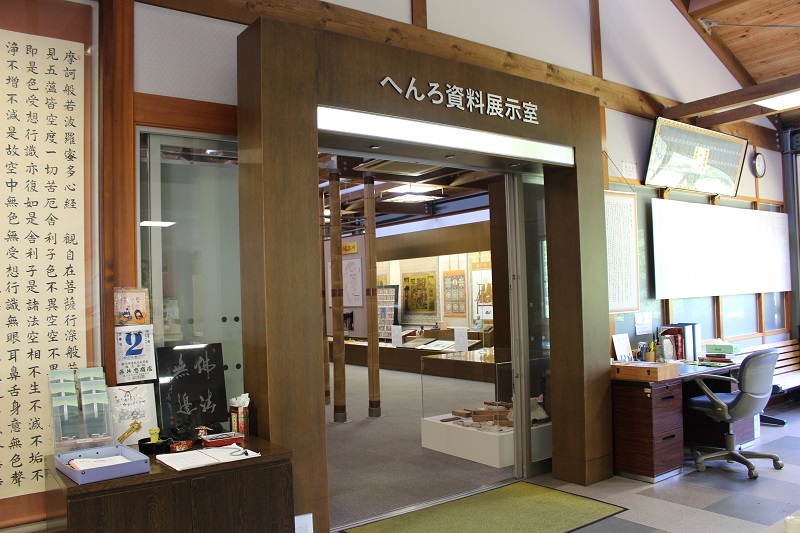 On the left side of the entrance to the Henro exhibition room a commemorative rubber stamp for visitors is available. 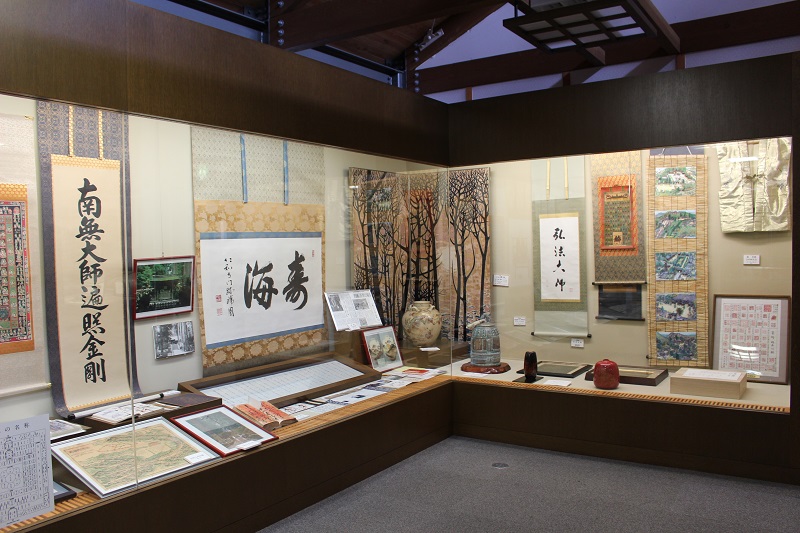 There is a number of historical materials like hand-copied sutras with liquid sumi ink, vermilion stamps and travel permits in the room. 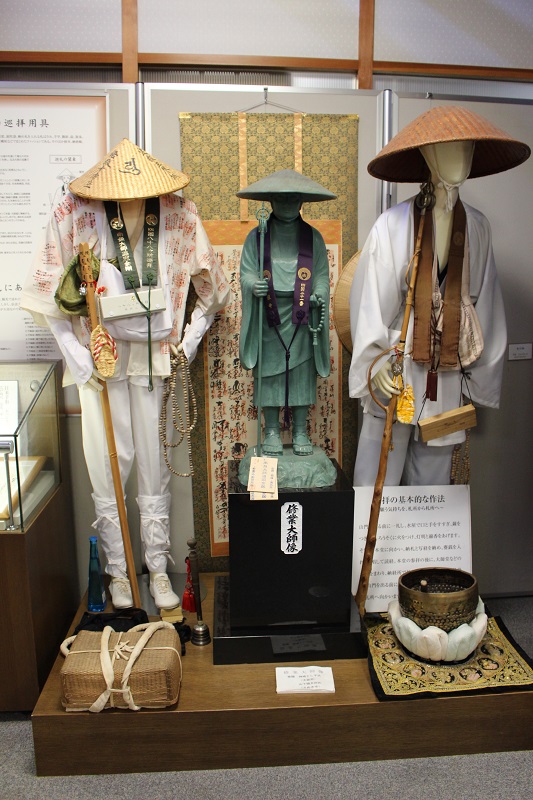 Each house along pilgrimage road in Shikoku receives Osame-fuda in return when they treat pilgrims to tea and food which is called “settai” or give places to spend a night of good will which is called “zenkonyado”.  Offering “Settai” is a kind of player asking pilgrims to send their misfortune away as well as aiming to help the Pilgrim journey. Legend has it that someone could worship on behalf of another and that “other” absent person could receive divine grace. The straw bag was used to put in osame-fuda and gofu(paper charm) which was tied up on the beam of a house and tended with great care. 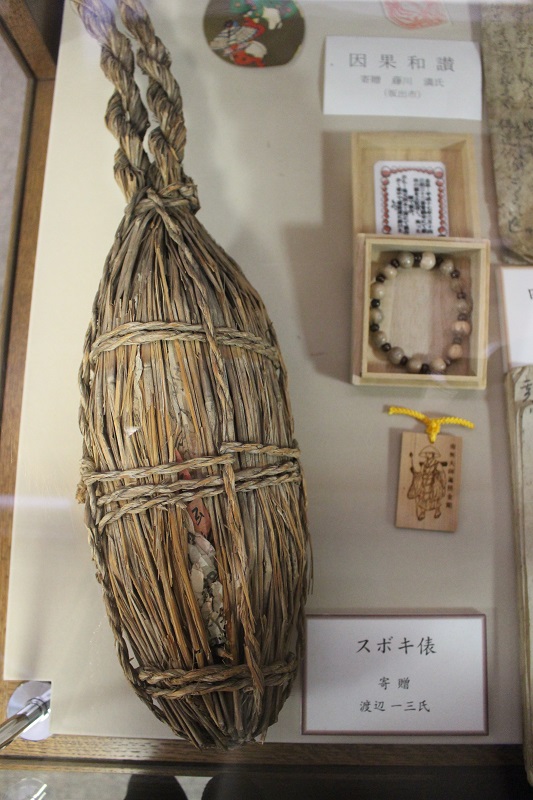 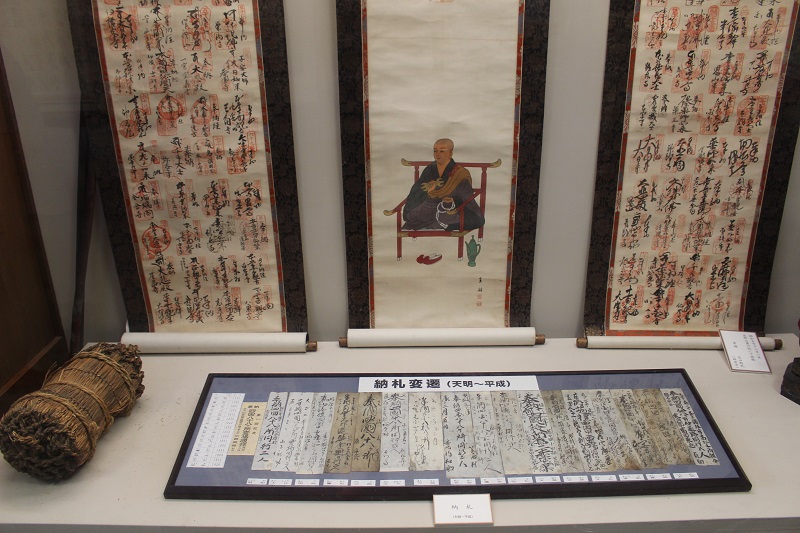 This straw bag contains osame-fudas from the Tenmei era to the Heisei era contentiously inside and this is the only one found. So both the straw bag and the osame-fuda are historically very important. 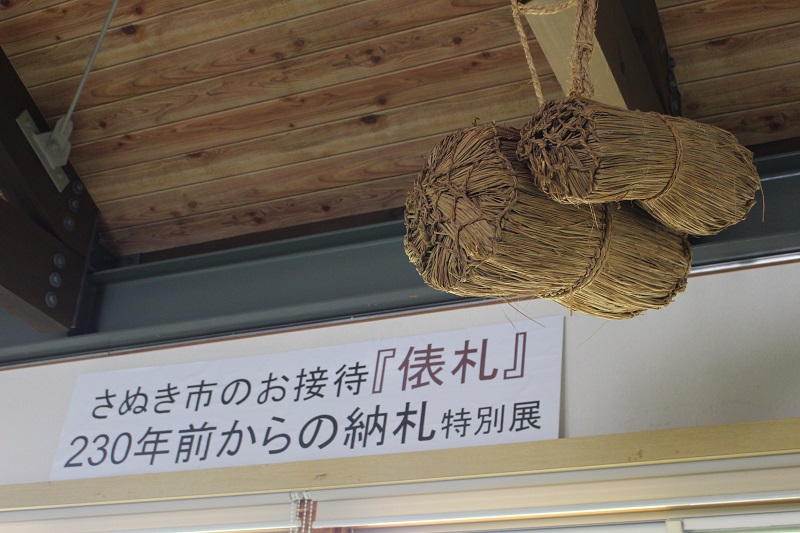 At the very end of the exhibition, the osame-fudas from each three families, the Sangawas, the Iidas and the Tabuchis, are displayed in special exhibition until the autumn of 2016.

Being offered a straw bag containing slips from Iida family as a start, the research began by the Ohenro tsukasa association seriously in 2013. The Iida’s contains osame-fudas from the Edo era. The research was proceeded in the other families. 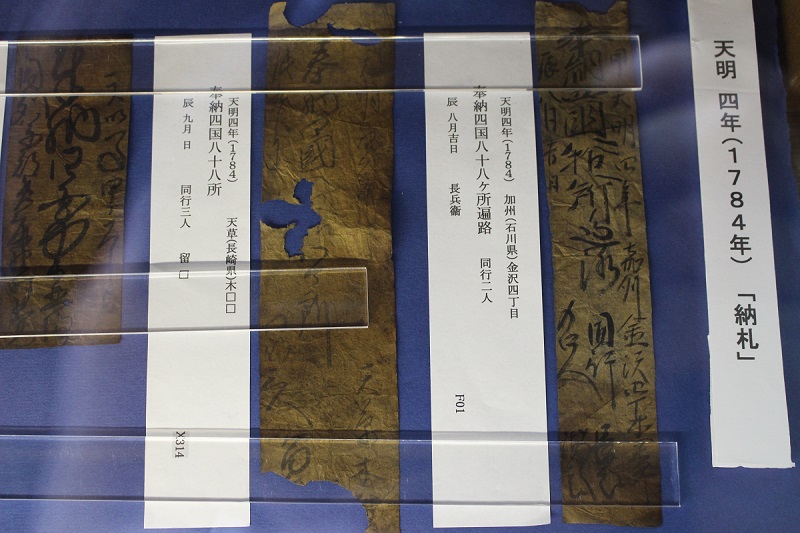 The oldest osame-fuda discovered is from the Tenmei era. Most of osame-fuda from 200 to 300 years ago were written with Fude, writing brush, which changed the style to printing about 100 years ago. On the slip the following words appear. “Hōnō-kyō, Honzon xx Nyorai”. And own desire such as safety of homeland, comfort over two generations and satisfaction to wish. Nowadays fulfillment of desire, good luck, longevity and achievement of study are written on the other side of the slip. 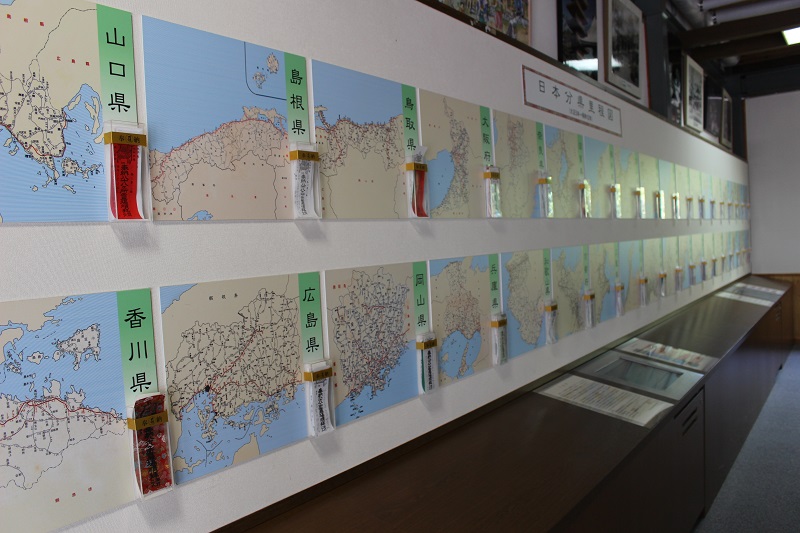 Henro pilgrims substitute an osame-fuda for a business card. The color of osame-fuda changes depending on the number of times one has done the Henro pilgrimage. From 1 to 4, the slip is white. From 5 to 7, it is green. From 8 to 24, it is red. From 25 to 49, it is silver. From 50 to 99, it is gold. Beyond 100 times, one uses a brocade slip called nishiki. 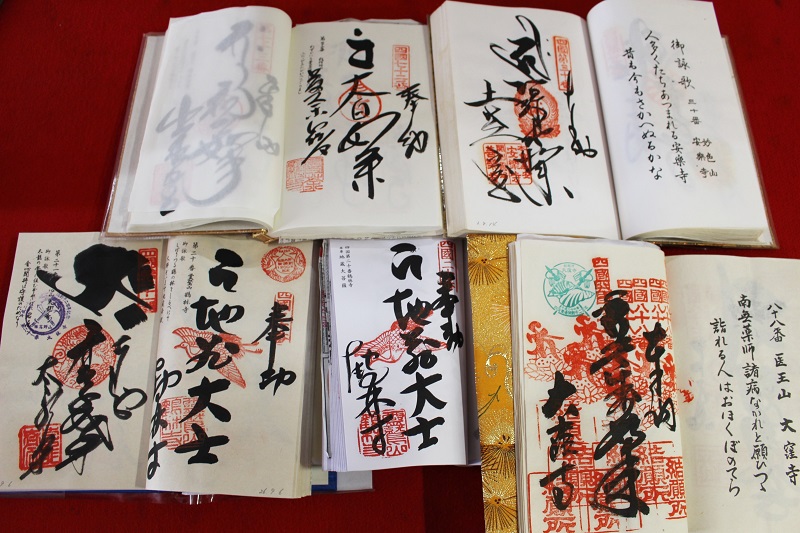 One of the visitors at the centre gave me his red osame-fuda which was the equivalent of his business card. He showed me his pilgrimage stamp books (nōkyō-chō). It filled with stamps from all 88 temples. If anything, each of his books was an artwork.

The Kagawa Henro study group conducts actual Henro road walking and presents their studies. All you need to join the group is to contact them in advance.

Many people visit this centre to get rest and see historical materials of Henro. The number of the visitor reached over 180 thousand by the end of last March.

The director and the chief of the centre welcome visitors warmly and tell them the explanation of the materials in detail. If you want to know more about Henro pilgrimage, you must visit this centre.