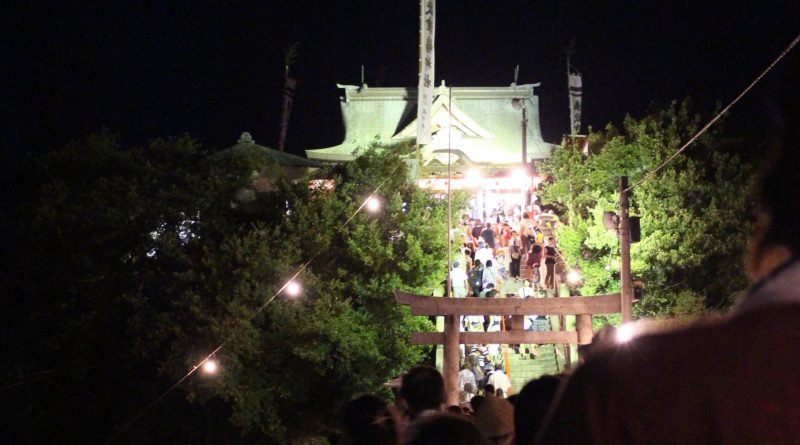 Tsushima Shrine which is well known in Japan as a guardian angel for children’s health and growth is enshrined in Tsushima island located in Takuma-cho, Mitoyo city for more than 400 years (since 1593). Tsushima island is small island (with a circumference of about 132meters), floating about 250meters away from the main land. Only during the festival days (Aug 4th and 5th), there will be a bridge opened from Tsushima shrine to Kaiganji located on the opposite shore and about 50,000 people visit the shrine during those two special days every year.

The origin of Tsushima shrine goes back to Bunroku Era (1592 – 1596). The villagers heard a voice of a woman singing on the seashore during the summer season but found no one there. After that, they received a divination from the shrine maiden saying,  “ I am the god living inside the ocean. It’s name is Tsushima-Shin. It will enshrine this island from now on. You do not need to build a shrine there, just plant a tree and it will be the SHINTAI (object of worship believed to contain the spirit of a deity, typically housed in a shrine). If you do that, I will protect the children of the village, horses and cattles from sickness and misfortune.”

Villagers did as the divination said and placed a TORII (a gateway to a Shinto shrine) at the island and started having the festival on June 24th and 25th on the old Japanese calendar every year and that become the start of the Tsushima Shrine Summer Festival.  The festival was moved to Aug 4th and 5th after 1970 to match up the children’s summer vacation.

This year, the visiting hours for the shrine were from 6:00AM to 10:00PM on the 4th and 5th. There was fireworks, so I have visited the Tsushima shrine on Aug 4th.

Train station known for the shortest opening days in Japan 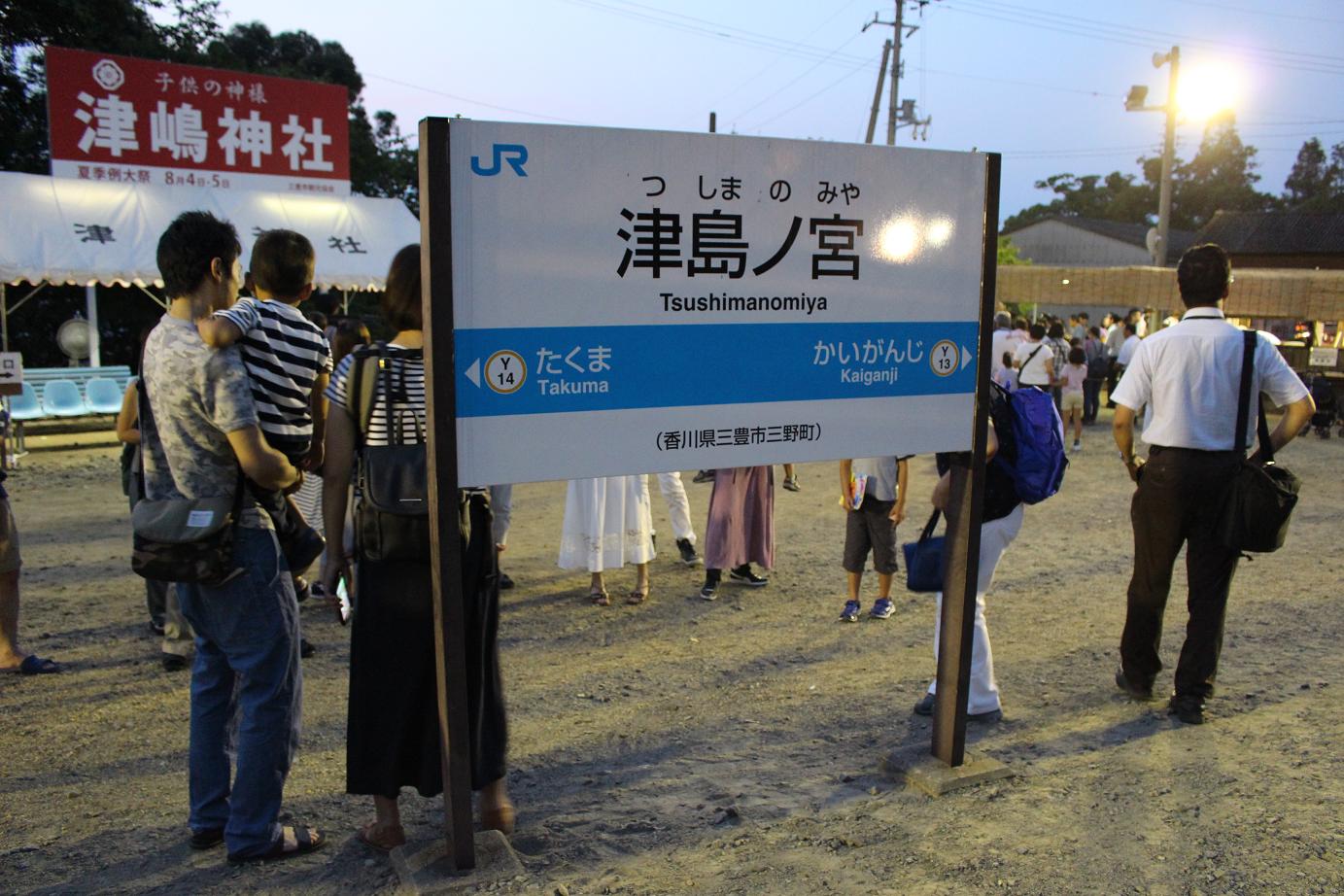 The Tsushimanomiya station is in operation on August 4 and 5 every year. They have received the approval of opening the temporary train station since 1915 and the station is known for having the shortest opening days in Japan. 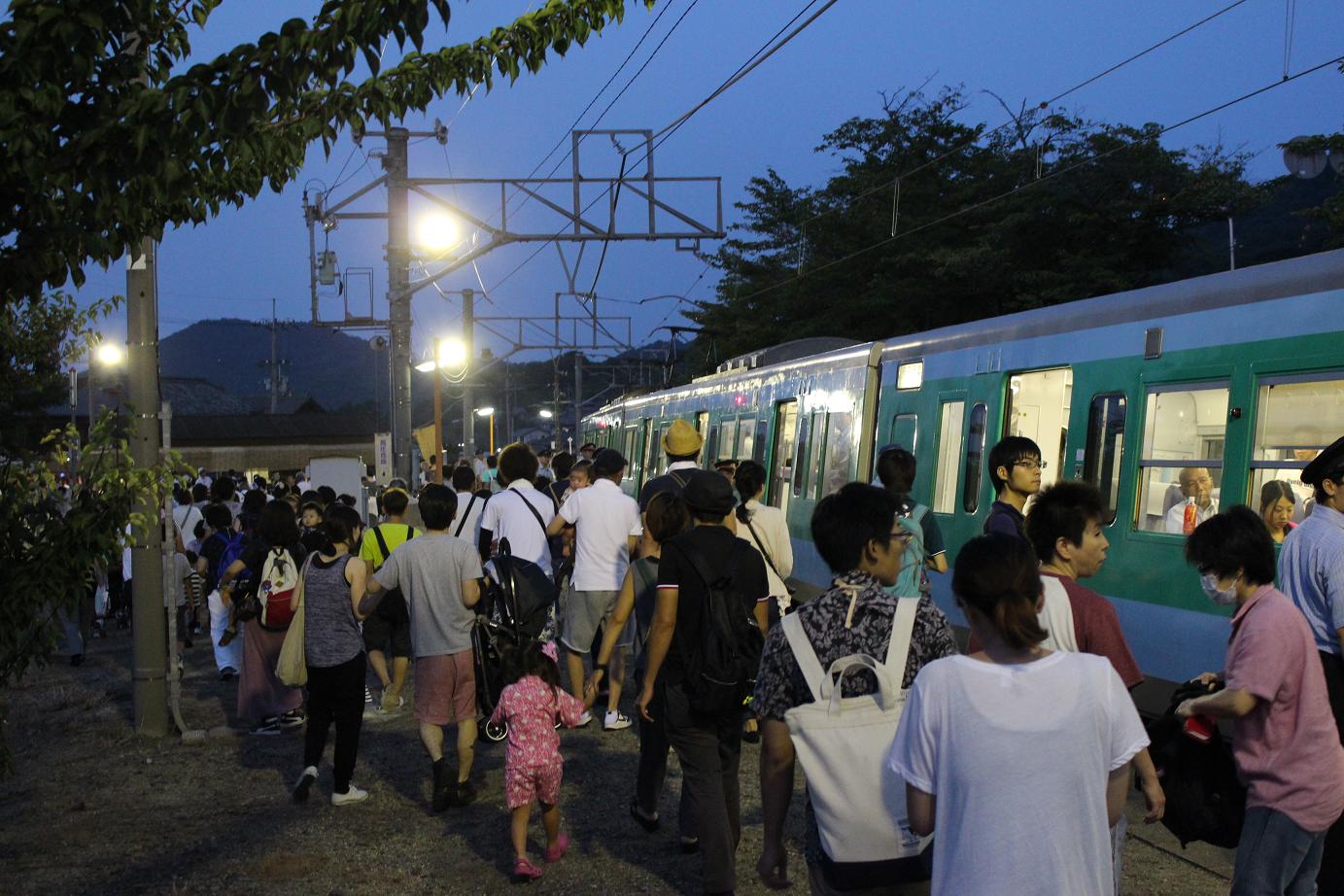 Trains are scheduled to stop 21 times at Tsushimanomiya station on 4th and 5 times at 5th. It is possible to drive to the festival but consider walking 2 to 3 kilometer with a crowd of people from the parking area. I recommend you to take trains instead. 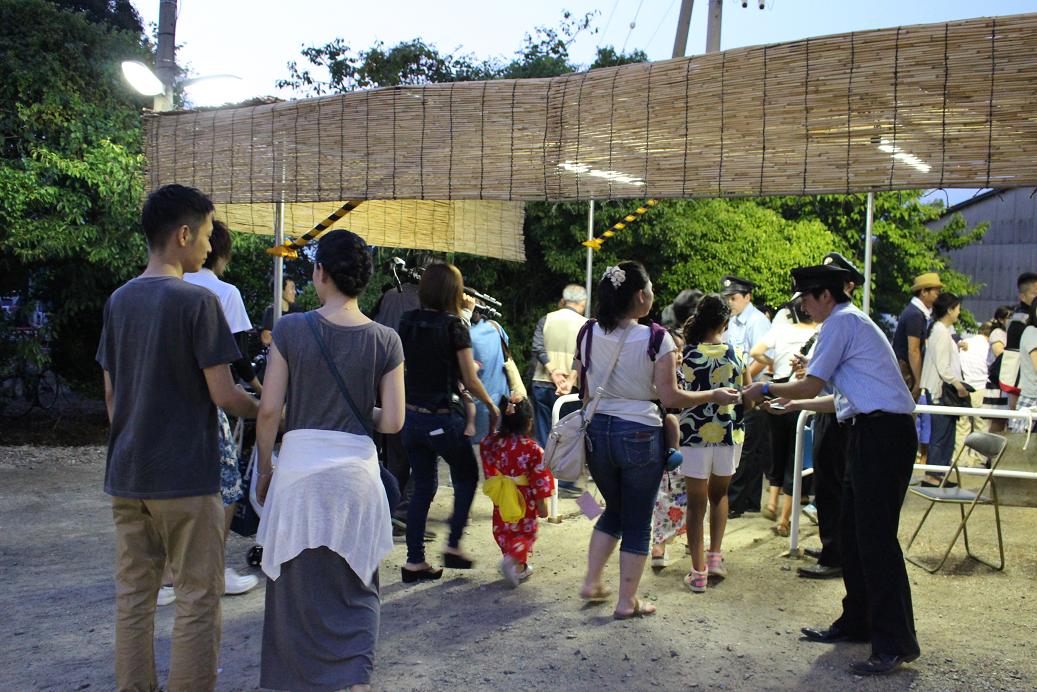 There were tons of people during the festival so the numbers of railroad staff were increased to prepare thoroughly for whatever might happen. 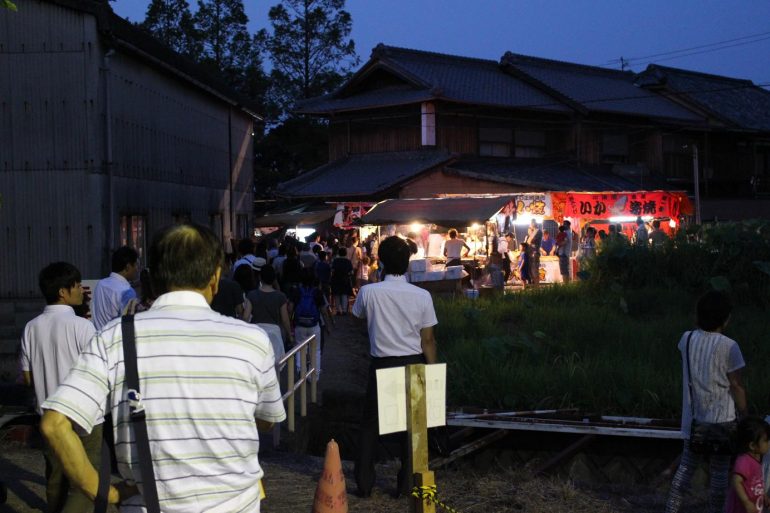 From the time you leave the gate of the station, all you can see is people. 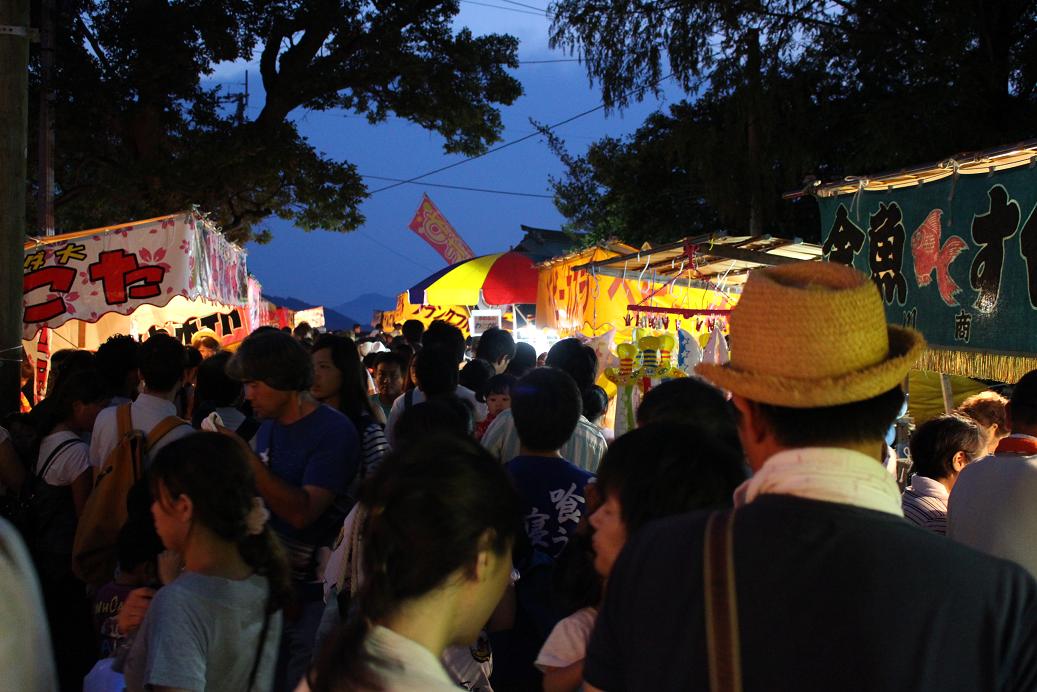 There were a lot of food stands and scent of the sweetness and fragrance are floating around. 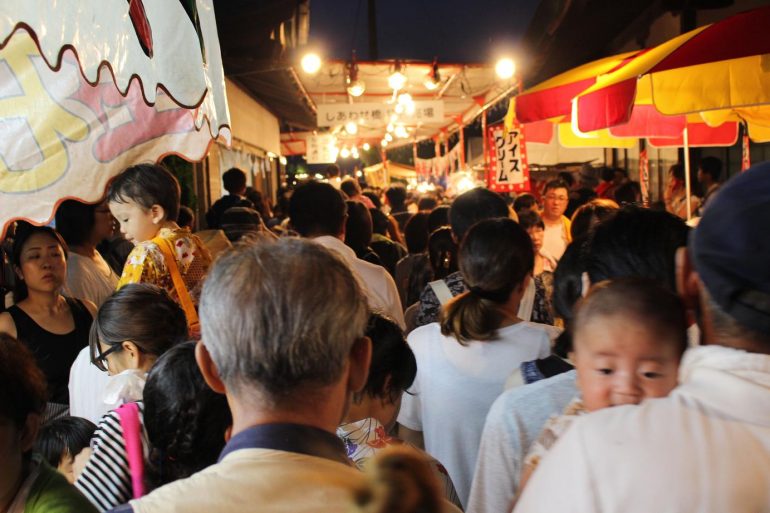 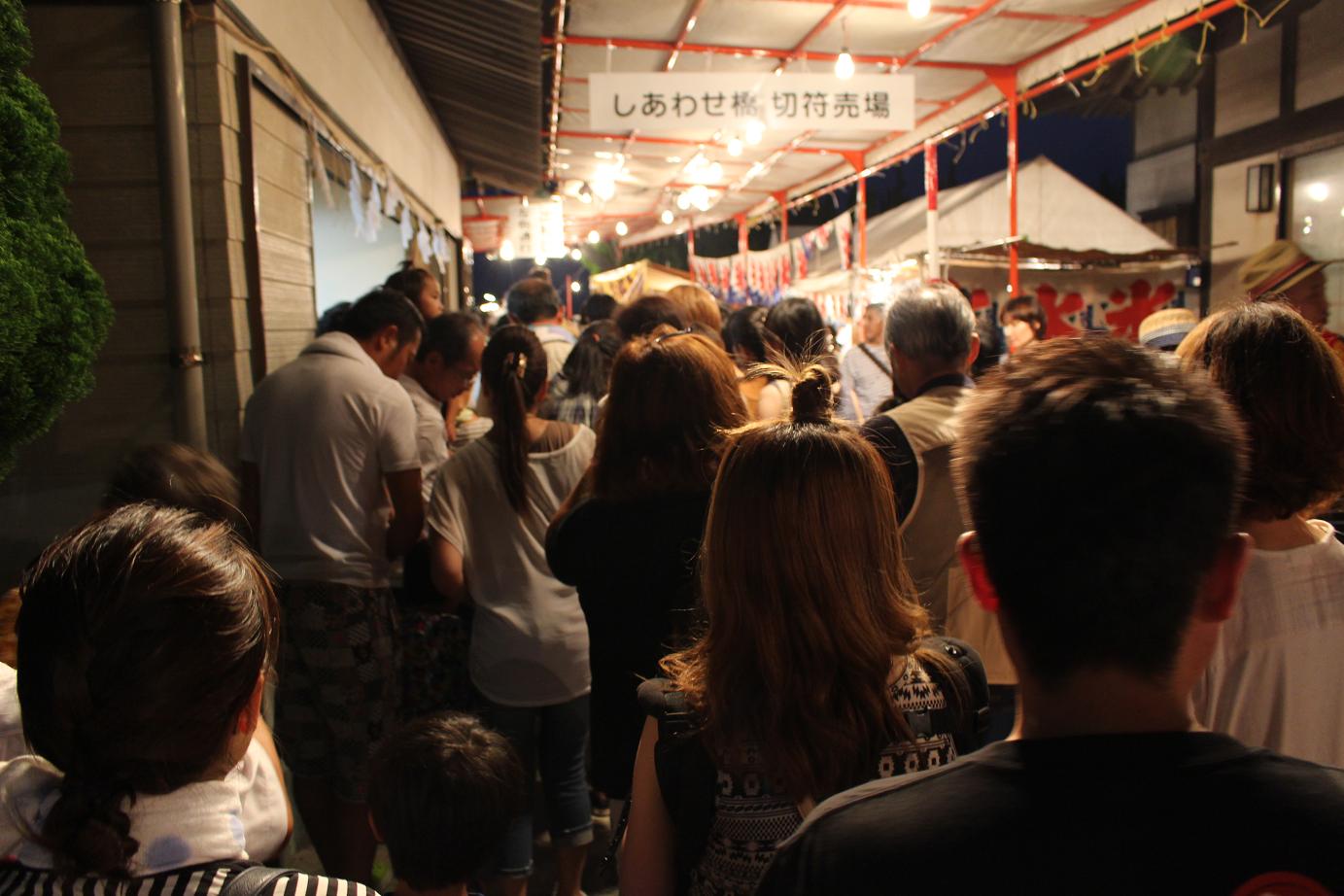 The sign says SHIAWASE Bridge “ticket counter”. Because of the crowded people, it took about 20 minutes from the station gate to here. Price of the bridge is 300yen for adult and 100 yen for the child. 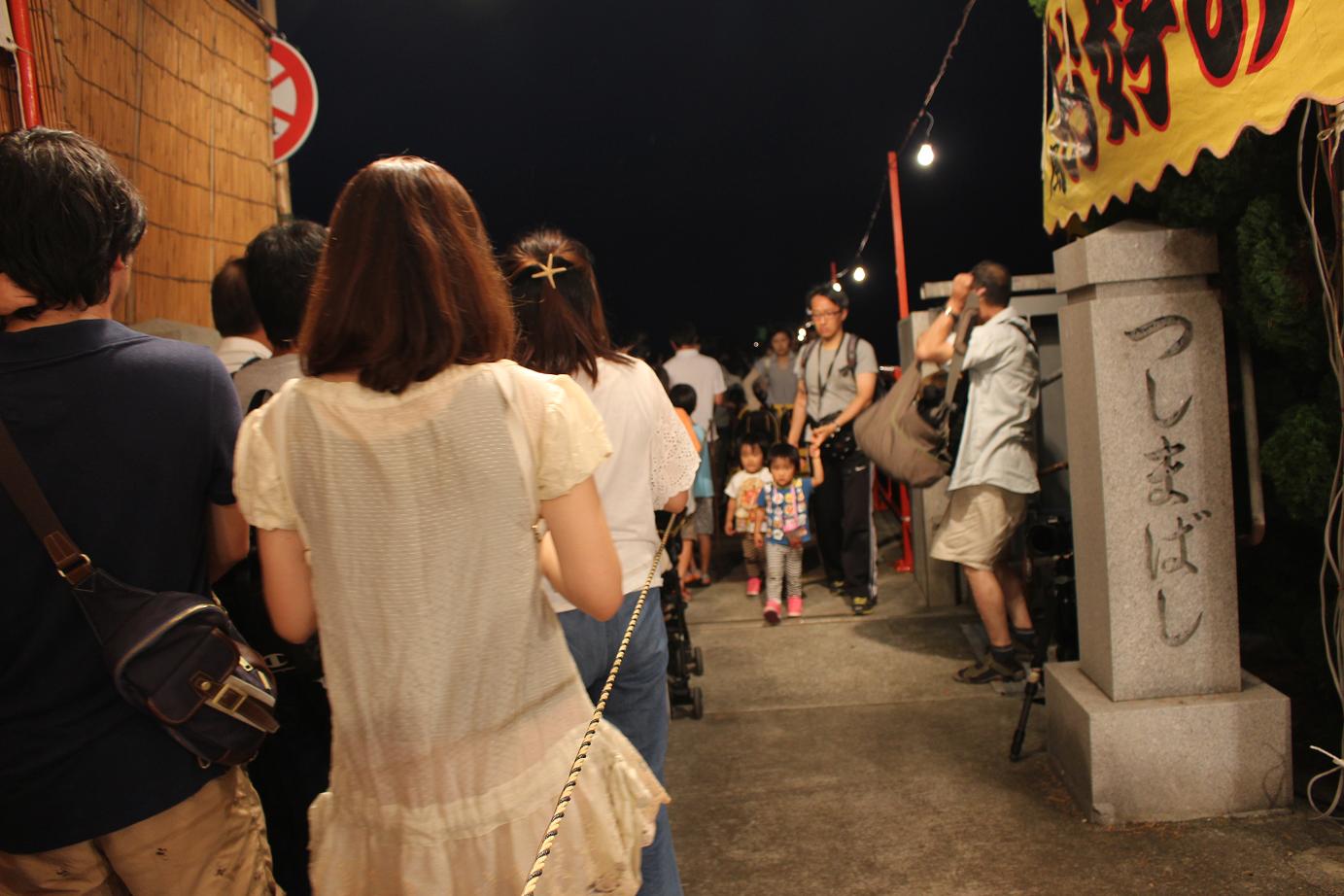 Tsushima Bridge is called SHIAWASE (happiness) Bridge because people believe they receive good fortune from visiting the Tsushima-shrine. People originally used to visit the shrine by ship and Mr. Kurata, who was the village chief of the Oomi village, built the bridge and the current bridge is the 4th generation since then. 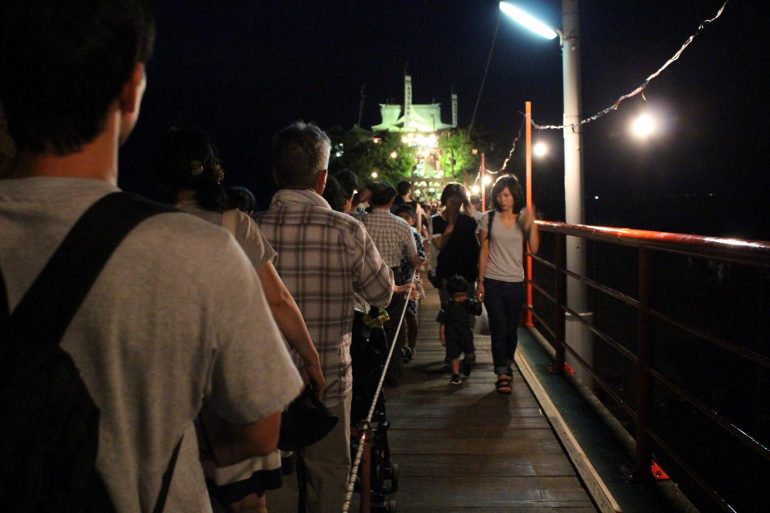 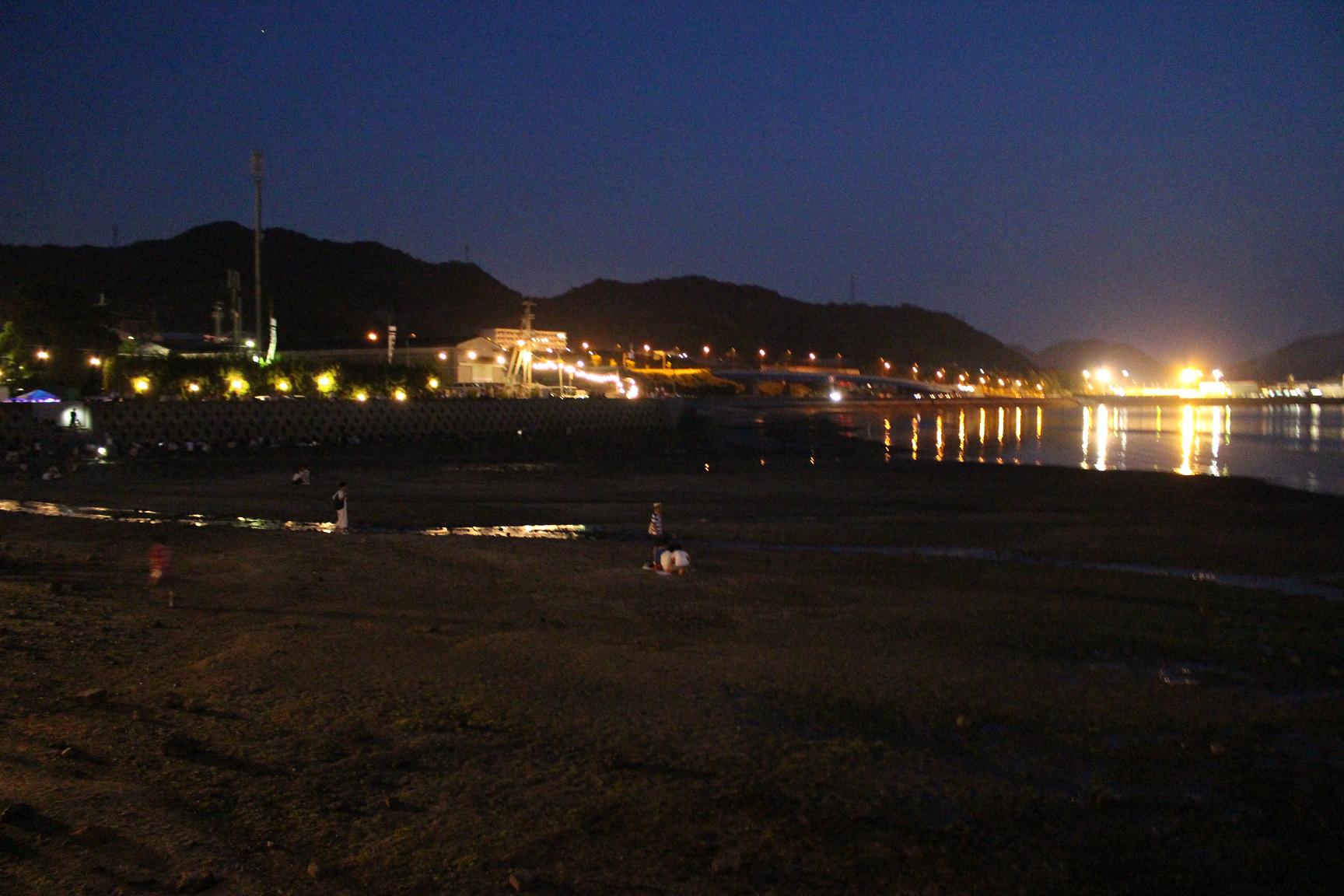 You can go down to the beach when the tide is low. 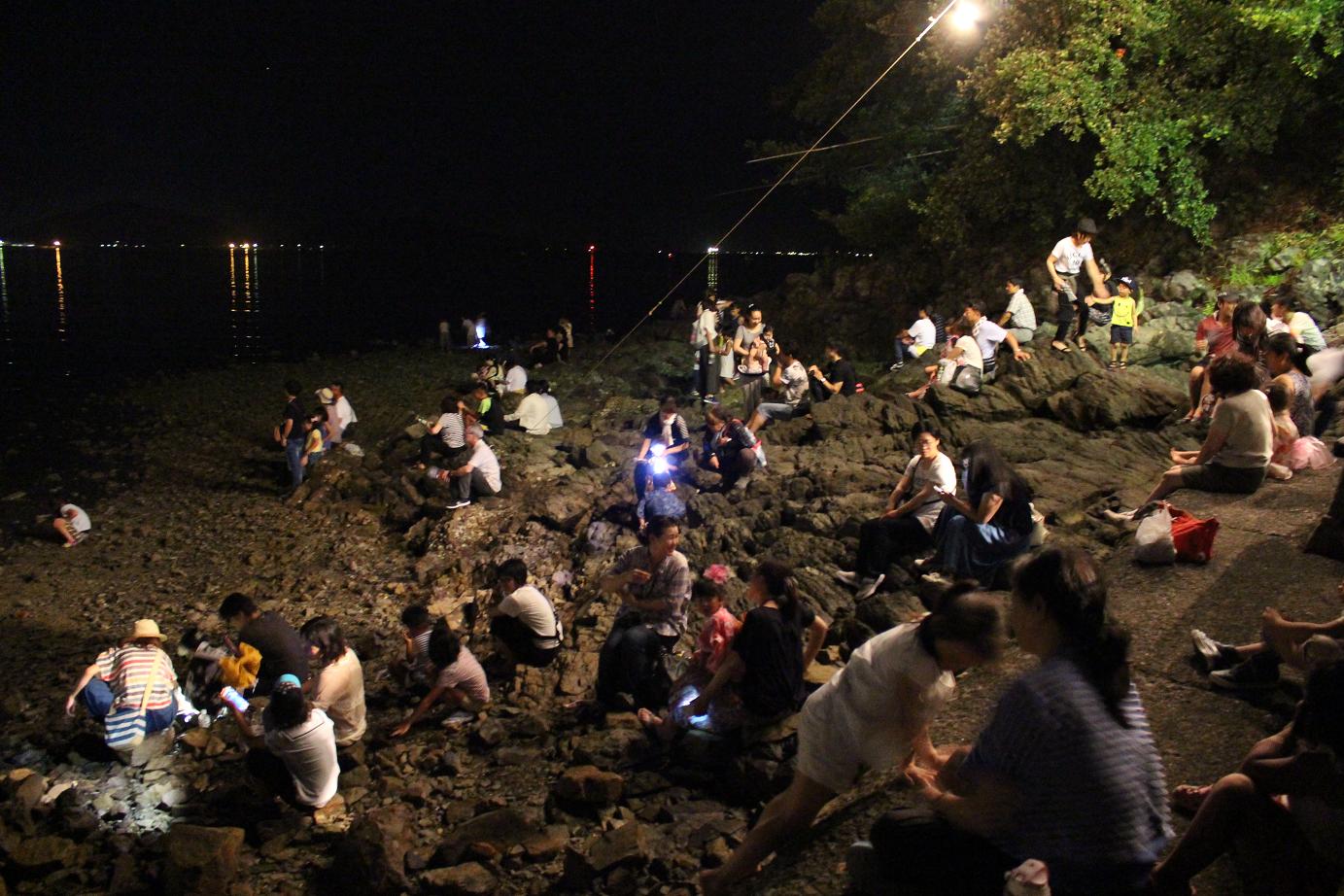 People are sitting on the beach and waiting for the fireworks to start. 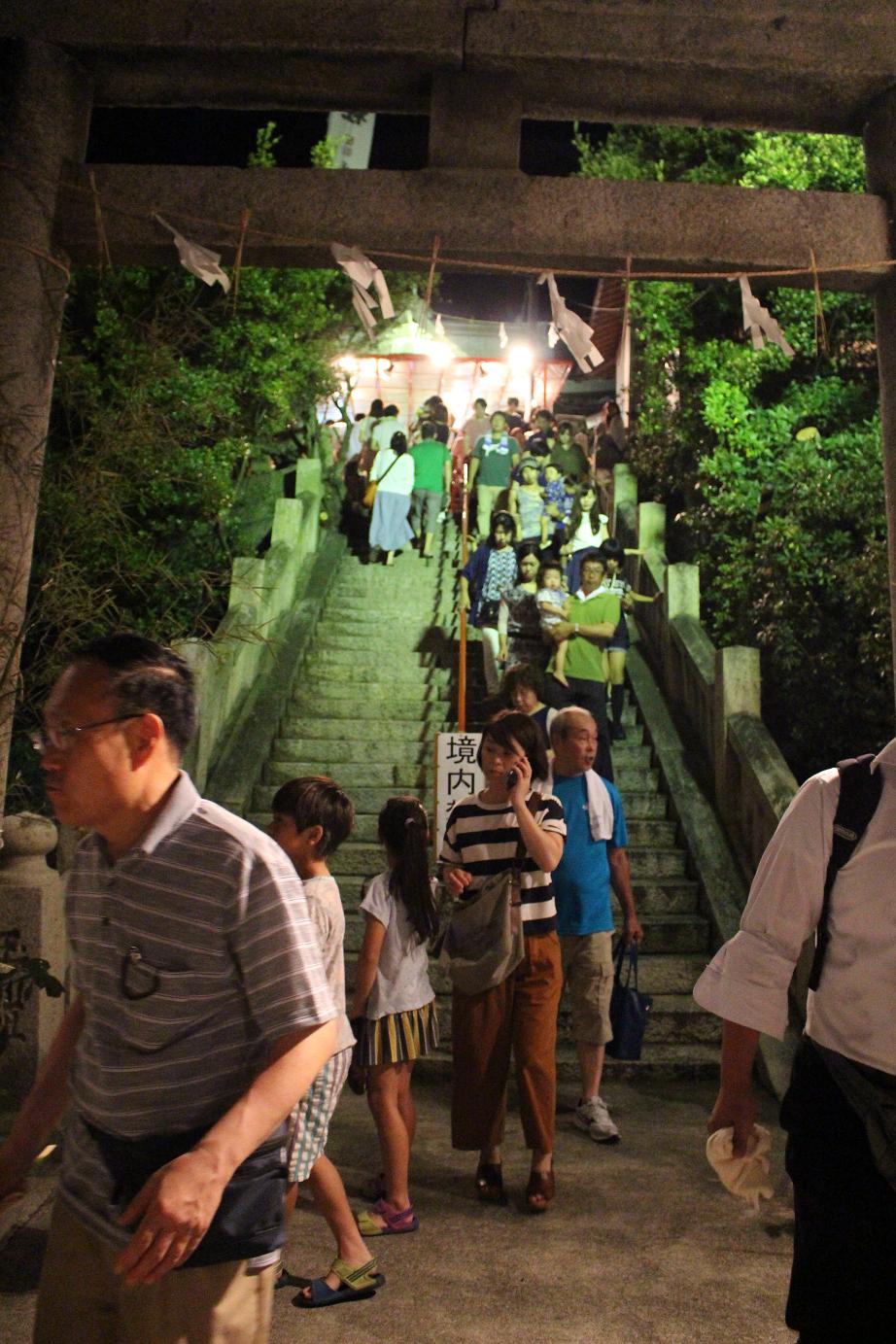 After crossing the bridge, there will be stairs up to the shrine. 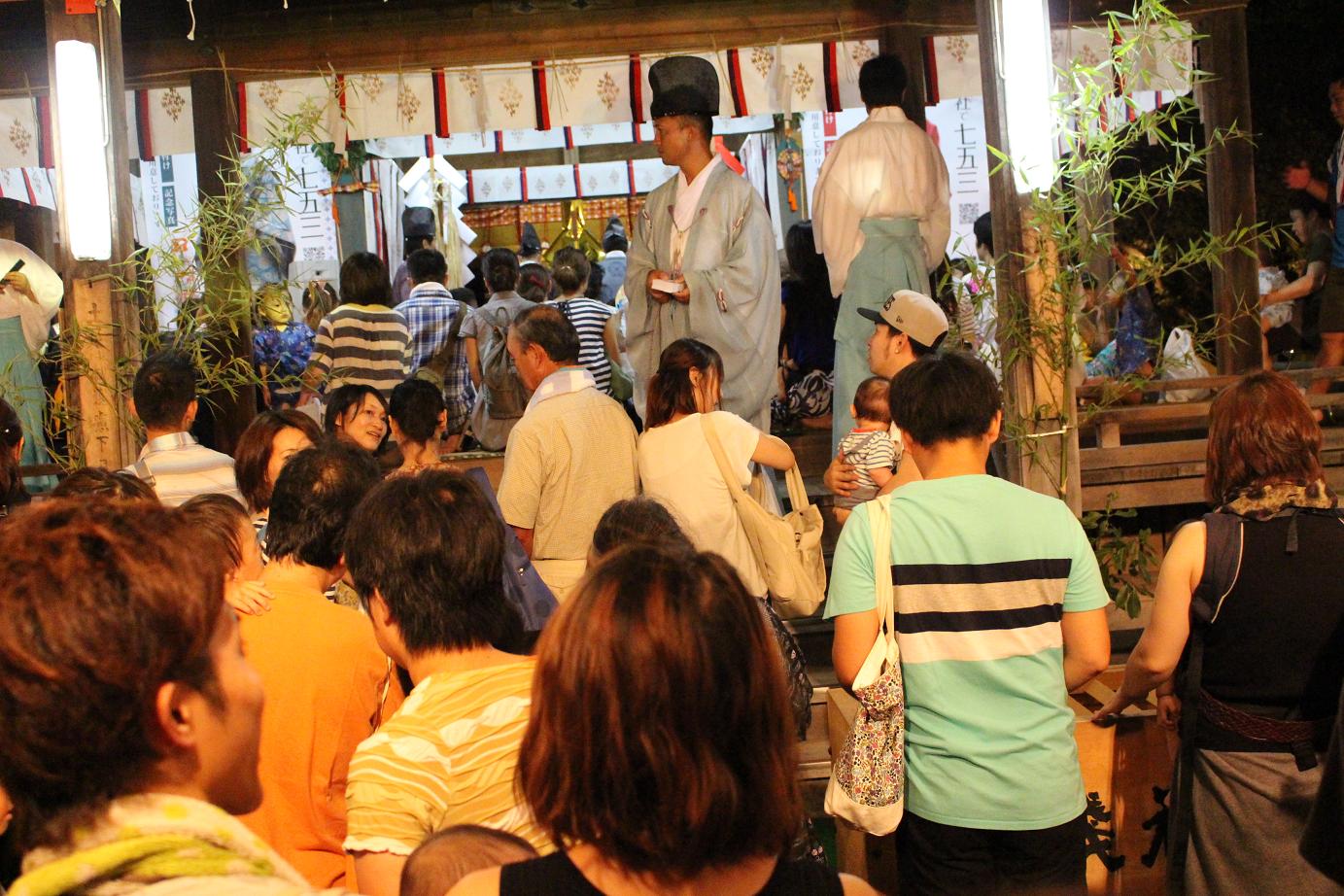 Usually people can only pray at the YOUHAIDEN (the substitute place of worship for the god that is enshrined at a distant place) in front of the SHIAWASE Bridge for health and good-being, but people can visit and pray at the main shrine on the island during this festival. 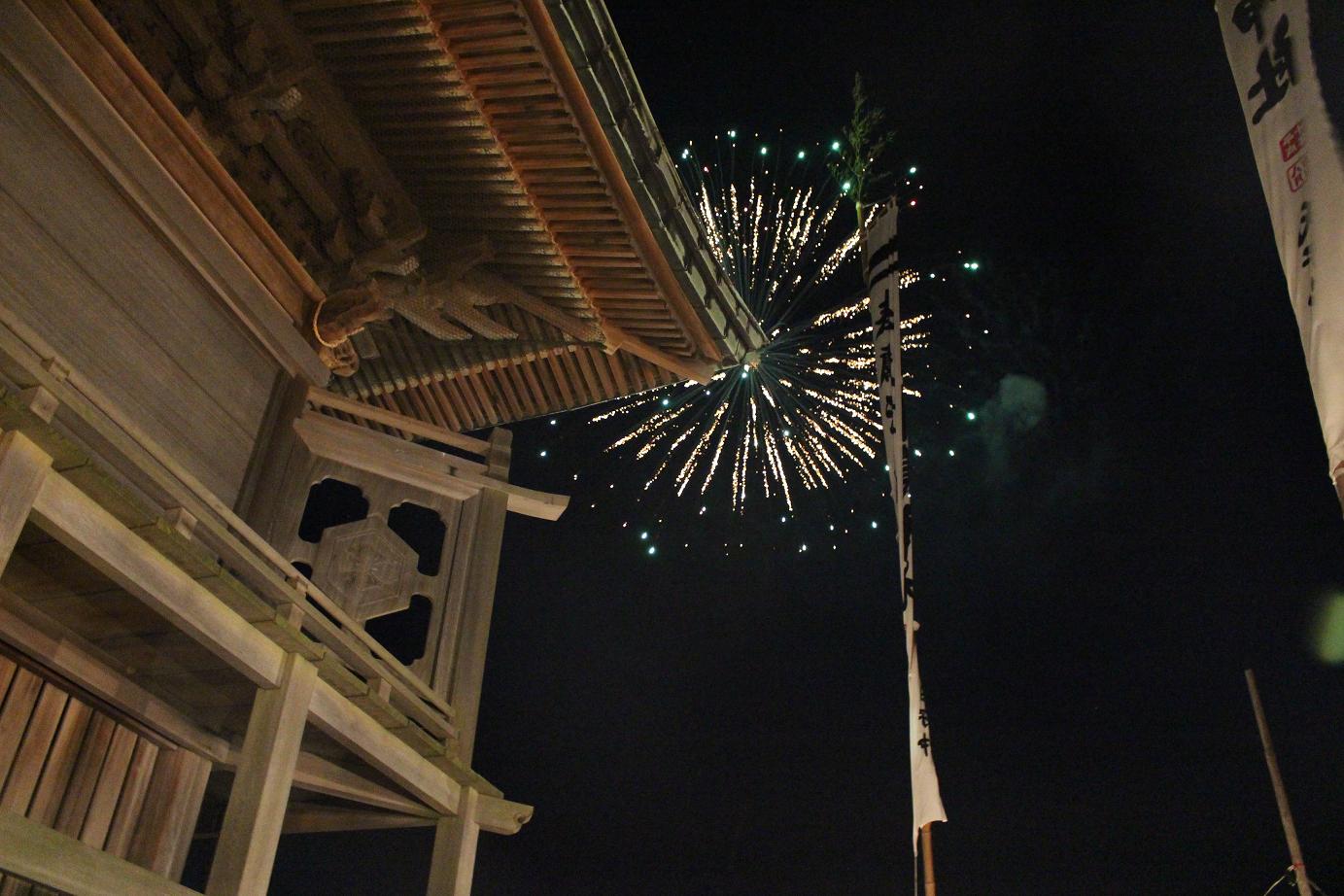 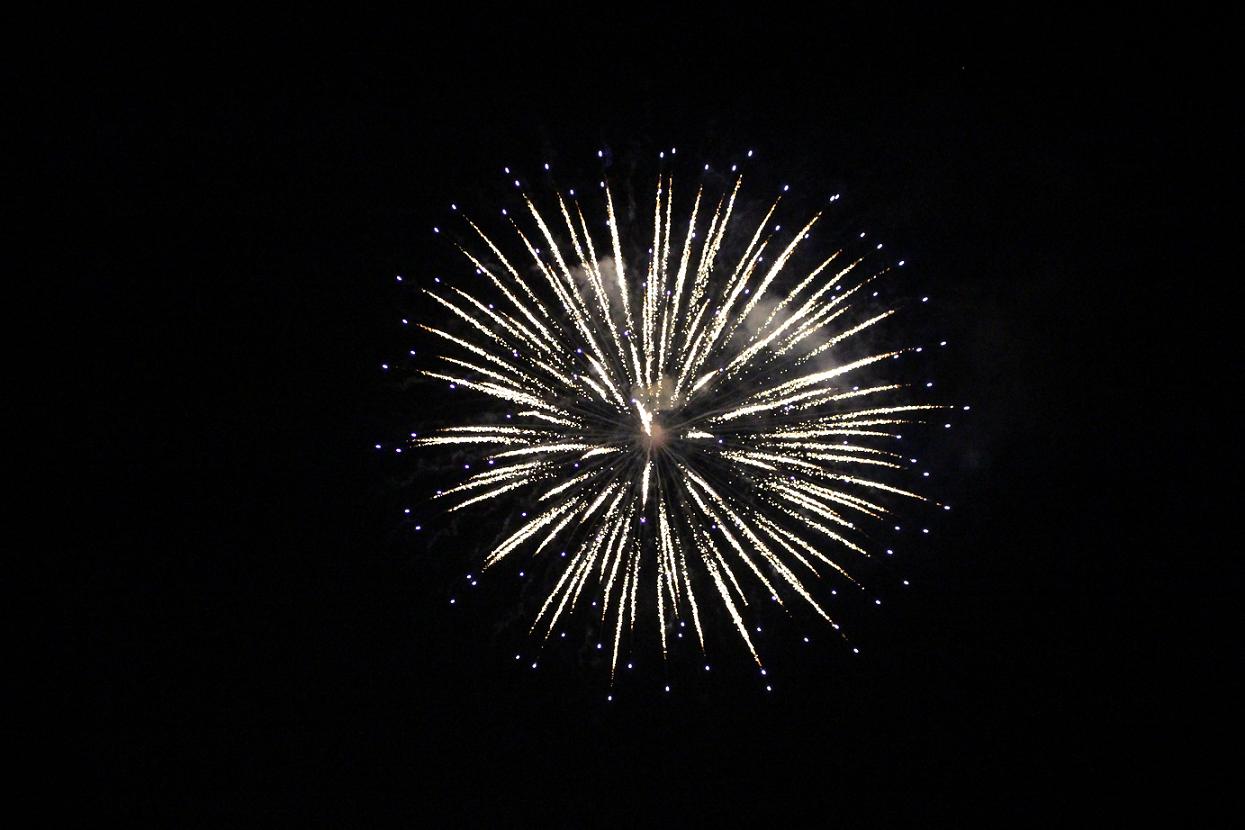 Unlike other fireworks festivals, ceremonial fireworks shot from the Kaiganji coast are usually set off one by one. Enjoying the relaxing views of the fireworks when crossing the bridge is a very unique point of this summer festival.

Wind that blows in this land is considered as “the winds of god”. Locals believe that receiving the wind while crossing the bridge will blow away all of the bad things such as guilt and sickness. If you ever come to Kagawa during the summer, please receive the power of the wind from Tsushima-shrine and be energized to enjoy the remainder of your journey.