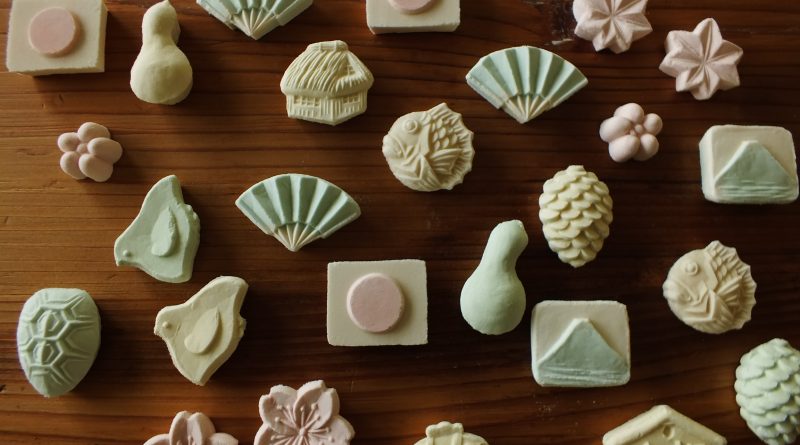 Among a number of different kinds of sugar, there is one supreme kind – known to be “the king of all sugars” to the Japanese – that is, Wasanbon.

About a 5-minute walk from Kotoden Hanazono Station, MAMEHANA is a little studio where you can make traditional Japanese sweets made from wasanbon sugar and taste them fresh.

The history of wasanbon-making goes back about 200 years.
Back in the Edo era, the eighth-generation heir of the Tokugawa Shogunate, Yoshimune, encouraged fine sugar manufacturing to his people to evolve the existing brown sugar made in the Satsuma (old name for Kagoshima) domain. After much struggle, a doctor in the Sanuki (old name for Kagawa) domain came up with a unique method to create the most refined form of white sugar, which later became one of Sanuki’s major trade items along with cotton and salt (known as “the three whites of Sanuki”). 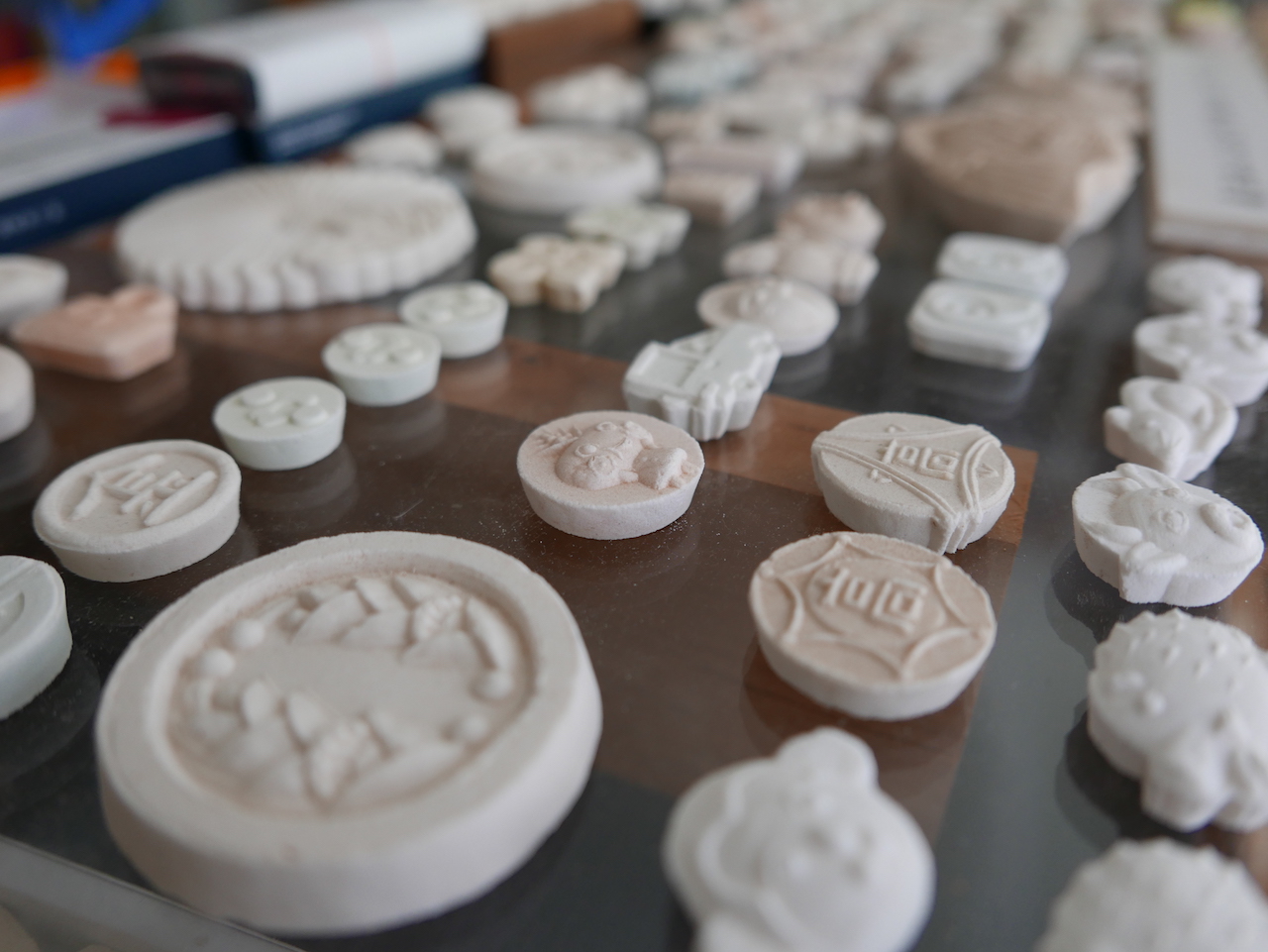 With the help of the modern-day technology, you would think some of the manufacturing stages in wasanbon-making would have been simplified since then. However, it remains almost exactly the same as the way they did it 200 years ago – except that they may now wear a smock and a cap, instead of a kimono and a hachimaki.

Having stressed how traditional it is, the appearance of MAMEHANA may catch you by surprise. 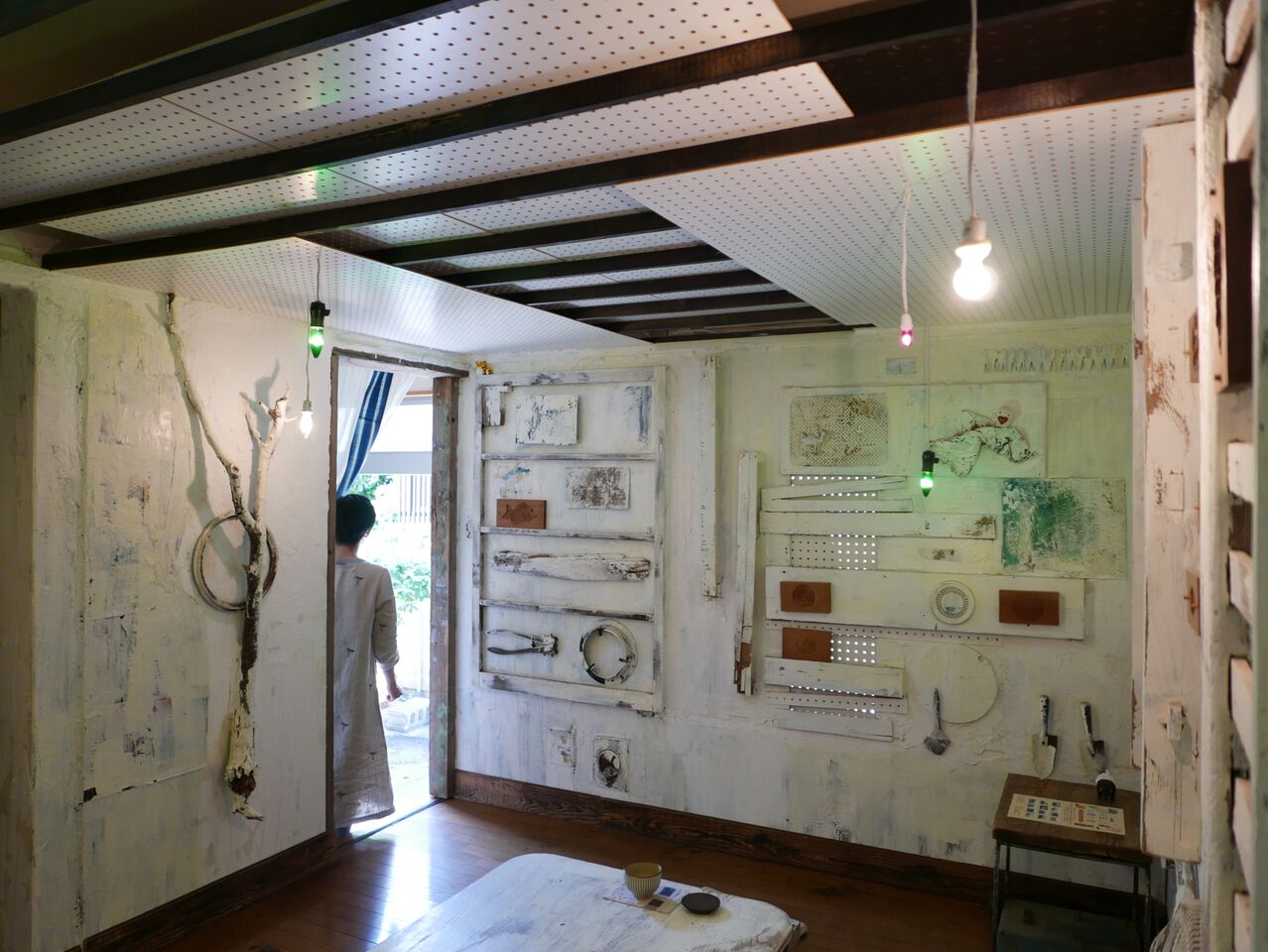 The interior of the studio is appointed by Takuya Kamiike（カミイケ タクヤ）, a Kagawa-based artist who has created a space where traditional craft meets contemporary art. 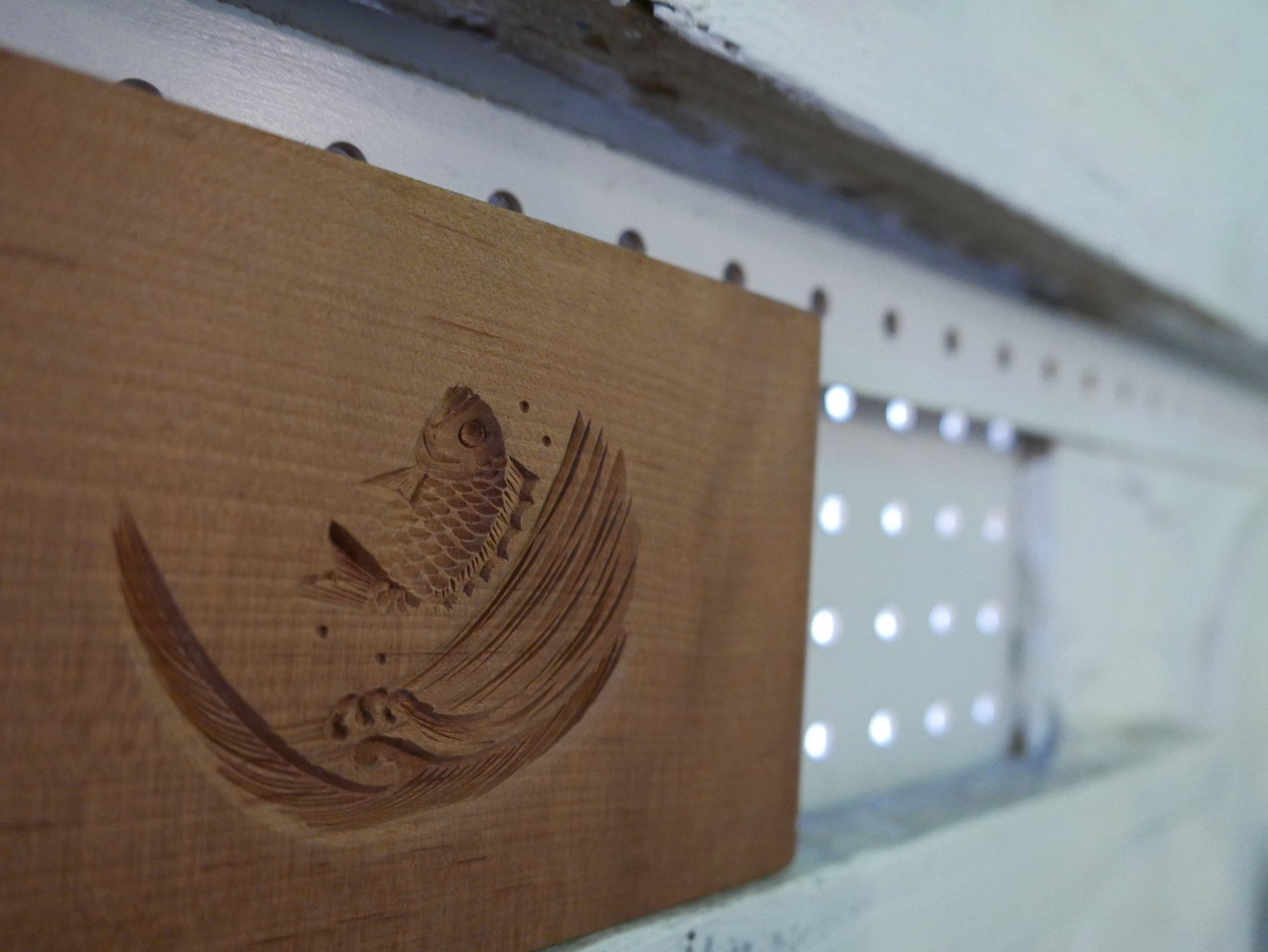 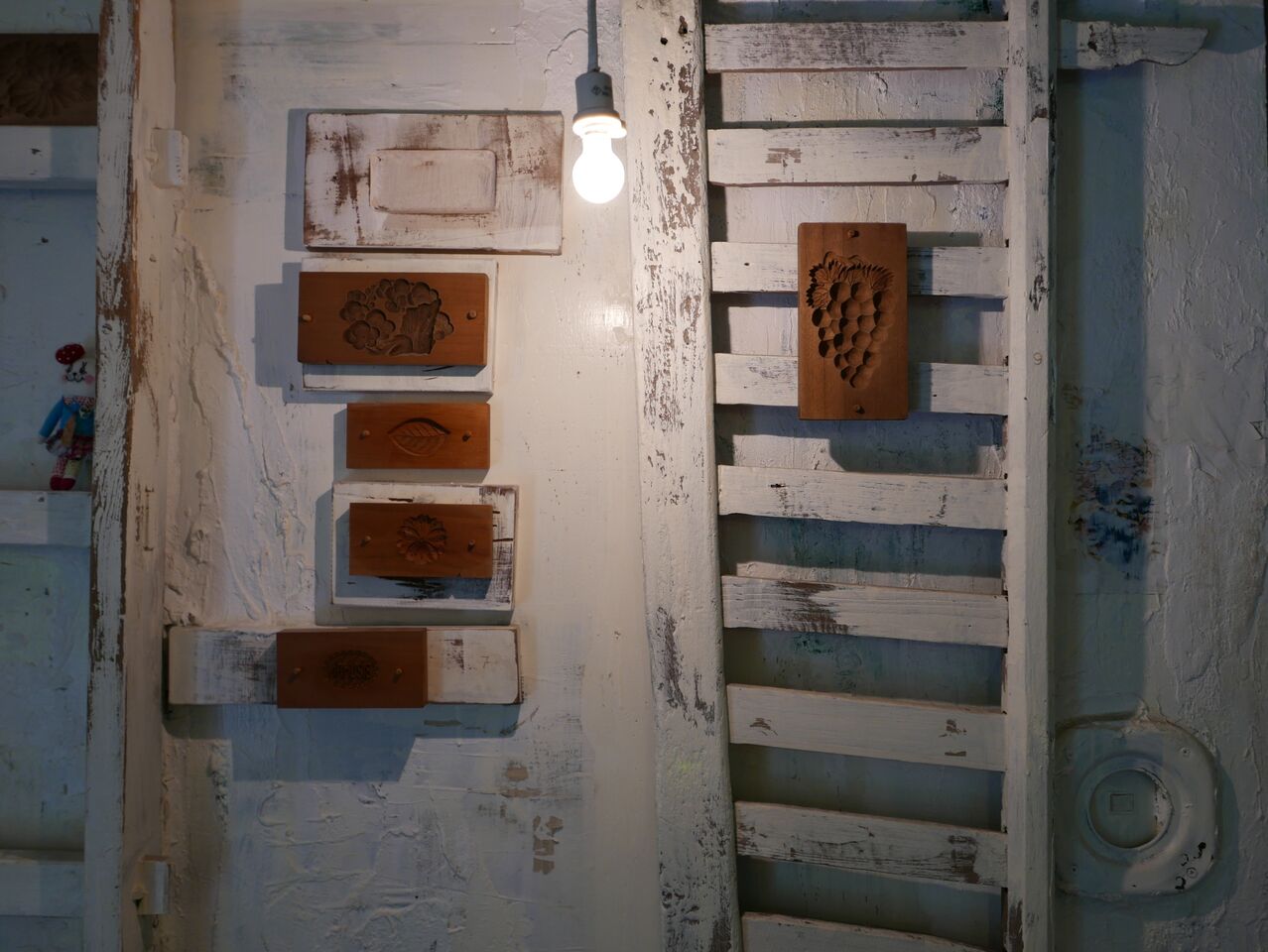 The wooden molds that decorate the walls of the studio have been used in traditional sweets making and are made of over one-hundred-year-old mountain cherry trees. After being cut down, they are dried for two years and left to age for a further three years before a wood-carver (today only a few remain in all of Japan and just one in Shikoku) gets his hands on breathing new life into them. 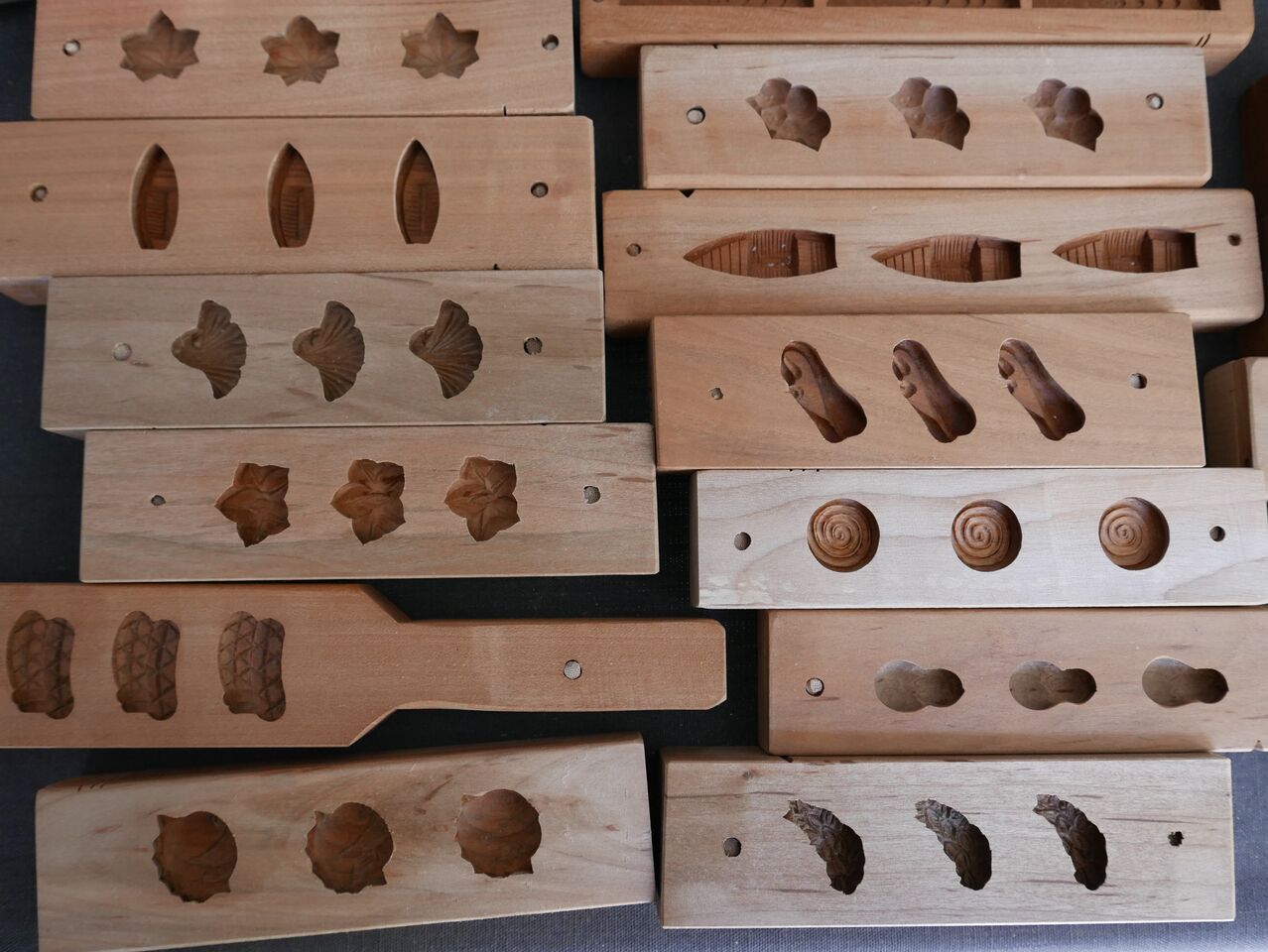 It is easy to let your mind lost track of time thinking about how many years it took these little molds to be sitting in your hands today, let alone the generations the recipe has been passed on for. However, the actual sweets-making part is surprisingly simple and fun for both children and adults. 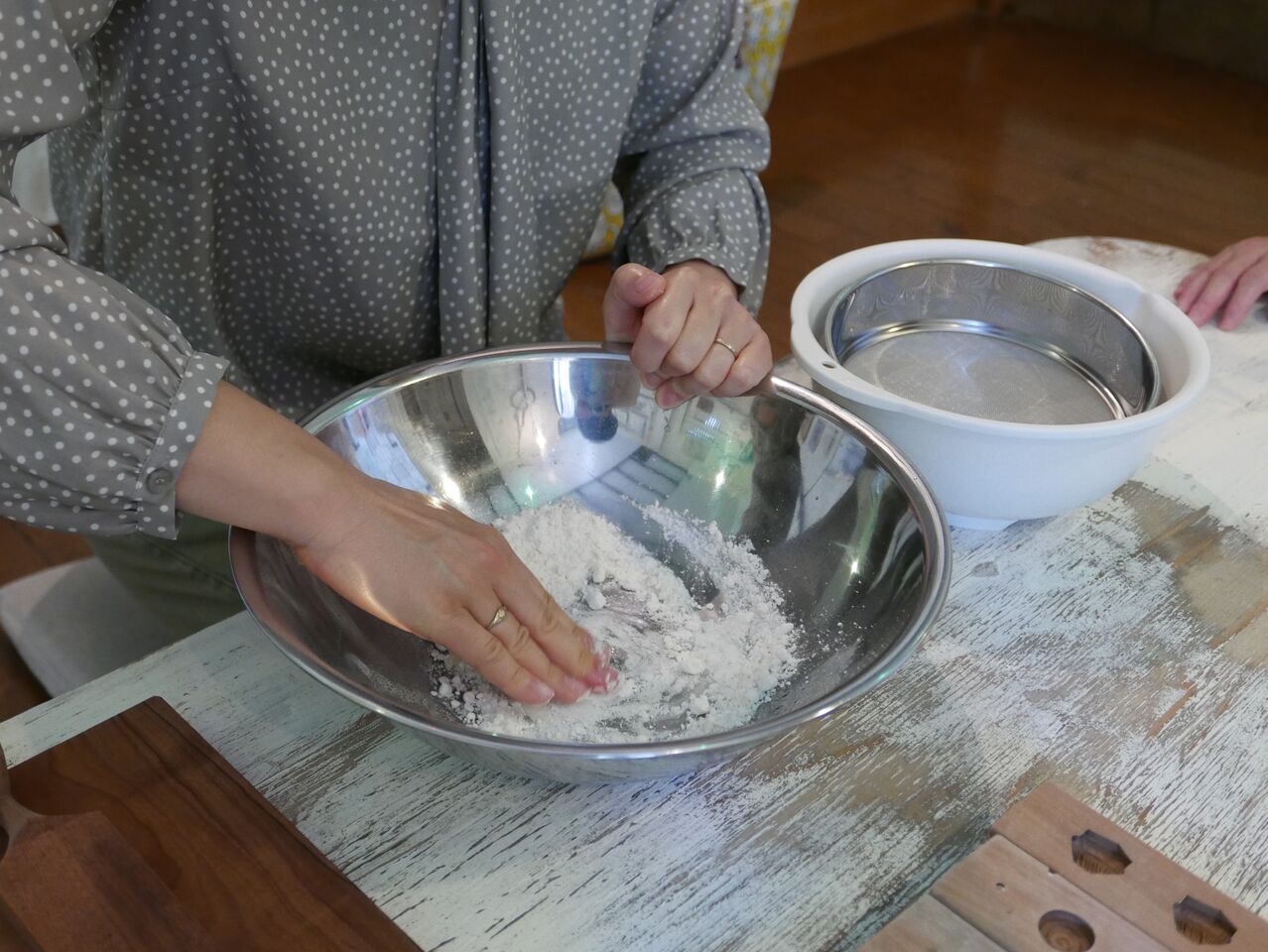 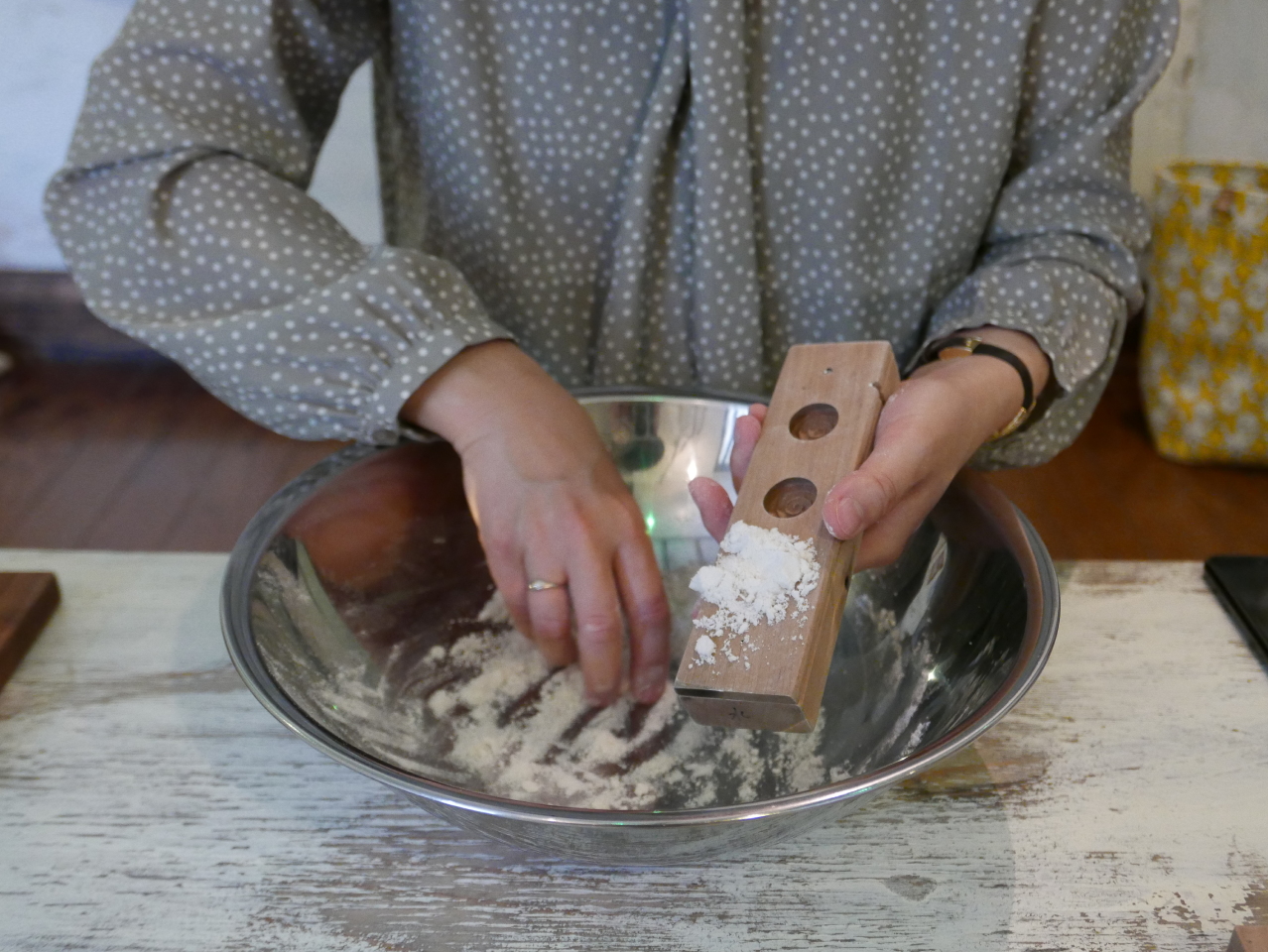 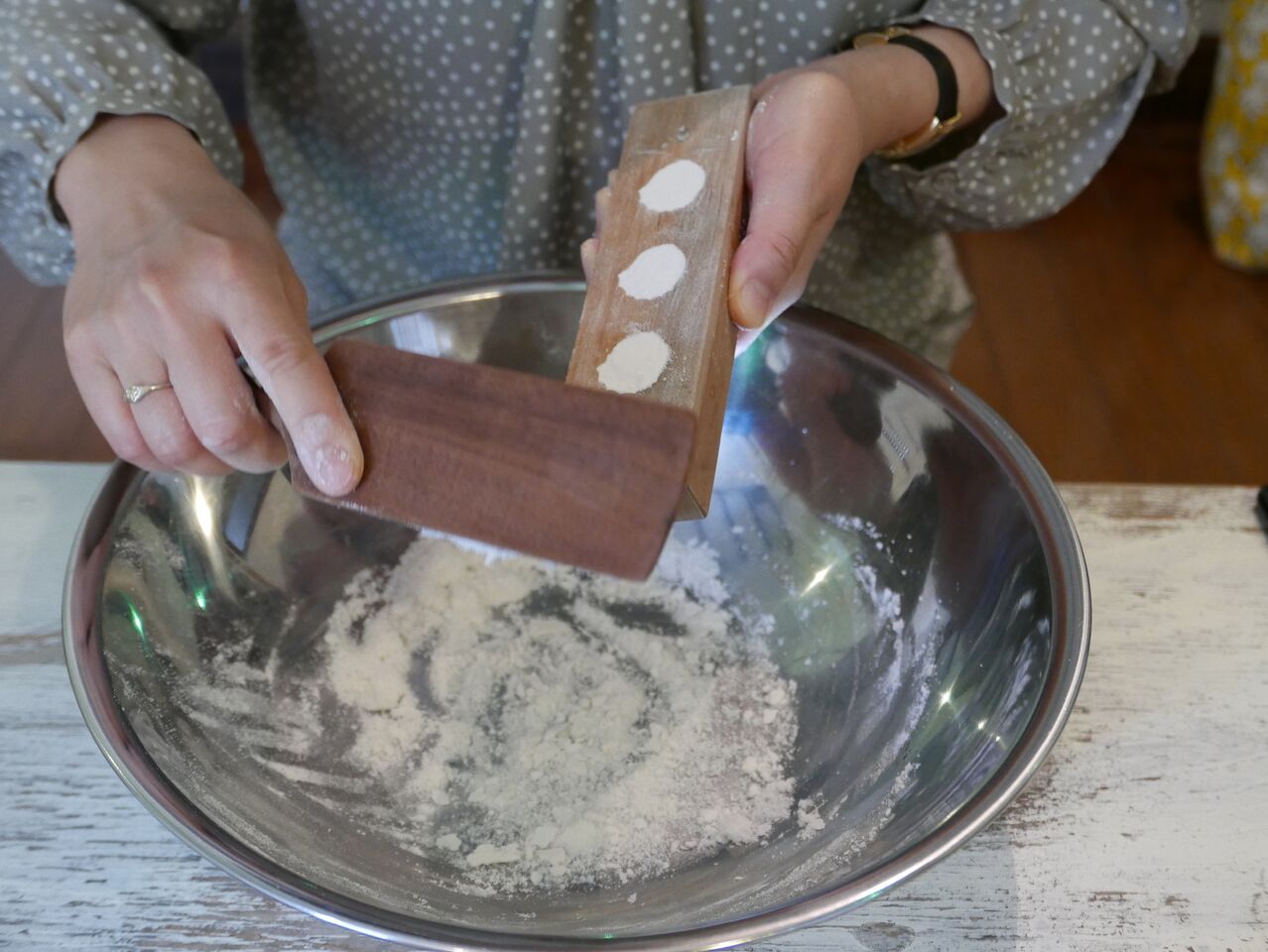 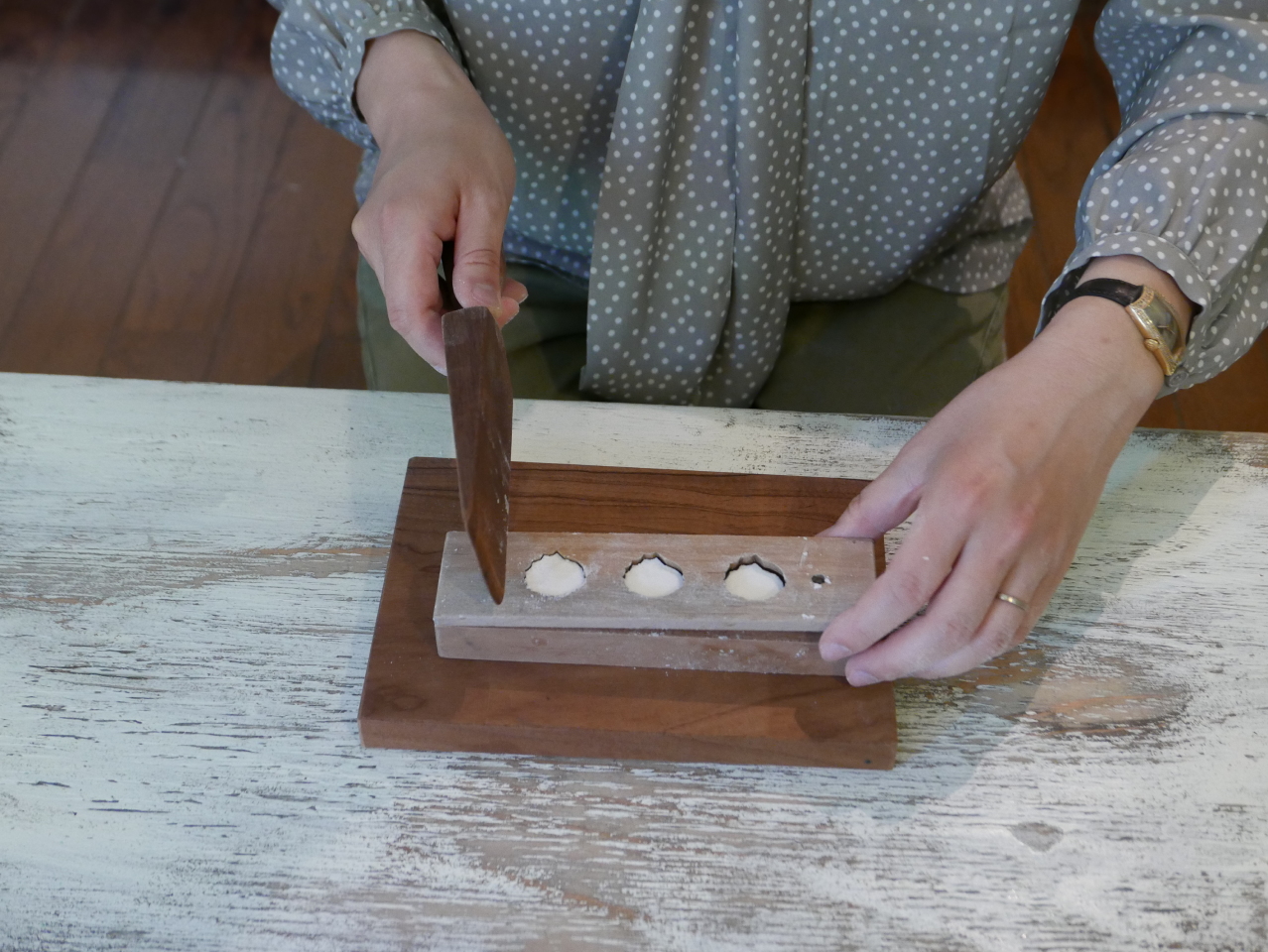 Moisten the wasanbon-sugar with an atomizer, blend in the moisture, sift the sugar, put it in a mold & strip.

It is this simple, but there is one trick: the moment you spray water to the sugar, the clock starts ticking fast. You have to complete the whole process before the water in the sugar dries out, otherwise the shape of the sweets won’t be formed neatly when they come out of the mold, or worse, they won’t be formed at all. 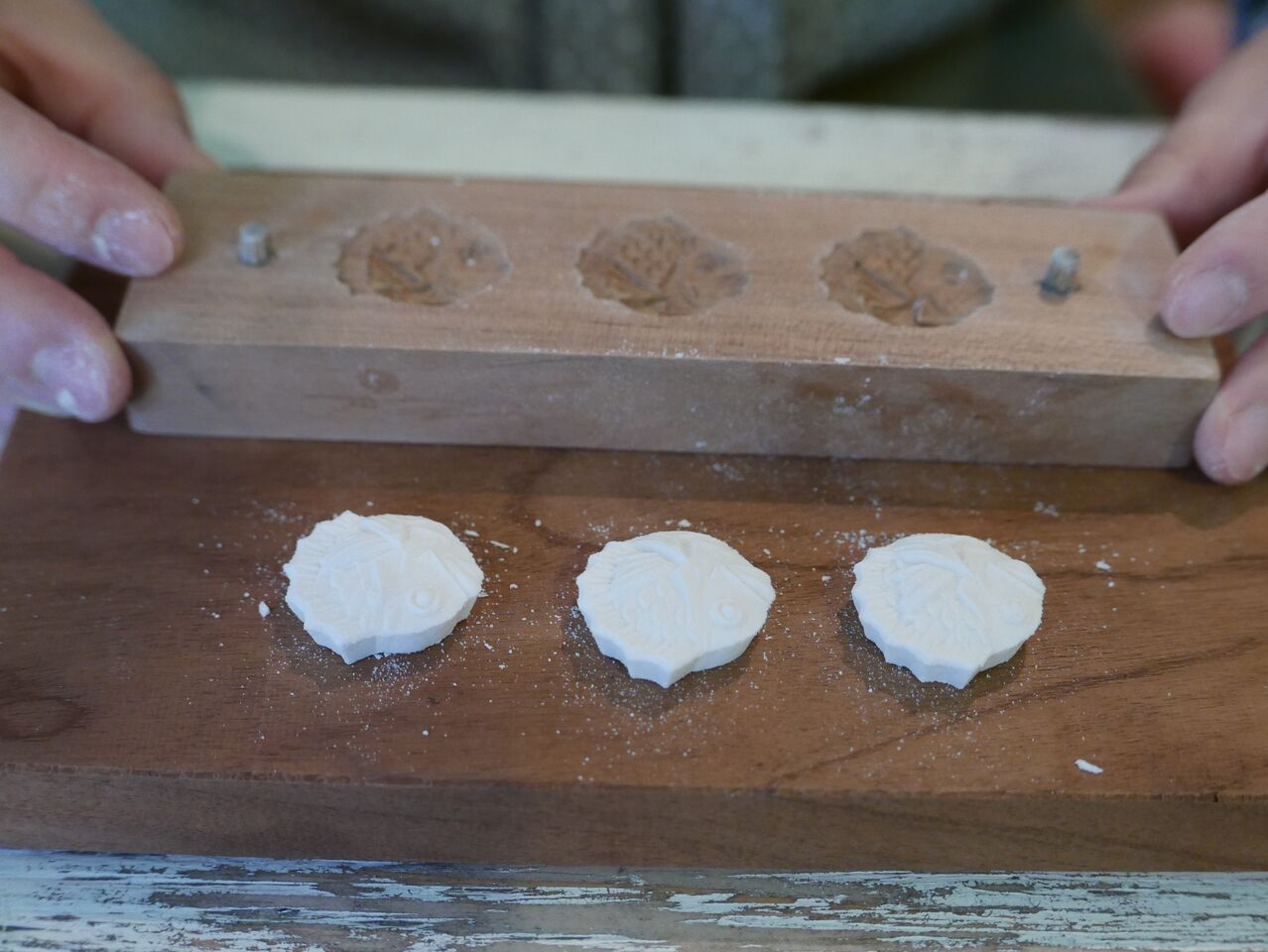 After a few minutes of hasty operation, your wasanbon-sweets come out of the molds, looking just like the way they did when they were offered to feudal lords. Your privilege, in contrary to the rulers of the day, is being able to enjoy them at their freshest. 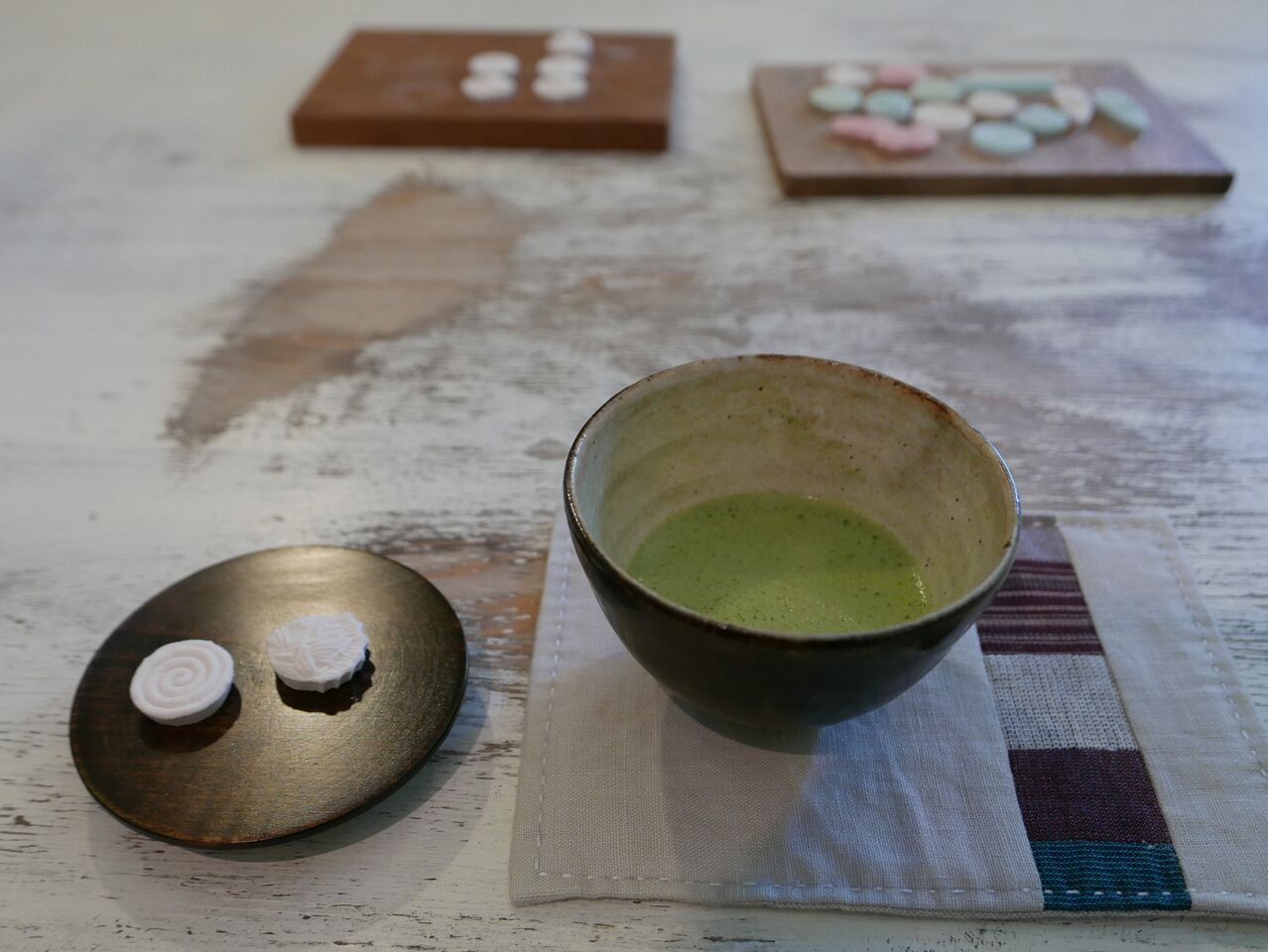 The soft and non-persisting sweetness is a distinctive characteristic of wasanbon sugar and the pleasant bitterness of matcha (powdered green tea) served alongside makes a perfect match, but how they crumble down into fine powder in your mouth is something you don’t get from the ones you buy in a shop and can only be experienced by making it yourself. 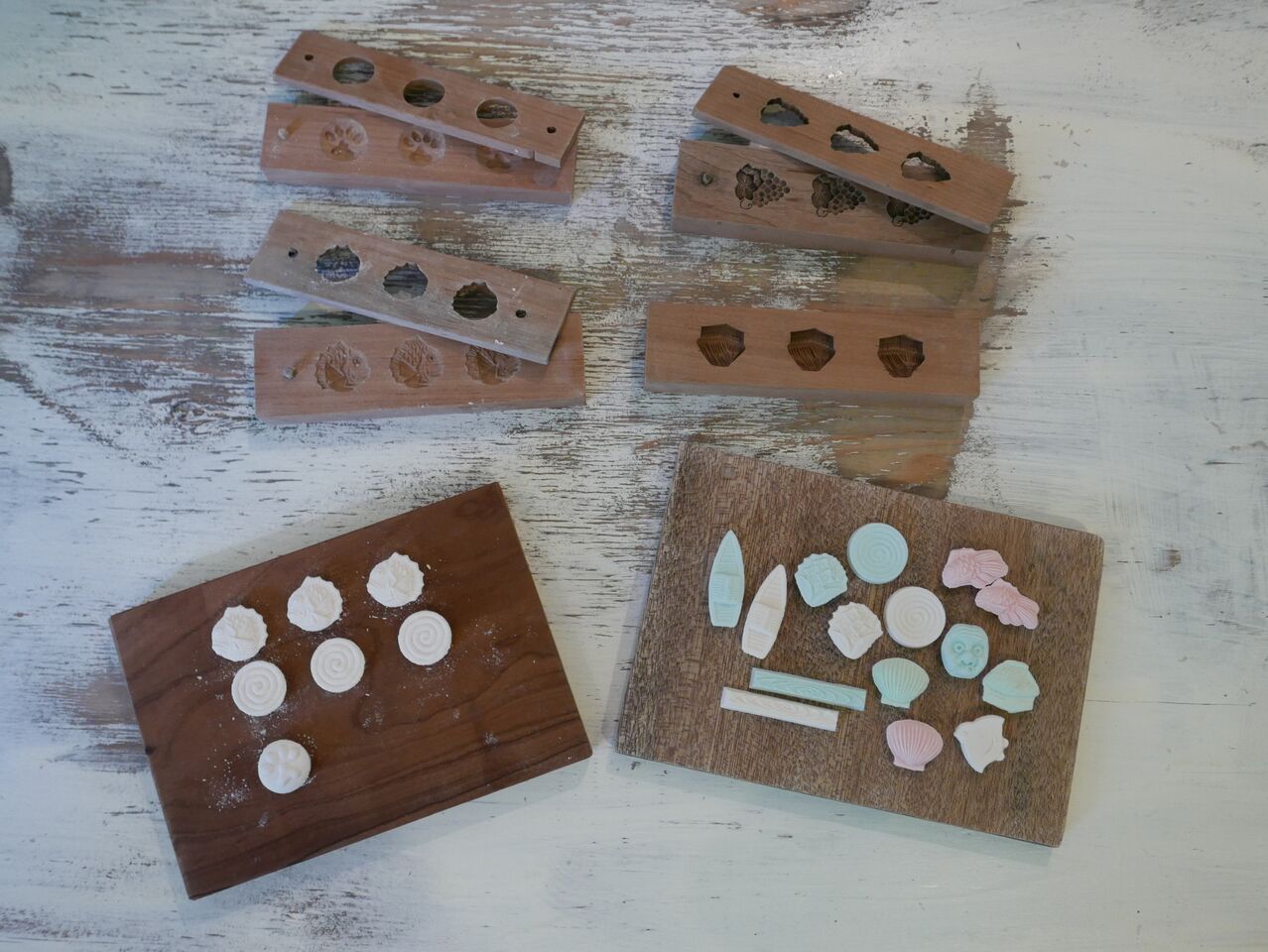 “We ask everyone who comes here to have a try. Even if it’s a grandpa and his grandchild, we don’t let the grandpa watch, we also ask him to join and make his own,” the studio owner Ayumi Uehara explains “the house rule” with a gentle smile.

“Because even though the process is very simple, there is something worthwhile to be discovered for everyone in all generations in wasanbon-making. The feel of fine sugar, the smell, the way it fits in the molds – it’s been eight years since I opened this studio but even today, every time I remove the molds, I get fresh excitement looking at what’s just come out of them.”

The motif of the molds changes from cherry blossoms for spring to sweetfish for summer, maple leaves for autumn and so on… what will you be making when you visit this wonderful little studio?