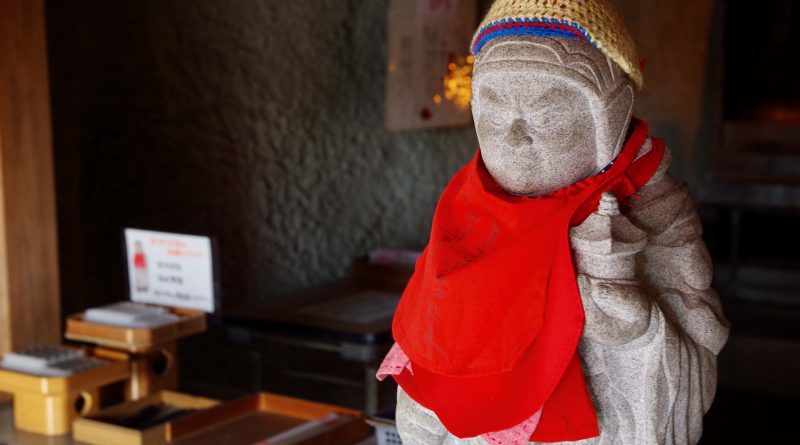 In Japan, people started to believe in the Seven Lucky Gods during the Kamakura period (1185-1333). The faith then grew up quickly through the prosperous business area of the Muromachi period (1338-1573), and ended firmly rooted in the Edo period (1603-1867). Every year from January 1st to 15th, people would stay at home waiting for the Seven Lucky Gods to descent and bring good fortune to them. In the early 19 century, people actively visited temples dedicated to the Seven Lucky Gods praying for their family’s safety, longevity, good business, and successful career.
The Seven Lucky Gods are usually not worshipped in the same temple, so it may take a lot of time to visit them all. However, temples should also be regarded as treasure houses of local history, culture, and religion, and thanks to the prosperous Edo period the pilgrimage developed until nowadays.

Japanese people usually picture the Seven Lucky Gods sailing a treasure ship full of valuables and foods. Besides going on a pilgrim in January, some people also draw the treasure ship on January 2nd and put the drawing under their pillow hoping the ship would appear in their new year’s first dream to bring them good fortune.

The faith of the Seven Lucky Gods is not related to an only religion, each god has a different origin but they are all related to luck, fortune, and longevity. For example, inherited from Hinduism there are Daikokuten(大黑天) the god of kitchen, field, and fortune; Bishamonten (毘沙門天) the god of war, and Benzaiten (弁財天), the only goddess, bringing good fortune. Besides, Fukurokuju (福禄寿) and Jurojin (寿老人) come from Chinese Taoism while Hoteison (布袋尊) is inherited from Buddism. The only Japanese god in the Seven Lucky Gods is Ebisu (恵比寿) who is in charge of fishery, business, and agriculture.

Recently, many Japanese local governments have been designing touristic tours around the theme “Tourism and Religious faith” to improve the local economy. These Seven Lucky Gods pilgrimages are scenic routes drawn for the worshippers to travel through the seven temples and enjoy the local culture. 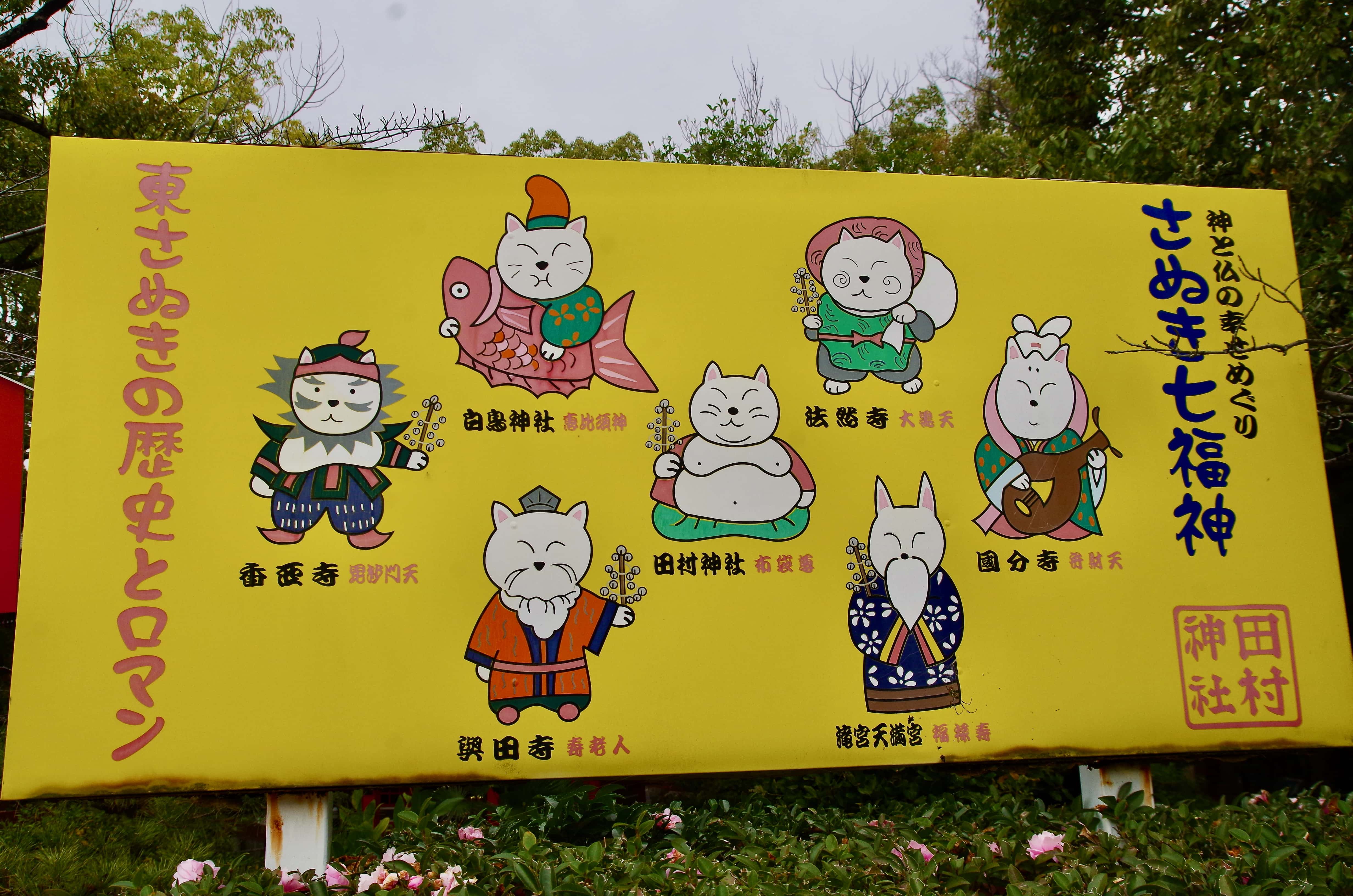 The “Shikoku Sanshu Seven Lucky Gods route” is located in the west Sanuki area (the west Kagawa prefecture) and includes Mitoyo city and Kanonji city, and it would take about six hours by car. However the gods worshipped on this route are different as Fukurokuju is replaced by the Old Man of the South Pole(南極老人), and Jurojin by the goddess Lakshmi (吉祥天), therefore there are two feminine gods in this special Seven Lucky Gods. In 2019, the route adds the Fudo Myoo (不動明王) to protect the Seven Lucky Gods and changes its name to “Shikoku Sanshu Shichifuku Happou temple” (四国讚州七福八寶之寺). 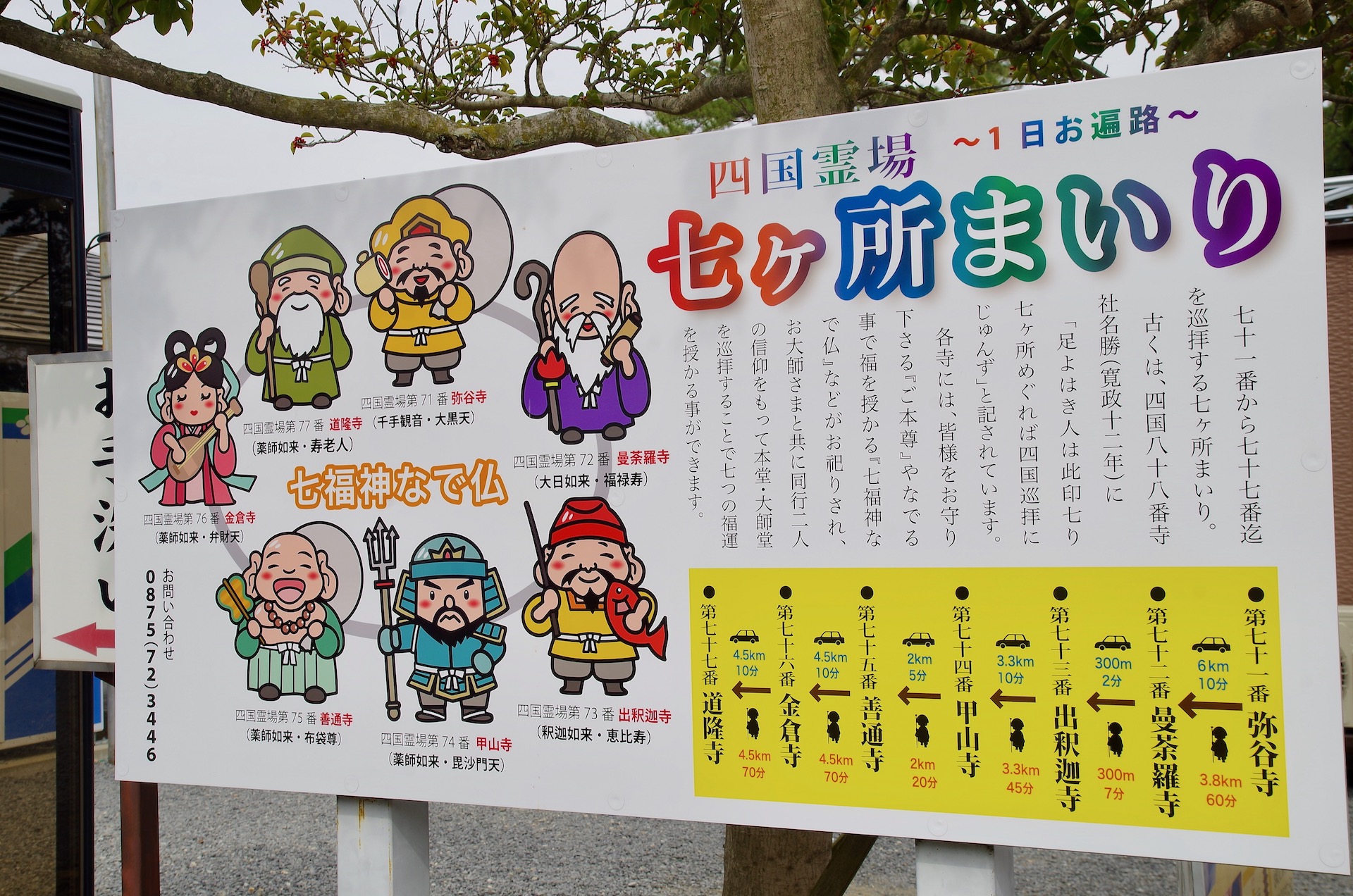 Originated in the Edo period, Shikoku Pilgrimage, symbol of Shikoku, had a pilgrimage route named Nanakashomairi (七ヶ所まいり, pilgrimage around seven places) located in the middle of Sanuki. People believed that they could get the same good fortune and luck as the pilgrims finishing the Shikoku Pilgrimage, if they could visit the all seven temples from the Iyadaniji temple(彌谷寺, No. 71) to the Doryuji temple (道隆寺, No 77) included within a day.

However, the popularity of this route declined after 1950. For retrieving the past prosperity, in 2011 the seven temples planned a new route named “Seven Lucky Gods Nadebutu” (七福神なで仏) which takes about five hours by cars. This route is not only offering to visitors a taste of the experience of the Shikoku Pilgrimage but is also a real pilgrim to pray the Seven Lucky Gods.

Besides the pilgrimage combined with tourism, some shrines and temples set up Seven Lucky Gods in their precinct to allow visitors to worship them easily. 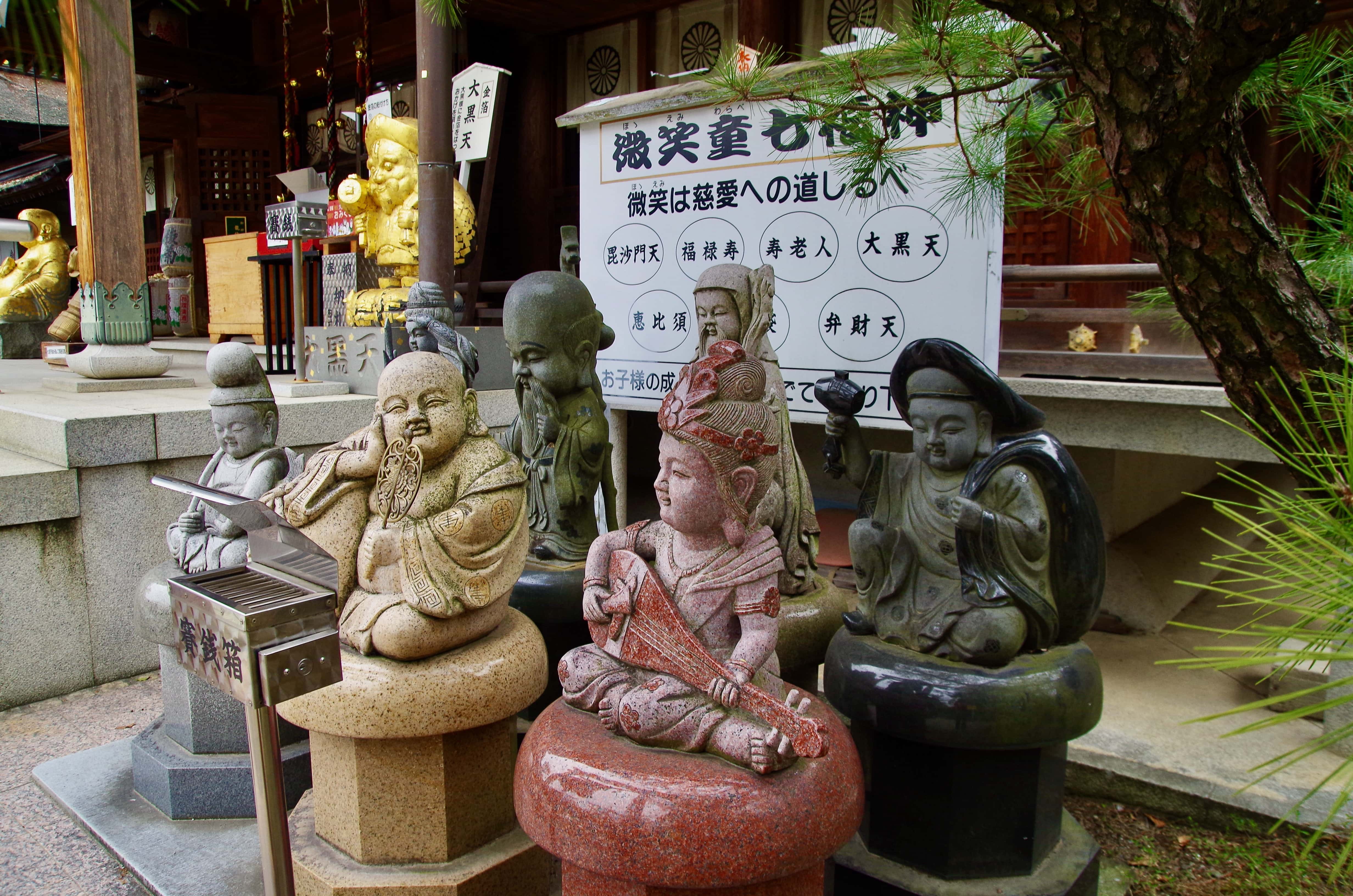 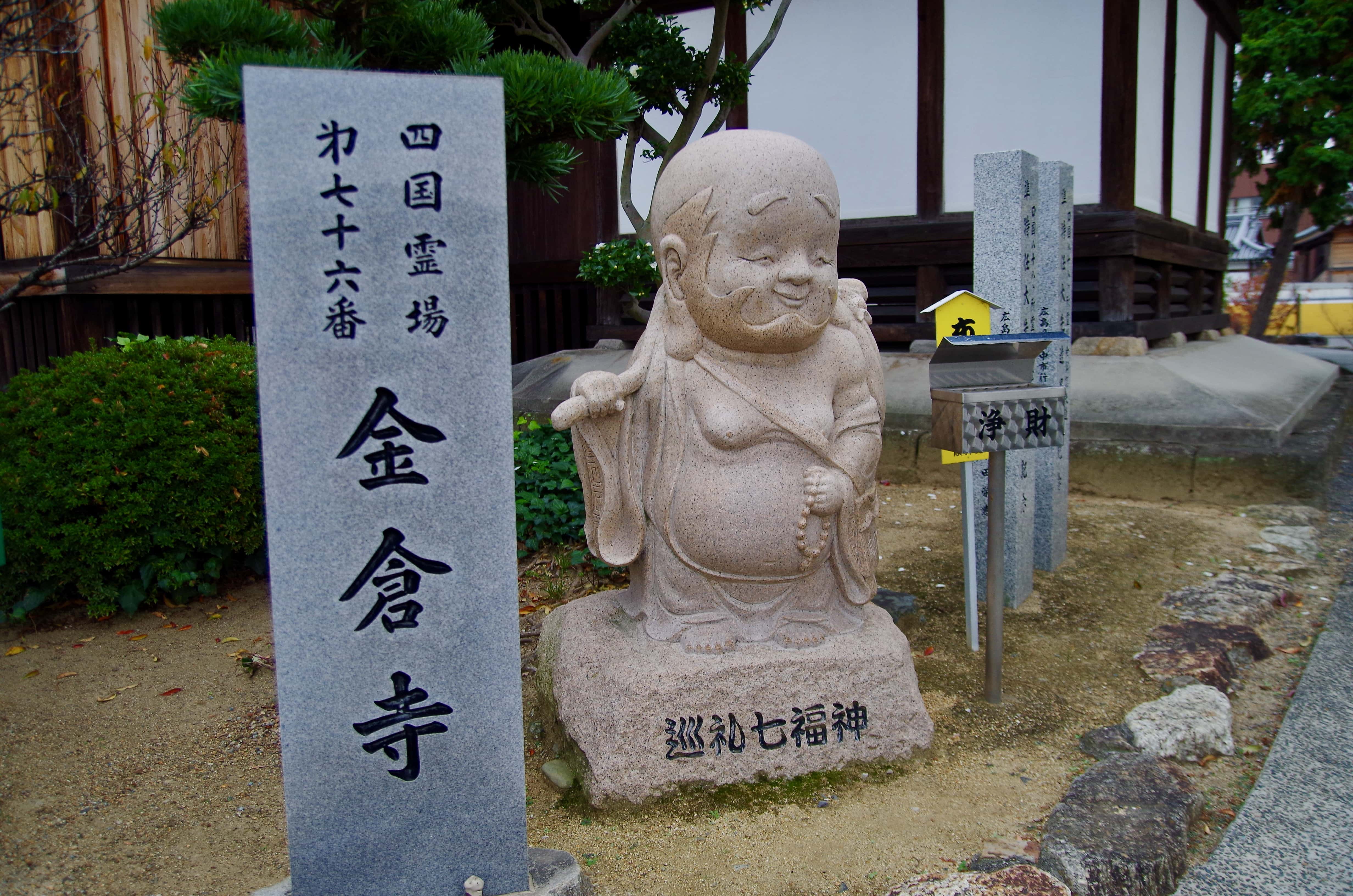 In Konzouji temple (金倉寺), the no. 76 temple of Shikoku Pilgrimage, worship Benzaiten from the “Seven Lucky Gods Nadebutu”, and also set the “Junrei Seven Lucky Gods” (巡禮七福神) where it is possible to pray the seven gods at once. 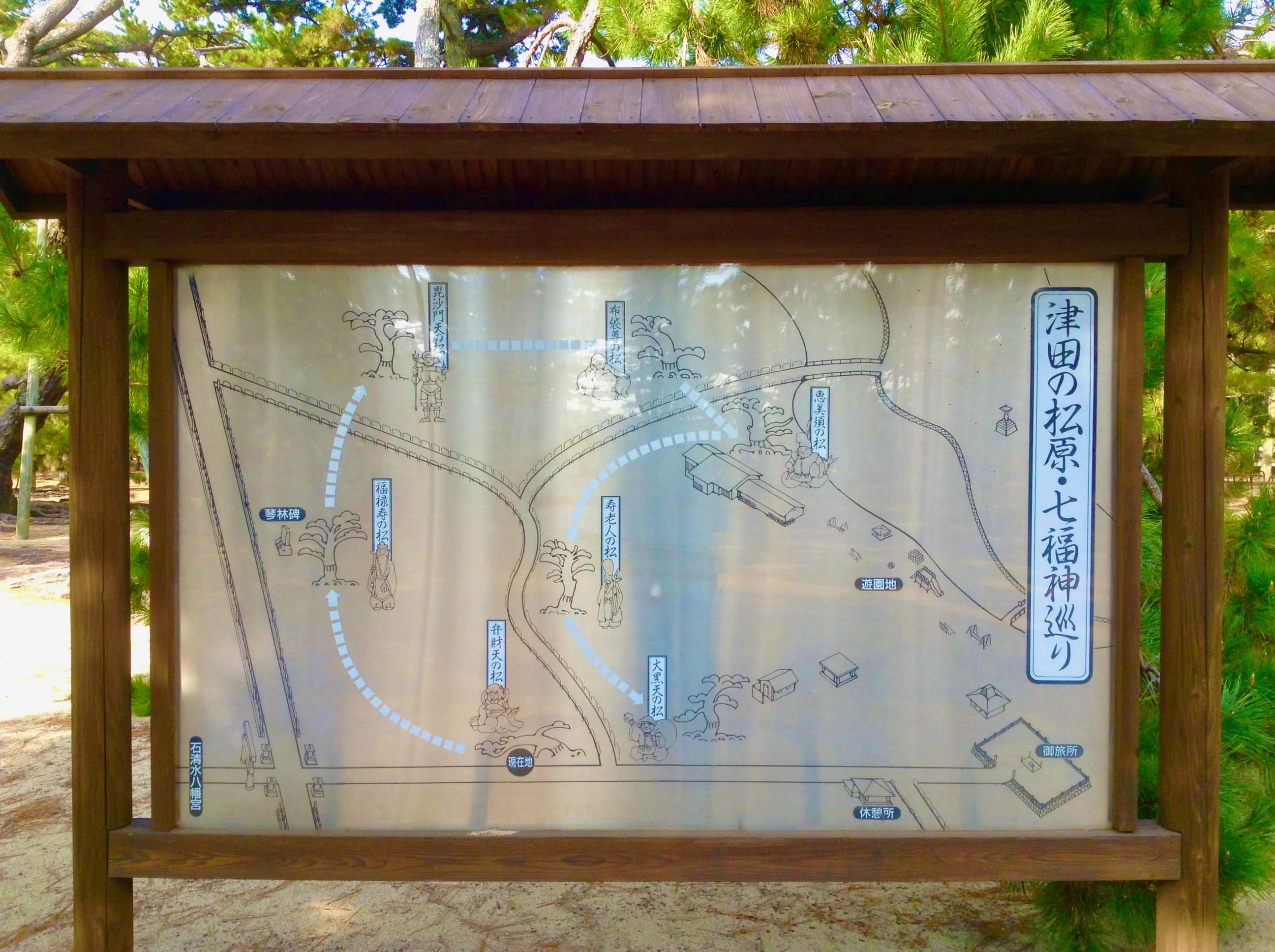 However, the very special one is the “Seven Lucky Gods Pines of Tsudanomatsubara” (津田松原) of the Kinrin park in the Higashi-Kagawa city. 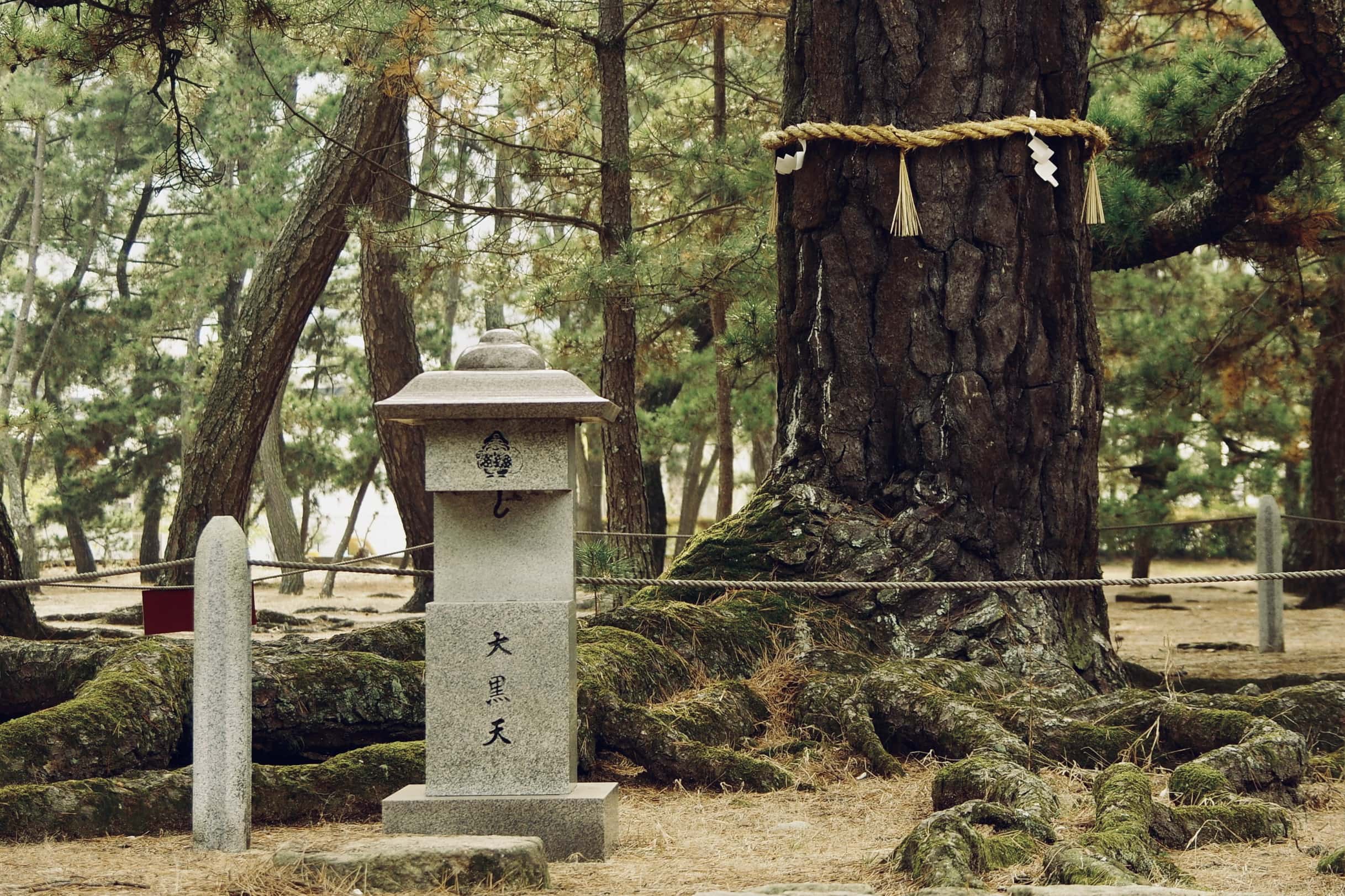 These seven pines worshipped as gods are averaged over 600 years. There are sacred straw ropes tied on the trees and stand beside them a monument carved with the god’s names it represents. It is really pleasant to find those majestic pines in a 10-hectare pine tree forest where the Setouchi Inland Sea echoes. 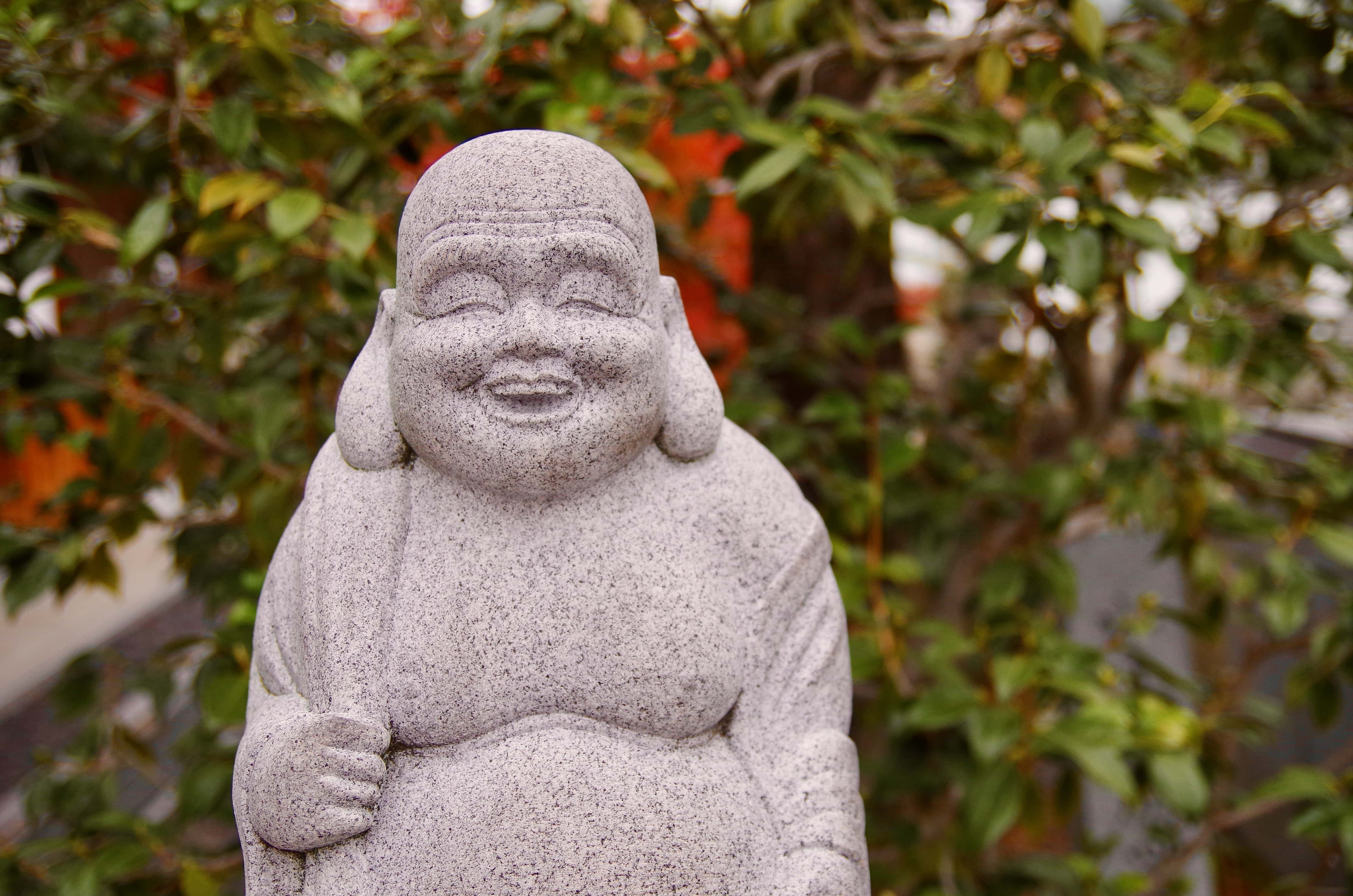 The Seven Lucky Gods are commonly worshipped in temples, rarely in shrines. When you encounter one of the Seven Lucky Gods in the temple, do not forget to join hands together and pray for the safety and blessing for your loved ones and yourself.