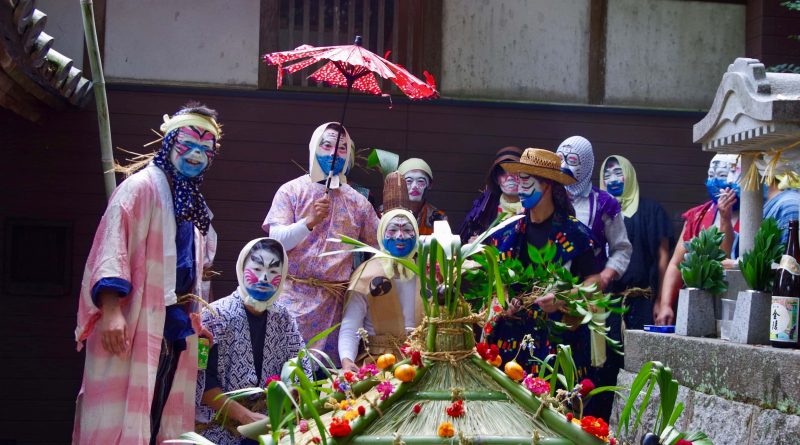 Late September, as the golden rice paddies are harvested the season of festival starts. All over Japan, the tradition is to carry mikoshi (sacred palanquin of god) around the shrine to celebrate and thank the gods for the harvest of the year.

Tsukahara Inari shrine, located at the Tsukahara village of Sanuki city Nakaocho in Kagawa prefecture, worships the Inari Okami (稻荷大神) who crossed the Setouchi Inland Sea from Bizen province (now Okayama prefecture) 400 years ago. In Japanese, “稻”means “rice” and“荷” have one of the meaning of “carrying on one’s back”, so“稻荷”in this case means “to carry on one’s back rice”. It is easily understandable that here is worshiped gods related to agriculture. 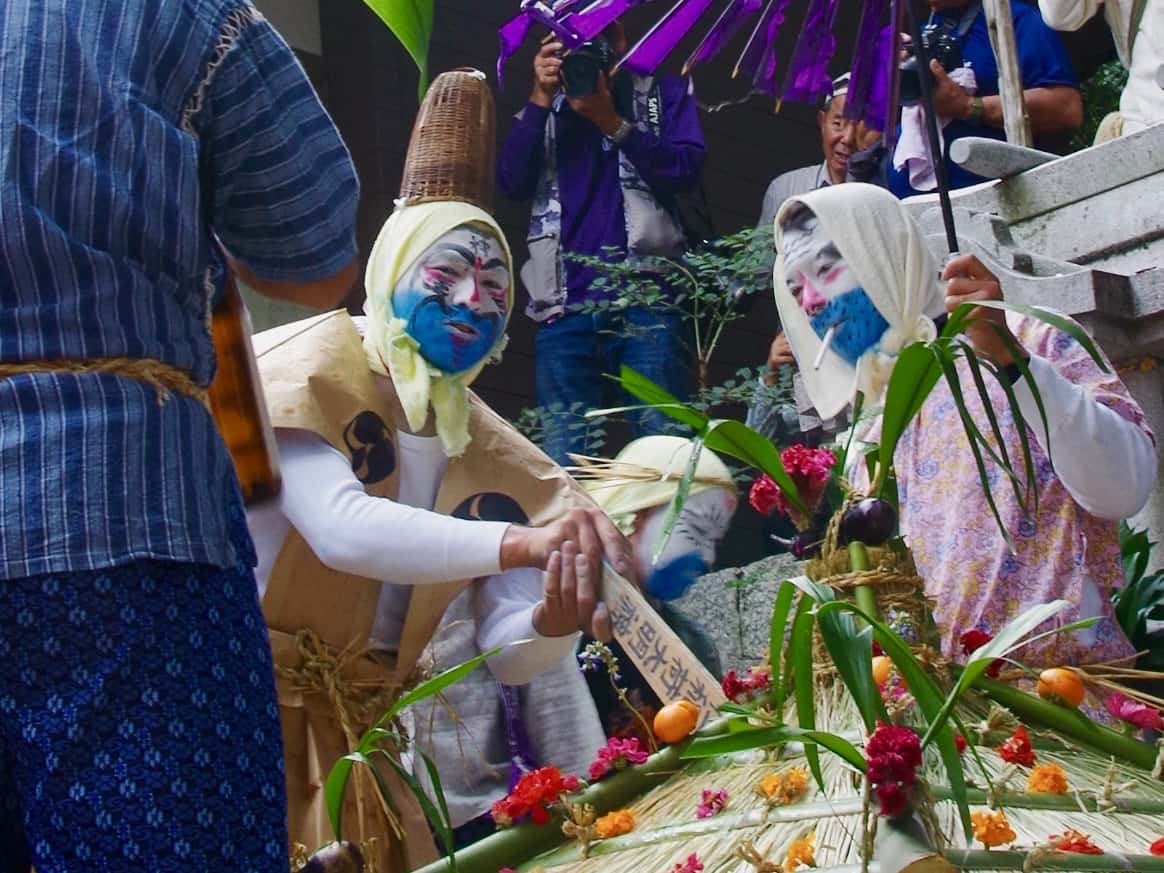 Every October everywhere in Japan festivals are hold to celebrate the harvest, and Tsukahara Inari shrine is not an exception. However here the festival does not only owned a beautiful golden mikoshi called Hon-Mikoshi (本神輿 also meaning real mikoshi), it also got one made from bamboo and leaves, vegetables and fruits, the Abare-mikoshi (暴れ神輿, meaning the rebellious mikoshi). It says that the tradition is no less than a century hold one! 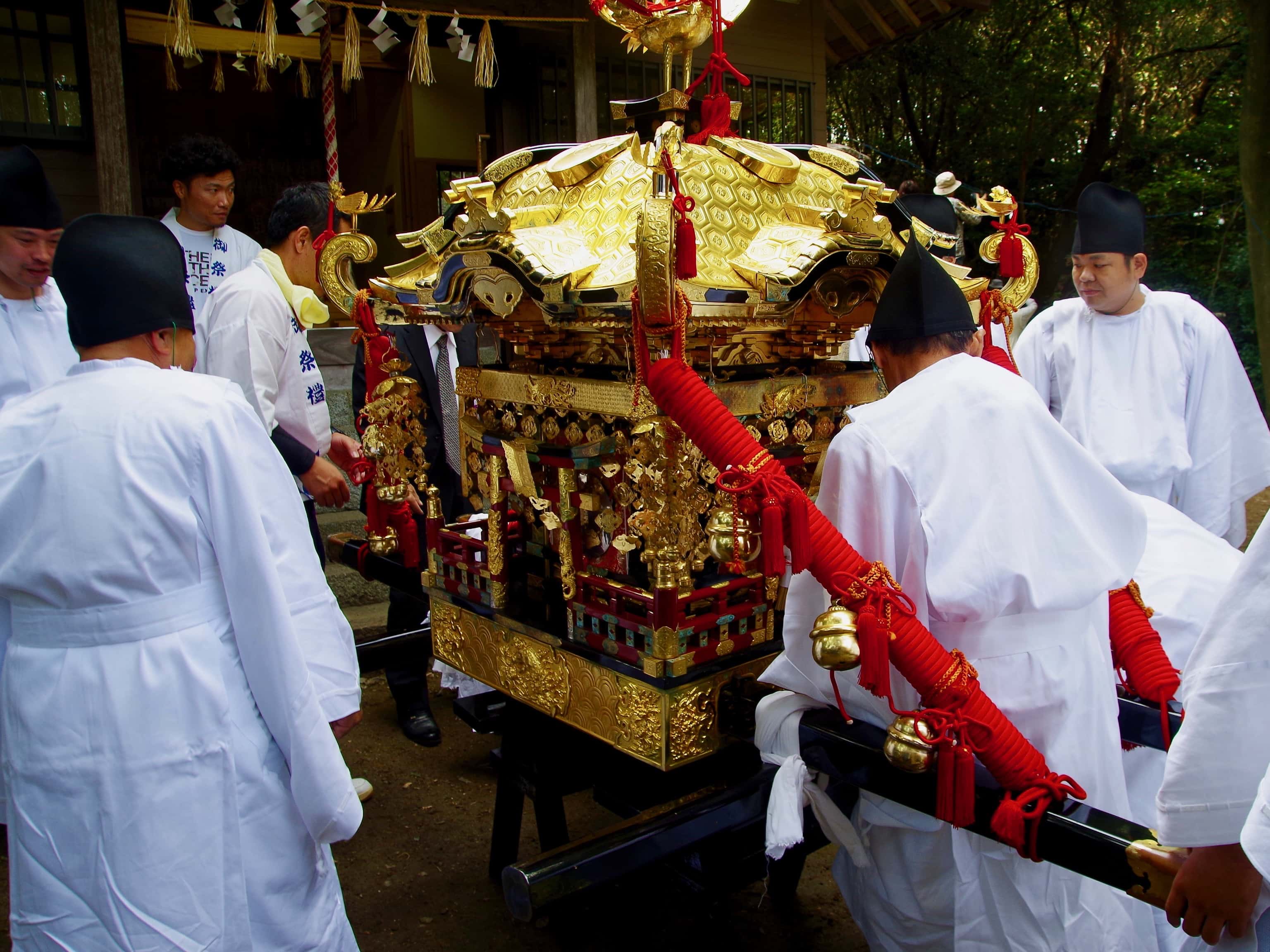 The Shinto priests are in charge of the hon-mikoshi, which is related directly to the shrine, while the abare-mikoshi is carried by young people wearing ragged farming clothes and whose faces are boldly painted with ink and pigments.

The story says that this unique idea was from young men who wanted to carry the mikoshi but did not have the qualifications for. As they did not have a mikoshi, they made their own one creating the structure with wooden sticks and bamboo, adding straw on the roof to make it looked like a real one. Their colorful makeup is inspired from the one of the farmers’ characters in Kabuki which was performed during the slack season of agriculture. Presently, there are two elders who do the makeup for the young men using old pictures as reference. 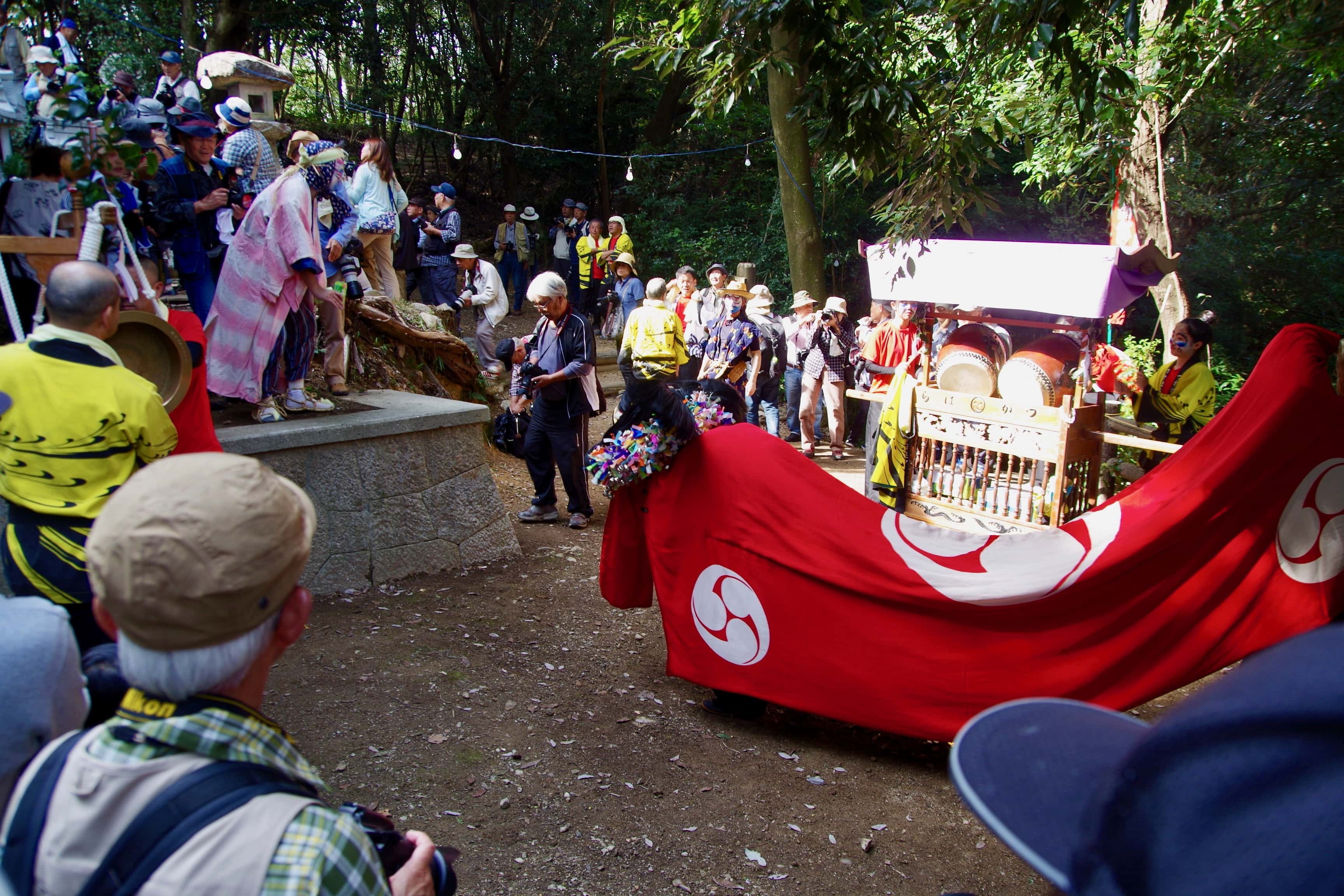 At 2 p.m., the Sanuki lion dance’s gongs resonate lively announcing the beginning of the matsuri. 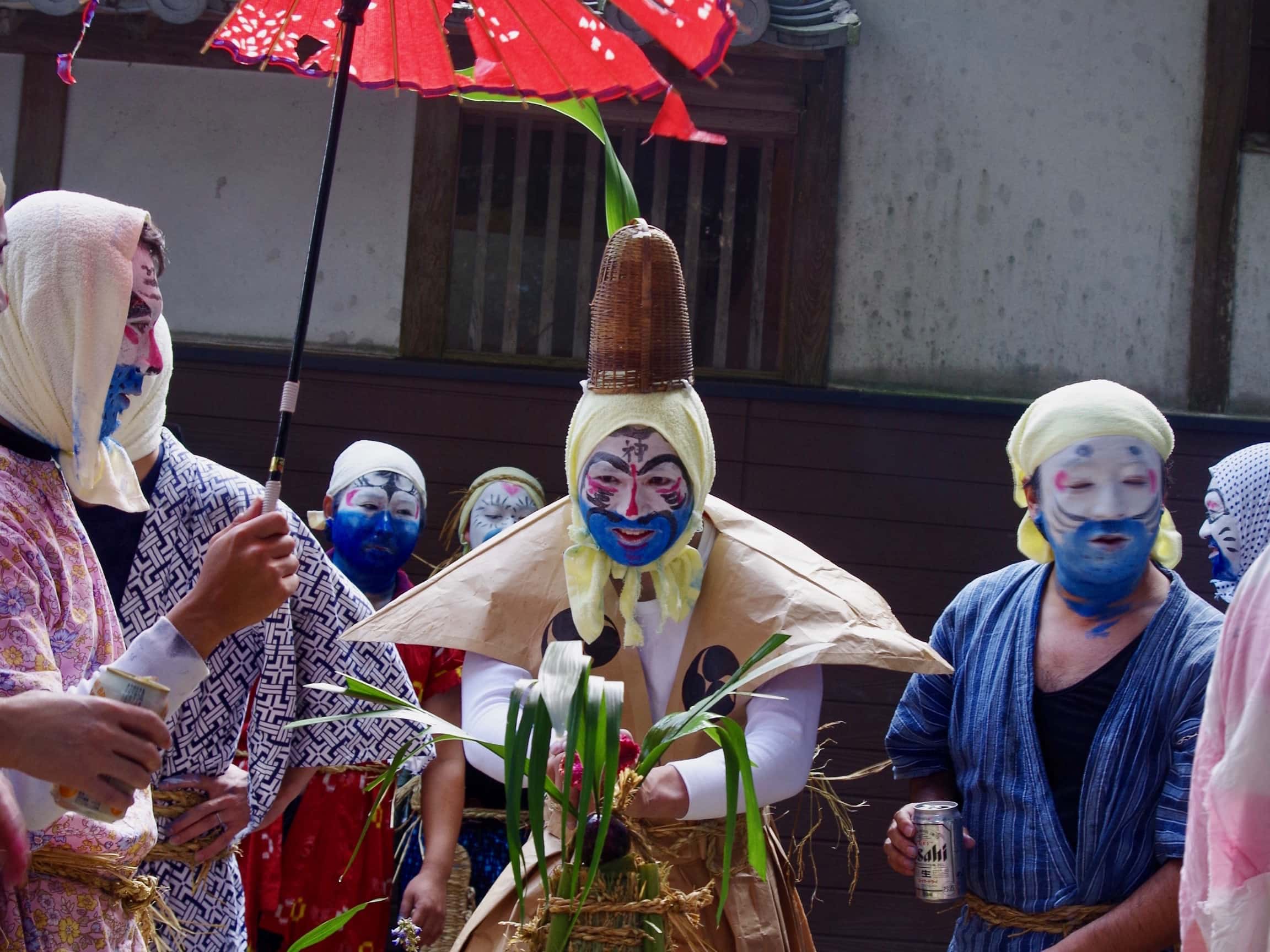 The young people in charge of carrying the abare-mikoshi will quickly gather and get their makeup done. Then they will spray alcohol on their mikoshi to repulse bad-luck and calamities. However, the alcohol is rather spit out than sprayed from cans or bottles. And as it done, the ones with low alcohol tolerance end up drunk before the start of festival. 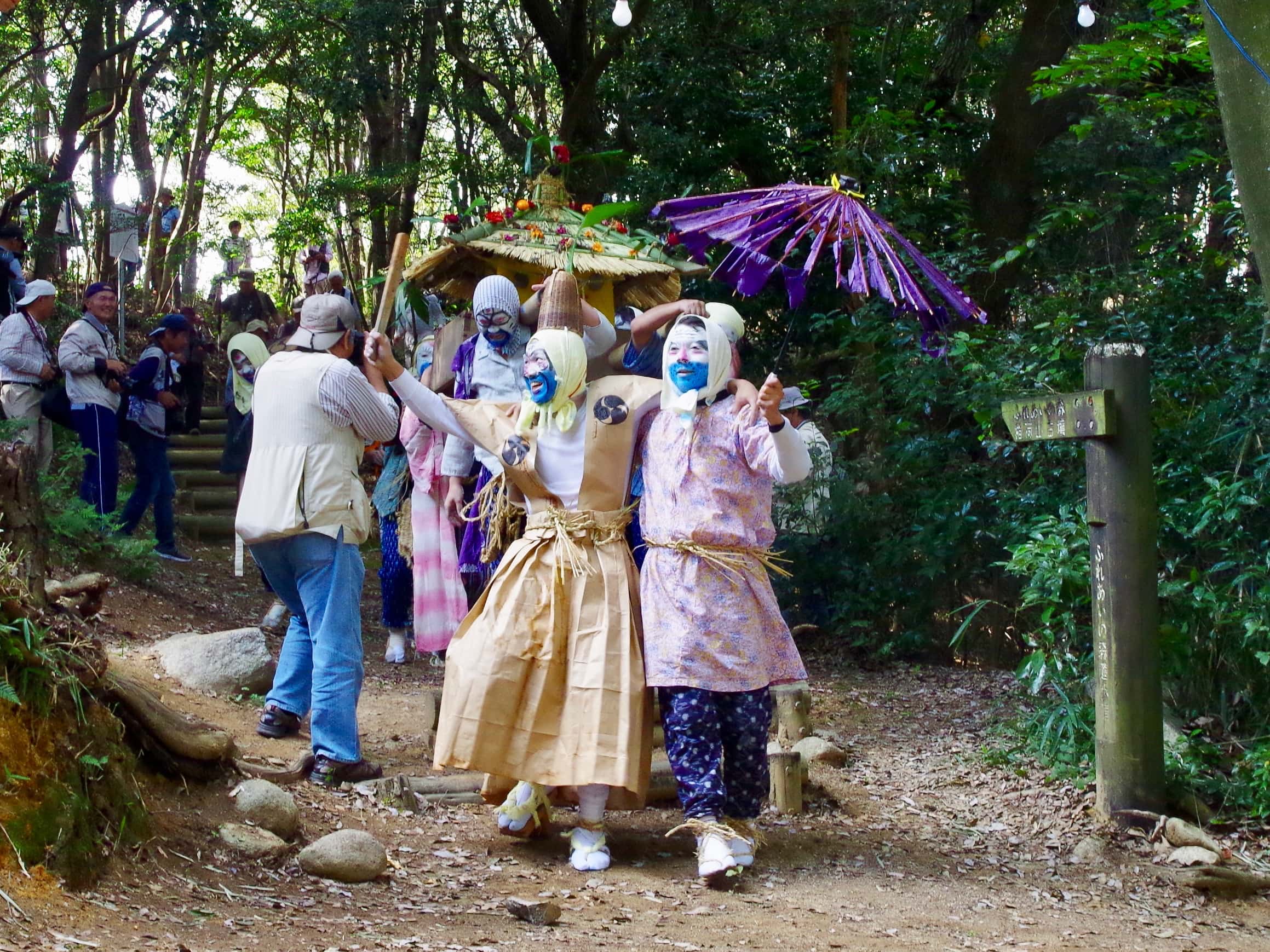 After a while, the tipsy joyfull men enveloped by the alcohol scent unstably carry the abare-mikoshi , while they shout “a~mottainai mottainai(あ～もったいない、もったいない, meaning “What a waste!”)”, visiting the sacred mountain behind the shrine before coming back. What a wild and crazy atmosphere! 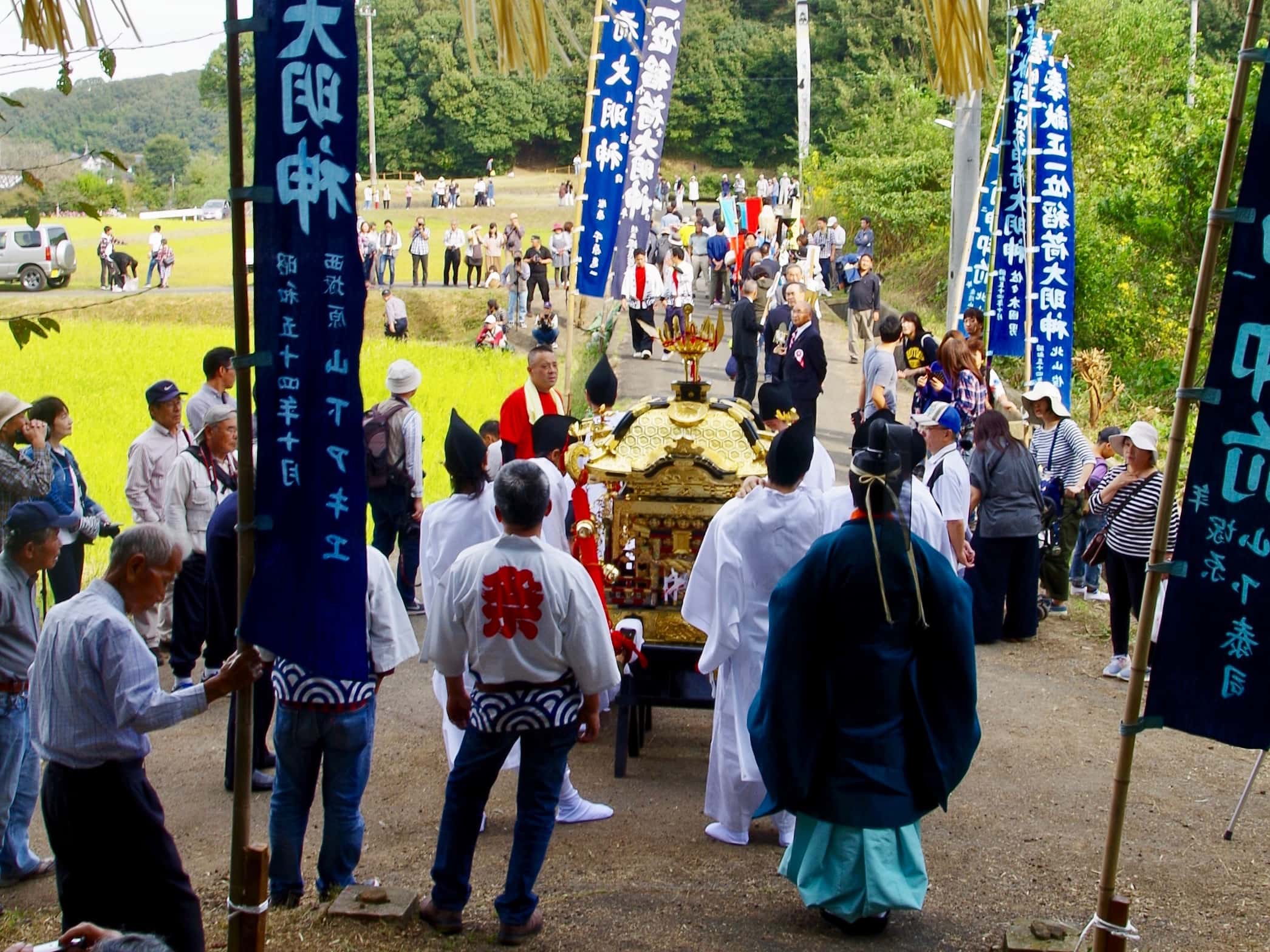 At the same time, the hon-mikoshi is departing to go around the pond in front of the shrine. 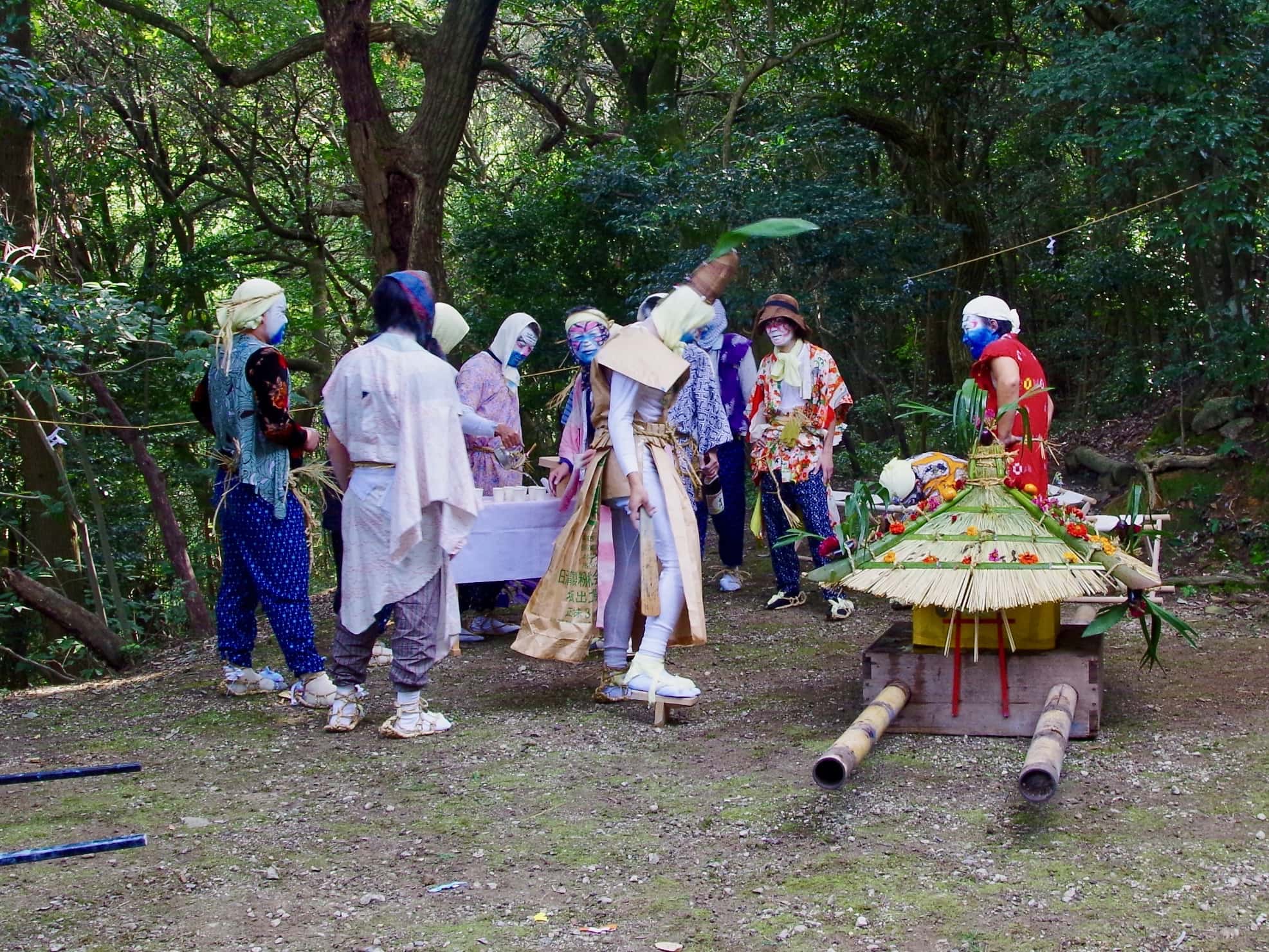 The abare-mikoshi goes down the mountain while its crazy people still drink and spit alcohol out. Then they reach the hon-mikoshi and the two mikoshi, as if an invisible rope linked them, go around together. The distance between them shrinking or expending at some point, but never should the abare-mikoshi be ahead of the hon-mikoshi.

After the seesaw game, the festival reaches its climax. 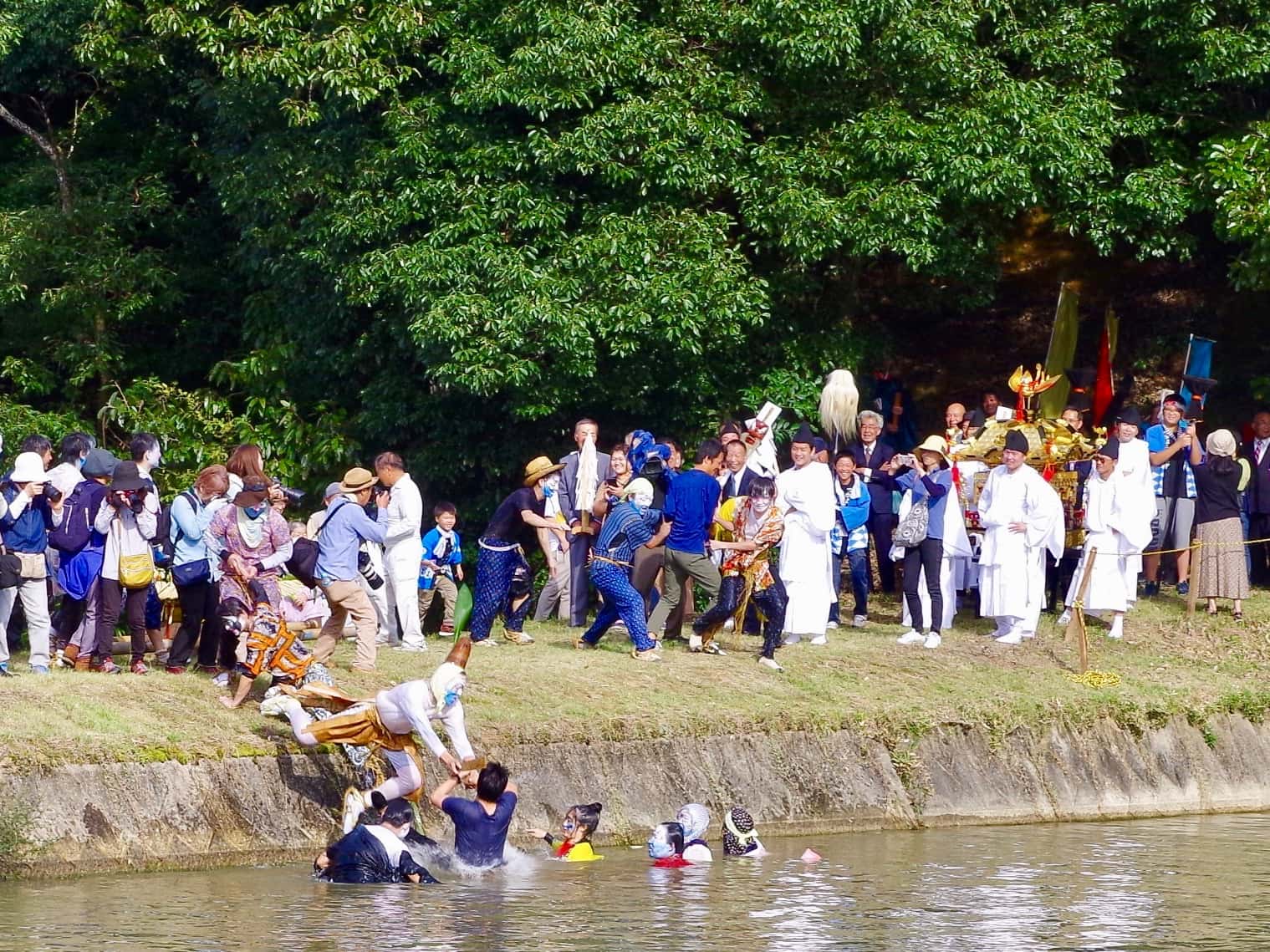 The hon-mikoshi proceeds to the other side of the pond and faces to the abare mikoshi. At that moment, the young men put down the abare-mikoshi and suddenly start pushing partners and visitors into the pond. Only the priests who carry the hon-mikoshi are saved-up. 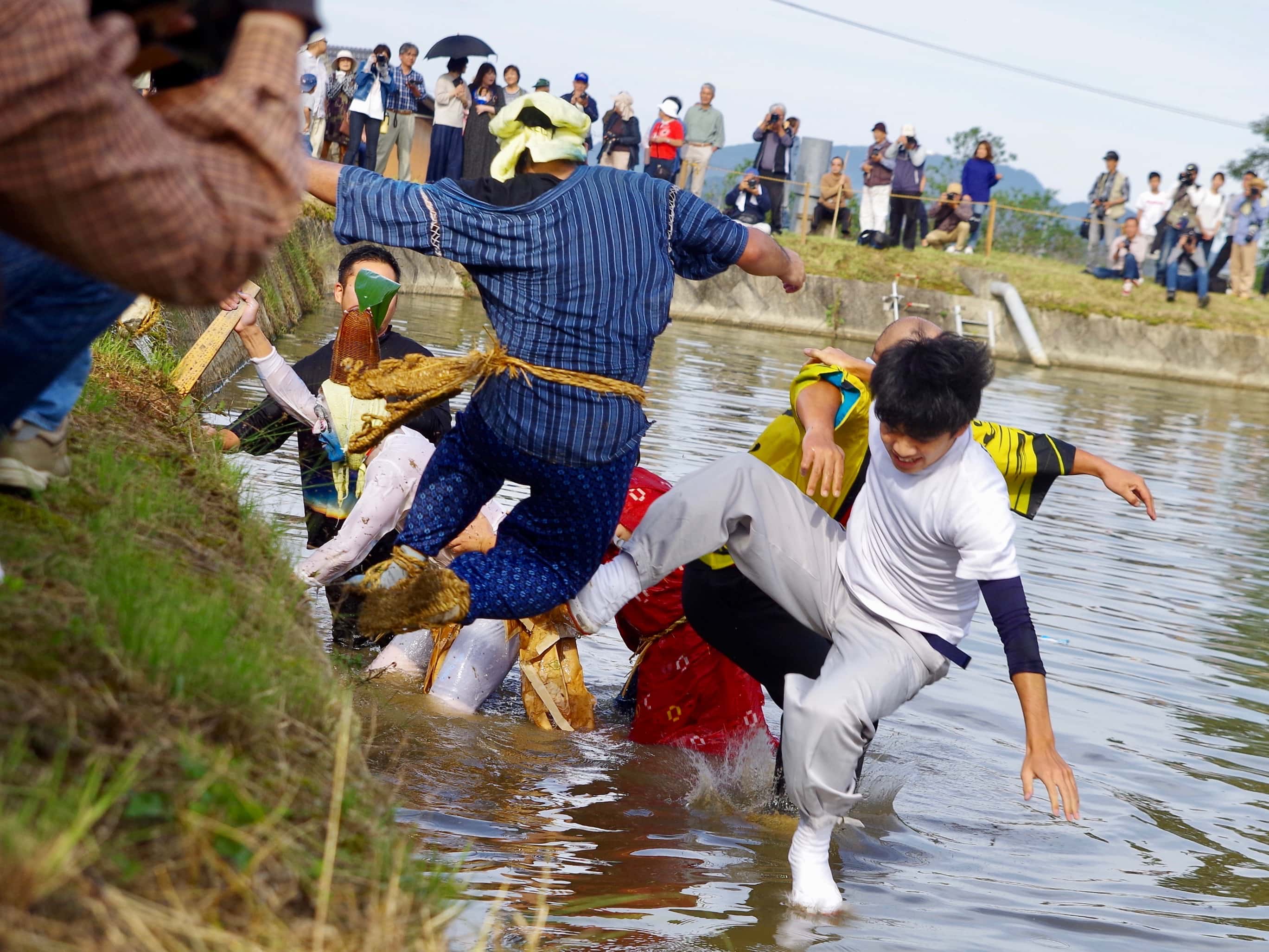 The chase between locals and visitors is one of the main point of this event. And even if it is really embarrassing to be pushed down into the pond, people believe that it will protect you against any disease the whole year. Actually, lots of people choose to jump into the pond by themselves without waiting to be pushed. 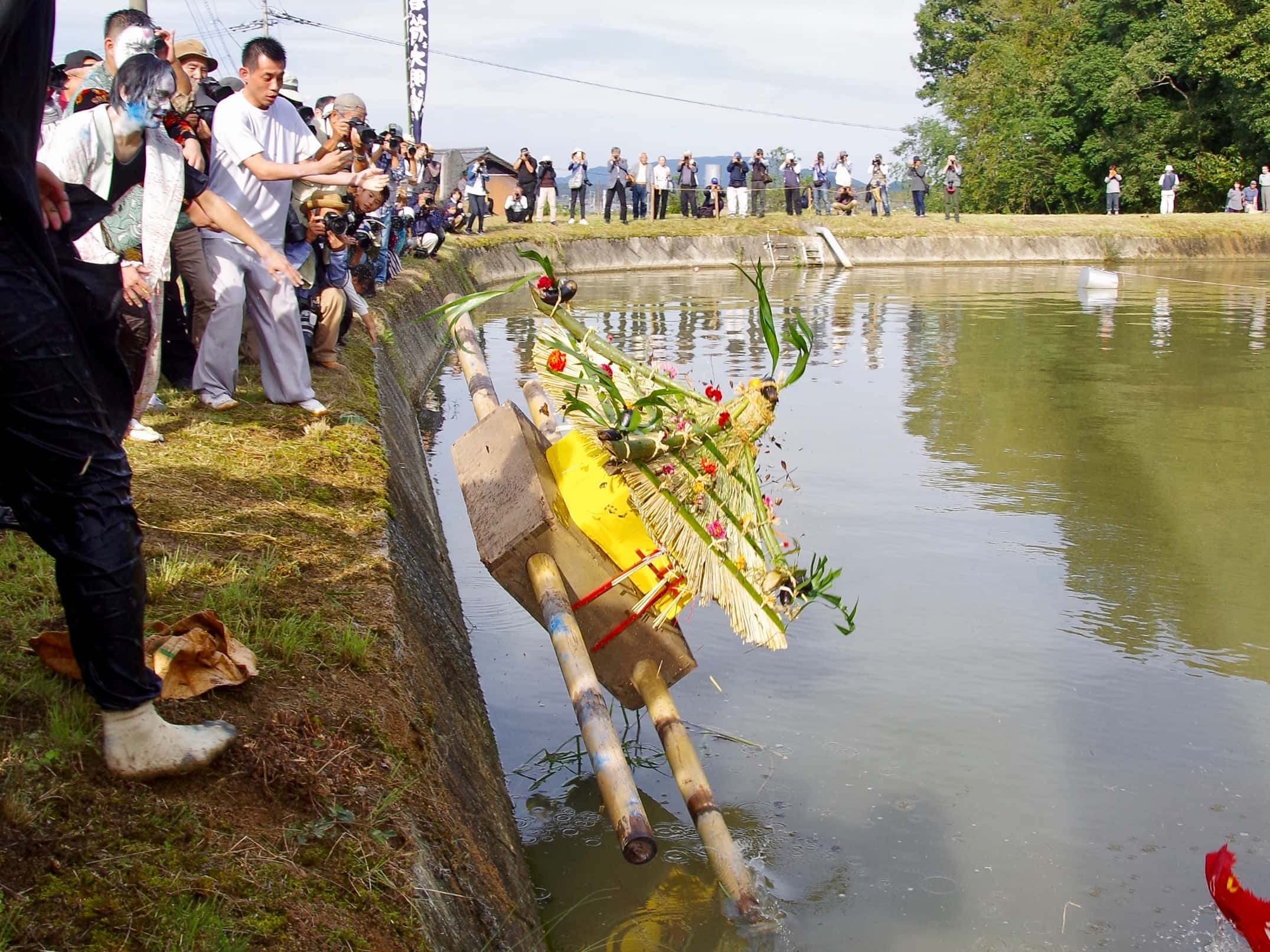 Once the abare-mikoshi has been pushed into the pond, the festival is coming to an end. At last, people pull out from the pond the abare-mikoshi and the ones still inside, before heading back to the shrine following the hon-mikoshi. 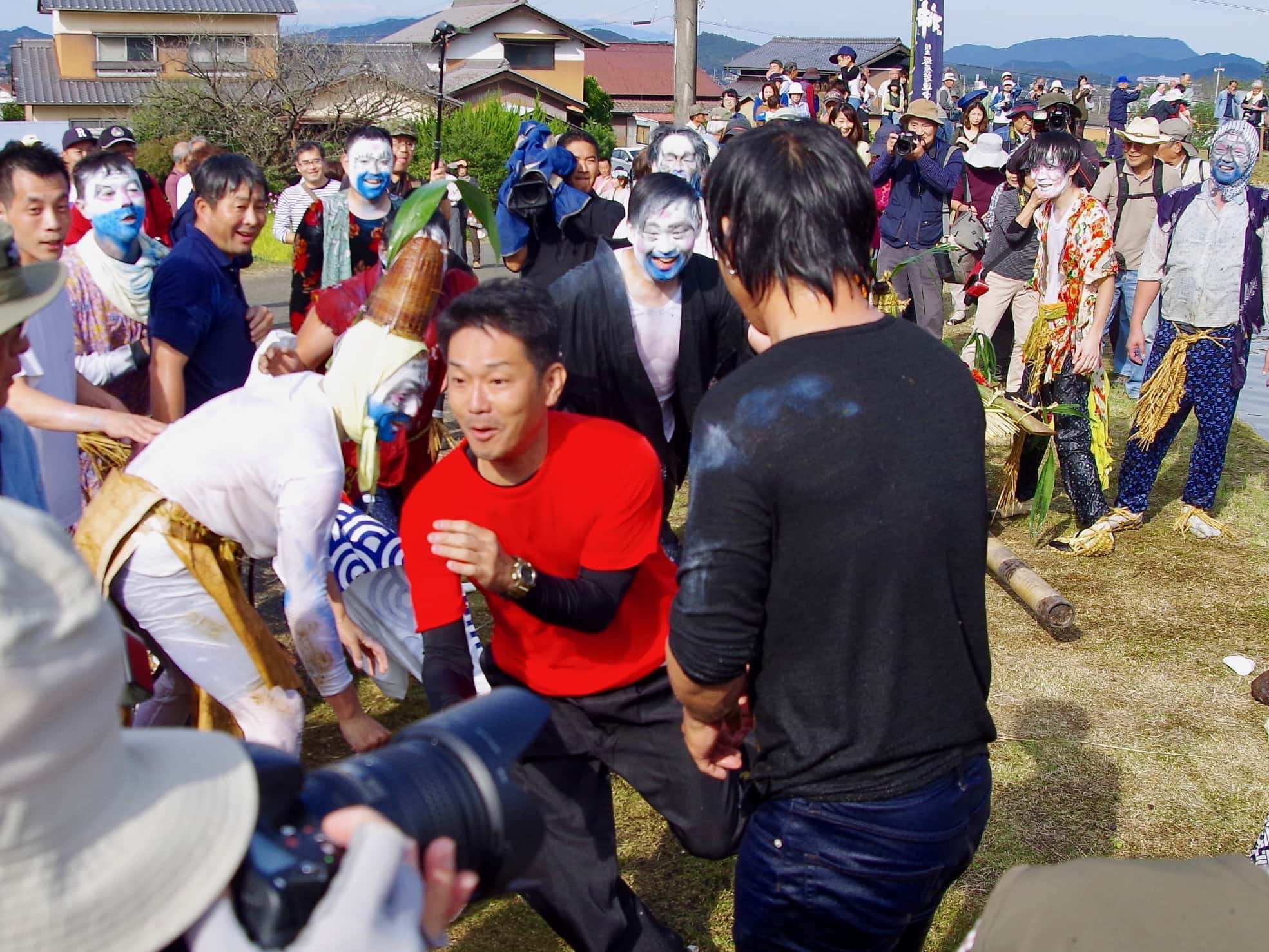 This crazy festival special costumes and makeups are really eye-catching; however, chasing and pushing people into a pond is definitely a feature that can only be seen here. Some ones feel embarrassed, some ones are chased, and some ones are suddenly driven into the pond. Anyway, you can hear scream and laugh in the venue while people are pushed into the pond. 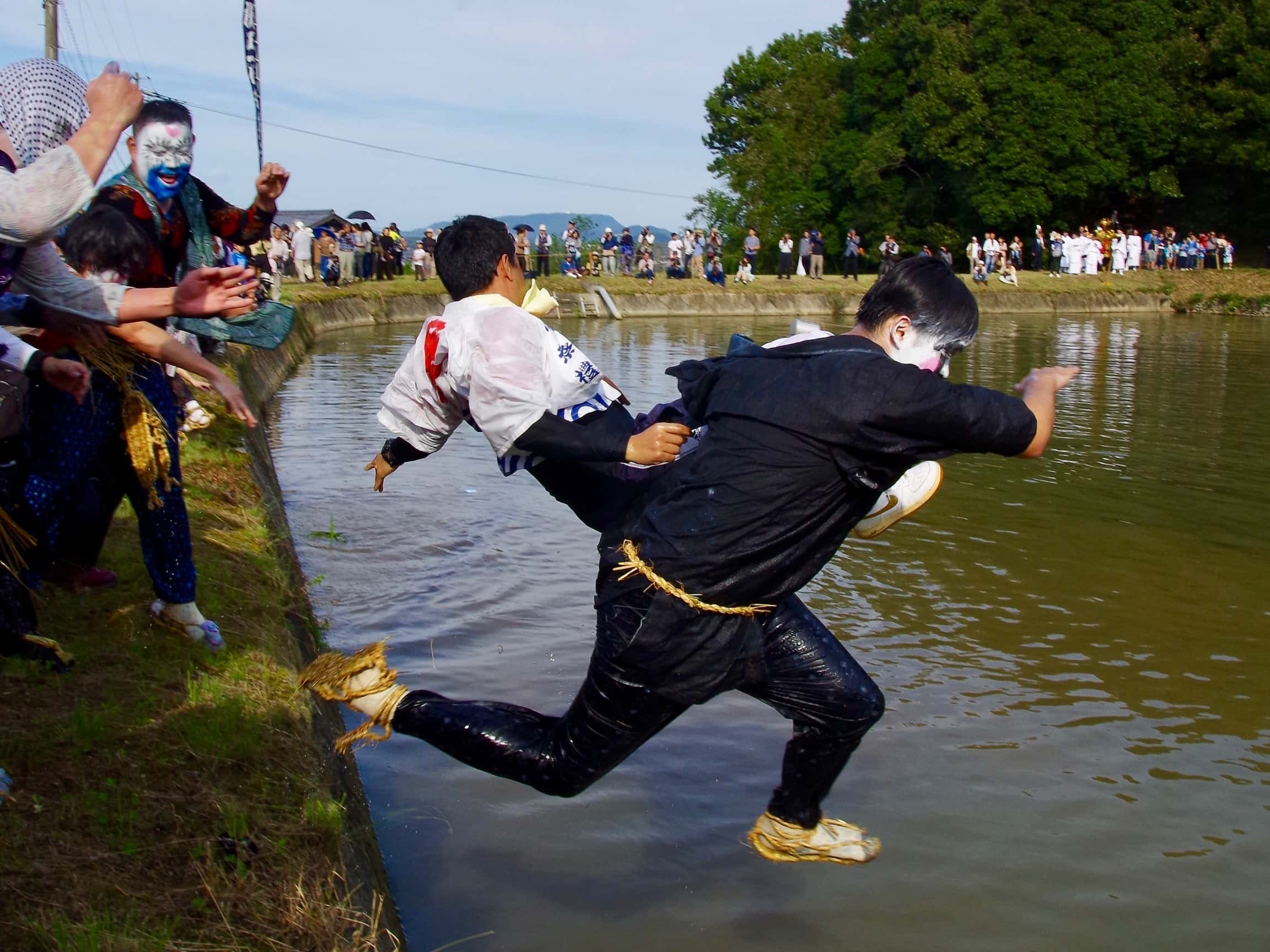 If you have already been to some solemn festivals in Japan, come here to experience an exciting and intense crazy festival. And if no one pushes you into the pond, just jump with everyone into it!