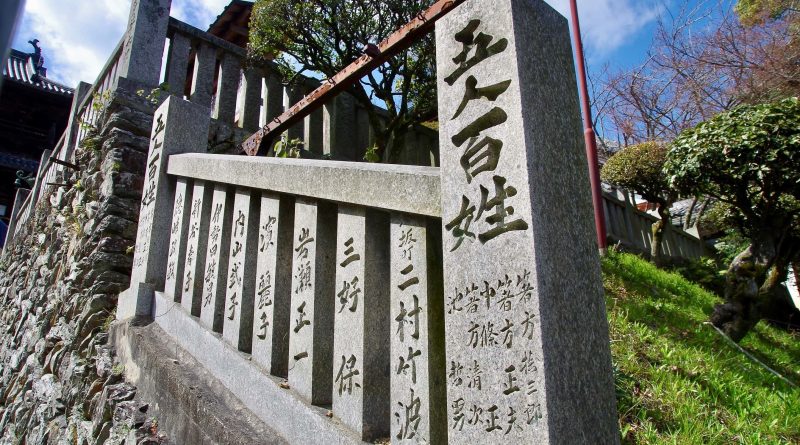 After you climb the 365 stone stairs of the approach of Kotohira, there will be no shop or vendor. From the gate of the Konpira shrine the place is sacred and all business has been prohibited in this enclosure. 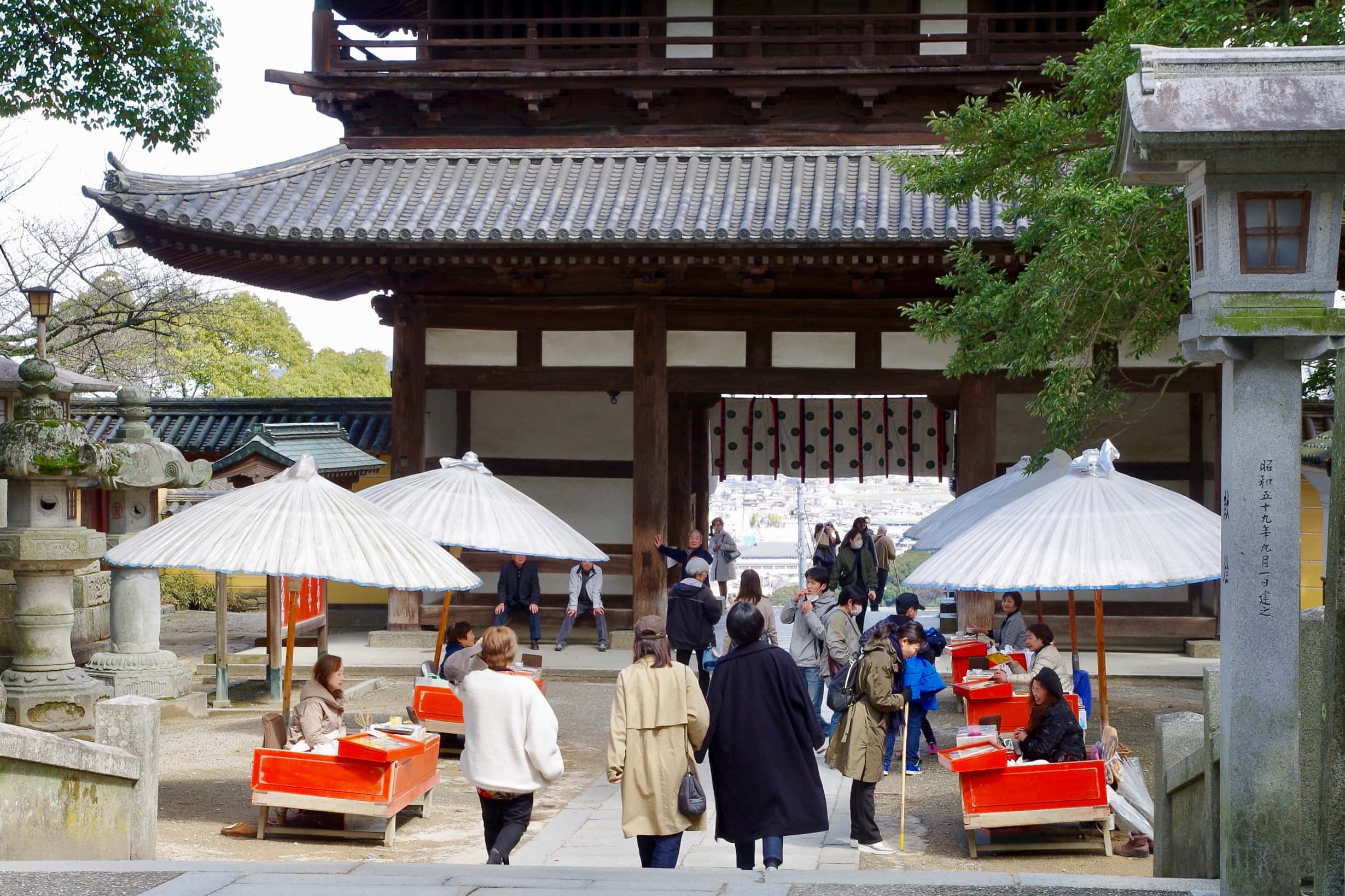 However, once you pass through the gate you will see five white parasols where the famous product named Kamiyoame is sold. These five vendors with white parasols, named Gonin Byakusho (Five Farmers), are the only one allowed to do business in the field of Konpira shrine due to their special identity. 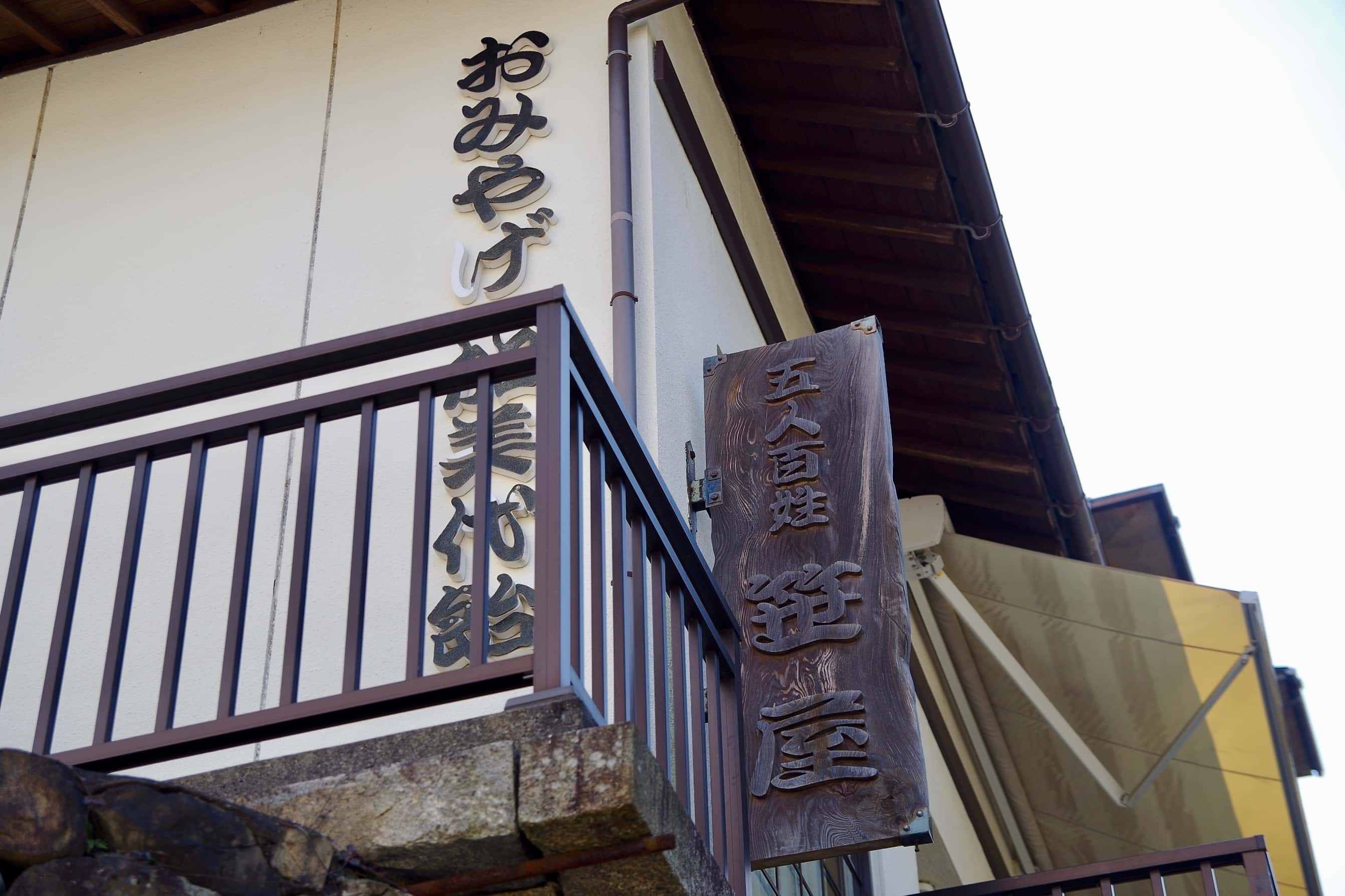 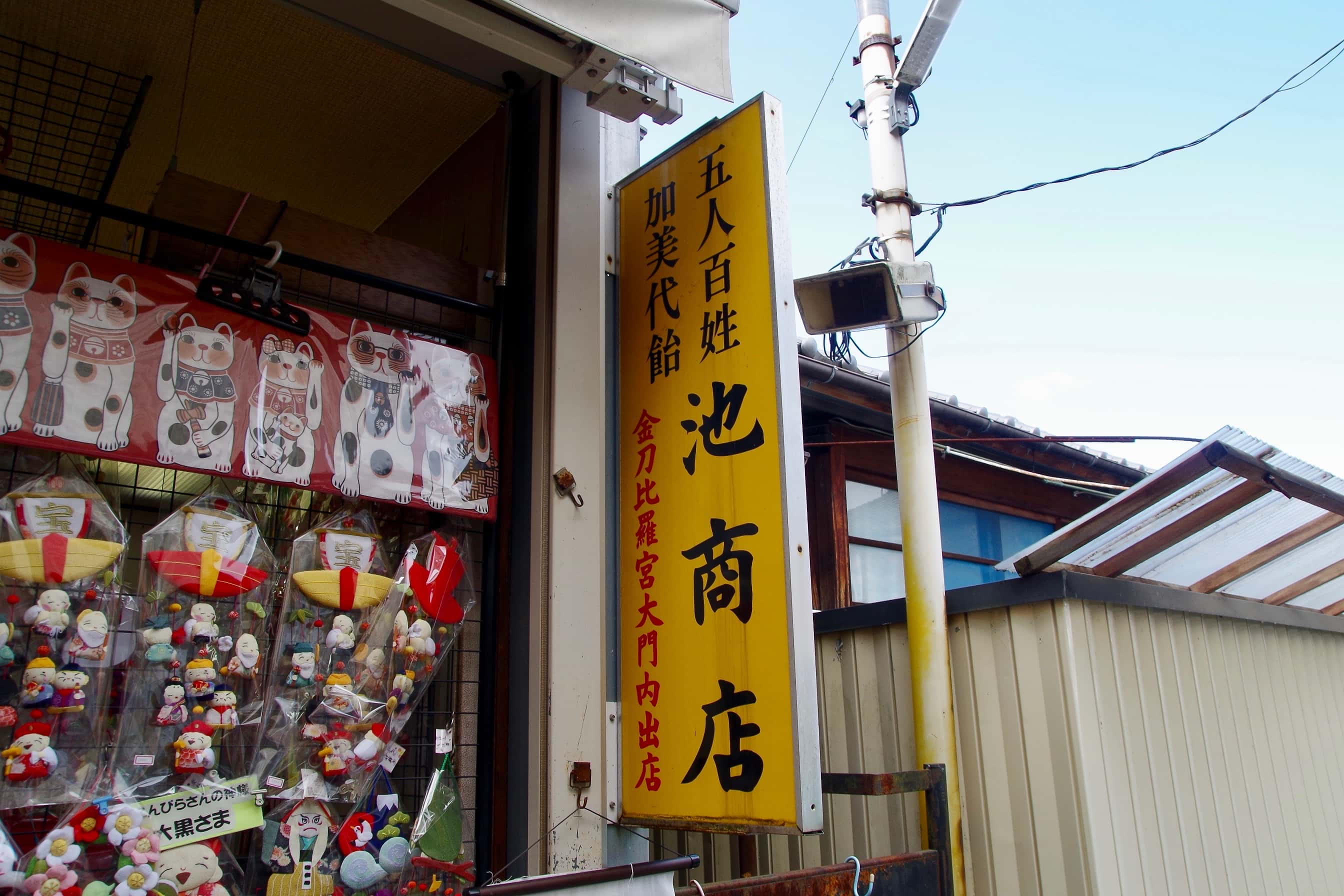 Even now every New Year’s eve, each family of Gonin Byakusho who assign one man wearing kamishimo (Japanese old ceremonial dress) serves the good fortune meal made with kombu, squid, and salted Japanese plums to the chief priest of shrine and to the people participating to the ritual.

During the regular festival in October, the Gonin Byakusho have also to prepare the “Kagami mochi” (round rice cake) for the decoration and the amazake (sweet drink made from fermented rice) for worship. Moreover, since August, they had to take care of the two boys and the two girls, selected to be the “Otoninsan” and lead the parade line during the festival. 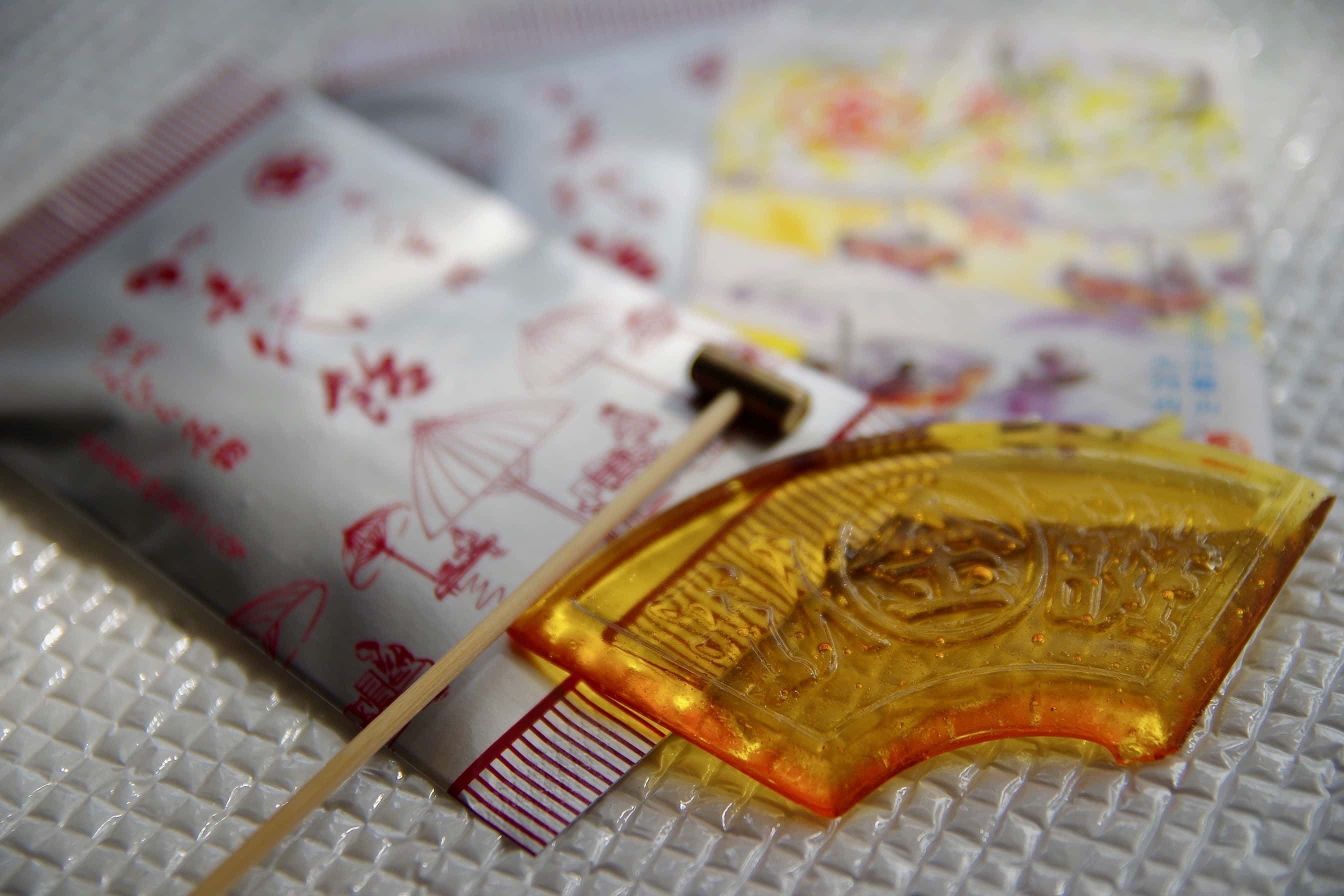 Kamiyoame, sold by Gonin Byakusho, has not only a golden package but the candy inside is also glimmering with golden colours which represents the Konpira shrine. The actual wet proof package started from the middle of the Showa period, before the package for the Kamiyoame was made from bamboo tied with straw.

As time passed, there are some changes in the Kamiyoame’s ingredients. In the old days, Kamiyoame was made from rice worshiped at the shrine but nowadays they mixed sugar, maltose, and yuzu oil which brings light citrus flavor to the candy.

It is interesting to see people who will eat Kamiyoame to smash it beforehand with the hammer attached to the package. It is said that the believers who buy the Kamiyoame can bring it far away with them and share the good fortune with their family and friends. 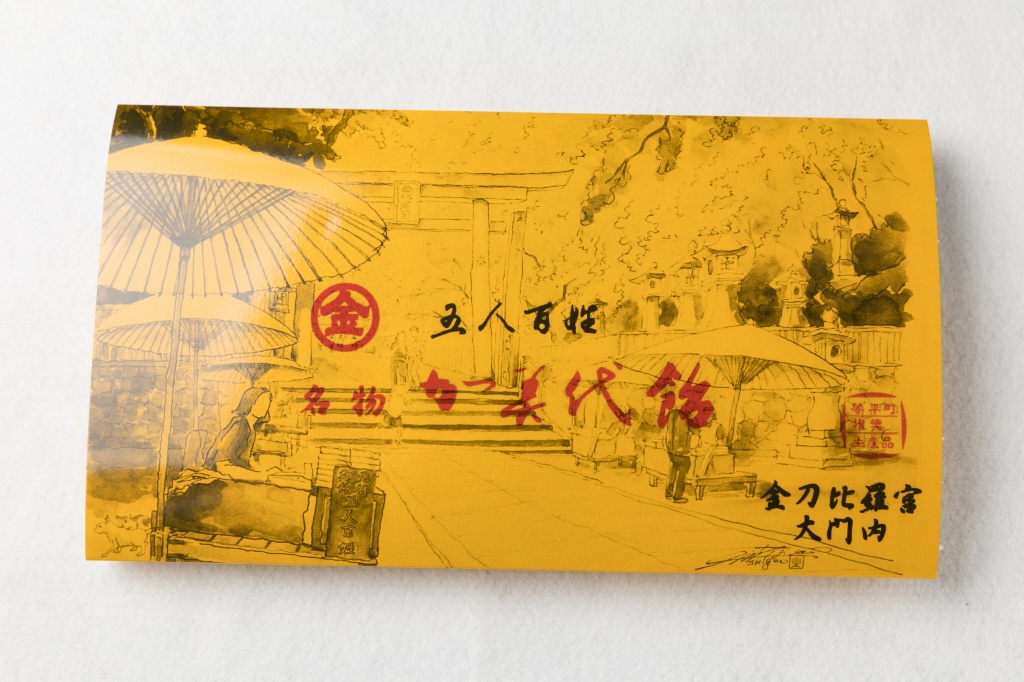 If Kamiyoame was a one-mouth size design candy, there is high chance people will eat it on the spot. However, the genuine size of the Kamiyoame push people to smash it with the hammer in order to bring it home. So do not forget to buy some traditional candy at a Gonin Byakusho shop for your family and friend, for sure they will be inspired to visit Konpira shrine themselves if you tell them the story of Kamiyoame.

By the way, the character “金刀比羅宮 大門內” written on the package’s bottom-right corner is the evidence you visited the Konpira shrine, and by your pack of candy within the shrine area.

If youare too late to buy the Kamiyoame in the shrine’s enclosure before 5 p.m., you can still find the shop written “五人百姓”(Gonin Byakusho) beside the approach. Buy a pack of Kayomiame and bring the good fortune of Konpira shrine to your home.