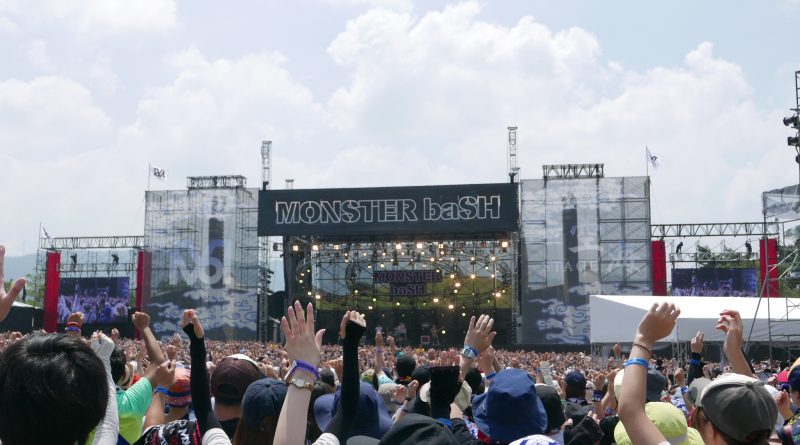 When music fans are asked the question ‘what are your must-go events during summer?’, you can be sure they will bring up  summer music festivals. There are the three major summer festivals which every music lover knows about. Fuji Rock at Naeba Ski Resort in Niigata, Summer Sonic held in two venues, Chiba and Osaka, and Rock in Japan, in Ibaraki. The announcement of the artist line-up is enough to cause a ruckus not only in Japan but overseas. It’s not unusual to hear people from overseas say ‘I really want to take a holiday and go to the festival!’

However, these three music festivals in the main land are not all you get. There is another interesting and large-scale music festival: MONSTER baSH is the largest outdoor music festival in Chugoku and Shikoku. It started in 2000,  like Summer Sonic and Rock in Japan, and the attendance number surpassed 500,000 by 2015.

MONSTER baSH, known as monbasu among locals, moved venues to Sanuki Mannou National Government Park. It is surrounded by peaceful and abundant nature, making it a different experience from other music festivals. The venue of Fuji Rock is also located in a natural setting, but the higher number of stages makes it more of a challenge to walk between distant stages. One of the features of MONSTER baSH is the two adjacent stages named Kūkai and Ryūjin, played in turn – this means you can enjoy all performances without getting tired from travelling between two stages.

You can take the shuttle bus from some main stations (JR Takamatsu station, Kotoden Okada station, Kotoden Kotohira station) to the venue. There are also temporary trains services operating on the Kotoden railway line. It takes a little over an hour from Takamatsu city centre to the festival venue. 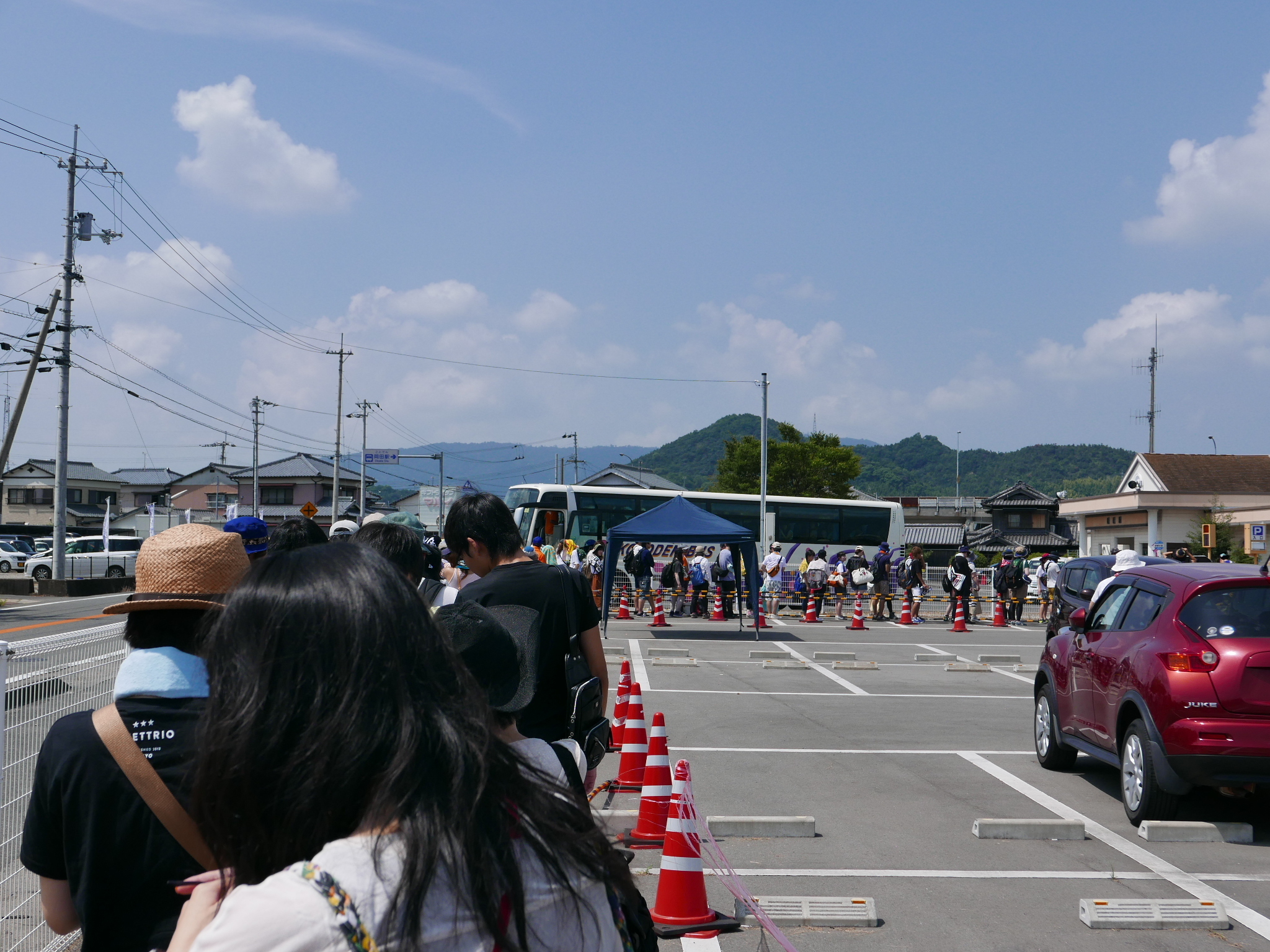 When I stepped out of Okada station, I could see the excitement of music fans queuing for the bus. Fortunately, I didn’t have to wait too long under blazing sunlight as the shuttle buses came and left one after another. 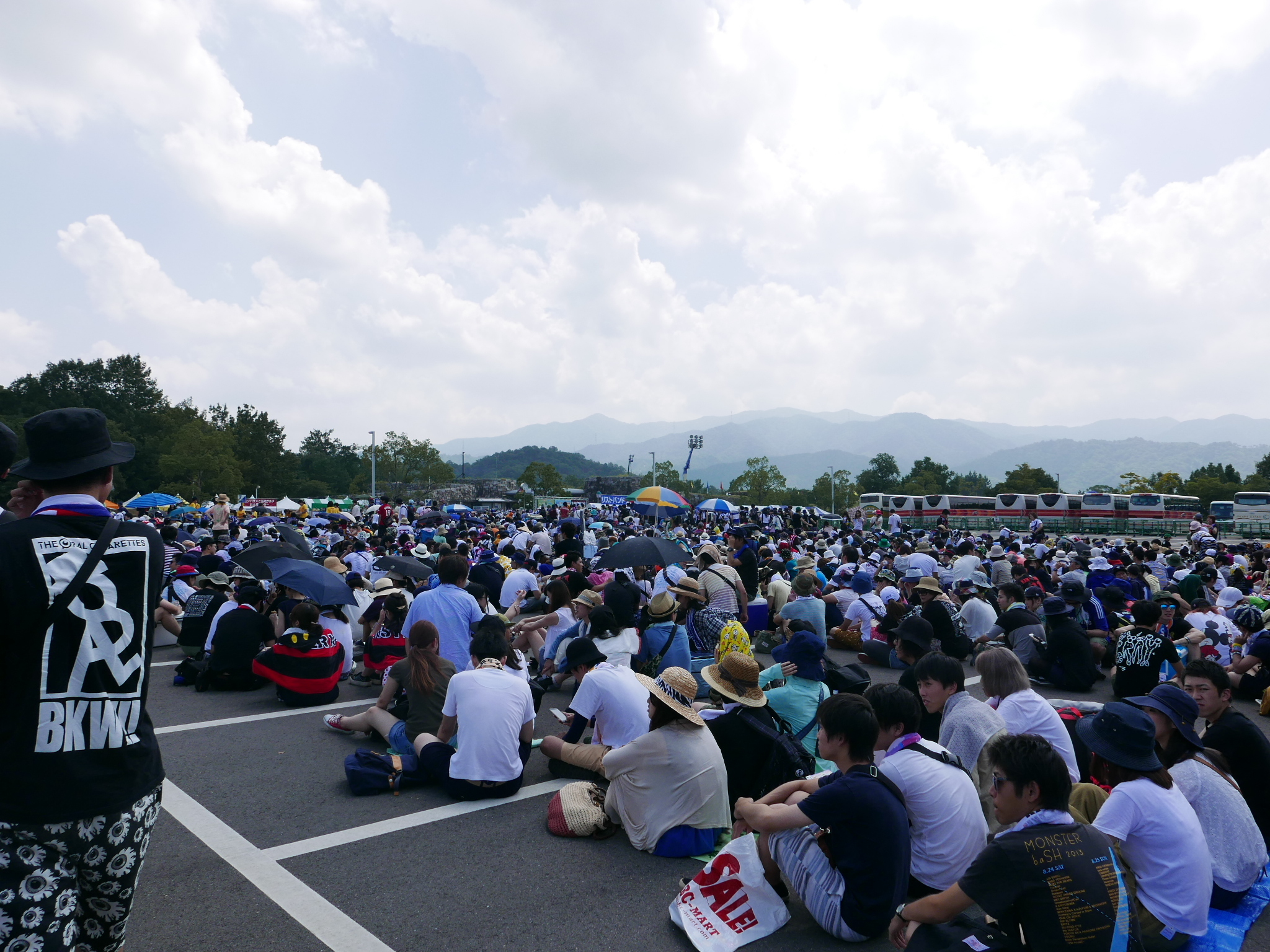 When I got off the bus, the site was packed with people. I followed the staff and I finally realized the people were queuing to exchange the ticket for a wristband. I waited for 20 minutes, it was longer than the waiting time of the shuttle bus. 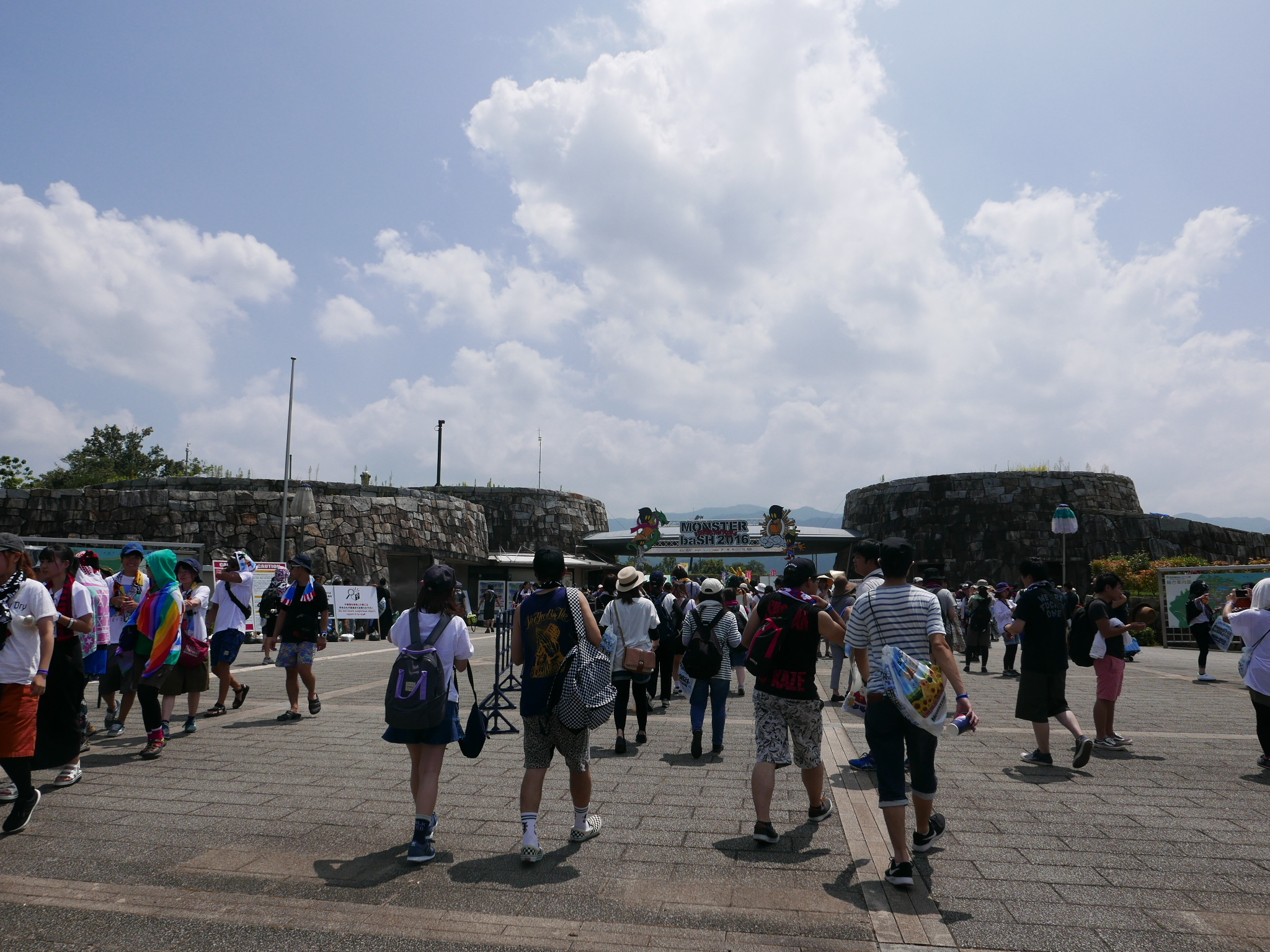 I could hear the music and the cheering from the crowd before I went in. 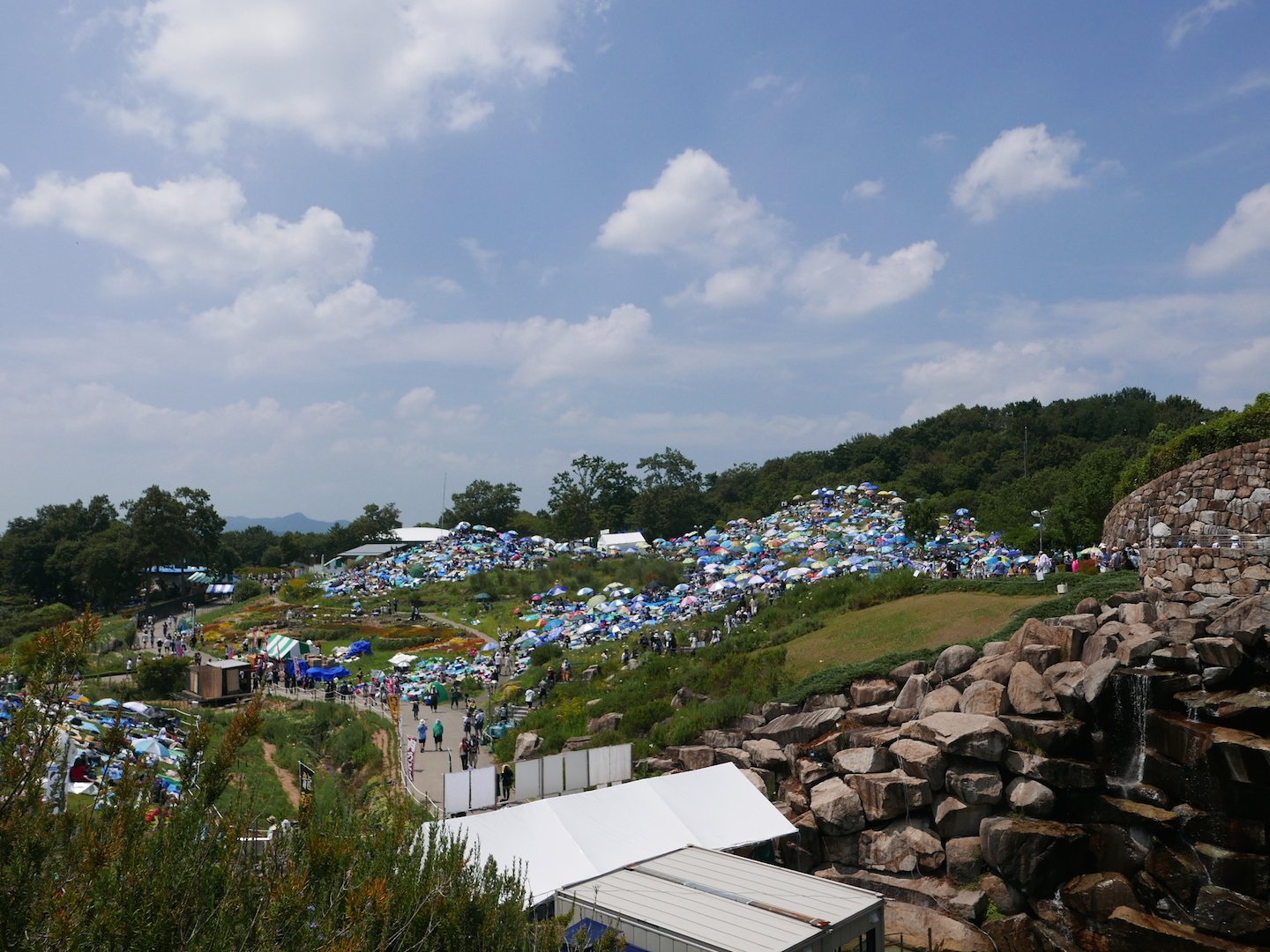 Sanuki Mannou National Government Park has a large hill. The standing area is just in front of the stage, while the seating area and the parasol area spread out over the hill in the back. A lot of people bring their own leisure seats and parasols. The number of the seats is limited and it may be fully occupied if you don’t come early. 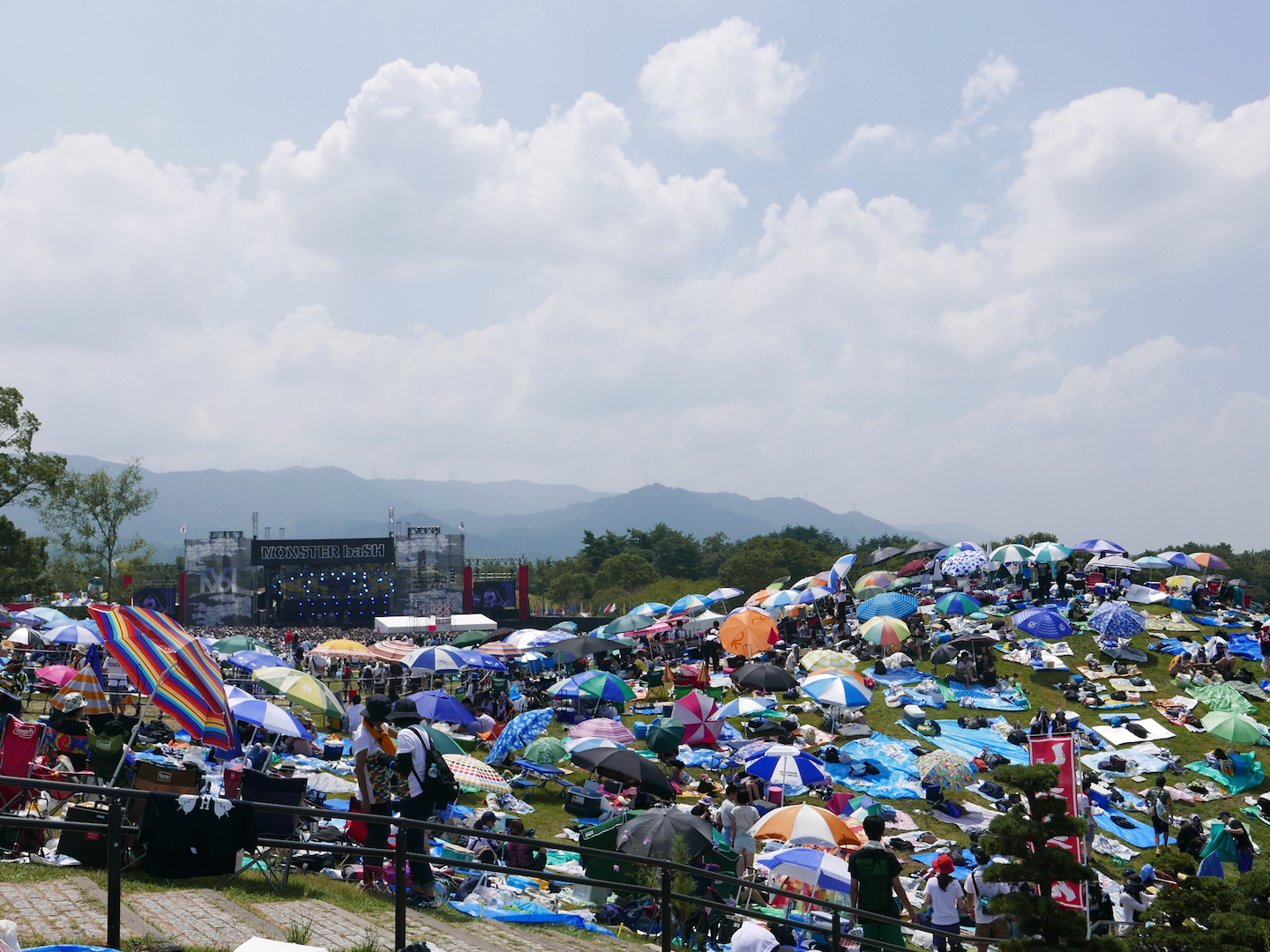 Once you go through the entrance, you will immediately find the main stage, Kūkai. The performers are mainly Japanese singers and rock bands. In 2016, following artists appear on the stage. ACIDMAN, BIGMAMA, Dragon Ash, KANA-BOON, MISIA, MONGOL800, ORANGE RANGE, THE BACK HORN and Sukima Switch. Some Japanese popular artists, such as ASIAN KUNG-FU GENERATION, back number, MAN WITH A MISSION, Perfume, Kyary Pamyu Pamyu and Qururi, also performed on this stage. 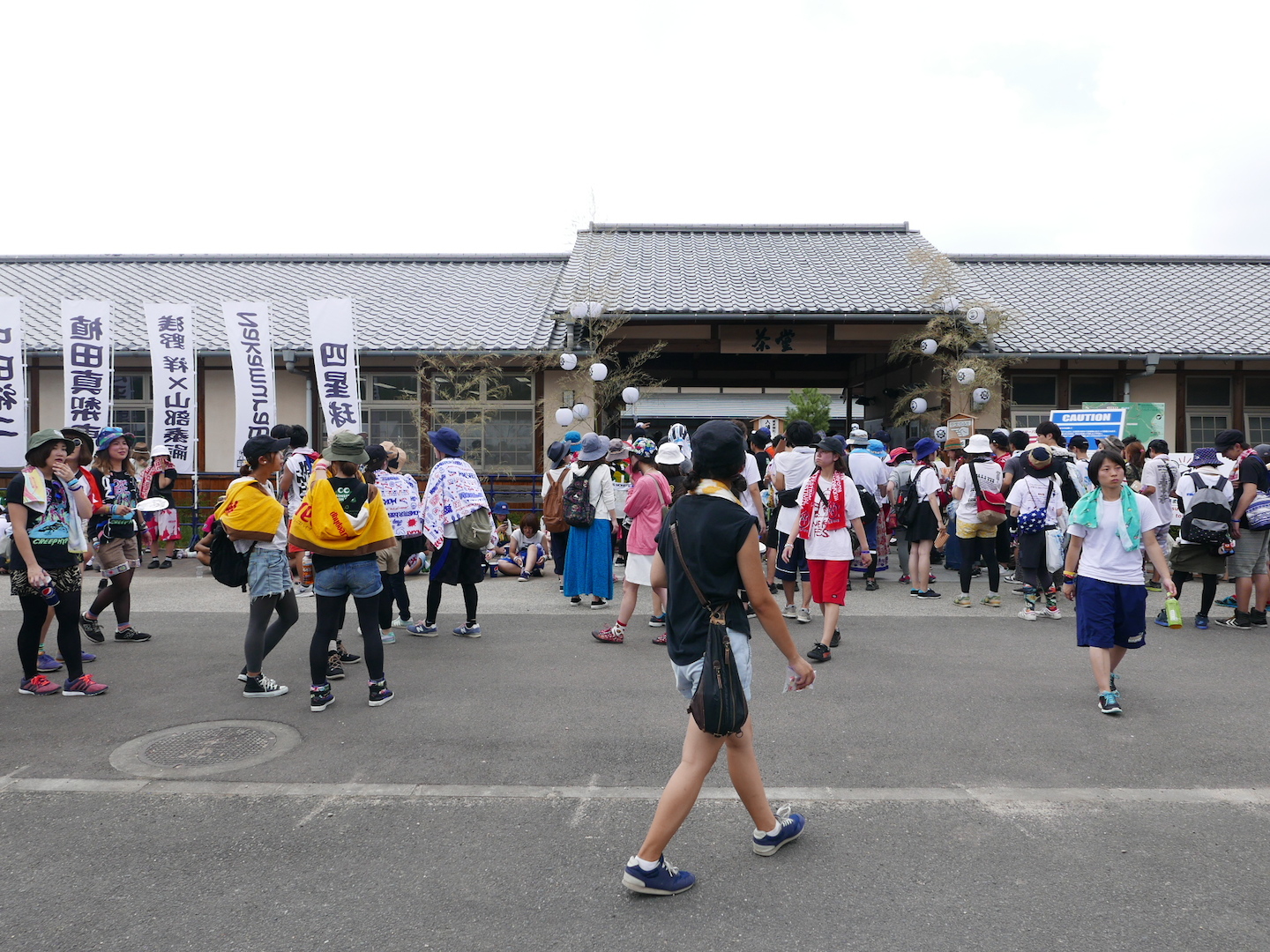 The new stage Sadou, premiering in 2012, is independent from the other two stages. It is a bit smaller than the others, but it might be a better choice for those who love slow acoustic music. 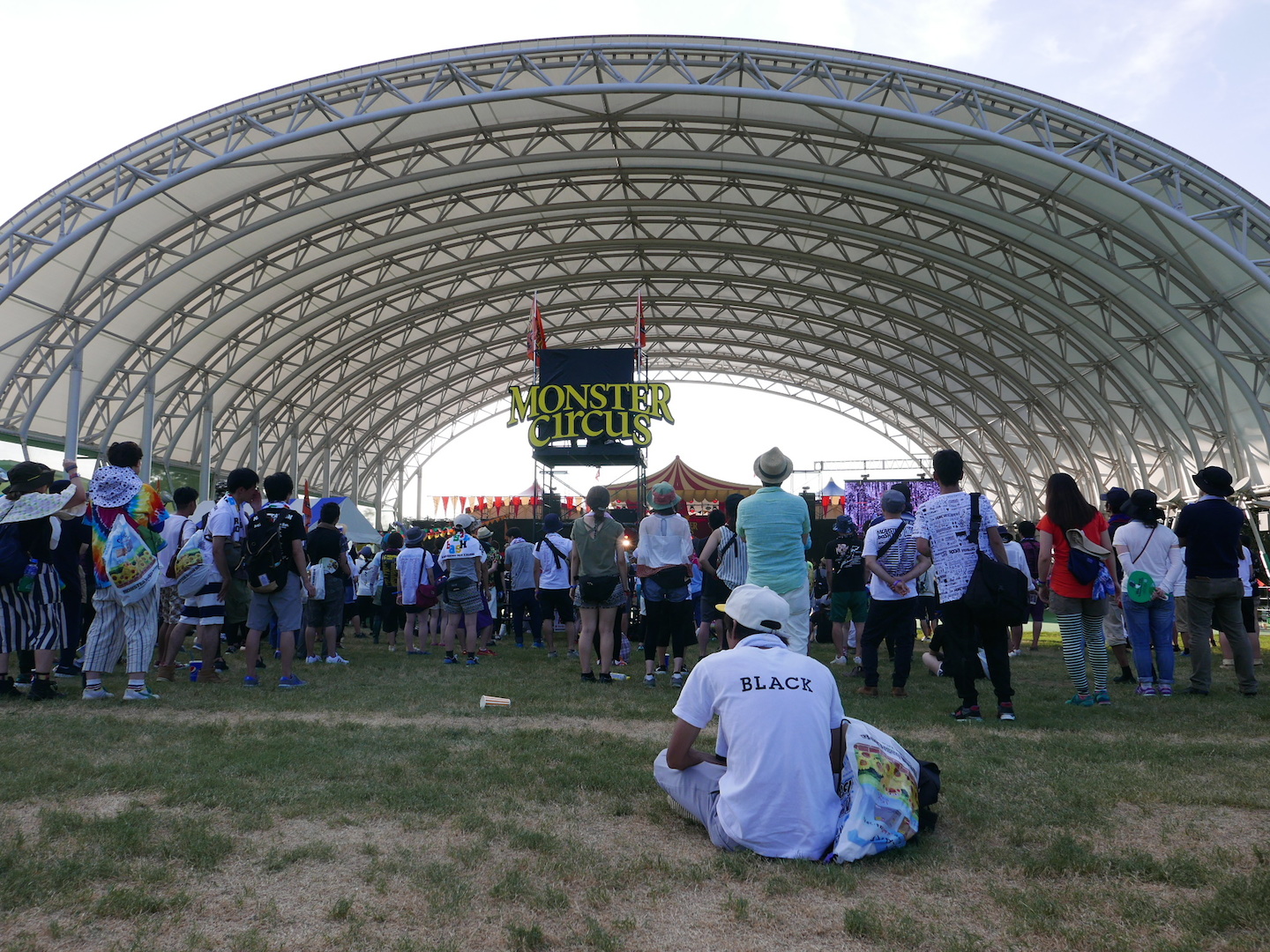 MONSTERcircus is another newly installed stage, which started in 2014. There is a food and drink area nearby, as well as craft markets and artist goods store shops around the stage. 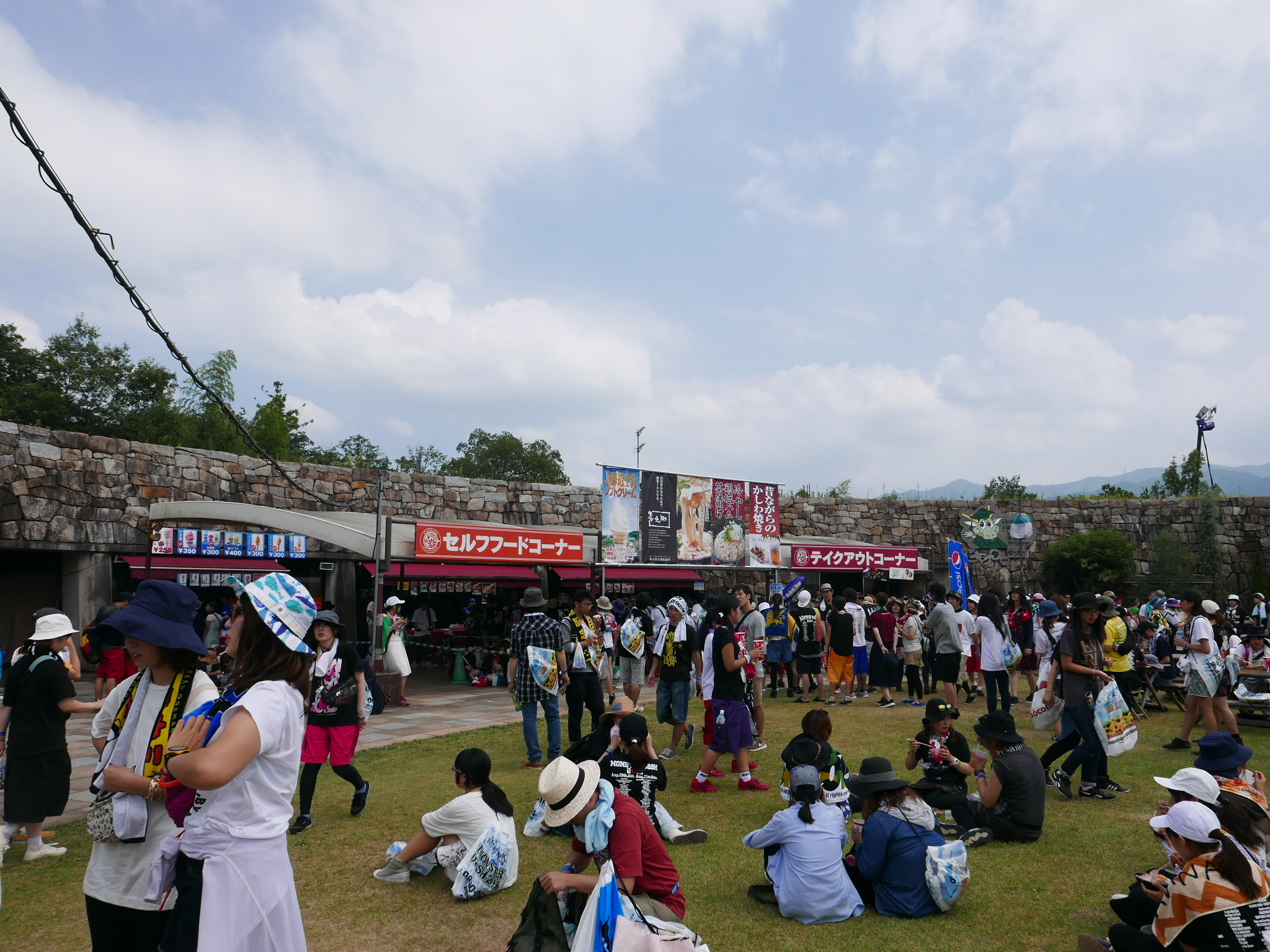 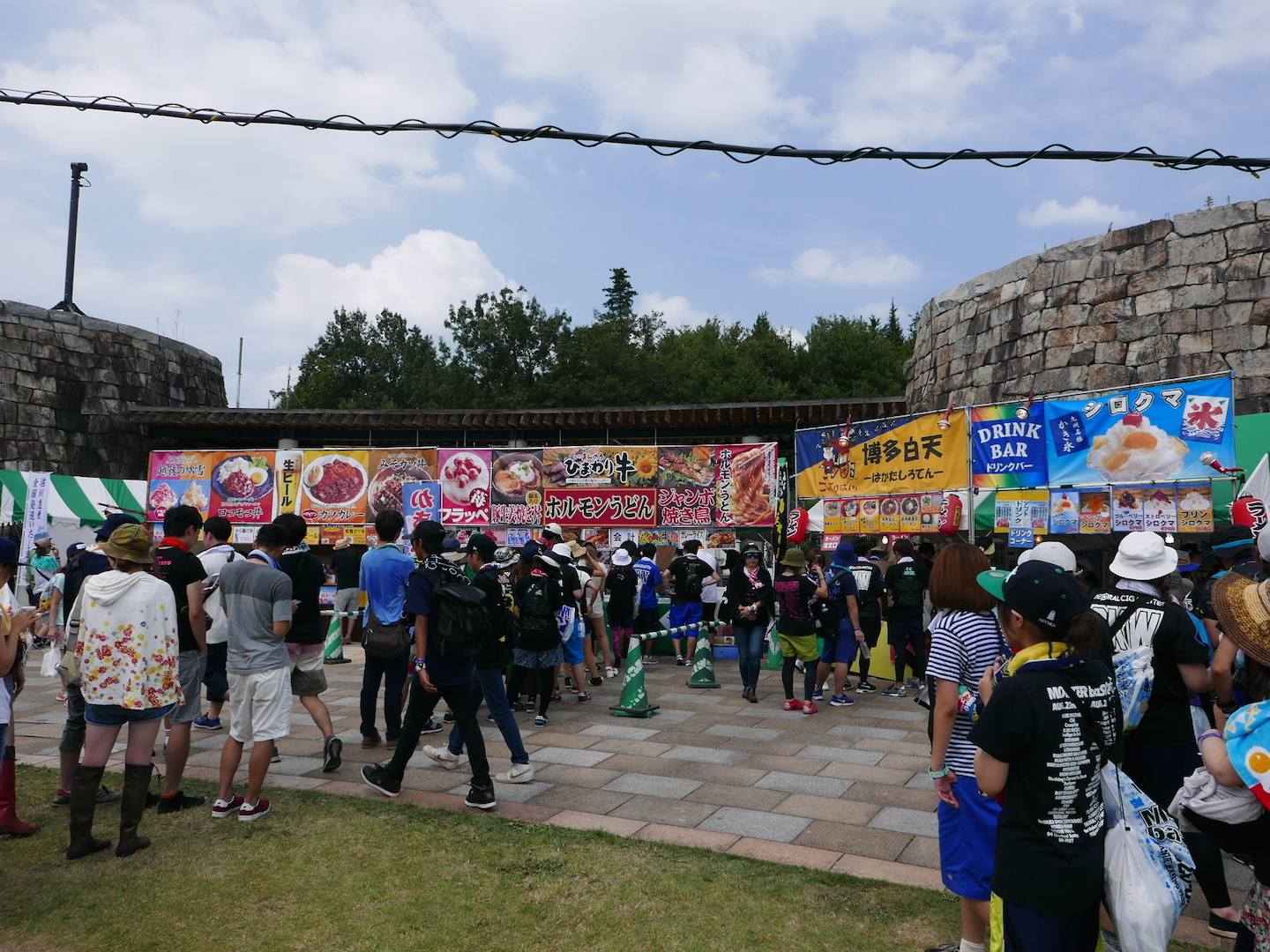 I highly recommend trying the food stalls while your favorite songs play in the background. Queuing to get food and eating it on the grass what makes music festival. 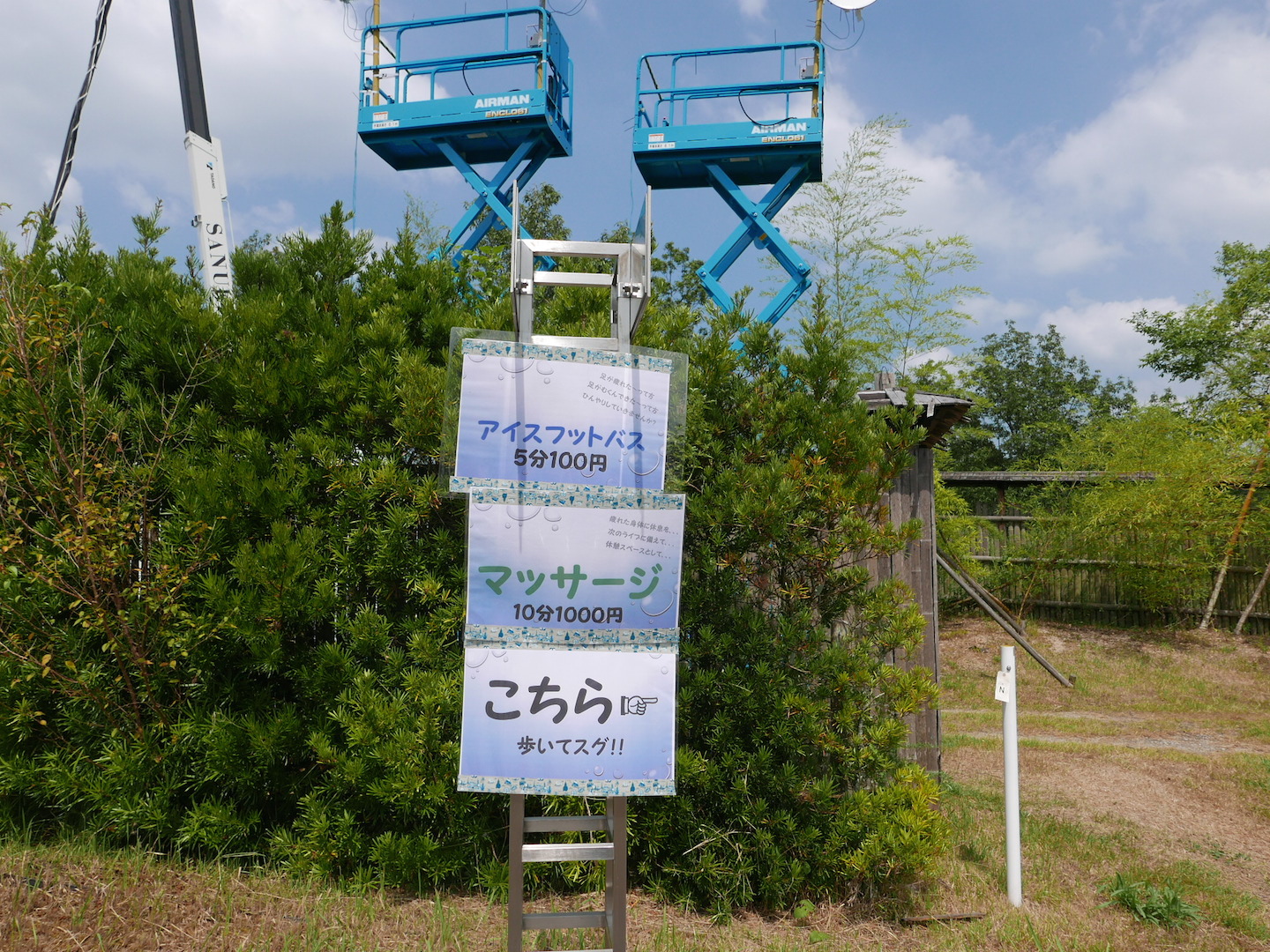 If it gets too hot, you can find places for an ice-cold footbath and massage. 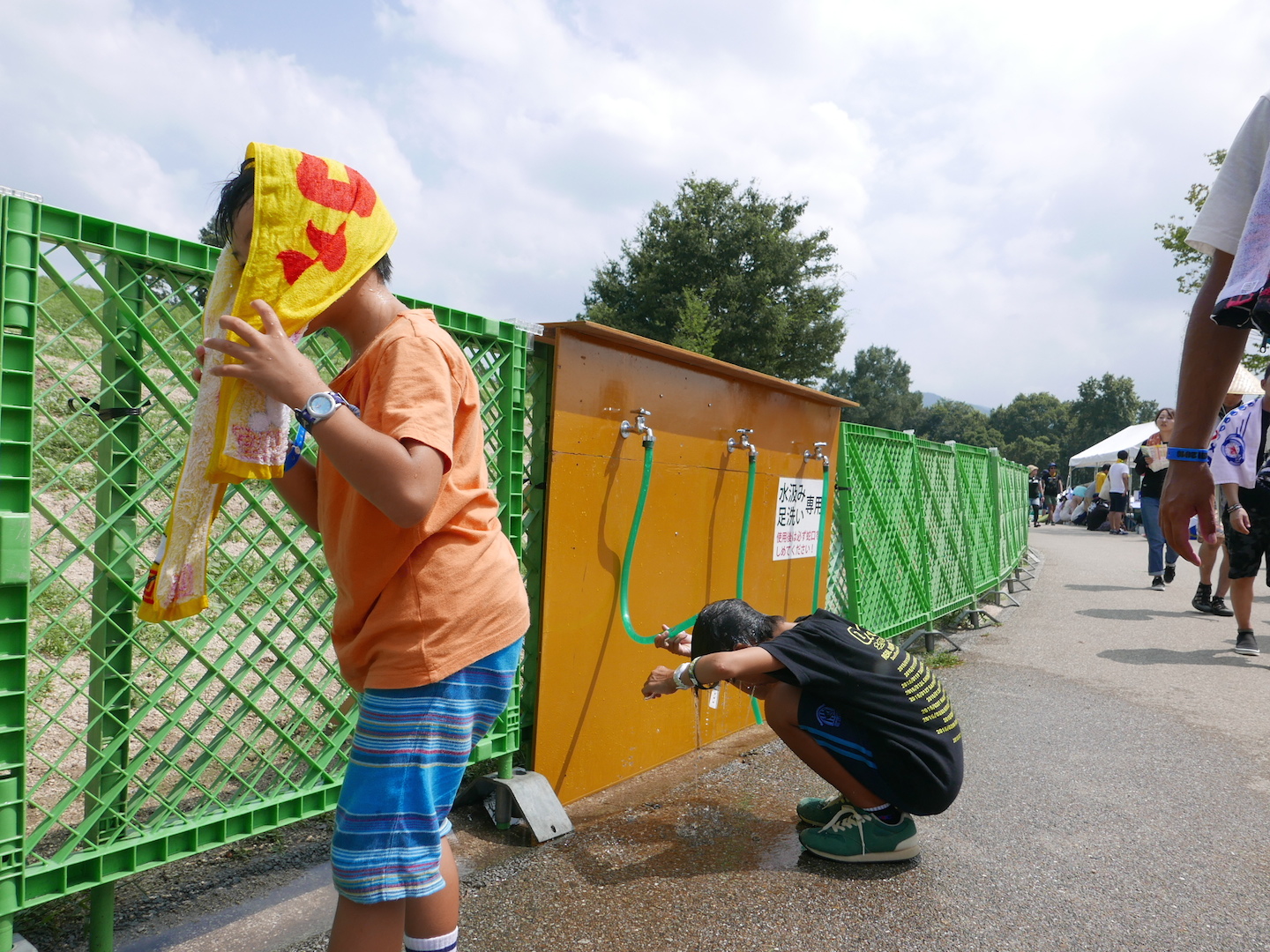 It was extremely hot in Kagawa at the end of August, so many people had to resort to soaking their towels and hair to cool down. 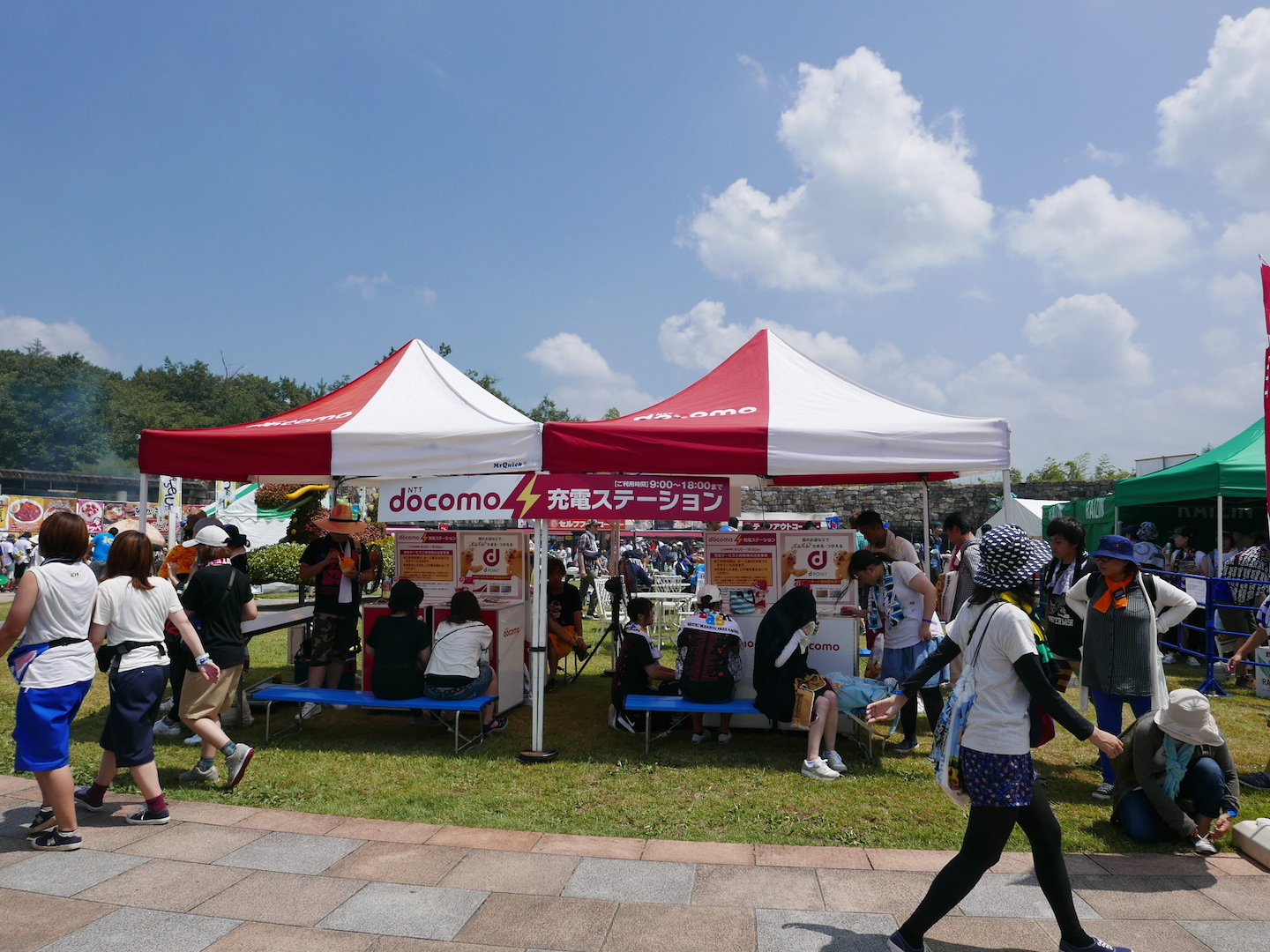 There are booths where you can charge your phone, so no need to worry if you forget to bring your mobile charger.

I saw some people not feeling well with the extremely hot weather during the festival, so make sure to wear thin and breathable clothes, bring towels and a hat to prevent sunburn and bring as few things as possible. Also, wearing comfortable shoes helps you move between each stage – remember that Sadou and MONSTERcircus are a bit far from the main stages. Last but not least, be sure to stay hydrated.