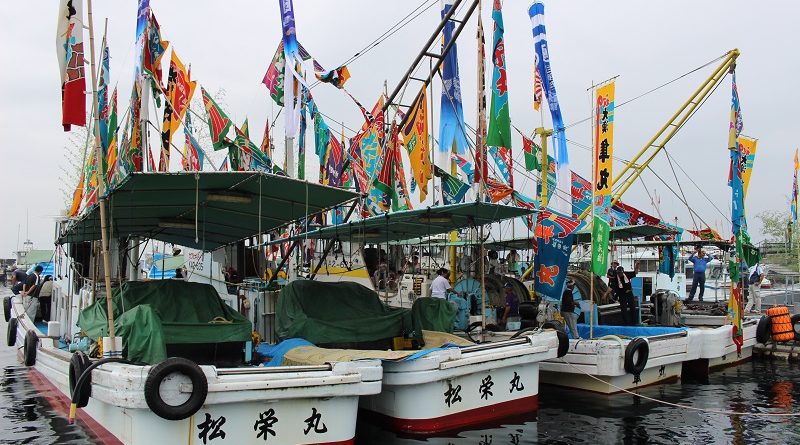 Ibukijima-island is known for producing and shipping high quality IRIKO (Dried sardines) to all across Japan. Of course, IRIKO is used in the soup of our famous Sanuki udon noodles.Also, the Ibujkijima-Island holds various festivals since before the Edo Period (1603). MIYOJINSAI is one of the traditional festivals in Ibukijima-Island which started by the ship called RYU-OH-MARU in 1959 and has been held every July until this day.

As for the transportation, the “ New-Ibuki Ferry” has been in service for about 40years, and runs from Kanonji-port to the Maura-port, which is located at south of Ibukijima-island. There are four ferries per day to Ibukijima (it takes about 25 minutes). Motorcycles and bicycles are allowed on board.Only the Kanonji to Ibukijima-Island route ferries are owned by the city (the other ferries in Kagawa prefecture are privately owned). 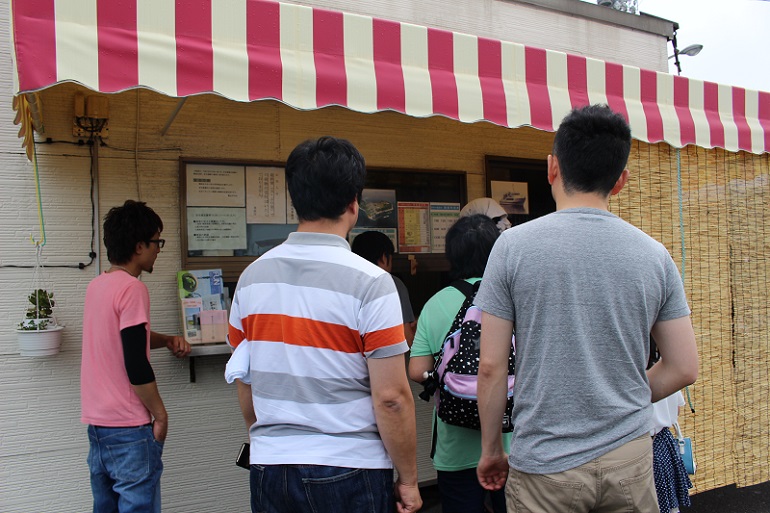 The ticket counter is located just in front of the departure gate. Lines of people were purchasing tickets to see the MYOJINSAI festival. 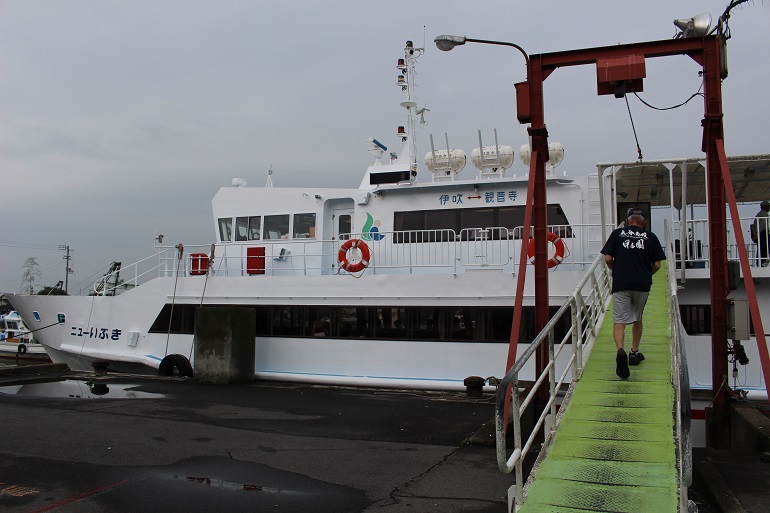 I got on the earliest ferry (7:50 am) to see the Festival from start. The weather was not that great but I was excited. 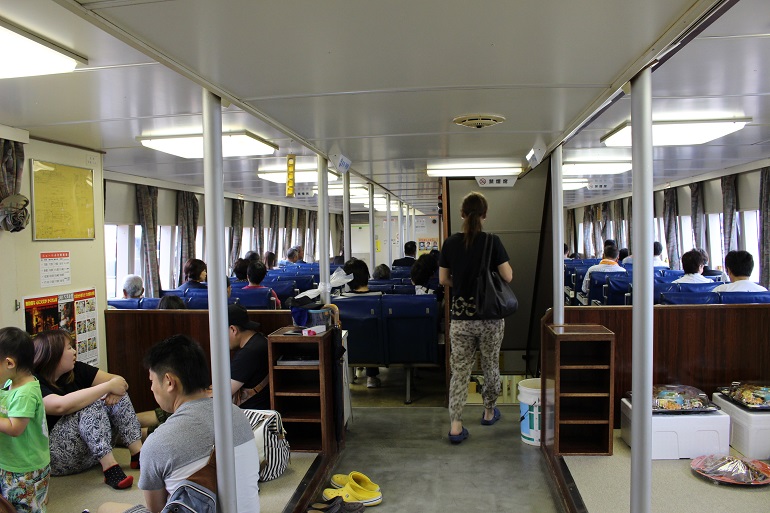 The ferry only took about 25 minutes get there and the Seto-inland Sea usually has calming waves and the ship was equipped with air conditioning, so there is no worry about getting sea-sick. 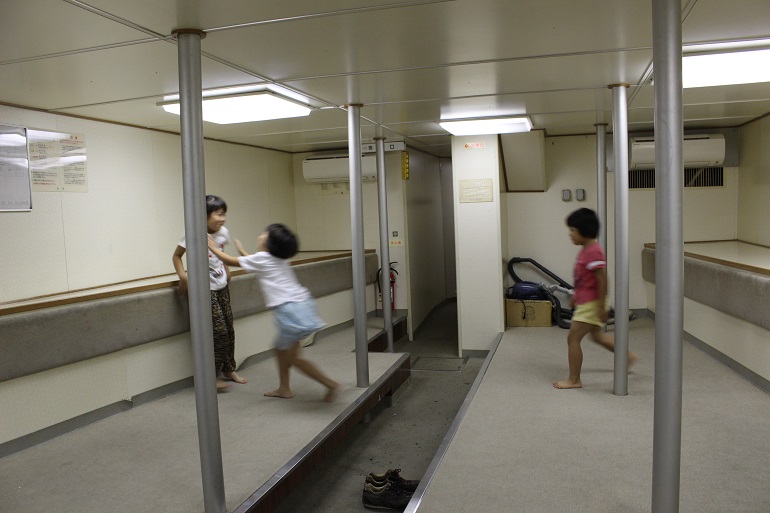 The ship was separated by three floors, B1, 1F and 2F. There is plenty of the space in B1 and kids were playing around. 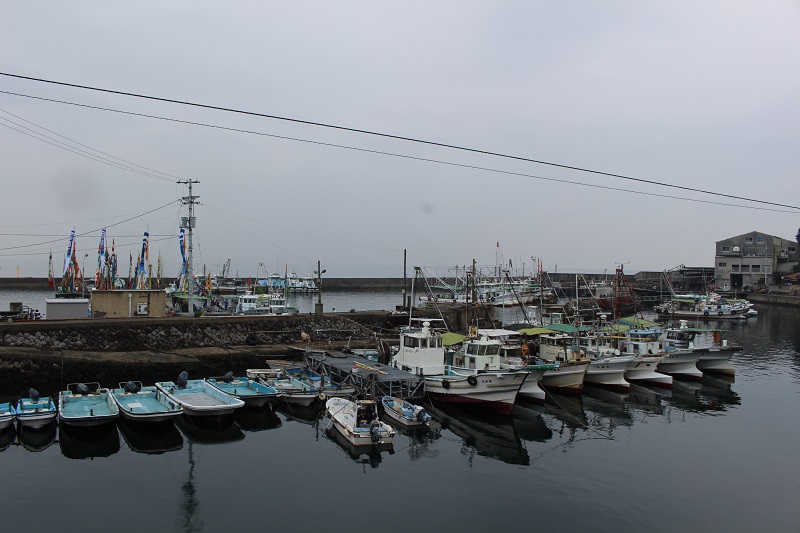 The port of the Ibukijima-island is filled with the fishing boats. No wonder the Island is famous for the fisheries. Japanese sardines are used for IRIKO (Dried sardines) and their fishing season is between June to August.There are 17 AMIMOTO (a fishermen bosses’) and usually a total of 4 ships are used together for their net fishing, for example, 2 main ships, a carrier and a sonar ship.
The island is surrounded by IRIKO factories and the sardines caught on their fishing boats will be shipped to the factory within 30 minutes by high‐speed carrier craft, which makes it a famous point for their high quality IRIKO. 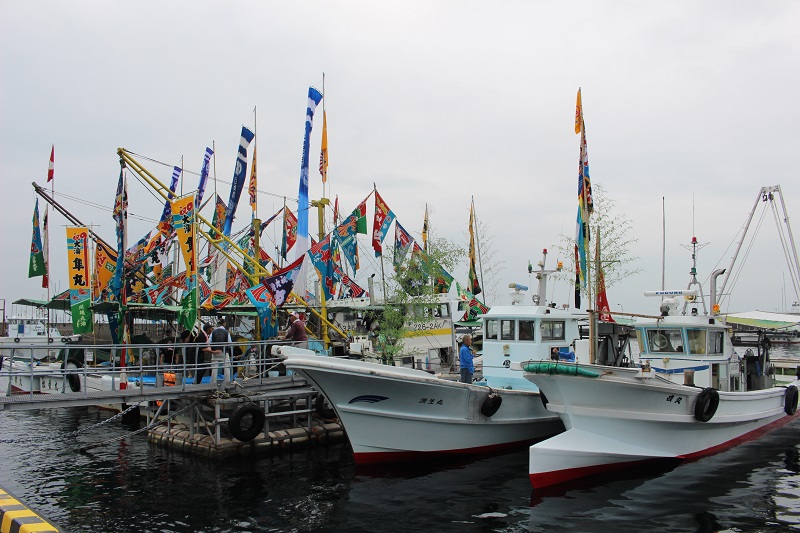 HAYABUSA-MARU and SHOUEI-MARU, the two mains ships which are used for this year’s festival, were anchored at the port. Luckily, I was able to be on board of the HAYABUSA-MARU during the festival. 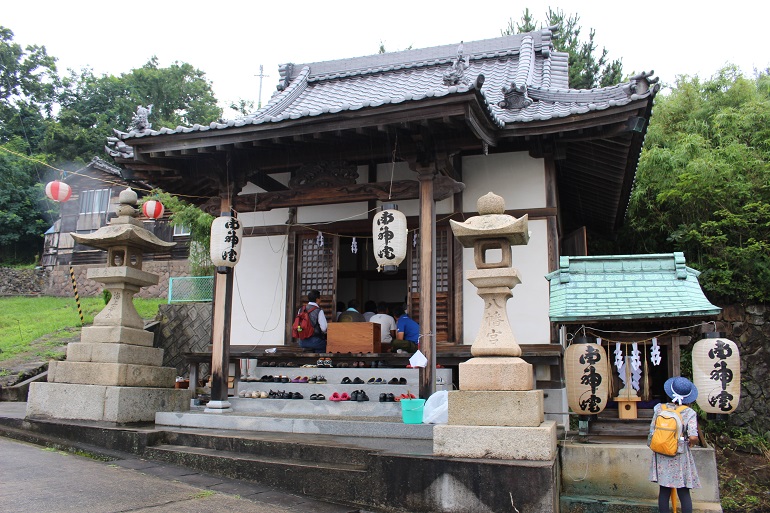 On the day of the festival, before the departure of ships, people performed a ritual at the shrine. 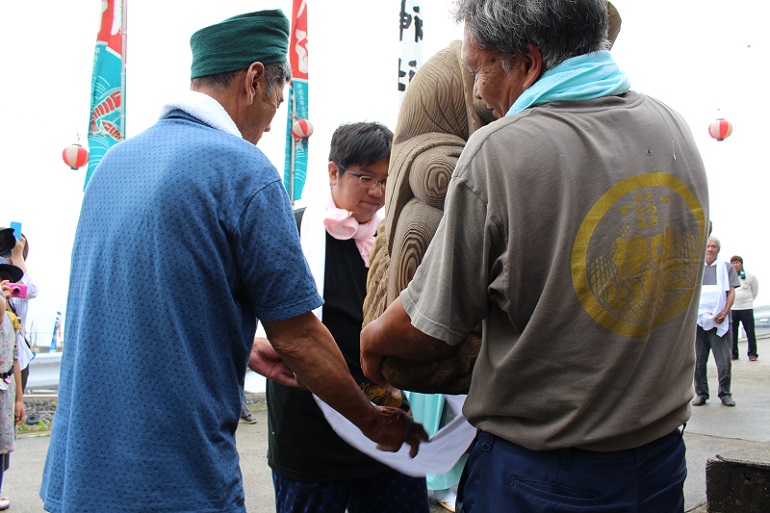 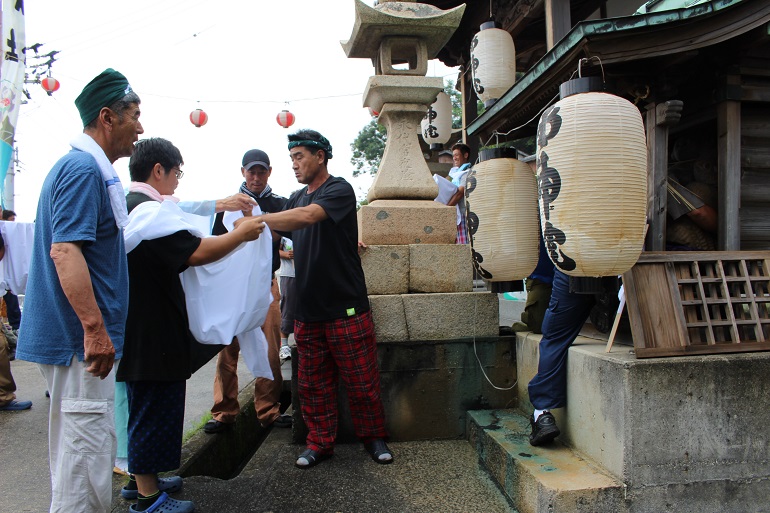 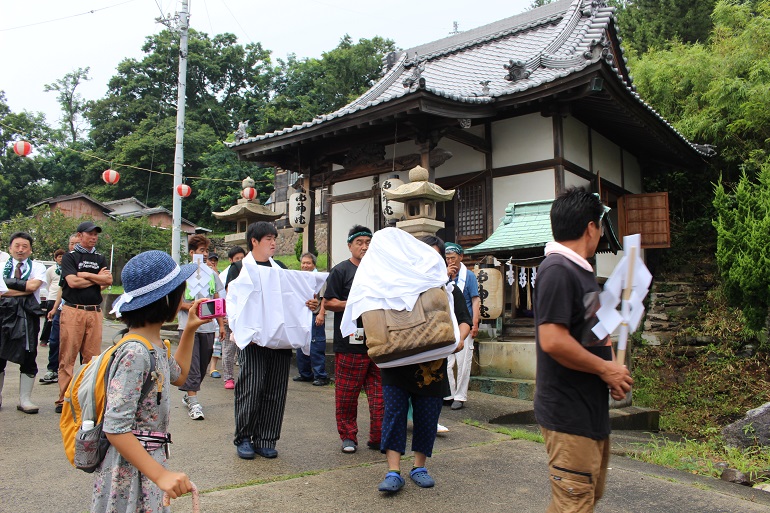 Only one day every year, the statue of Ebisu-sama is enshrined in the Shrine is brought out to be put on board. 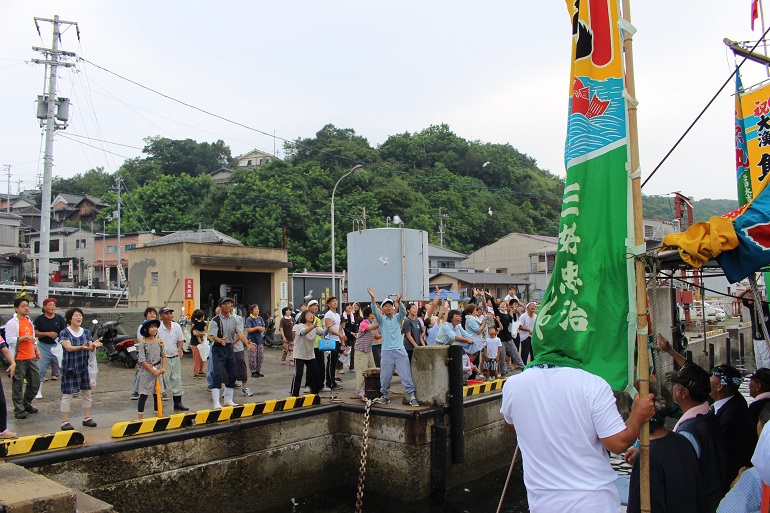 MOCHINAGE- A Japanese traditional event of scattering rice cakes for those who gather together on religious occasions (Shintoism), such as the ceremony of putting up the ridge beam of a new house, and so on. 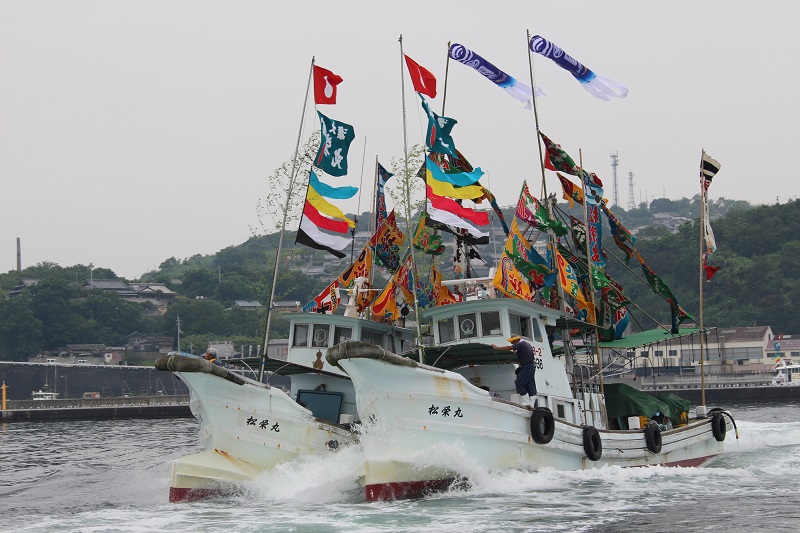 Now the time of the departure has come! 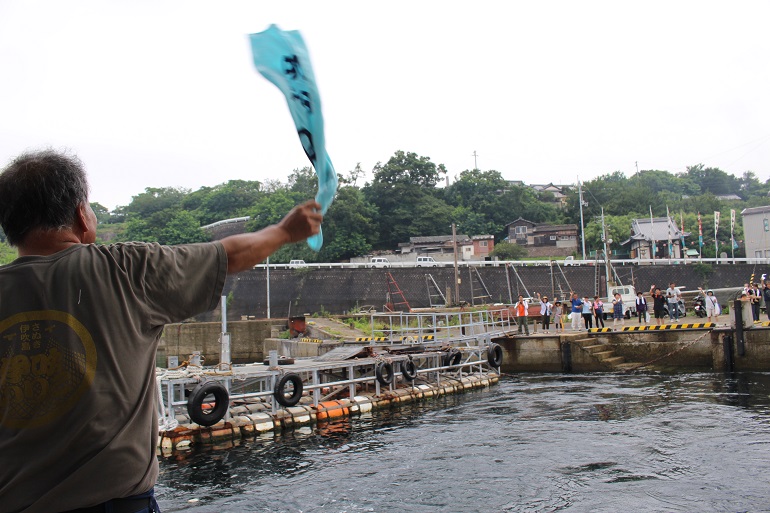 Swinging towels around from the ship to the people at the port means goodbye and showing faith to the Ebisu-sama at the same time. 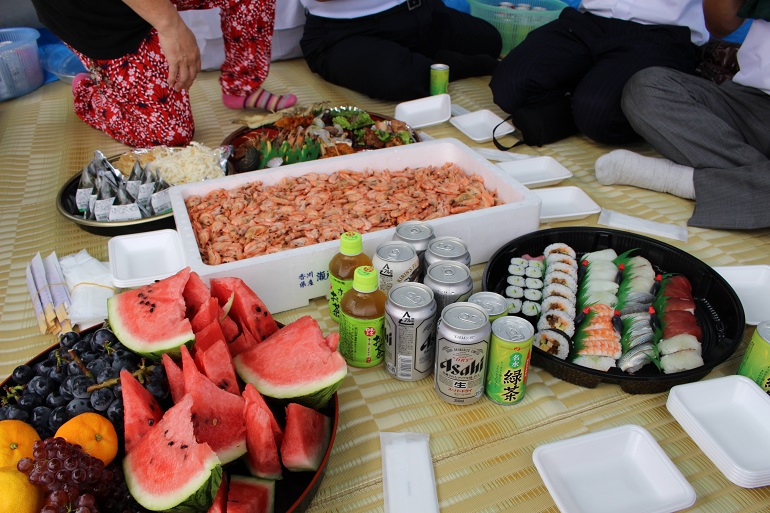 Splendid food and drinks are prepared onboard. According to the people from Ibukijima-Island, alcohol is a must item for any festival. 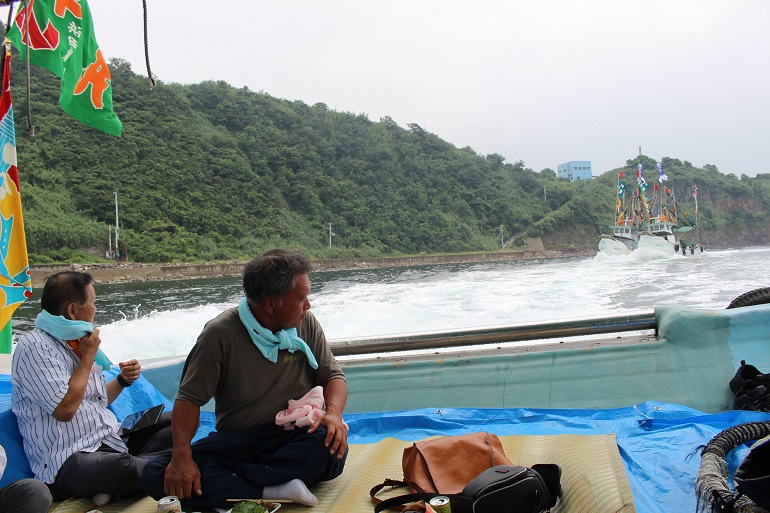 There are total of 7 Ebisu-sama statues enshrined at the Ibukijima-Island, Matajima-Island and Marugamijima-Island. As the activity of the festival, the ship circles widely counter-clockwise 3 times in the bay of each island to pray for the fisherman’s big catch. 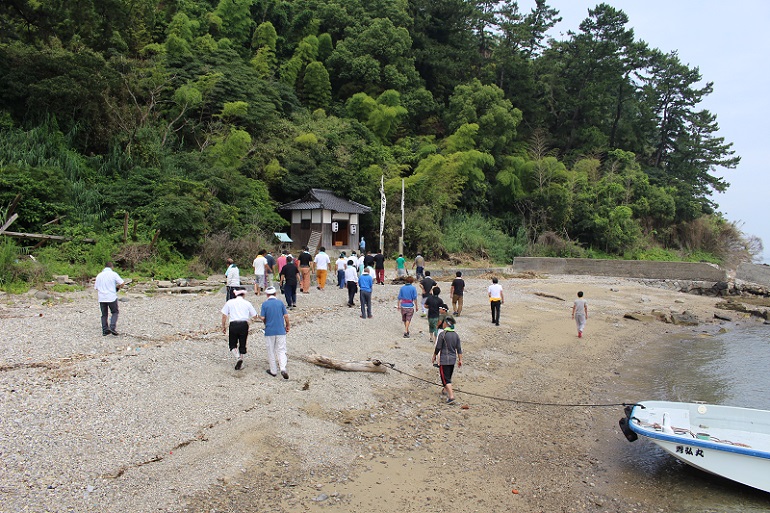 Matajima-island and Komatajima-island are located about 8km (About 5miles)  west of the Ibukijima-Island. People have to transfer to a small boat to go ashore Matajima to pray. 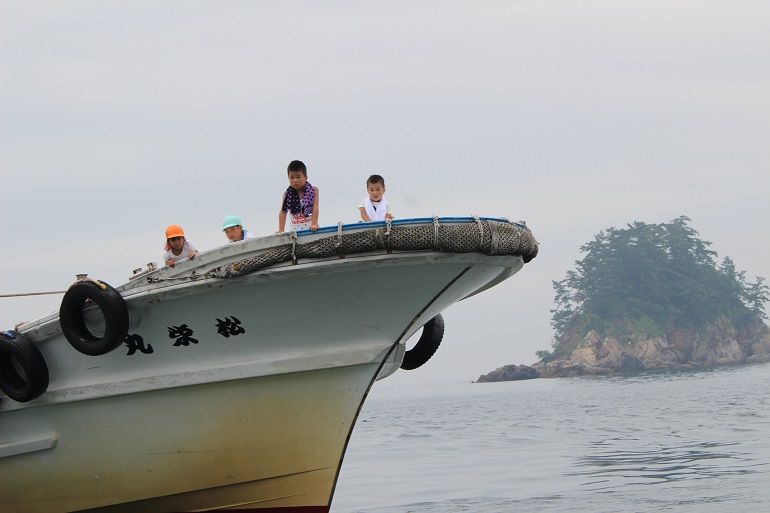 I bet that local island kids onboard will one day become fisherman, too. They look so dependable and brave. 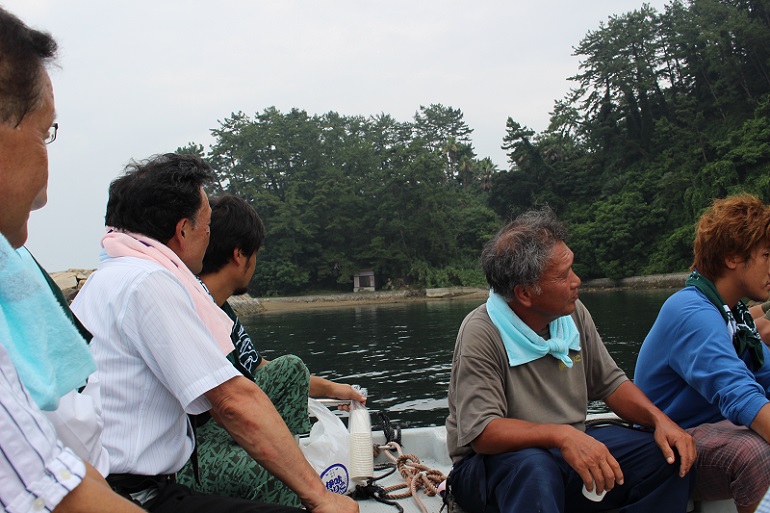 A shrine KONPIRA-SAMA has enshrined. Everyone prays for a fisherman’s big catch. 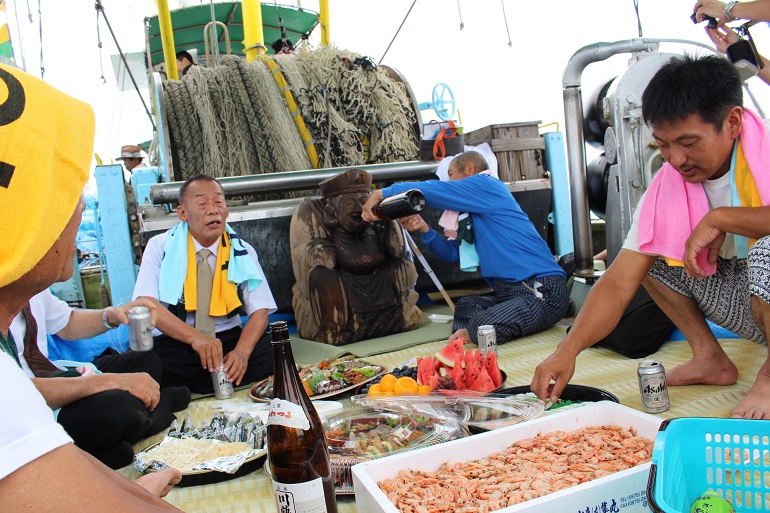 People keep on pouring Sake onto the Ebisu-sama statue, we guess He must be pretty drank, too. 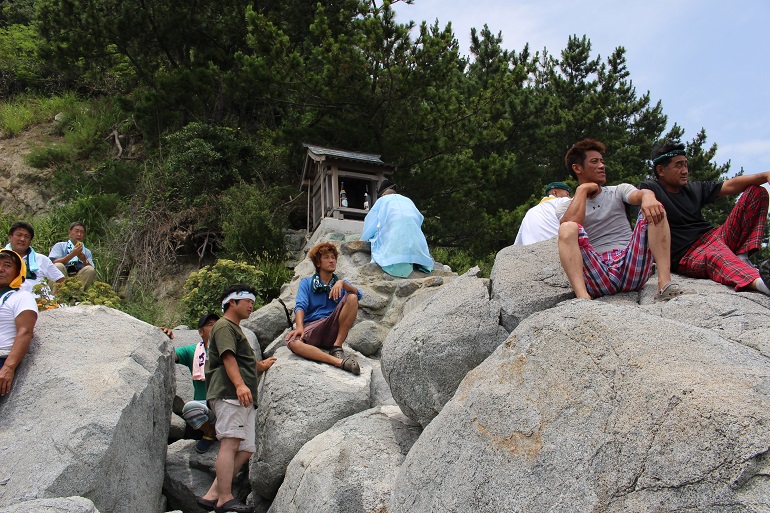 Coming ashore to the Marugamijima-Island located about 8km (About 5miles) north of the Ibukijima-Island, everybody prays for the big catch again. The place for praying was on the big rocks. Since they come to this place every year, they are so used to the walking on an unstable place like this. 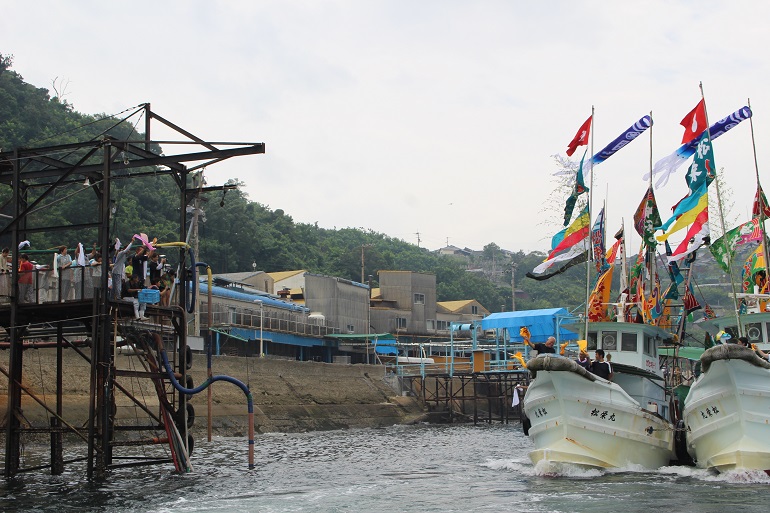 People at the port are waving and swinging towels around to welcome Ebisu-sama statue’s return. 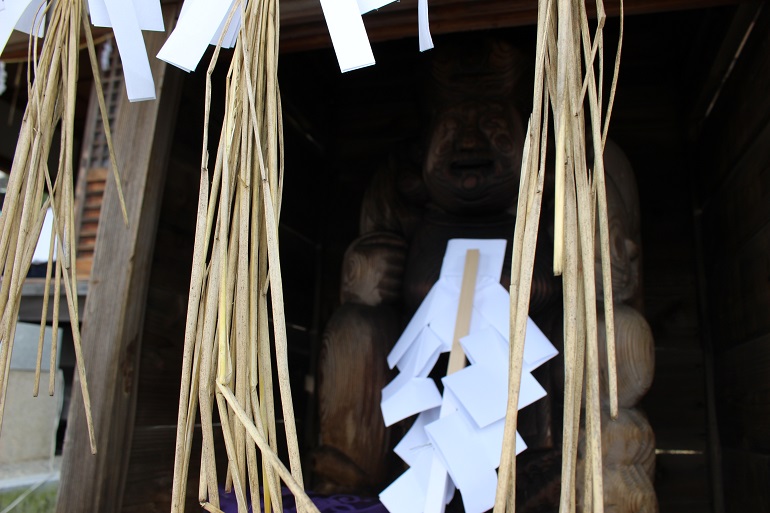 The Ebisu-sama statue, which arrived back to the Shrine, was soaking wet from the sake he drunk, but his beautiful woodgrain surface will appear again in couple hours and the usual scenery of the island will be back to normal as well.People at the Island went back their homes and all of the tourist went back to Kanonji port by ferry.

This was the essence the Japan‘s summers, and the exemplary Matsuri (festivals) of Japan. We have not felt such massive energy from people for such a long time.

Even after I got off the ship, experiencing such a powerful festival continuously kept me on pins and needles and I started the walk around Ibukijima-island, which I will continue in my next article.

Access
About 30 minutes walk from JR Kanonji Station to Kanonji port.Alternatively, a bus departs about every 2 hours or goes by taxi for about 800 yen.

There are four ferries per day, which departs from Kanonji port (which takes about 25minutes, 510 yen per adult and 260 yen per child).